It's hard to review the Huawei Watch.

It's not just because Android Wear, unlike Android on phones, is essentially the same across all watches. Some manufacturers install a few custom watch faces and apps, but what you get is basically what everybody else gets. Heck, all the new ones work with iPhones now, too, to an extent.

It's also not just that the internal hardware specs are virtually identical across the second generation of Android Wear watches. Most of them have fast enough processors and batteries that last a day. They've all got microphones for voice search and a little bit of storage for music — some even have GPS, but it's a rarity and not all that useful yet. The Huawei Watch sets itself apart with better materials (mainly a sapphire screen), but I'm not convinced it's worth it.

No, the Huawei Watch is hard to review because the thing that primarily differentiates an Android Wear watch is its design. And despite its round face and clean lines, I don't really like the look of the Huawei Watch as much as I like the new Moto 360. But I also know that many of my colleagues disagree with me — some of them vehemently.

The Huawei Watch is pretty — to some people. It's going to be useful — to the people who are able to find utility in Android Wear as it exists today. Starting at $349 with prices going all the way up to a gold-plated $799 version, it's also going to be expensive — to everybody. 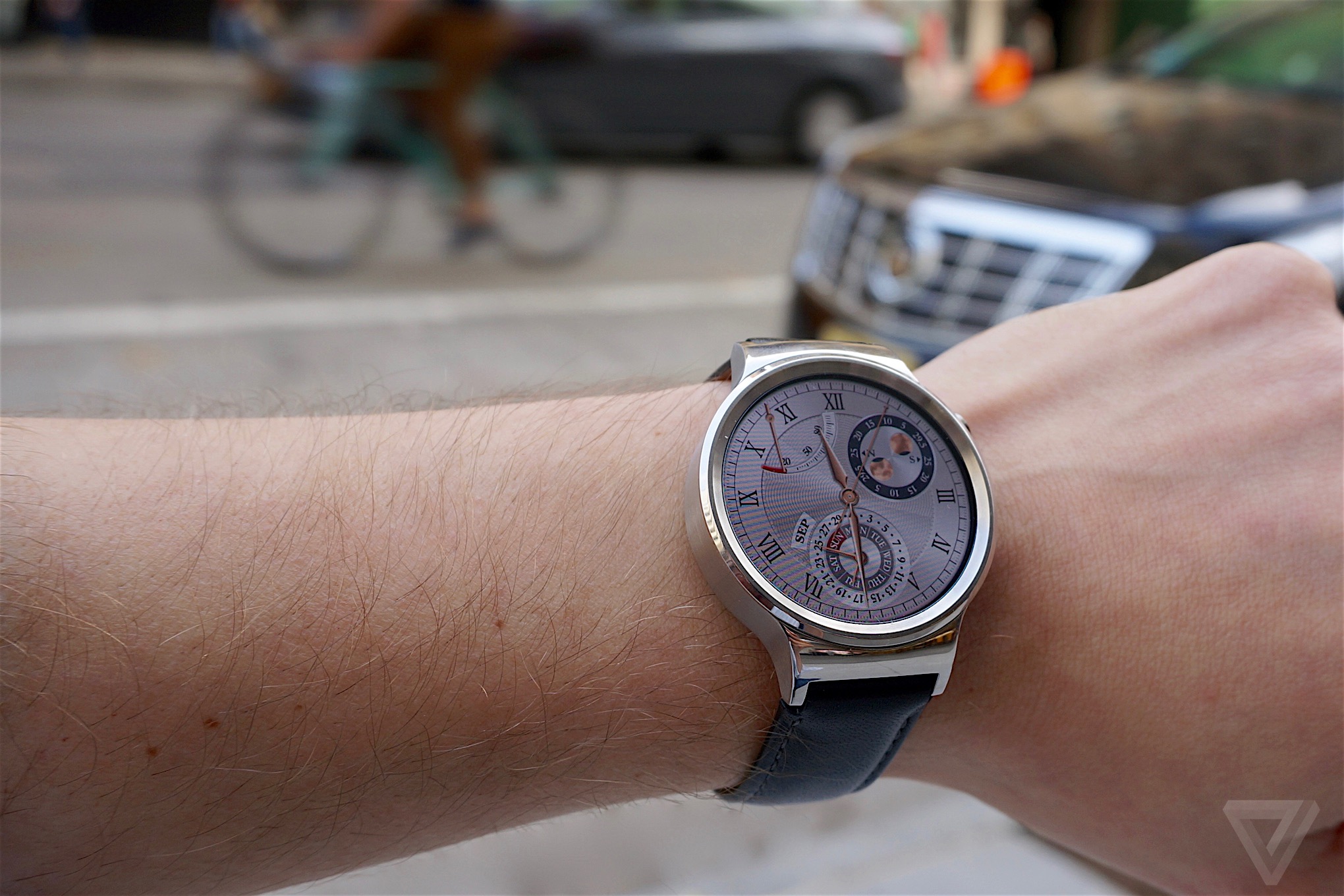 The Huawei Watch is a 42mm, round watch with a single button at the 2 o'clock position. Unlike the Moto 360, it doesn't have a "flat tire" cutting off the bottom of the screen; it's fully round. That does mean that there's a bezel around the screen, but it's not all that big. The screen is made of sapphire crystal, and it's 1.4 inches in diameter1. With the thin bezel, it manages to feel bigger and less computer-y than most of its Android Wear brethren.

Yes, I'm fully aware that Americans live in bizzaro world where we expect watch dimensions in millimeters and screen dimensions in inches. I didn't make this world, I just live in it.

Like a stack of silver dollars on your wrist

What does annoy me is the thickness, which is over a centimeter, 11.3mm to be precise. Combined with a brushed silver look, it looks nothing so much as a stack of silver dollars strapped to my wrist. Making a watch at this size feel like it's meant to be big isn't easy — you have to draw a balance between intentional ostentation and refined constraint. If you have small wrists, this thing is absolutely going to look silly on you.

Again, I personally think the balance is off here, but not so much so that I'll say you're wrong if you like it. I do think it can dress up or dress down depending on your wardrobe. It manages to achieve what the LG Watch Urbane utterly failed to: look like the expensive watch it's trying to be. Mainly, I think it's a handsome watch, but it's a slicked-hair and freshly pressed suit kind of handsome. More Gordon Gekko than Tony Stark.

Both Motorola and Apple have flooded their respective watch zones with a panoply of options: different sizes, different colors, different bands. Huawei only offers this one size, but you can get it in silver stainless steel (cold forged, Huawei very much wants you to know), black, or plated in rose gold. There are a few band options, too. The leather bands that come with the base version have convenient quick-release latches, but the black leather itself isn't especially special. I think most people should just opt for the base version and then go get a band they like. 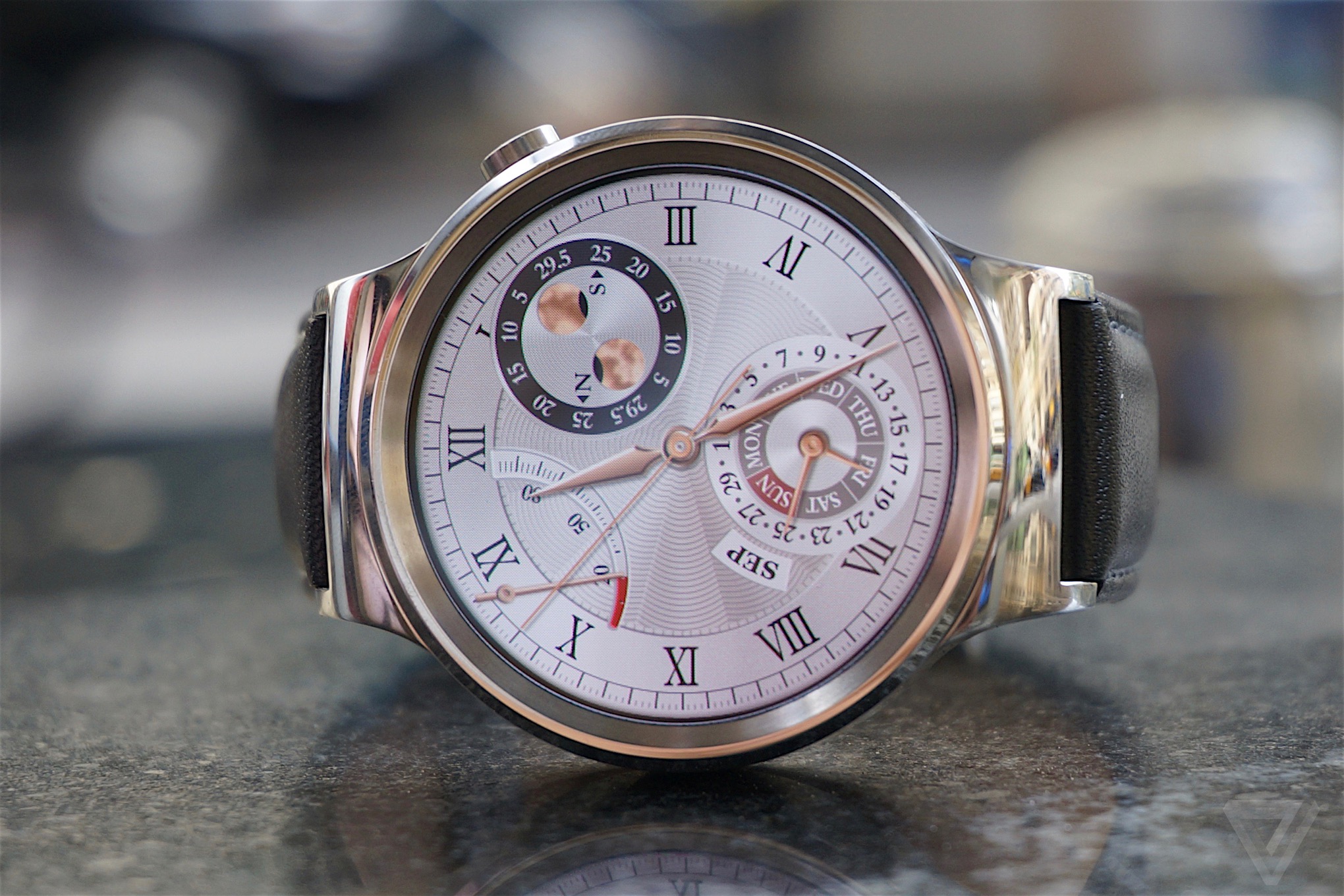 I said above that there's not much to differentiate Android Wear watches from a spec perspective, and that's basically true here. The screen is a 400 x 400 pixel AMOLED display that's viewable indoors or out. It's also aggressively viewable in darkness. There's no ambient light sensor here, and I find that incredibly annoying. Android Wear has a few features (brightness, theater mode) to help offset the eye-searing, movie-ruining glare of a fully lit smartwatch, but having to constantly toggle to them is a chore.

Say what you will about the Moto 360's flat tire, I'd rather have that than a watch that doesn't understand that it isn't supposed to double as a lantern.

Battery life is better than average for Android Wear watches, though that isn't necessarily high praise. Huawei claims it'll last a day and a half. While there were some days where I definitely reached that benchmark, most of the time I was still plugging in at night. But I never worried that I wouldn't get a full day. I especially like that I was getting that battery life even with the ambient display on. There's not a single smartwatch whose gesture-to-turn-on isn't infuriating, so it's nice to have a watch you can just glance at to check the time no matter what.

In terms of sensors, you've got the usual step counter, heart rate sensor, and apparently a barometer that can tell if you're climbing a mountain (I did not climb a mountain to test this). But if you're thinking about using this thing for any kind of serious fitness tracking, I exhort you to look elsewhere. The step counter is just as arbitrary as every other smartwatch I've used — which is to say, very arbitrary. More importantly, I think the size and looks of the thing aren't conducive to going for a jog. 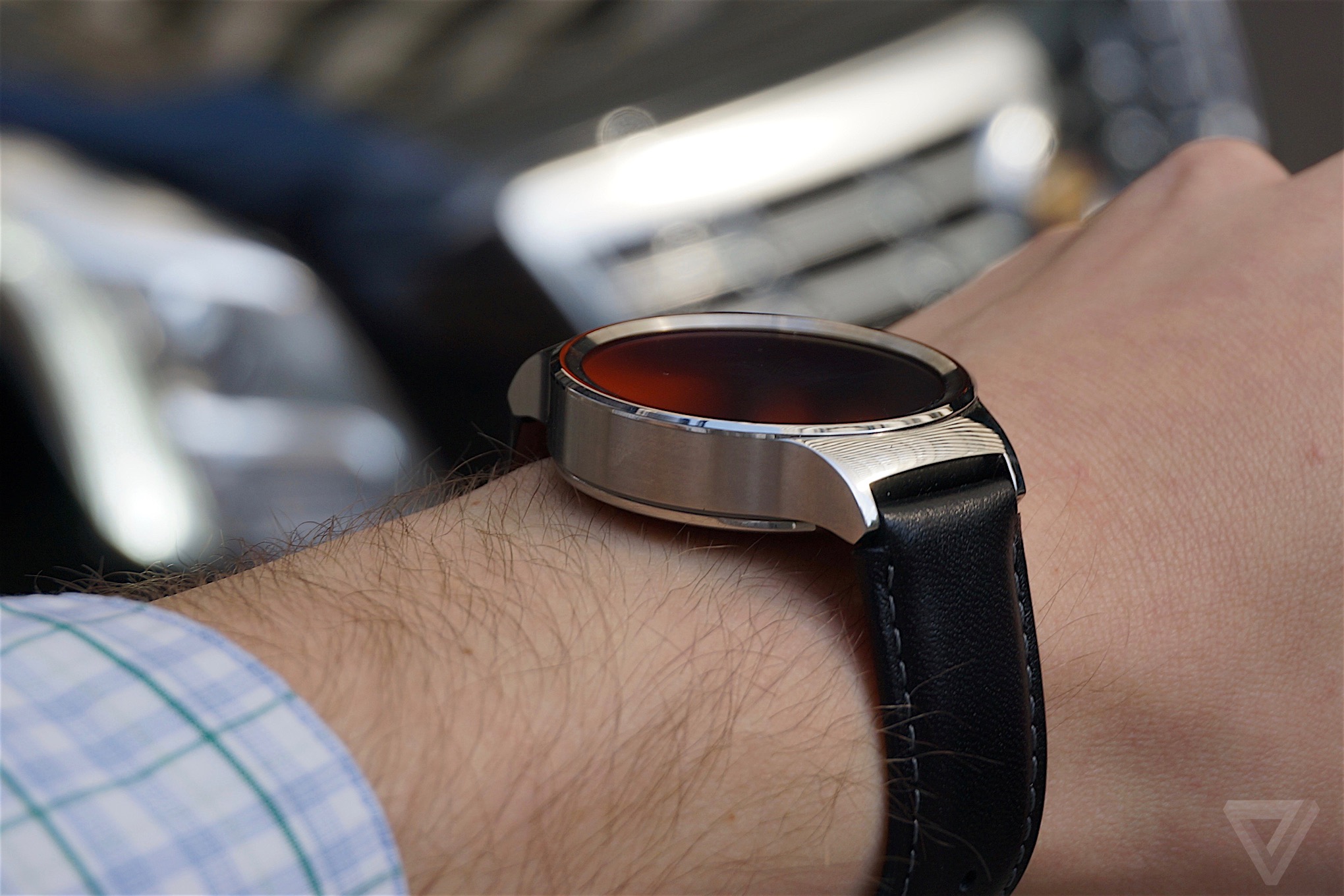 The place where Android Wear falls down a bit is in making the more advanced stuff easy to get to. Finding apps, messaging, and getting a watch face with the exact information I want requires too much hunting around either on the watch or in the Google Play store. Say what you will about the Apple Watch's overcomplicated interface and slow apps, it has an app ecosystem that already feels more vibrant than Android's despite the latter's head start.

The fix for that complication is to just give up and learn to love talking to your watch. I can't say I love it yet, but I do love that dictation is accurate and fast on the Huawei Watch. I also am beginning to get used to just quietly whispering to my wrist — it's less embarrassing than speaking out to the whole room that you need to remember to buy toilet paper. 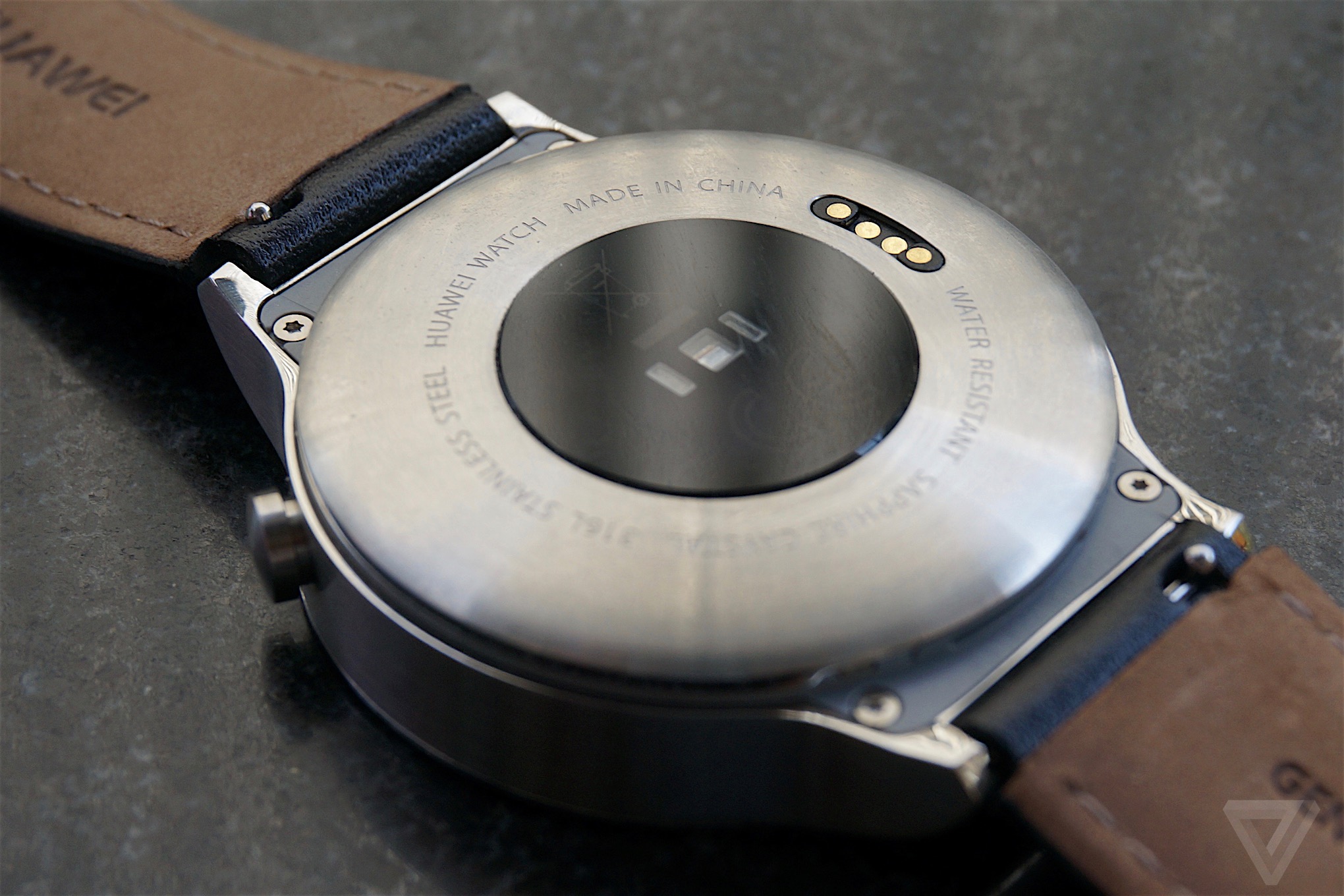 I kicked off this review by saying the Huawei Watch is expensive, which might strike some as odd. The base model of the Huawei Watch is the same price as the base model of the Apple Watch and about the same price as a similarly specced Moto 360. So compared to most of its direct competition, the price is not out of line. When you factor in the sapphire display, cost of the components, and better-than-average (but still not for me) looks, it seems downright reasonable.

Are smartwatches worth the investment yet?

But I'm still not convinced. If you're buying these watches for their computing ability, I feel like they're not really justified at this sort of cost. The Apple Watch pricing seems to have given the entire industry cover to start charging more for smartwatches, not all of it deserved. In his Moto 360 review, Dan Seifert wrote that, with smartwatches, you're paying more for the watch than you are for the smart. I agree.

People who want to spend $349 and up on a nice-looking watch can probably find something nicer-looking than this. People who just want the utility of a smartwatch can probably find something cheaper than this. The sliver of people who both like the look of the Huawei Watch and understand the capabilities and limitations of Android Wear seems perishingly small to me. If you're in that well-informed, nerdy, stylish, and relatively wealthy sliver, more power to you. If you're not, don't worry, the smartwatch business is still just getting started and you're not missing out on anything life-changing yet.

$349.99 at Huawei Official Store
Most Popular
From our sponsor
Advertiser Content From