It's easy to imagine what comes after the smartphone if you disregard modern physics. Displays wouldn't be rigid. They would bend and wrap and fold, and then fit nicely in your shirt's front pocket like a square of paper. They could expand from the size of a wristwatch to the length and width of a 10-inch tablet. A flexible display is a glorious idea — and one explored by many a Samsung concept video — but it hasn't taken off in the realm of consumer electronics. That's mostly because those types of displays are, at the moment, an engineering impossibility.

The Wove, a new prototype from flexible electronics company Polyera, can't do all of the above-mentioned feats, but it can bend. Polyera CEO Phil Inagaki has been convinced since 2005, when he founded the company shortly after graduating from Princeton with a degree in physics, that the displays on computing devices of the future would be continuously shapable by design. What makes the Wove interesting is that it clears the first hurdle required to construct a flexible computer: it's one of the first bendable touchscreen displays outfitted on a wrist-worn wearable. And it's coming out next year, the company announced today. 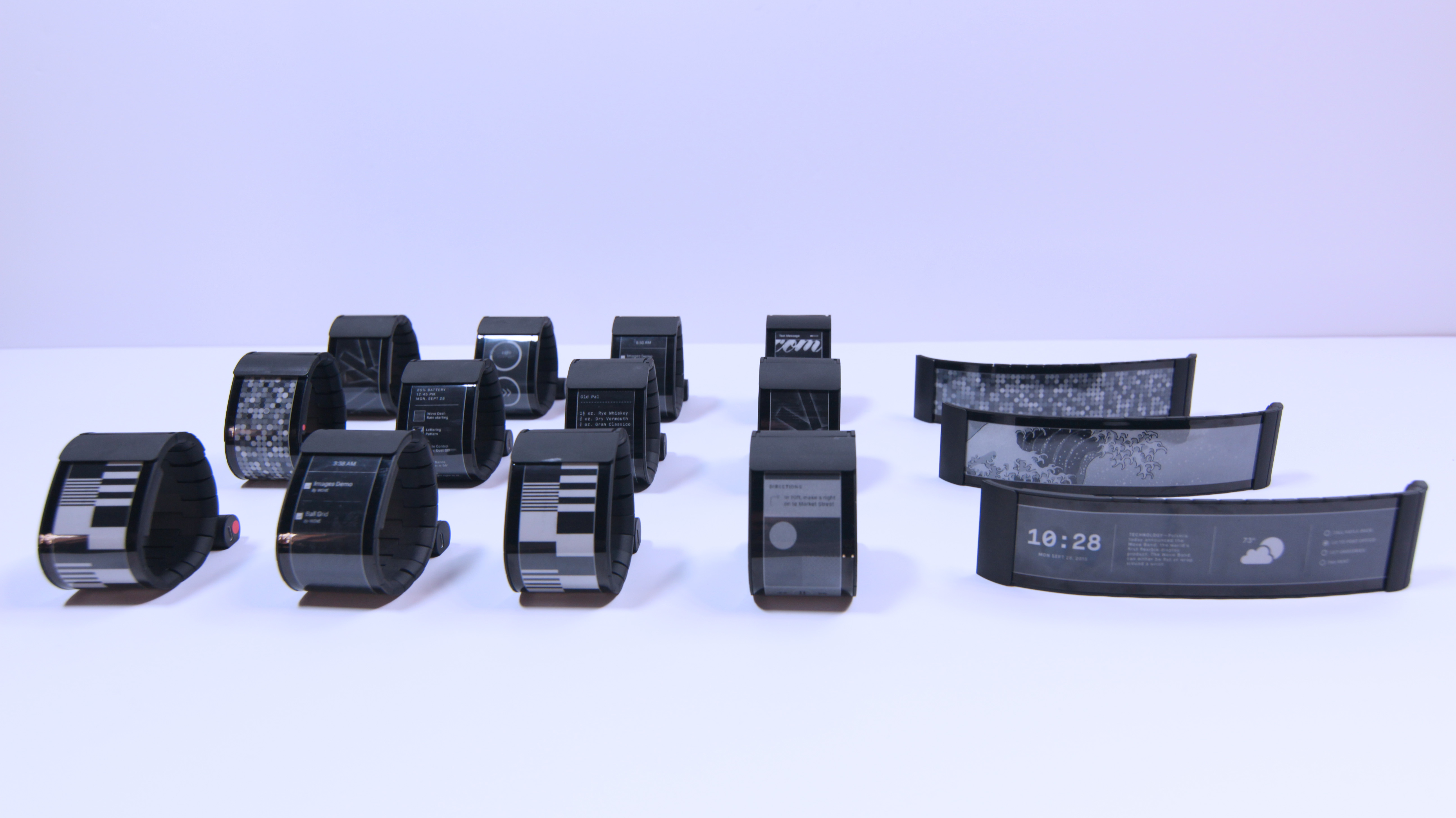 "People are pretty liberal with what they call a flexible display," says Inagaki. "Everything you see [on the market] has a fixed, rigid curve. What we’re doing is launching a product where the shape of the display will be changing in the consumer's hands."

Polyera got its start developing some of the first flexible transistors 10 years ago. It has since built its business around amassing patents for electronics breakthroughs and scaling up a manufacturing operation in Taiwan capable of producing components that can stretch and bend. The Chicago-based startup, with more than $40 million in venture capital funding to date, opened its San Francisco office last year to begin making the Wove a reality.

Inagaki thinks that consumers are ready for a wearable that is more a unique type of computer than it is a smaller version of a smartphone, especially now with products like the Apple Watch on the market. "We don’t like to think of this as a fitness tracker or a smartwatch with a larger display. It’s really about having a persistent, large display experience that is worn," he says. The Apple Watch display, he points out, is almost always off. Inagaki believes it mostly shrinks the smartphone experience to a 38-millimeter square.

"We want to pull out digital content and have it live on physical objects."

Polyera wants the Wove to be a device that accepts any kind of information or image from the web and lets it move in any fashion. "We want to pull out digital content and have it live on physical objects," he says. Rather than traditional apps, the company imagines "compositions" for the Wove’s display, which is designed to show a few at a time. For instance, a text message could pop up on the portion of the display accessible only by turning your wrist, letting you glance at notifications without the raising of the wrist to view smartwatch information.

The most obvious point of skepticism, however, is whether these types of devices will ever take off unless they’re coming from a large market leader like Samsung. The company has made serious investments in flexible display concepts and prototypes while letting less dramatic curve technology trickle down to products like the Galaxy S6 Edge smartphone. Of course, smartwatches haven’t yet taken off with a majority of consumers, with shipments totaling around 5.3 million globally in the second quarter of 2015, according to Strategy Analytics. So while Polyera is indeed going up against industry titans, it’s not marching into a well-established arena and trying to change entrenched consumer habits.

Starting in December, Polyera plans to send its next batch of prototype devices to developers, artists, designers, and anyone else interested in making software for the Wove or utilizing its shape shifting capabilities. Those interested can apply at Polyera's dedicated Wove website to receive a prototype for free.

Inagaki says Polyera is working with top app makers, but declined to specify any names. It's also not clear what added value the average consumer would get from a flexible display until there's a big developer community behind it, which is precisely why Polyera wants to round up as many early and talented prototype users as possible. The current composition ideas include app-like functions, from a clock that lets the Wove double as a bedside alarm to full wrist-length news readers. But whatever Wove's must-have software ends up being, it may need to be in place by next year for Polyera to sell a significant number of finished units.

The Wove runs a variant of Android, Inagaki says, and you’ll be able to load it with software using standard web languages, including JavaScript and HTML5. The Wove, at 33mm wide, has a similar width to the Apple Watch, but the display stretches out for 156mm around your wrist, while the band can be adjusted removing or adding links. Under the hood, Polyera packed its current prototype with 4GB of storage, 512MB of memory, and a 1GHz ARM Cortex-A7 processor. For now, the Wove band must be paired via Bluetooth to an iPhone or Android handset.

The device has an E Ink touchscreen display at the moment, as will the first consumer version Polyera says it will begin selling by mid 2016. The company declined to specify how much it will cost at launch, but Inagaki confirmed it would be "less expensive than the cheapest Apple Watch." He also says that the color display is not far off, and neither are different shapes and sizes the Wove will take in the future as Polyera expands its product line.

"Once you have this fabric that is this persistent, more natural, print-like material that you can put in all sorts of forms," Inagaki says, "we really it think will be extremely powerful." 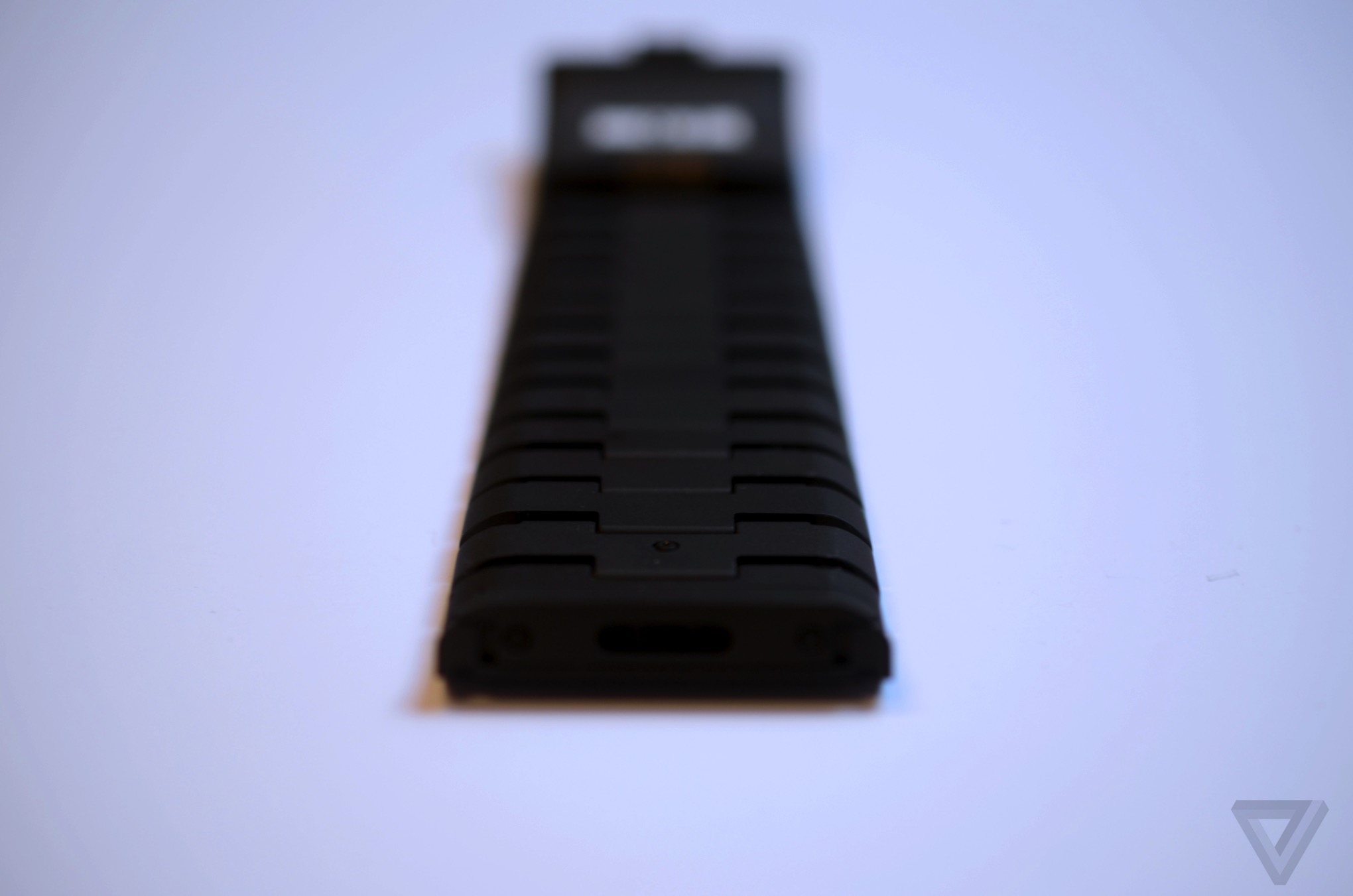 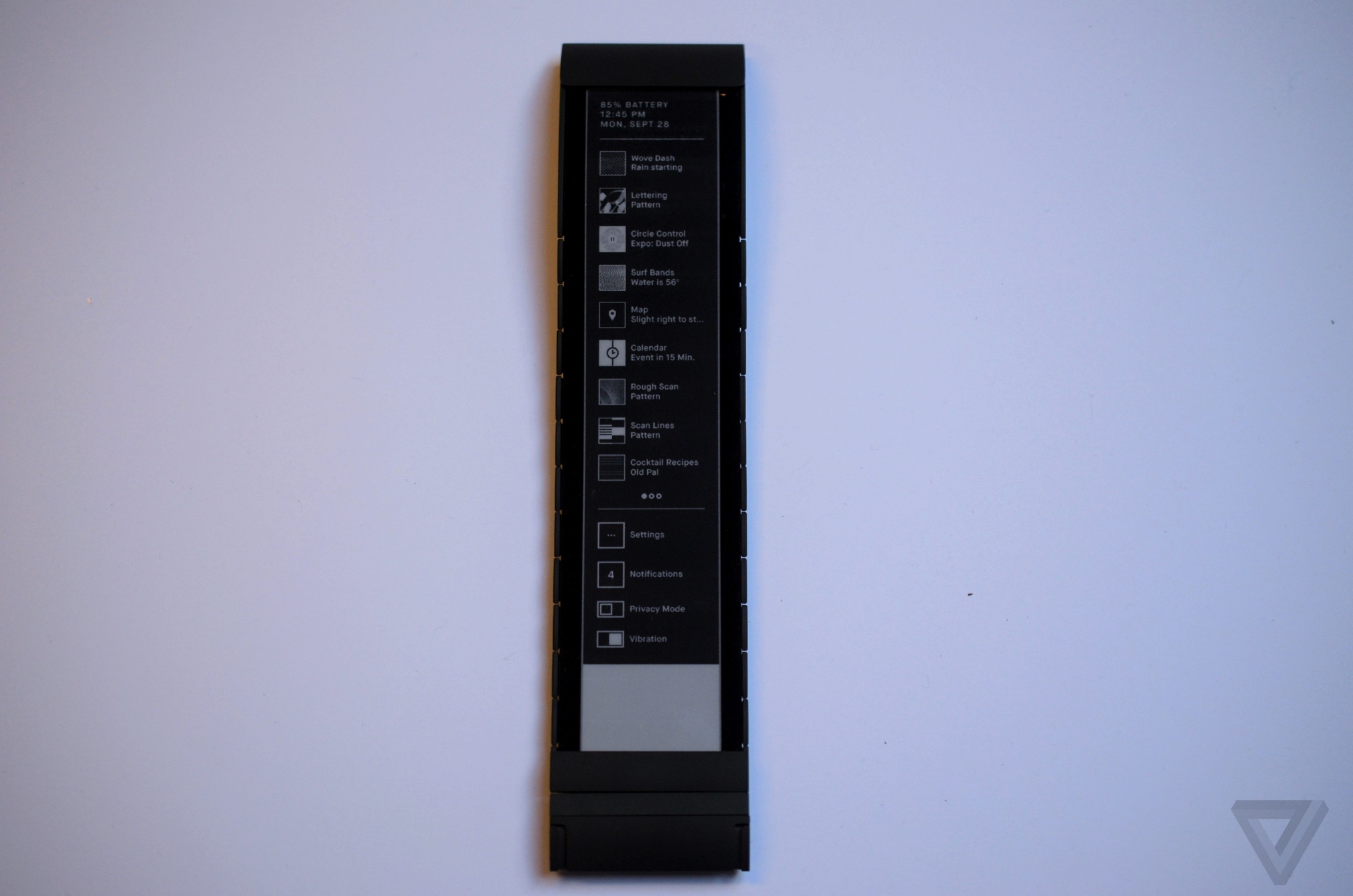 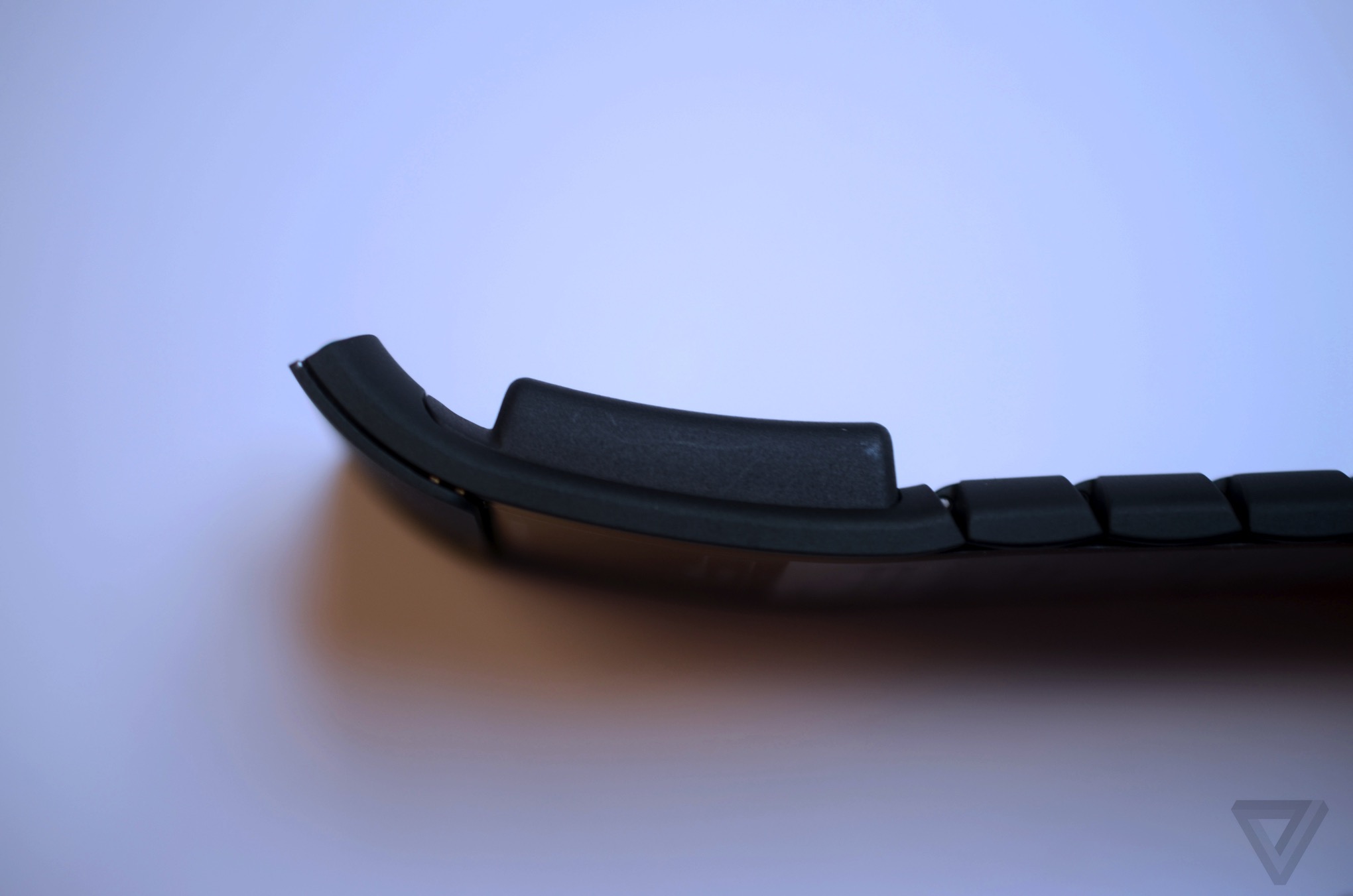 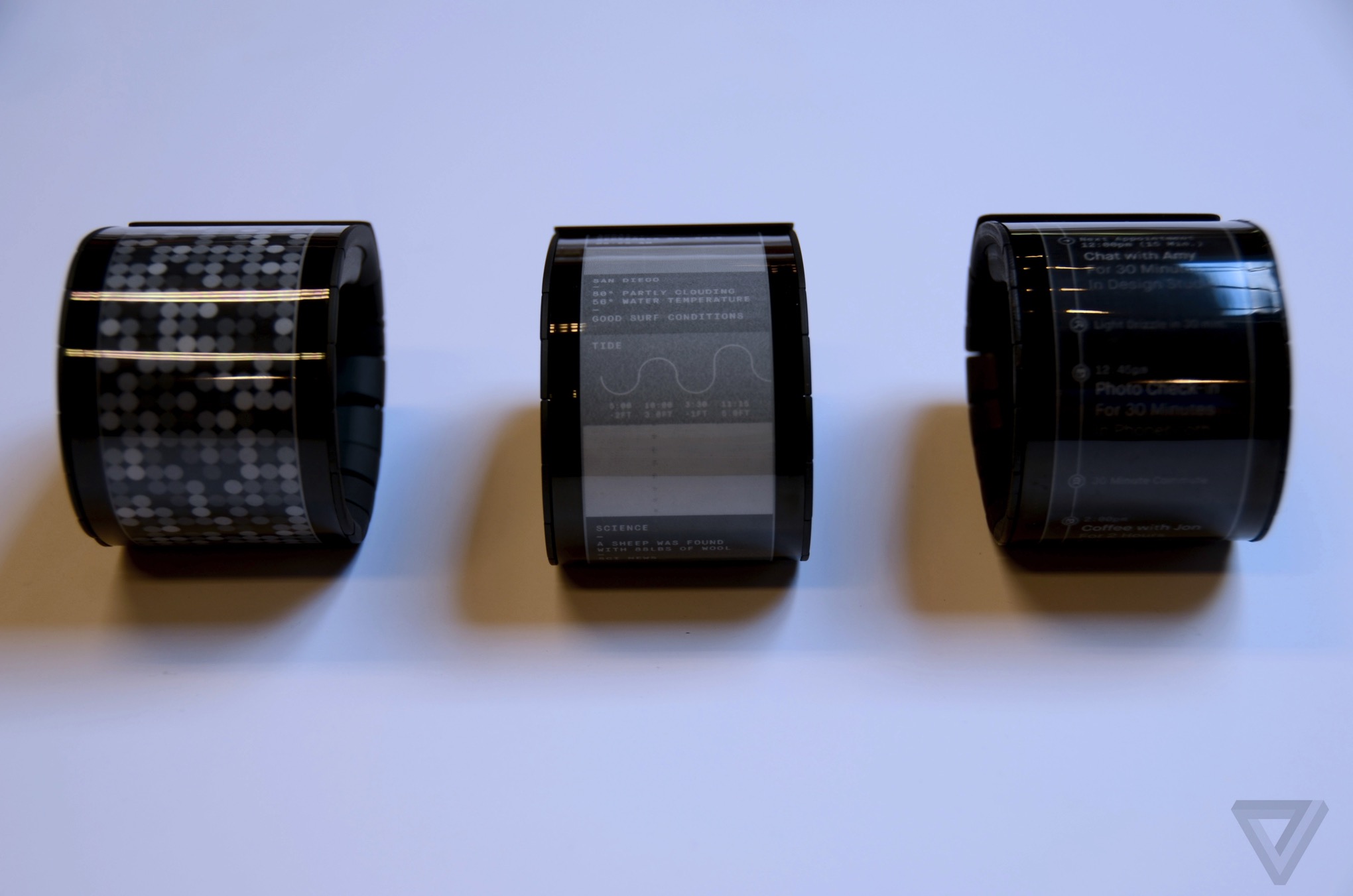 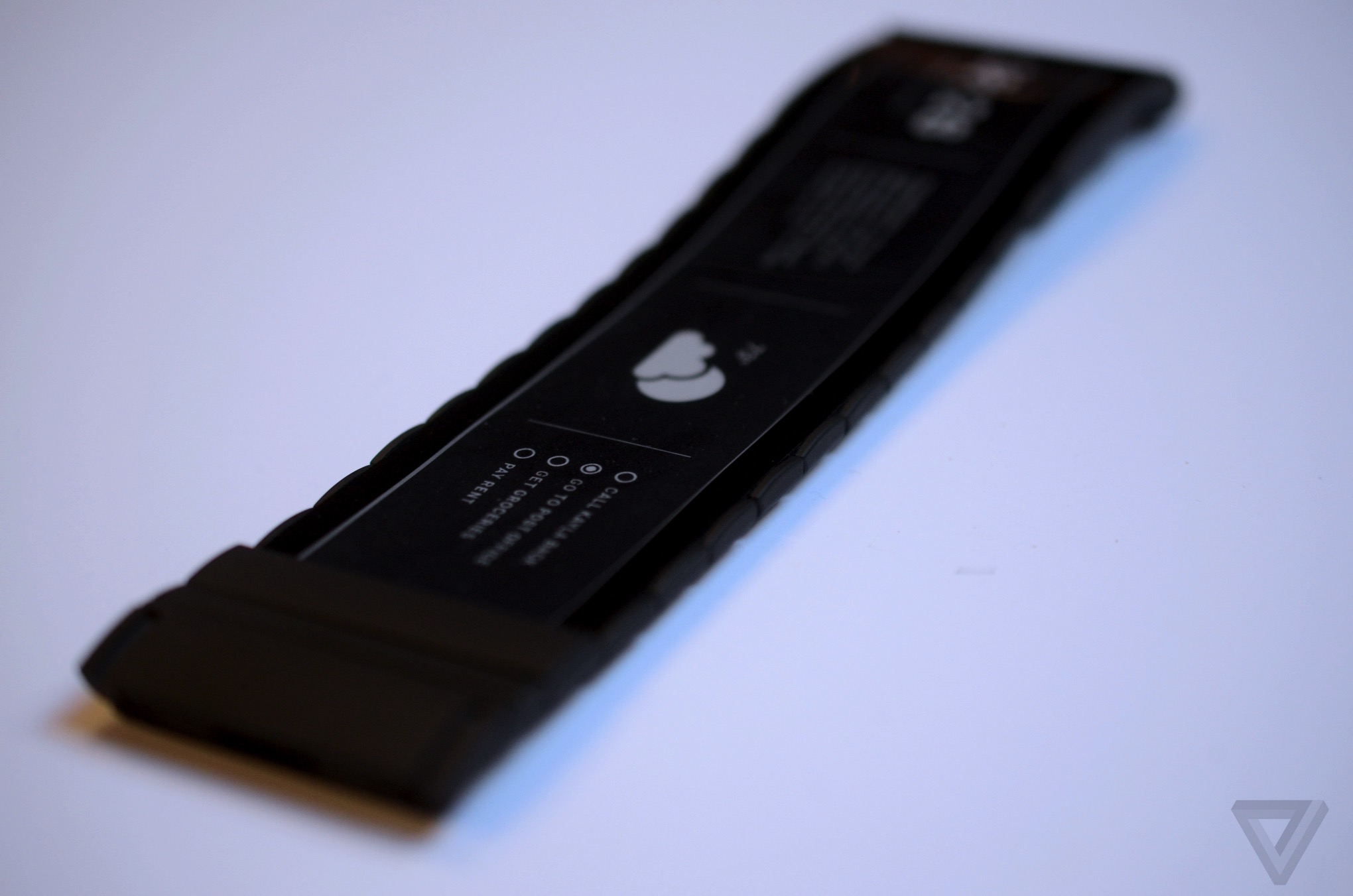 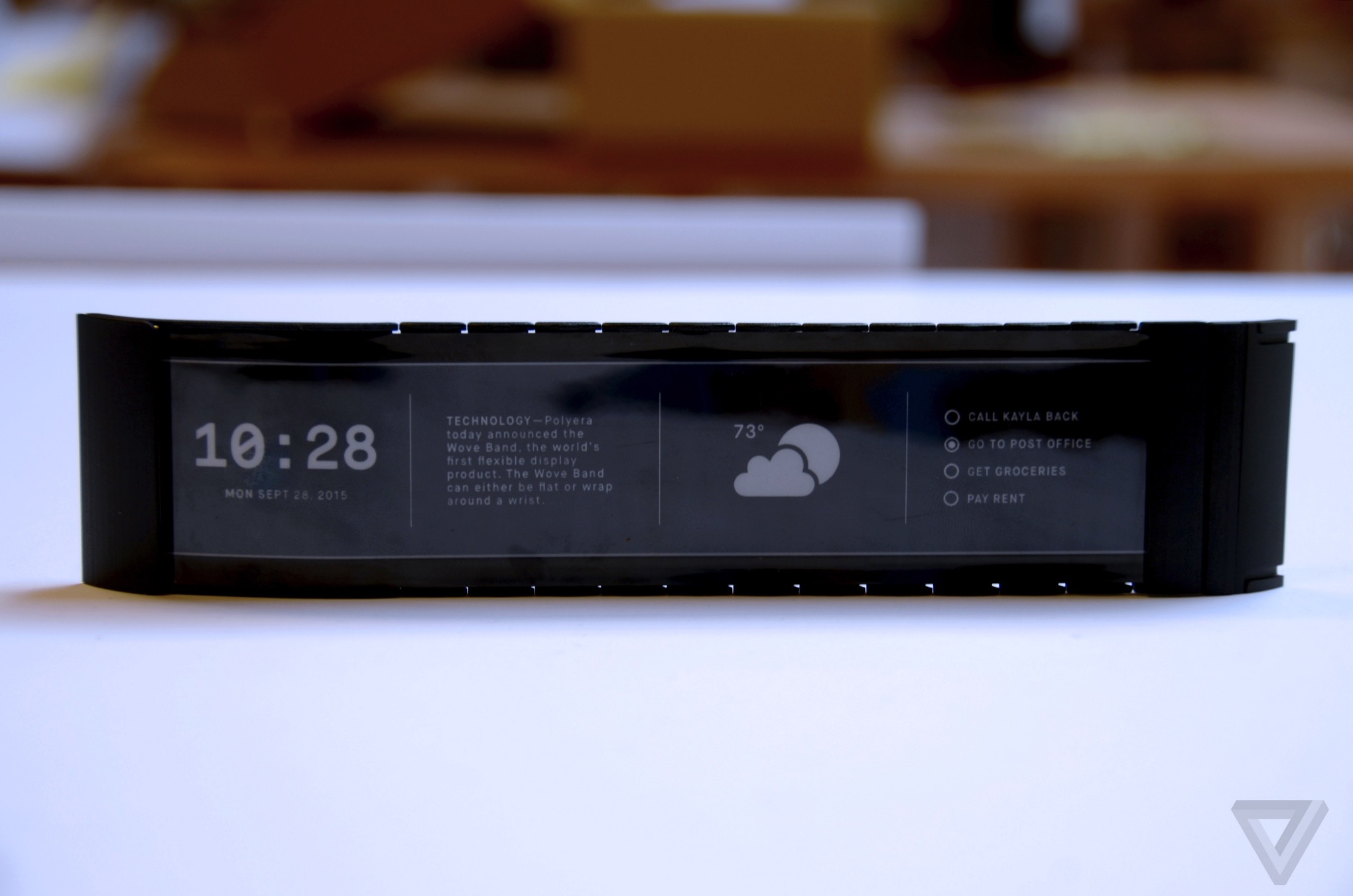 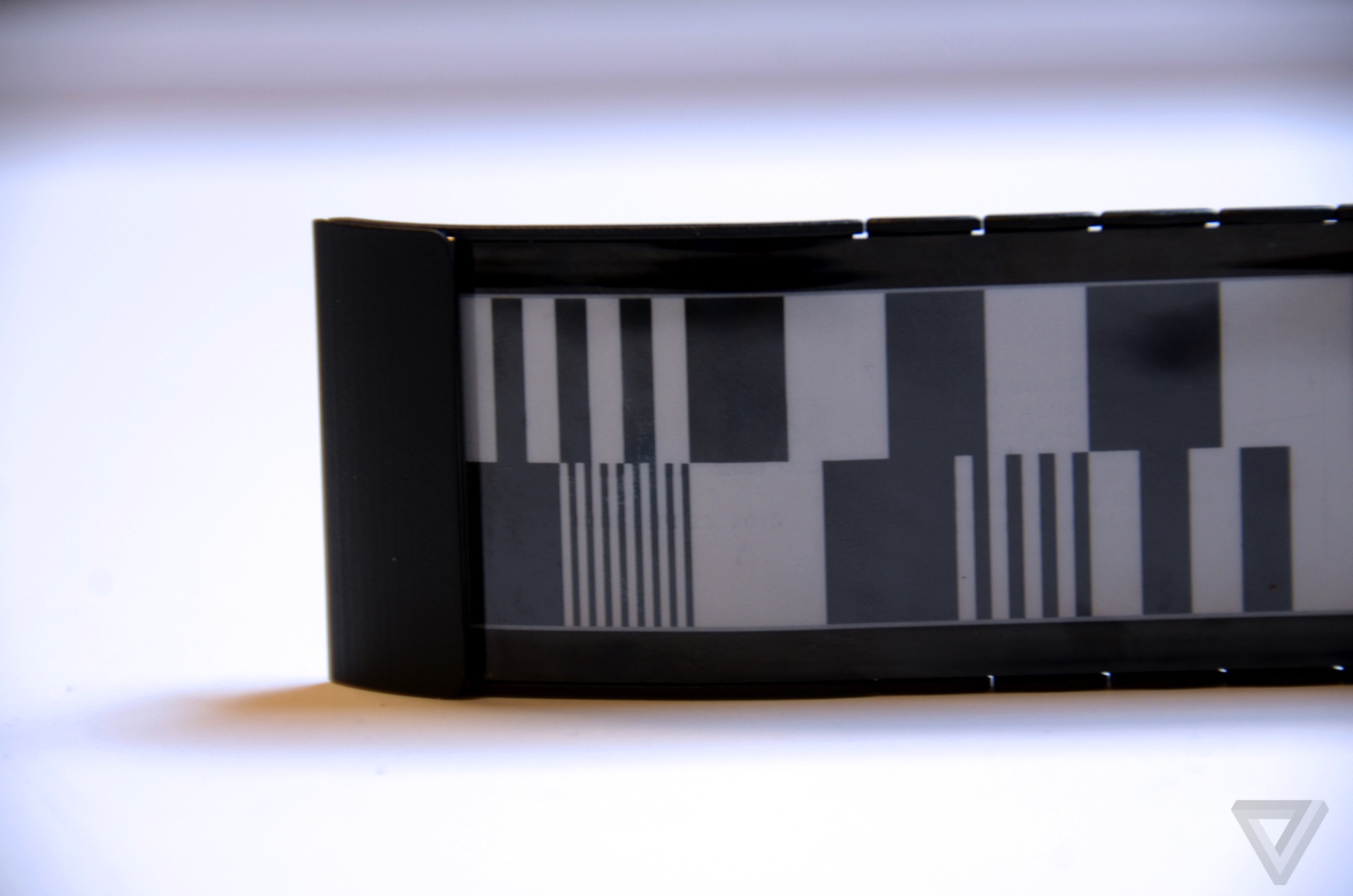 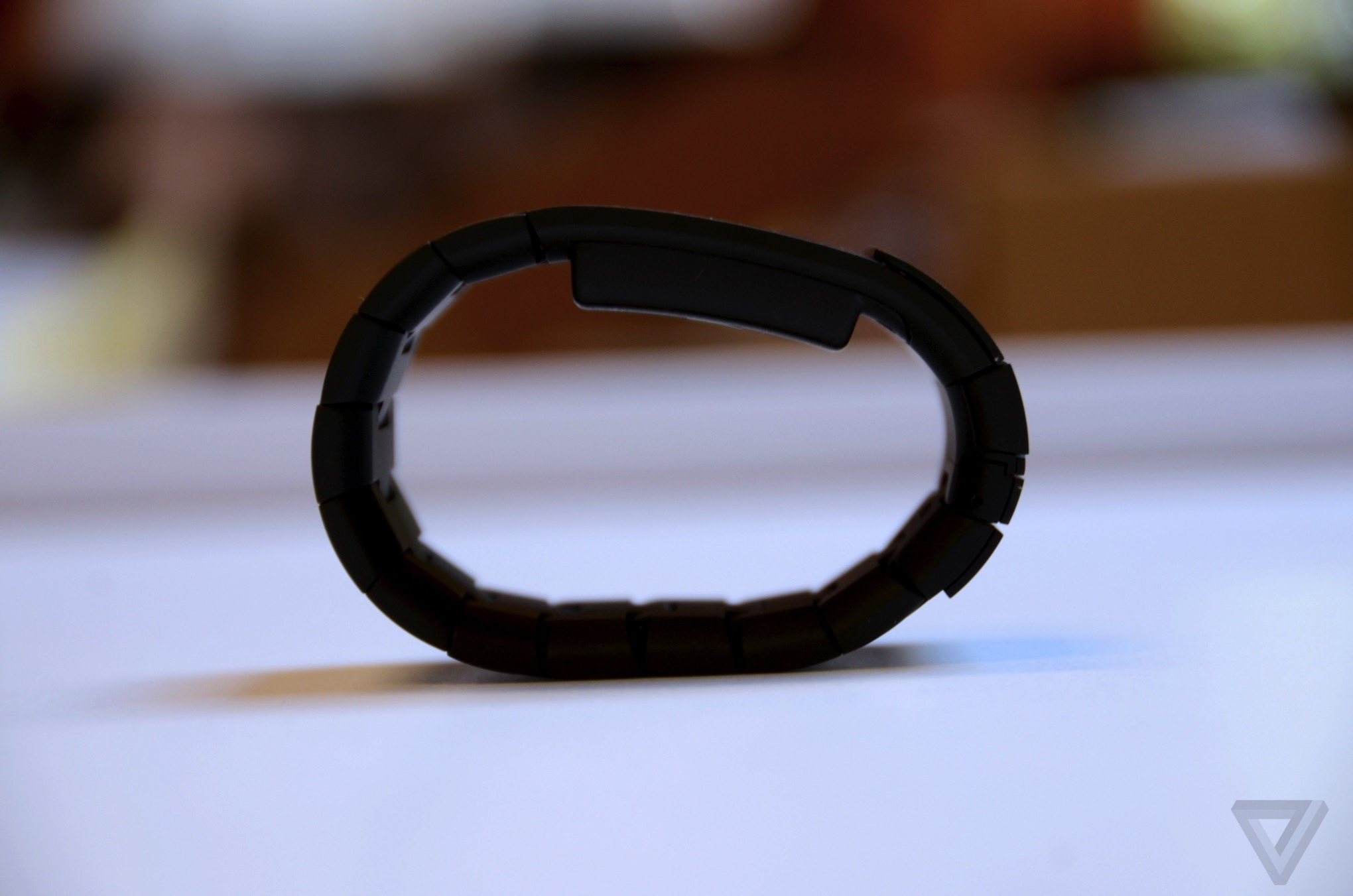 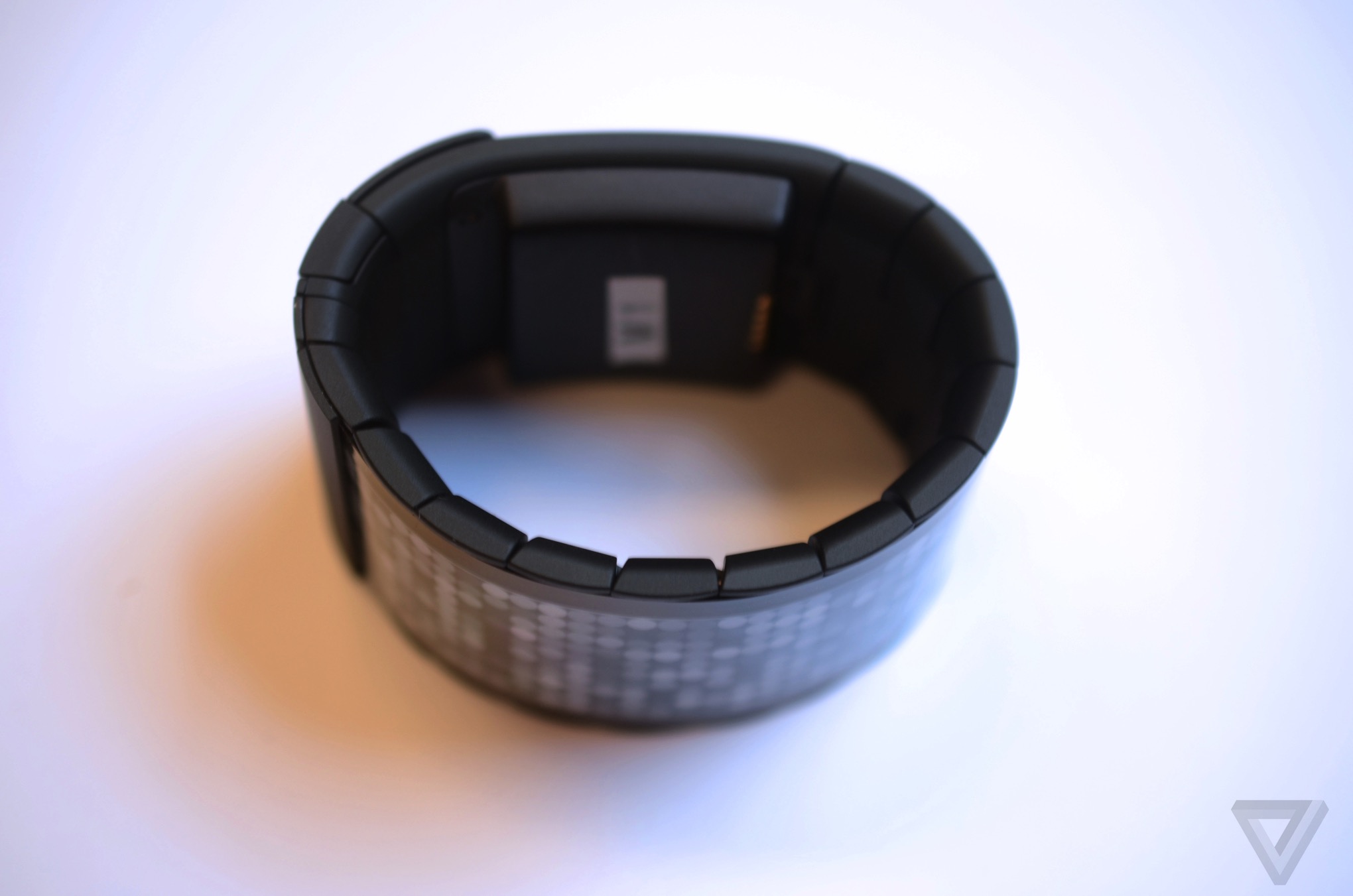