Fairphone wants you to take apart your smartphone

A phone you can fix

I’ve never dropped a smartphone on purpose before, but at the London preview of the Fairphone 2 that’s exactly what I’m asked to do. I hold the handset nervously to my ear as if making a call and then let it go, flinching as it crashes onto the pavement. When I pick it up, though, there’s only a slight scuffing on the phone’s chunky rubber case, and a Fairphone engineer assures me that even if I had cracked the screen, a replacement could be fitted in a minute. No screws, no wiring, no glue, just pop the old one out and clip a new one in.

This is because while the first Fairphone was all about creating an ethical handset that uses as few conflict materials as possible, its successor is also focusing on longevity. After all, says Fairphone founder and CEO Bas van Abel, the most ethical smartphone is the one you already own. For that reason, the Fairphone 2 not only has the same standards as its predecessor when it comes to responsible supply chains, but it’s also as repairable as a modern smartphone gets. Owners can replace the screen, the microphone, the speaker, the camera, and the main circuit board using nothing more complicated than a screwdriver, with all the replacement parts available directly from Fairphone. 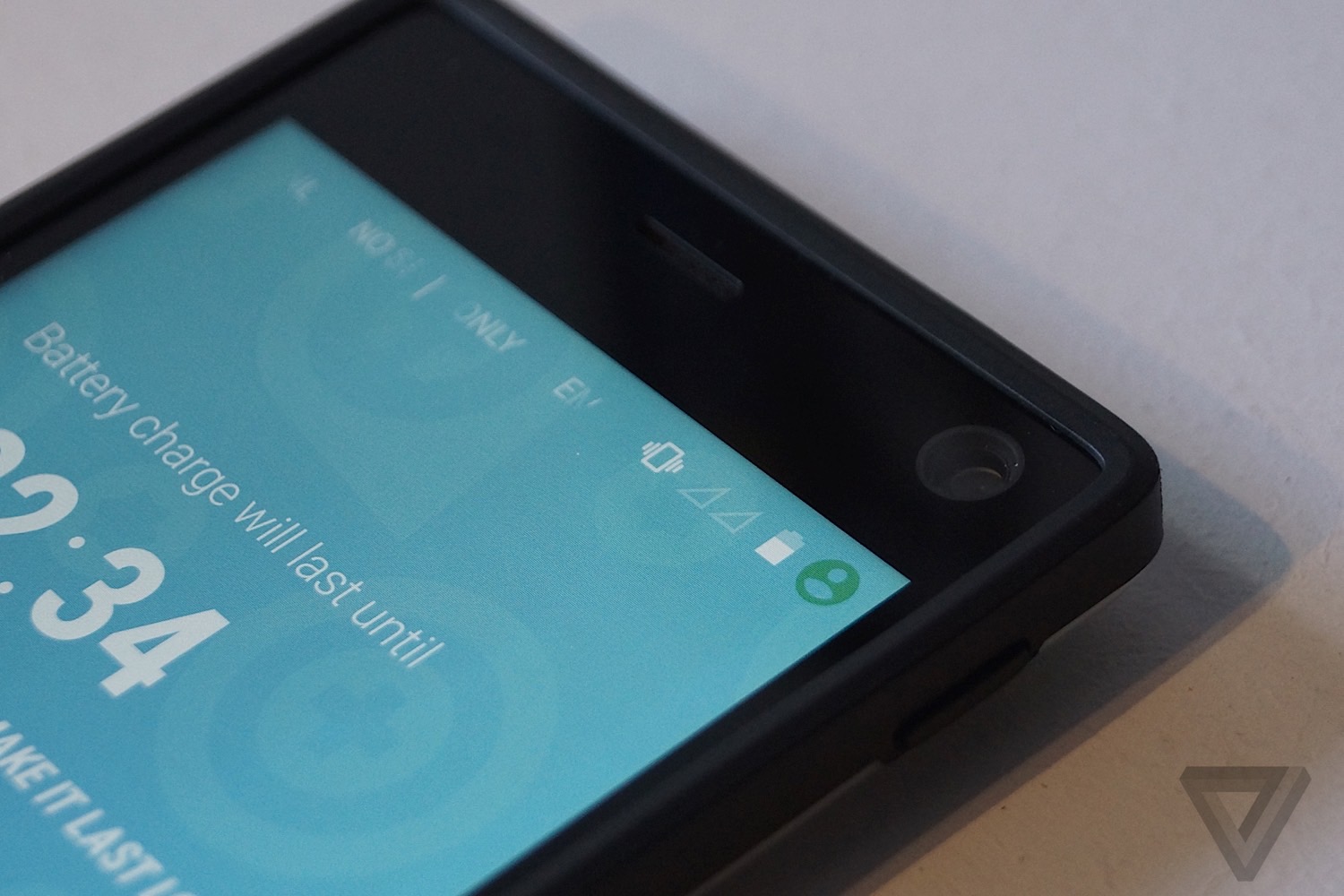 The Fairphone 2 runs a lightly-customized version of Android 5.1.
"You can’t make phones that don’t break, but you can make a phone that’s repairable," says van Abel, adding that Fairphone's aim isn’t just to extend the device’s lifespan, but also to create a "psychological lifeline" between the device and its users. "It’s a phone you have to be able to take apart in a bar and show people; ‘this is how it works, this is the story behind,’" he says. "By creating a relationship and awareness about how the phone is made [we encourage] consumers to care about their products."

Watching a Fairphone 2 being swiftly deconstructed and clipped back together in front of me was certainly engaging, but I do wonder whether it will entice anyone who doesn’t already take an interest in the technology they use. Perhaps the more attractive aspect of the device’s repairable nature is the ability to upgrade it as well. Fairphone says that it wants the phone to stay in use for up to five years, and so intends to offer not only replacement parts, but, as time goes by, upgrades as well. This could include modules inside the phone like a better camera and reversible USB Type-C port, while the back panel, too, has space for extras, with the potential to incorporate specialist features like an iris scanner or even a built-in solar panel for topping up the battery outdoors.

You can take apart the basic components of the Fairphone 2 in seconds, while other modules (like the camera and microphone) are secured with just a few screws.

All this is hypothetical for the moment though, and the Fairphone 2's current technical specs are simply those of a larger-than-average, mid-range smartphone. The 5-inch display has a 1080p resolution and is powered by 2GB of RAM and a 2.4 GHz Snapdragon 801 processor. There’s 32GB of internal storage (expandable via microSD), dual SIM slots, support for LTE-Advanced, and the battery has a capacity of 2,420 mAh. The phone runs a slightly modified version of Android 5.1 Lollipop designed by Kwamecorp that puts the app drawer one swipe away from the home screen. Performance-wise, the Fairphone 2 feels perfectly capable during a brief hands-on, but we didn’t have the chance for any extensive performance testing. (It should be noted that the company also originally promised that the Fairphone would run open-source operating systems such as Jolla’s Sailfish OS and Canonical’s Ubuntu Touch. This is apparently still in the works.)

The Fairphone 2 certainly looks chunky sat next to an iPhone 6, but it doesn't feel too bad when you're holding it.

Most surprisingly, though, despite being 11 millimeters thick, the Fairphone 2 doesn’t feel unbearably large to hold. It certainly looks quite brick-like placed next to any flagship handset (the Samsung Galaxy S6, by comparison, is just 6.8mm thick, while the iPhone 6S measures 7.1mm front to back), but it’s amazing what your hand will be comfortable with when it’s not expecting another delicate wafer of machined aluminum. The device is about as thick as a flagship handset was four years ago, and although it's bulky in your pocket, it doesn't make the phone a write-off by any means. The company points out that the Fairphone 2's bulk is necessary not only for the built-in case, but also to make it repairable as well. 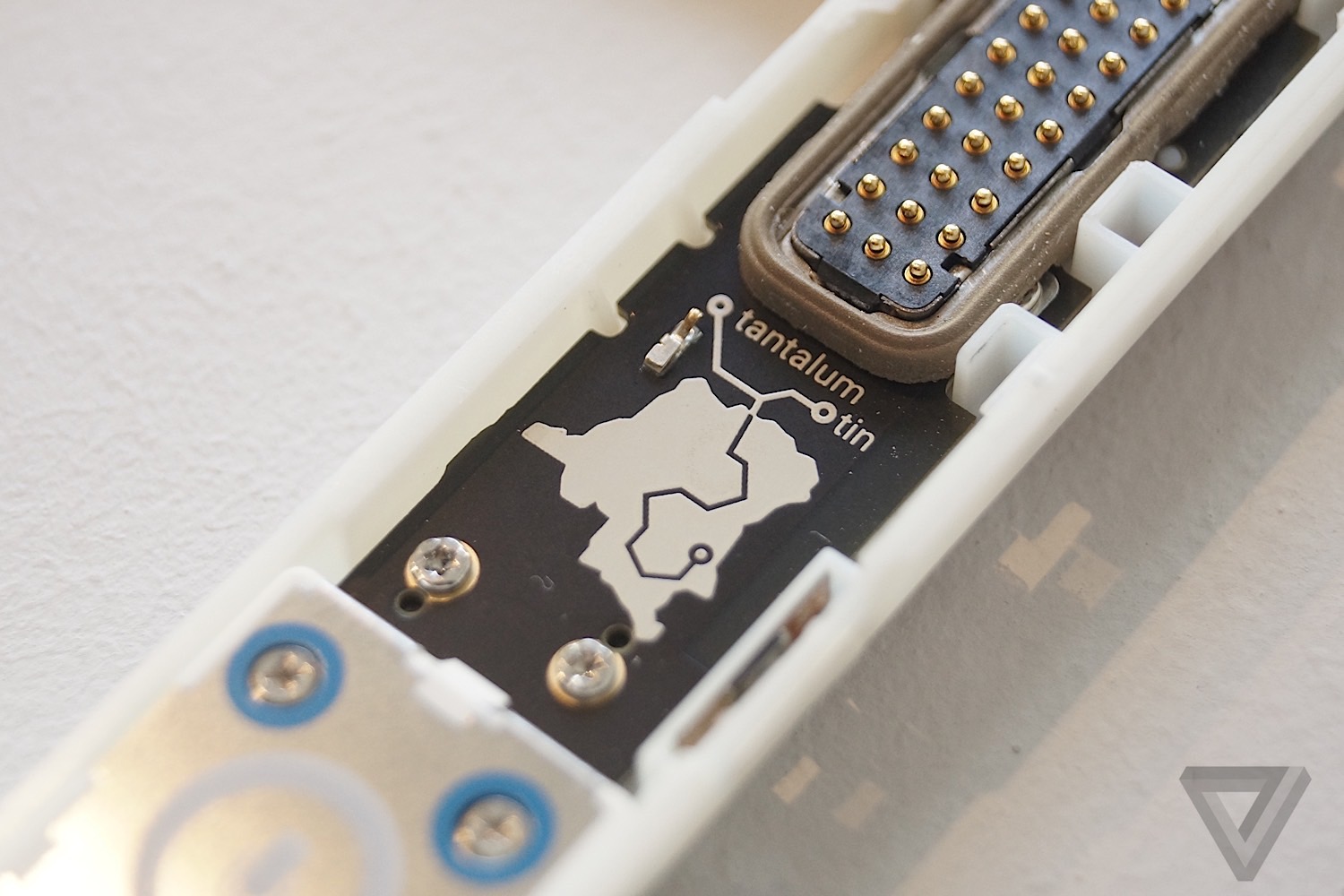 The interior of the Fairphone 2 includes a rough map of the Democratic Republic of the Congo, where the tantalum and tin in the device are mined.

More to the point, though, is what you might call the phone’s inner beauty. Like the original Fairphone, the Fairphone 2 is built with a watchful eye on the supply chain. The tin and tantalum are sourced from conflict-free mines in the Democratic Republic of Congo, and the company is currently trying to find equally ethical sources of gold and tungsten. (Full production of the Fairphone 2 has not yet begun, but the company says it’s on track to incorporate the tungsten, but not the gold, before the second round of shipments.) Fairphone also donates a portion of the money earned for each phone toward social schemes such as welfare funds for workers and e-waste projects. A precise breakdown of these costs can be seen on the company’s site, which is also interesting if you’re just curious about how much of your smartphone’s price tag paid for things like patents.

The Fairphone 2 is pricier than its predecessor though, up from €325 to €525 ($587) in Europe. Preorders have already begun for the handset and have just ticked over the 15,000 mark the company needed to start full production. The phone is also launching in the UK for the first time this year (for £395), although there are currently no plans to make the handset available in the US. Van Abel said that the company "definitely" wants to go stateside at some point in 2016, but that the focus is currently on making the Fairphone 2 a success in the EU. This new handset certainly gives the company a solid base to build on, but it still needs more users — and more people taking apart their phone in the pub — to become a real movement.