Last year, Apple delivered a dud of an iPad. I’m not talking about the iPad Air 2, which set an incredible new benchmark for the type of speed and performance consumers can expect from tablets. No, I’m referring to the disappointing, mailed-in iPad mini 3. In 2014, Apple decided to update the the iPad mini 2’s spec sheet with just one thing: Touch ID. The result was a tablet that felt underwhelming the moment it arrived on store shelves — despite costing the same $399 as the earlier model.

A year later, we’re now looking at the iPad mini 4. Considering the barely-there mention it got at Apple’s September event, you might think we’d be in for another underwhelming refresh. But you’d be wrong. For 2015, we’ve gotten the opposite of a lazy revision; Apple has delivered improvements at almost every turn. The iPad mini we wanted last year? It’s here today.

Apple spent less than 20 seconds introducing the iPad mini 4, but in that time Phil Schiller, Apple’s SVP of marketing, made an encouraging claim: “We’ve taken the power and performance of iPad Air 2 and built it into an even smaller mini enclosure.” This is only partly true. If you’re looking at thinness, the new iPad mini slimmed down from its predecessor, and is slightly lighter, too. But it’s also gotten a bit taller — to such an extent that many cases for the iPad mini 3 just won’t fit. Apple sells a front smart cover and silicone case for the new mini’s backside, but annoyingly the more comprehensive Smart Case no longer exists. Now if you want full protection, you’ll have to buy both the cover and rear case for over $100 after tax. Ouch. 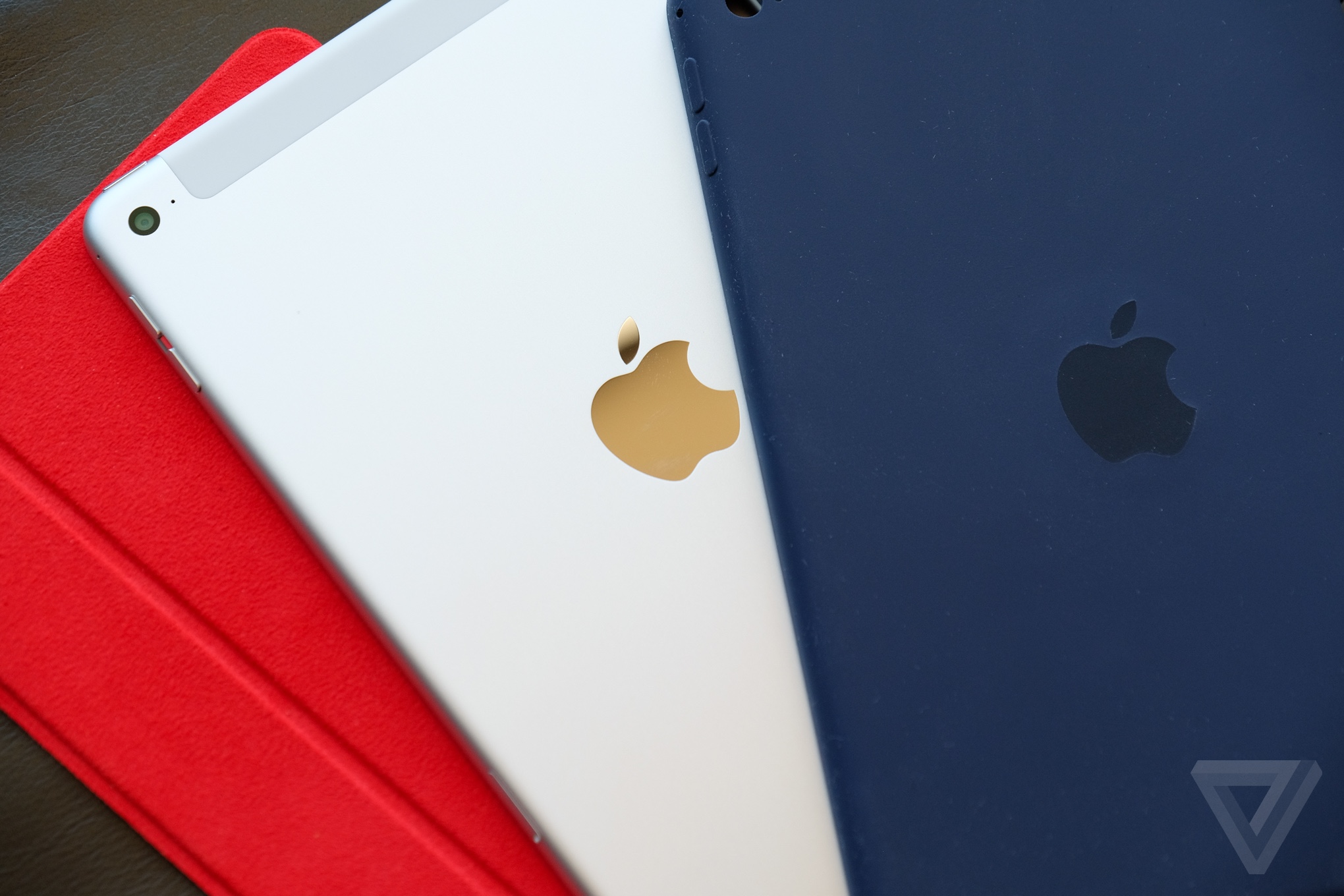 Aside from tweaks to the mini 4’s dimensions, it looks nearly identical to the 3. The only obvious hardware change is Apple’s removal of the orientation lock / mute switch; you’ll need to swipe up Control Center for those two options now. Color choices remain the same with space gray, silver, and gold versions available. Tragically, there’s no perfect match for your shiny new rose gold iPhone 6S. Storage has also gone unchanged, which means almost everyone should skip the entry-level $399 16GB model for 64GB or higher. 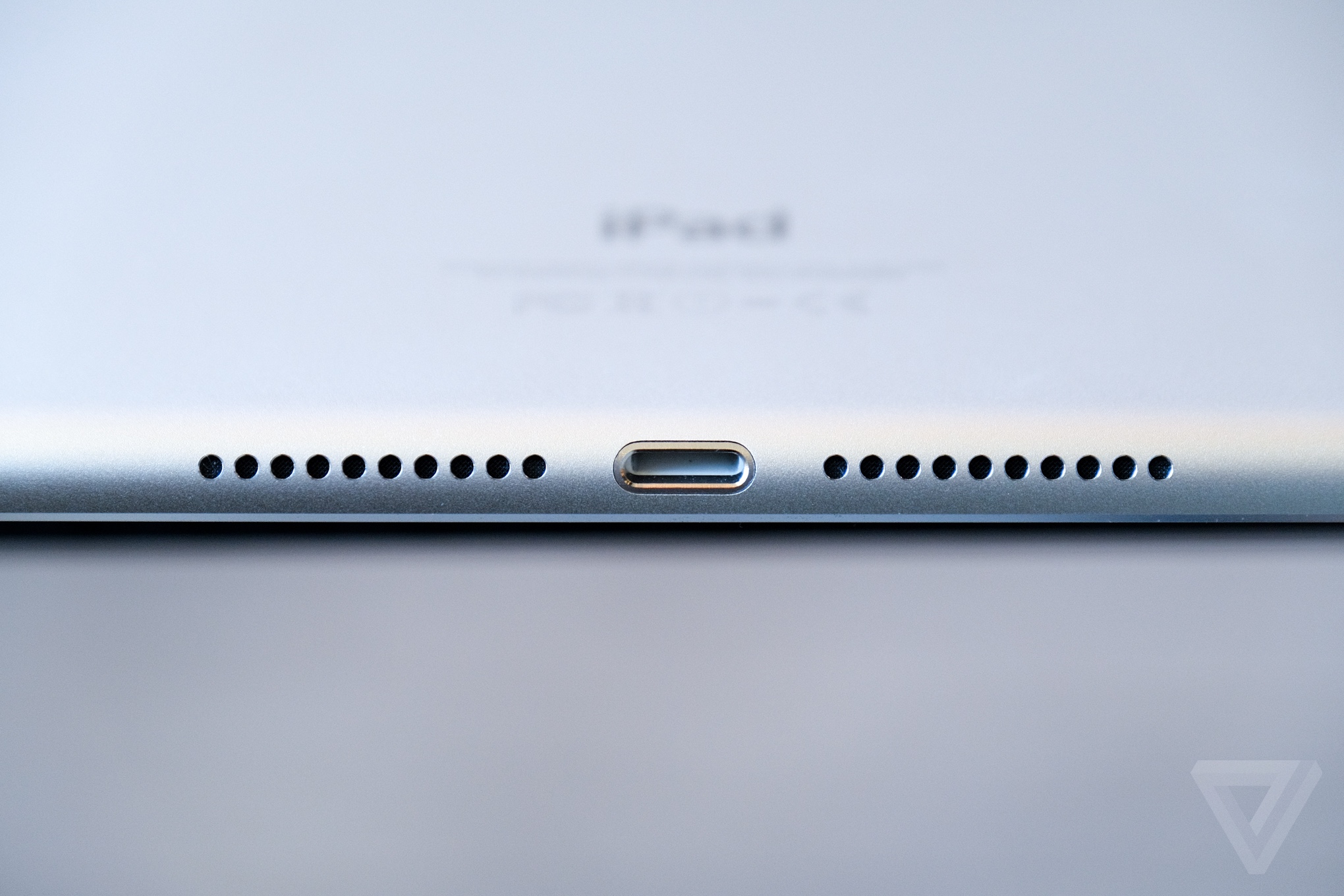 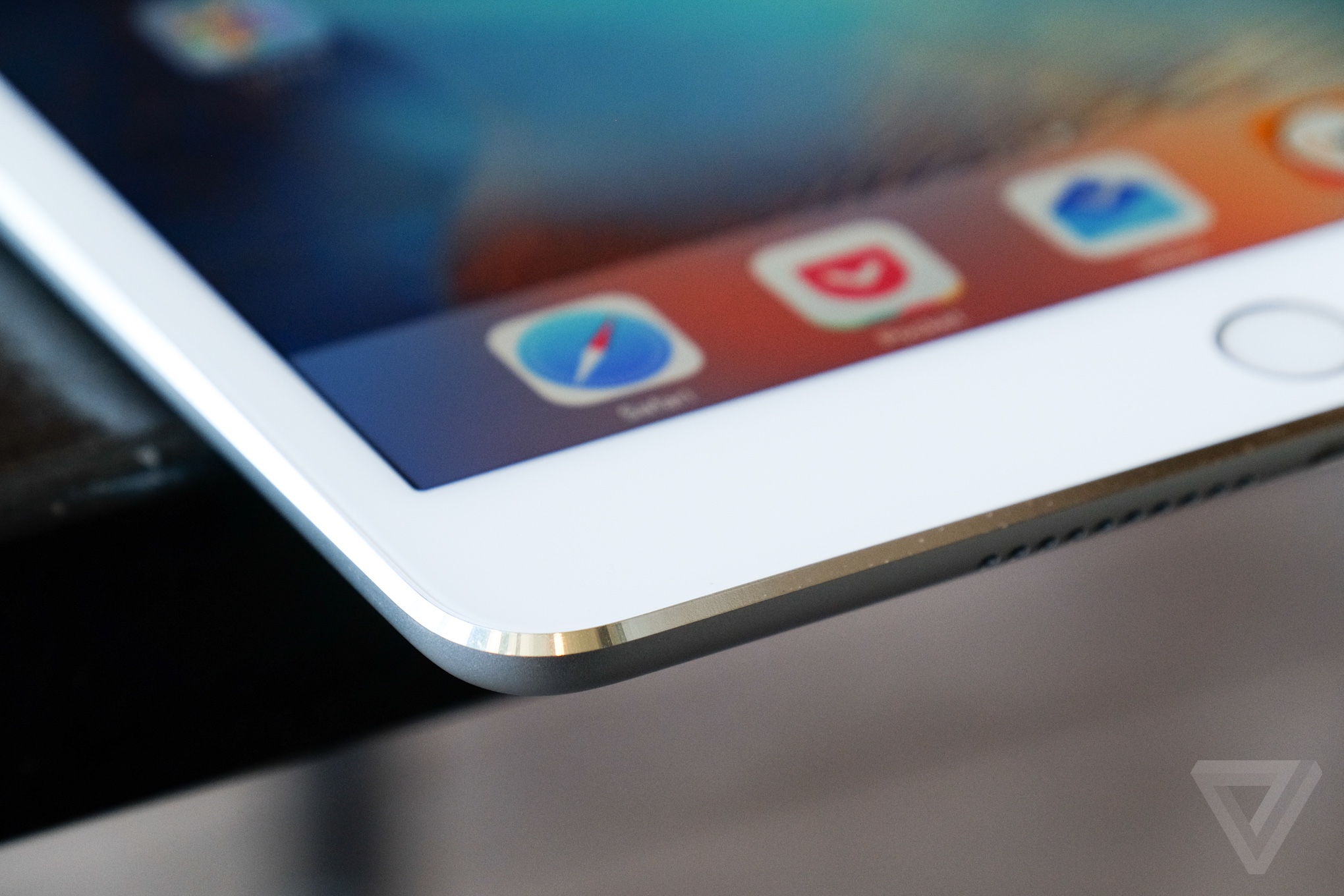 There’s nothing wrong with the iPad mini’s continued design; its metal-and-glass construction still screams "premium." But going with the same look means Apple hasn’t yet addressed some legitimate critiques. For one, the company keeps using chamfered edges on its iPads, even after the iPhone graduated from this design trait last year. They look nice, but the shiny trim around the screen is always the first thing to get scratched up — even with immaculate handling. Also, the iPad mini 4’s speakers, which are positioned together beneath the same grill on the bottom right, still leave a lot to be desired. No one’s saying this thing needs four speakers like the iPad Pro, but it’s really in need of better stereo separation.

Fortunately, you’ll mostly forget about these drawbacks the moment you turn the screen on. Apple’s smaller iPads have always ranked behind their bigger counterparts in color reproduction — until now. The iPad mini 4 has a gorgeous, vibrant display that’s on par with the iPad Air 2 and a massive step up from what came before. Better still, it’s now fully laminated. Apple has eliminated the air gap between the Retina LCD and the iPad mini’s cover glass, so it feels more than ever like you’re touching iOS and your apps with nothing in the way. Everything feels like it's floating on glass — the same effect that's now commonplace on phones. A new anti-reflective coating also makes the iPad mini more practical for outdoor use. These improvements add up to a screen that’s perfect for gaming, web browsing, watching videos, and anything else you’d do on a tablet. It’s just great to look at. 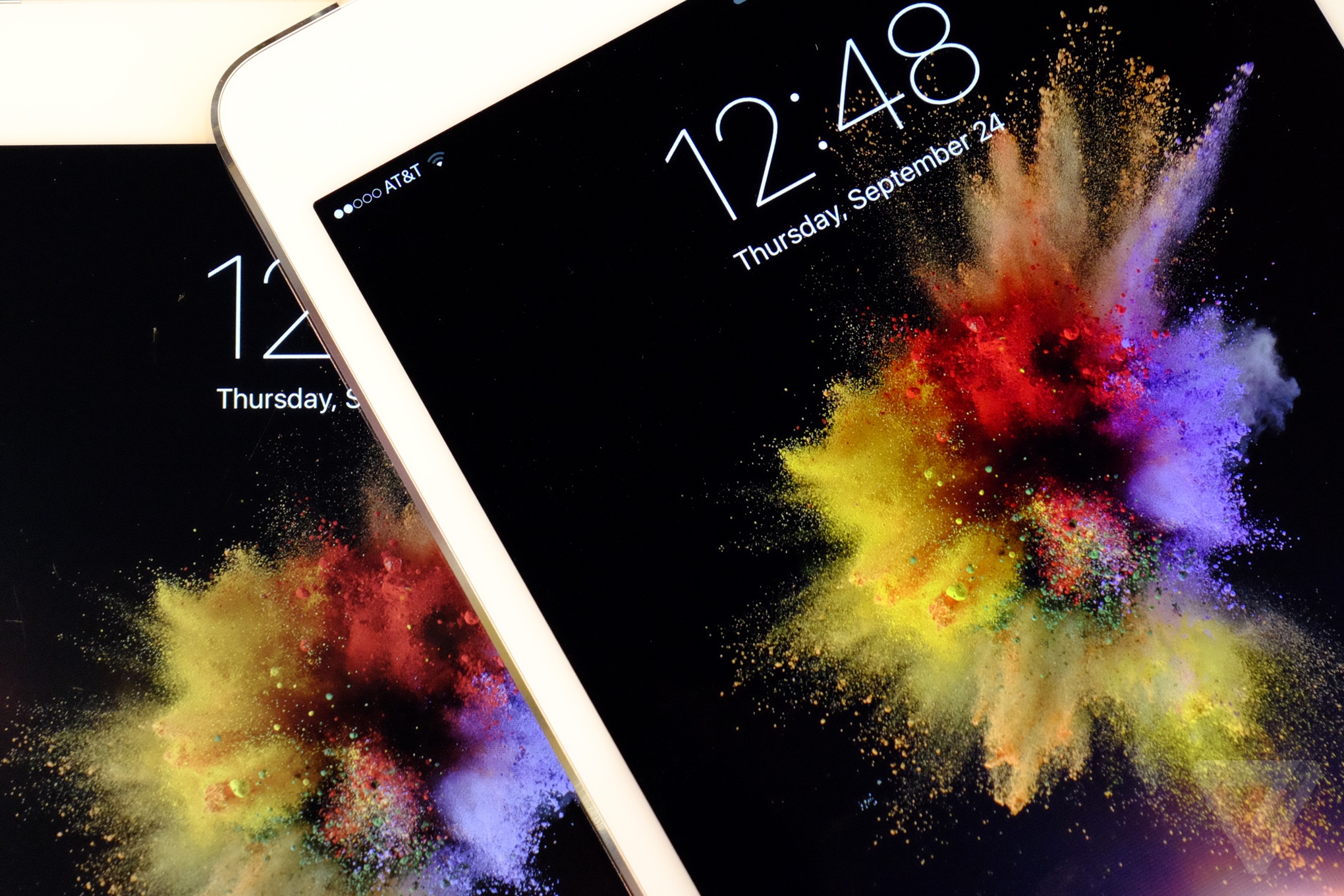 Performance also falls under "great," but not class-leading when compared to the full-size iPad Air 2. (It’ll still outpace many Android tablets you can buy, though.) The iPad mini 4 is pushed along by Apple’s 64-bit A8 processor, which is definitely an upgrade from last year but not quite as powerful as the Air 2 despite what Schiller boasted on stage. Apple says the new chip delivers speed gains of up to 30 percent, and sure, apps definitely open faster. The mini 4 has 2GB of RAM inside, so apps are also less likely to unexpectedly restart when you’re multitasking, and Safari won’t need to reload your tabs so often. Graphics performance has jumped by 60 percent, and it’s impossible to find any current iOS game that slows down this iPad in any noticeable way. There’s zero lag more often than not, and the (very) slight stutters I’ve seen in the app switcher and Split View can likely be blamed on the brand new iOS 9 rather than the iPad’s hardware. Hopefully they’ll be gone in a software update or two. 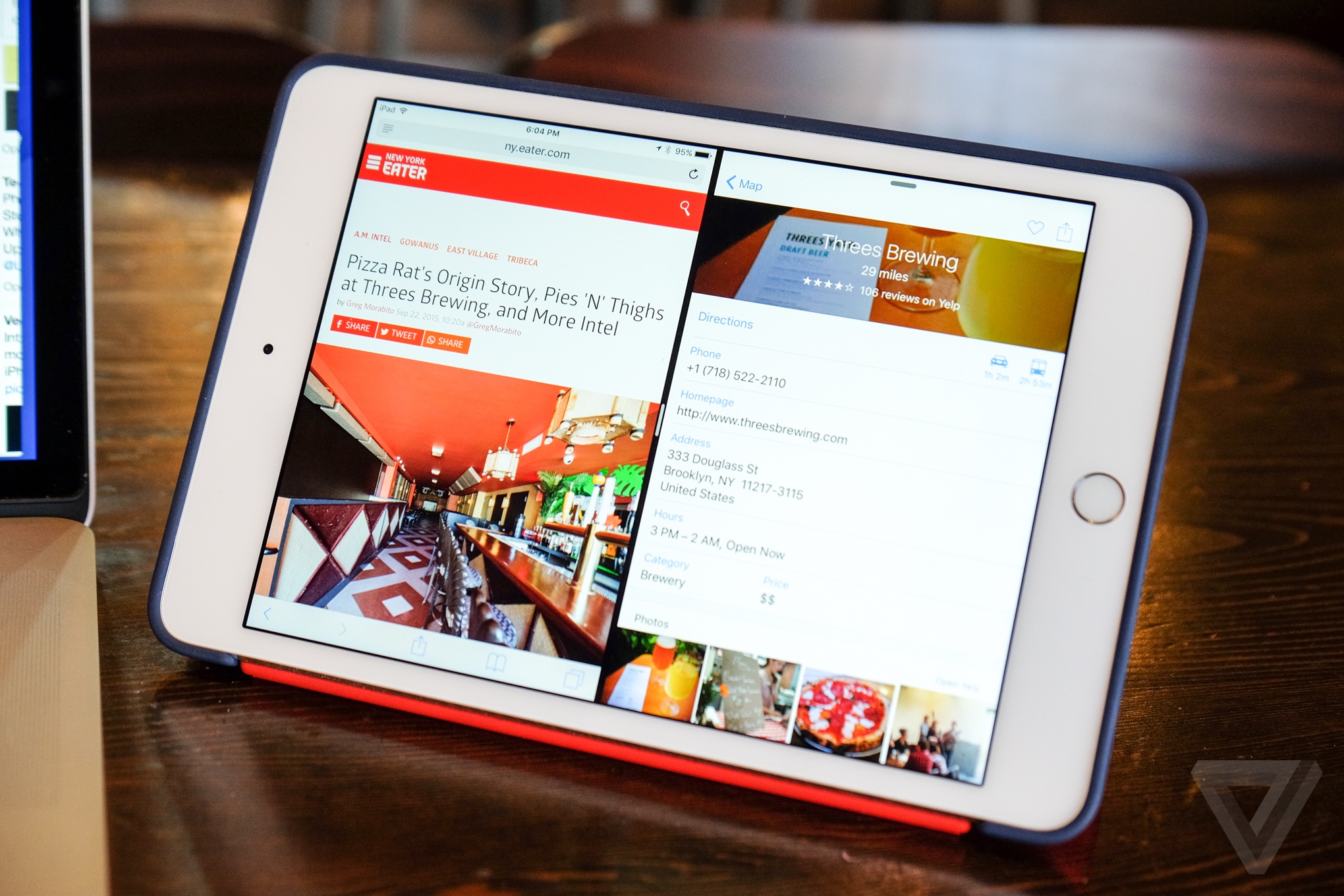 I’m not sure who worries about iPad battery life anymore, but the mini 4 holds true to the 10-hour figure that Apple promises. Wi-Fi speeds have also been boosted, and as usual you can buy an LTE-capable version for $130 on top of each model’s regular cost. The Apple SIM is back and offers nice carrier flexibility, but Verizon customers will still need a separate SIM card to get on the network.

As for iOS 9, the iPad mini 4 is fully capable of split-screen multitasking just like the iPad Air 2. But the feature is a bit less appealing on a 7.9-inch screen. In Split View, Safari basically just shows you a smartphone view of websites, and text can sometimes be an eye strain even with the iPad held at normal distances. I don’t foresee many people doubling up on text-heavy apps like Microsoft Office and Twitter. Maybe running things side by side will prove more useful for visual apps like Hulu, Maps, and Photos. It’s a feature that’s there if you need it, but better suited for Apple’s larger tablets.

That aside, other iOS 9 changes like picture-in-picture, the revamped Notes app, and all-new Apple News are welcome improvements. And despite hating it on iPhone, I’m more tolerant of the new app switcher on iPad for whatever reason.

Oh, and the camera’s better too, for all of you people who shoot pictures with a tablet. Apple bumped the mini 4’s camera up to 8 megapixels, and photo quality is basically on par with the iPad Air 2. That means it’s perfectly adequate — dare I say even good — in ideal light, but for everything else, you should really only open the iPad’s camera app when your phone is out of reach. The 1.2-megapixel FaceTime HD camera up front has also been upgraded to perform a bit better in low light, but it doesn’t compare to the new 5-megapixel front camera on the iPhone 6S. 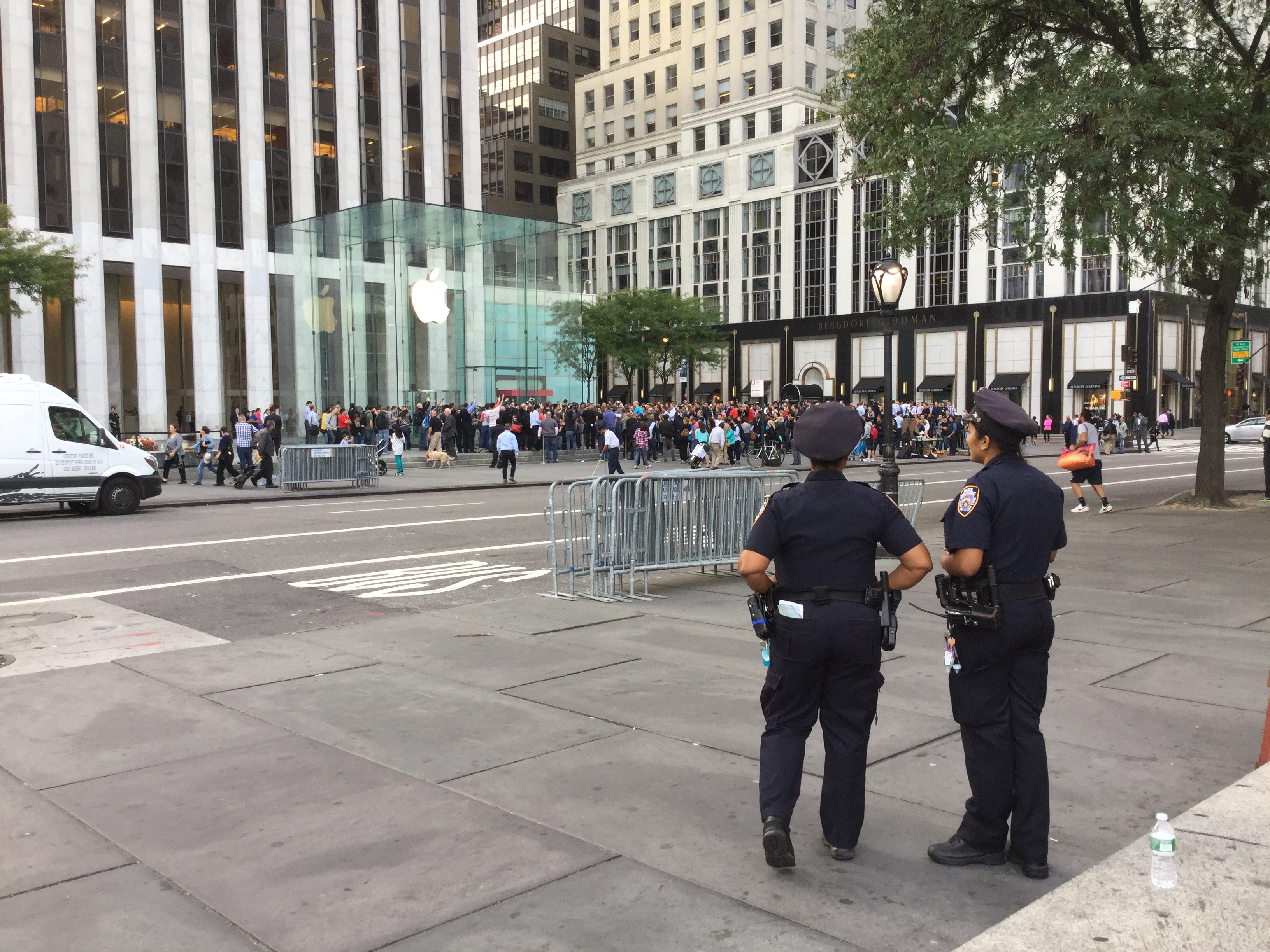 The iPad mini 4 might recycle the same outward design as it predecessor, but otherwise it’s better in nearly every way. It has the best-looking screen Apple’s ever put on a small iPad, which alone is worth the step up from iPad mini 2 or 3. You’ll get faster performance, better Wi-Fi, and an improved camera, too. And the fact remains that Apple still offers a much stronger ecosystem of tablet apps than what you’d get from Android.

Whether the mini iPad (or small tablets in general) will survive alongside phablets like the iPhone 6S Plus and Galaxy Note 5 is an open question. And sure, many Android tablets can accomplish the same core tasks for less money. But none of them can match the overall experience you get with the iPad mini 4. Apple’s $499 64GB model is the right choice for most people, and if you really need connectivity in a pinch, either tether to your smartphone or spend extra for the convenience of built-in LTE. It’s easy to see where the iPad mini can improve next year by adding new features like 3D Touch and perhaps Apple Pencil support. But even without them, this is the best small tablet Apple has ever made. After last year’s disappointment, the iPad mini is redeemed. 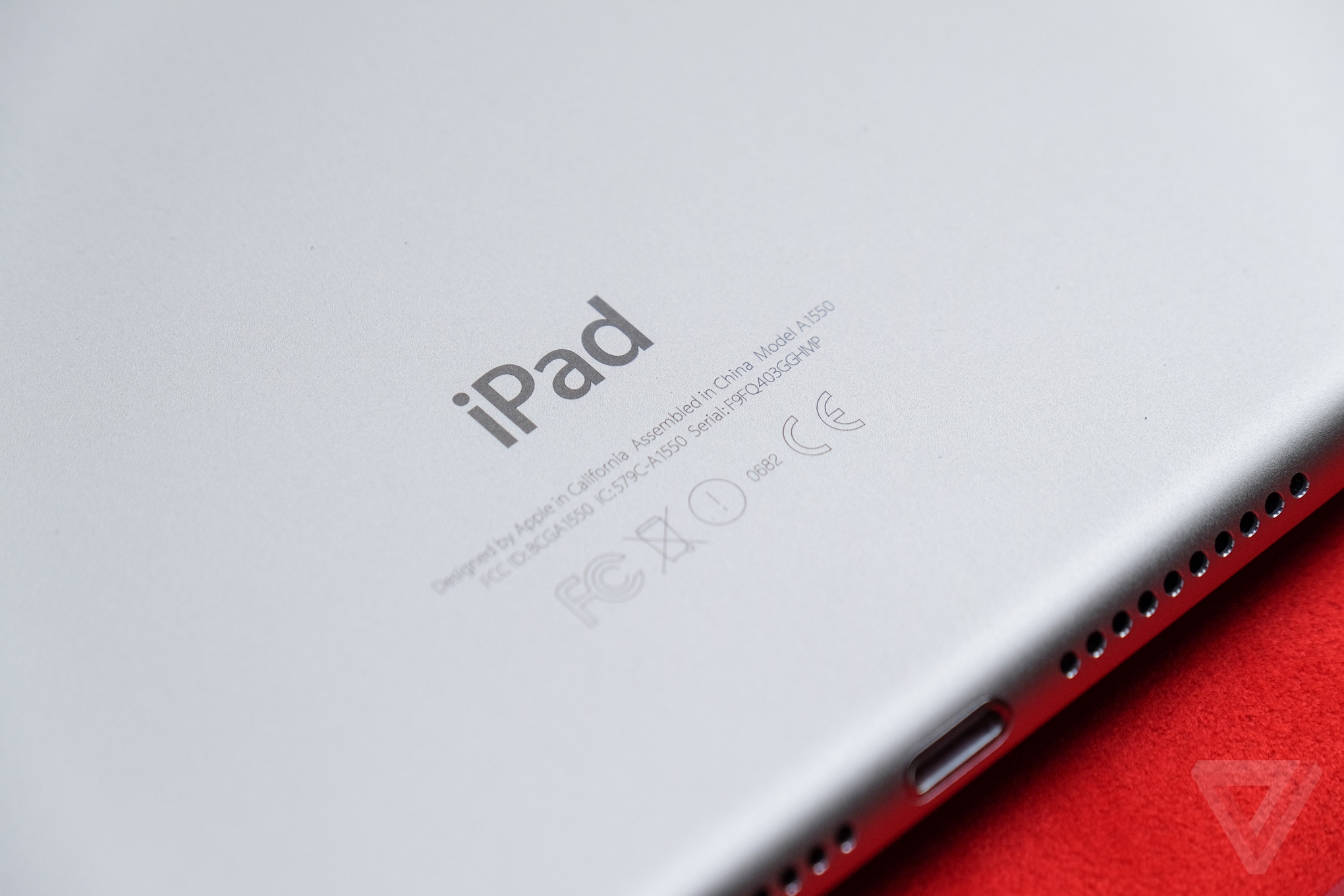 $399.99 at Best Buy$309.00 at Amazon
Most Popular
From our sponsor
Advertiser Content From