Shopping for drones and missiles with the world’s armies

I spent a day at London's DSEI, one of the world's biggest arms fairs

Share All sharing options for: Shopping for drones and missiles with the world’s armies

Everytime I watched someone pick up an assault rifle or a pistol at the Defence and Security Equipment International (DSEI), London’s biennial arms fair, I waited to see if they would pull the trigger. It goes without saying that the hundreds of guns at the event are all safe and deactivated, but there’s still a small part of you that wonders, “What if they forgot about that one? What if there’s a round in there?” It reminds you that in a different scenario, all these objects are not just products to be bought and sold, but weapons that maim and kill. That’s their purpose, but at a big business event like DSEI — where the tools of war are made ordinary by booths and lanyards and men in suits — you wonder if people forget. If you watch long enough, though, everyone pulls the trigger.

By some accounts, DSEI is the largest arms fair in the world. It’s an event that’s been held in London since 2001, and it attracts government officials, soldiers, and businessmen from countries all over the world looking to buy and sell the tools of war. It’s not just for things that kill (though there are plenty of those), but also things that save people from dying (body armor, medical packs) and things that are just needed for the whole business to work: a utility drawer of antennas, engines, uniforms, sensors, cameras, and batteries. Once guns are on the scene, you need a whole other arsenal of gear to support them. 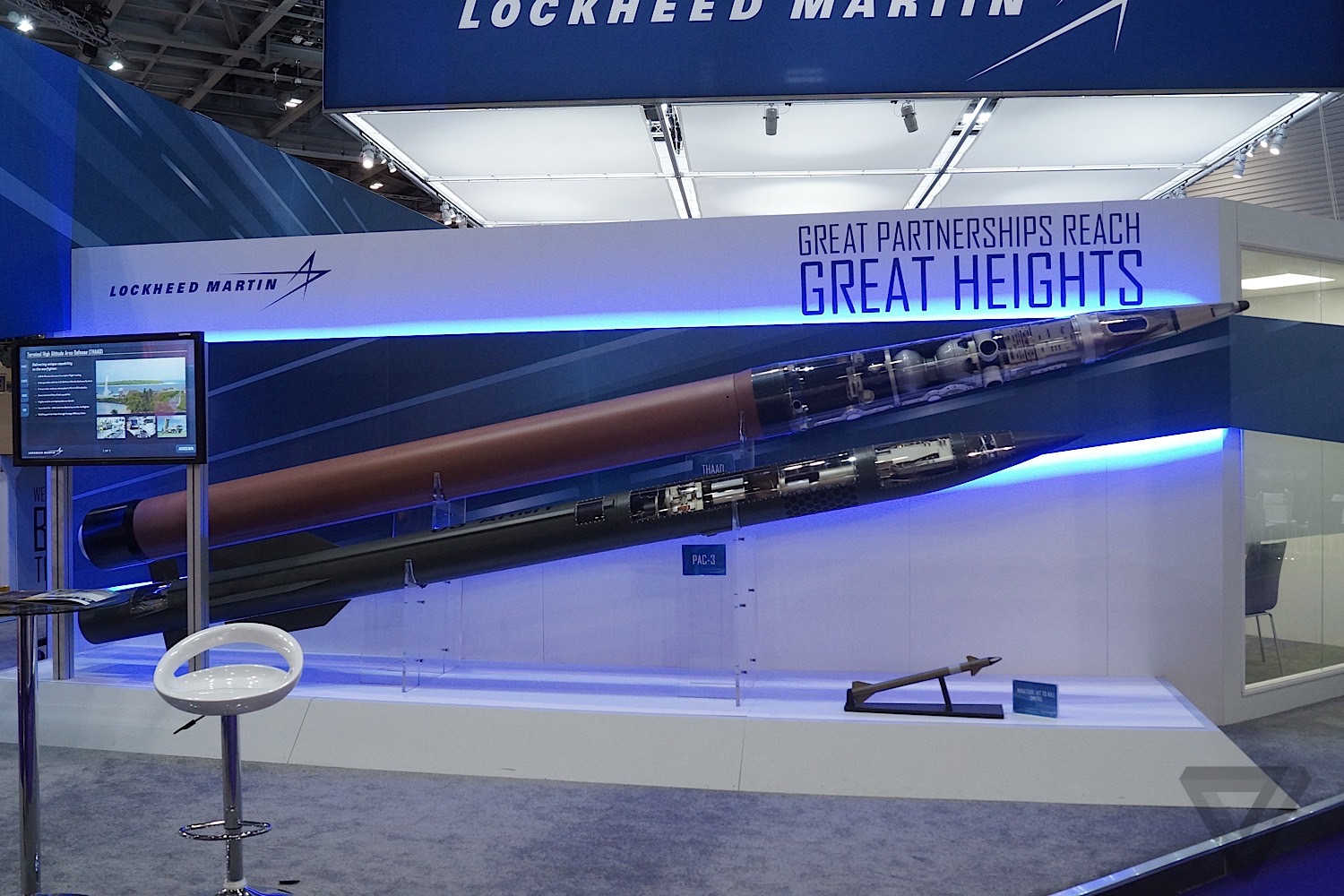 As with tech conferences, this equipment is advertised with aspirational language, although, at DSEI, there’s an overriding sense of morbid literalism to the slogans. "Innovate or Die!" says a sign on a stand selling flak jackets. "Great Partnerships Reach Great Heights," is the message printed above a pair of 12-foot anti-ballistic missiles. What sounds self-aggrandizing in consumer tech is worryingly straightforward when you’re selling things that go boom. "We dropped the hammer," says the top line of an advert for Sig Sauer pistols, referring to the part of a gun which strikes the pin that fires the cartridge, "on the competition."

It’s hard to tell whether visitors are supposed to find these catchphrases thrilling or a little tongue-in-cheek. You might think that sober military men and women take no heed of this sort of nonsense, but everyone does: that’s why it’s there. Advertising language worms its way into your head, and in this territory, these phrases have particular heft. I’m used to seeing a tablet with a mid-range, but not cutting-edge, processor described as "powerful and compact," but the phrase means something different when applied to an actual tank turret. There’s also a normalizing effect going on here, where guns and bullets are packaged in the familiar language of consumerism. Perhaps that’s normal in the US, but it’s strange in the UK where most private gun ownership is illegal.

There were also regular demonstrations of boats and battleships.

Similarly, the booths themselves reflect the global architecture of trade shows everywhere. There’s a hierarchy of small stands, medium-sized exhibits, and massive pavilions, with the largest companies bringing in actual tanks and drones, as well as wartime props like battleship consoles and blasted wall fragments to help dress the scene. There’s the usual circulation of USB sticks and leaflets between booths and attendees, and great fishbowls of sweets are left out on nearly every stand to lure in passing foot traffic. It makes me wonder whether a piece of Haribo ever cinched the deal on a shipment of assault rifles. It’s more wholesome than a suitcase of money, at least, and there are allegations of that sort of corrupt dealing surrounding DSEI and the arms trade in general.

Stands from large companies like Northrop Grumman, BAE Systems, and the Thales Group dominate the entrances to the first few halls. Their looming presence reflects the global market for arms exports, where the US holds the lead position (31 percent of the market) and European nations such as Germany, France, and the UK pad out the second-tier of sellers, with around five percent of trade apiece (the same for China). As the second biggest exporter, with 27 percent of the market, Russia is usually a big feature at these events as well, but the country’s arms manufacturers were cordially not invited to DSEI this year because of Putin’s misuse of weapons in Ukraine.

Asking people on stands "who sells what to who?" usually gets you nowhere, though. In fact, as a journalist, asking practically any question that isn’t directly related to the specifications or capabilities of a piece of kit is pretty futile. Sometimes people smile and say nothing, sometimes they cross their arms over their chests and say nothing, and sometimes your lanyard is picked off your chest and dropped back down with a dismissive "never heard of you." And then they say nothing. (This last point sounds like a minor infraction, I know, but in the world of trade shows, lanyards are there to be held up, not picked up.)

However, it’s not really necessary to ask who sells what to who. You can simply look around the halls, for example, and read one of the many massive posters stating "India has a defense spend of USD 39.8 billion and is big on procurement." Although last year India was overtaken by Saudi Arabia as the world’s biggest importer of weapons, this seems to be one of the main lessons of DSEI: some things are so big and obvious that you can literally write them on the walls, but you can’t actually talk about them.

The sale of arms to authoritarian regimes like Saudi Arabia, Egypt, Azerbaijan, and Bahrain goes on at DSEI, and many of the weapons will be used on these countries’ citizens to suppress free speech and protests. However, the massive architecture of business that surrounds the arms trade makes it all too impossible to control. There’s just too much at stake. Take BAE Systems’ al-Yamamah deal to supply Saudi Arabia with fighter jets, which was the subject of an investigation by the UK’s Serious Fraud Office (SFO). The deal spanned decades and was thought to be worth as much as £40 billion to BAE, with the SFO investigating allegations that millions in bribes had been paid to Saudi officials to secure the trade. Eventually, the UK government shut down the investigation, ruling that the the inquiry would cause "serious damage" to British security and diplomatic relations with Saudi Arabia. So it goes.

You can't avoid the fact that people get rich off war

Instances like this are a reminder, if one was needed, that making and selling weapons is a business — a good business — and this means that war is a good business, too. At a place like this, you can’t avoid the fact that money is made and people get rich.

And these kinds of observations are a necessary countermeasure to the often inoffensive appearance of the arms trade. Walking around DSEI, I was struck by its similarity to IFA, a tech trade show I visited earlier in the month. The booths, the lanyards, the men in suits discussing specs and prices; they were all the same, but instead of smartphones, everyone was looking at guns. Turning war into a business like this isn’t necessarily immoral, but it does allow us to mask the consequences of so much state-sanctioned violence. If the arms trade is just another business — as DSEI proclaims with every branded USB stick — then it’s all too easy to forget what the business is all about.

Uber is shutting down its free loyalty program later this year

The DCEU has become a crisis of Warner Bros.’ own making