These are the 7 best new features of Android Marshmallow

These are the 7 best new features of Android Marshmallow

You're going to want Android Marshmallow. Google's latest version of Android may sound like a single headline feature followed by a list of tiny improvements, but they all add up to one important update — there's a reason Google is calling this release Android 6.0.

Read next: The Android 6.0 Marshmallow review.

Marshmallow is going to make Android able to do a lot more for you, all while making key refinements across the OS that address longstanding issues. All in all, we're looking at a smarter, sleeker, and more useable Android. So yeah, you're going to want to update.

Of course, as always, when you can update is going to depend on who made your phone. Nexus devices will be updated almost immediately, but phones from Samsung, Motorola, Sony, LG, and others are going to be on their own timelines, some fast, some slow, some nonexistent. Those phones may also get support for some features and not others, depending on how the device is customized.

Google may be announcing Marshmallow's official release — coming next week — today, but it actually introduced its new features back in May. In case you missed the announcement or have forgotten what happened in the months since, here are the features we're most excited for in the new release of Android.

Google Now on Tap is easily Marshmallow's standout feature. It takes Google Now — the predictive assistant that's been beside your home screen for a couple years — and lets it crawl through your apps so that you can get extra info on basically anything almost instantly.

Here's how it works: your press and hold the home button while inside of any app, and Google Now will read the screen, look for anything interesting — like the name of a celebrity, an event, or a location — and then return information on what it sees in a little popup box on the bottom of the screen.

If someone texts you the name of a restaurant, for instance, Now on Tap might see its name and present you with its location on a map. Or if you're on a news story about a celebrity, Now on Tap might pull up their information from Wikipedia or give you the chance to jump to their page in the IMDb app.

It's an incredibly cool feature, and our initial tests showed it working quite well (albeit under a controlled environment). This is going to be a big deal in Marshmallow and — more than likely — future versions of Android as well.

This sounds insanely boring, but it's a really important update. To date, Android apps have asked you during their install process for permission to access everything and anything that they might need: things like your camera, location, message history, and so on. Often enough, you'll see all sorts of things that it seems like an app shouldn't need access to, but you don't have the option of saying no to just one item or asking what anything is used for.

Under Marshmallow, this is going to change. Developers will now be able to ask for permissions on a case-by-case basis. That means when you go to open up the camera in Instagram, for instance, Instagram could deliver a pop-up asking if you want to let it access your camera. That way you know exactly when an app is using a feature and why it's using it. It also means you can download and install an app, use most of it, but prevent it from doing one or two things that you disapprove of. 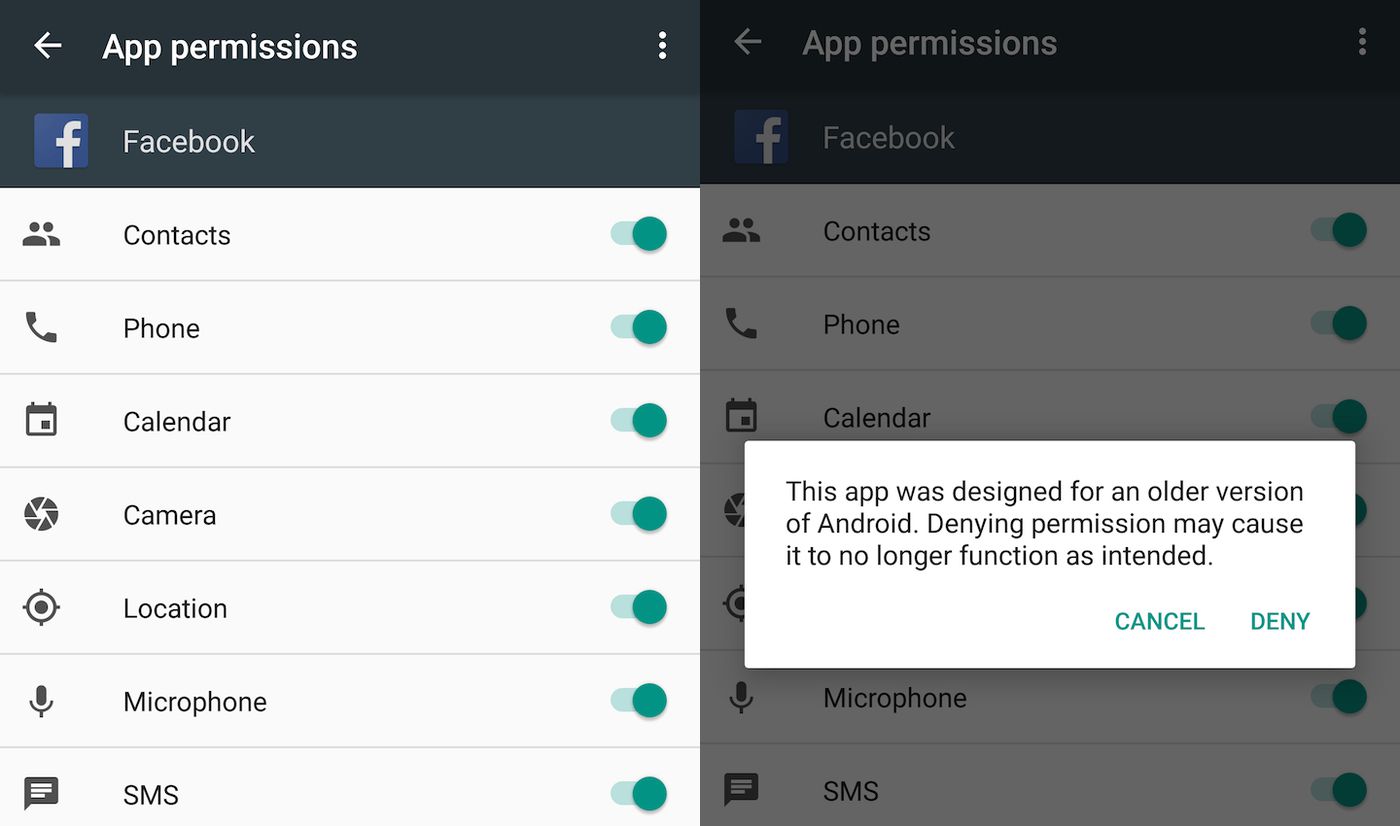 Apps will have to update to the new way of doing things before all of this starts to happen. For now, Marshmallow will still let you go into settings to deal with the apps you already have set up. Apple has dealt with permissions on iOS in this manner for a while now, so some people may already be familiar with this approach. Basically, it's a good idea, and it's about time it hit Android.

Everyone hates buying new cables, but this time it's worth it. USB Type-C (also called USB-C) is a tiny new reversible USB format that's kind of sweeping the tech industry. Before you know it, it's going to be used to charge most phones, tablets, and laptops, and for transferring data and video between devices. Marshmallow adds support for USB Type-C for Android phones and tablets, so there's a very good chance that your next phone will use it. Get ready — you'll never stab a Micro USB cable in the wrong direction again.

It seems like every new version of every operating system makes a claim about improving battery life, but Google's latest improvement may actually be a meaningful one. Doze, a new feature in Marshmallow, monitors how your device is being used and adjusts app activity accordingly. Basically, if you aren't using a tablet all day while it lies on your table, Marshmallow will simply pause your apps so they don't drain through your battery. That means apps won't be primed with new content the second you open them, but Google says a device's standby time could double. Not a bad tradeoff.

Another small but meaningful change in Marshmallow is the way that it handles copy and pasting text. Rather than making you jump up to the top of the screen to find and decipher the cut, copy, and paste buttons, Marshmallow will float the options directly above the text you've selected. It's pretty much identical to how iOS does it, and it's a solid change. Even if it's only a small change, it's for something that you use a lot.

Chrome works inside other apps

It's always frustrating getting kicked out of an app and over to the web where you have to wait for a site to slowly load, so Google is doing something about it. With a feature called Chrome Custom Tabs, Marshmallow will allow apps to preload certain web content before sending you over to an in-app Chrome tab. That idea is that you're still visiting a live-updating website, but the experience should be much smoother.

Feed refreshed 11 minutes ago • Not just you

”It’s the most rugged and capable Apple Watch yet,” said Apple at the launch of the Apple Watch Ultra (read The Verge review here). YouTuber TechRax put that claim to the test with a series of drop, scratch, and hammer tests. Takeaways: the titanium case will scratch with enough abuse, and that flat sapphire front crystal is tough — tougher than the table which cracks before the Ultra fails — but not indestructible.

Apple Music’s set to sponsor the Halftime Show next February, and it’s starting out strong with a performance from Rihanna. I honestly can’t remember which company sponsored the Halftime Show before Pepsi, so it’ll be nice to see how Apple handles the show for Super Bowl LVII.

The Elon Musk-owned satellite internet service, which covers all seven continents including Antarctica, has now made over 1 million user terminals. Musk has big plans for the service, which he hopes to expand to cruise ships, planes, and even school buses.

Musk recently said he’ll sidestep sanctions to activate the service in Iran, where the government put restrictions on communications due to mass protests. He followed through on his promise to bring Starlink to Ukraine at the start of Russia’s invasion, so we’ll have to wait and see if he manages to bring the service to Iran as well.

Mary Beth GriggsSep 25
E
Emma RothSep 25
We might not get another Apple event this year.