Sonos has a new Play:5 speaker that can make itself sound great no matter where you put it

With Trueplay, Sonos is solving sound problems with software

Wireless speakers have become essential gear for music lovers, running the gamut from portable Bluetooth devices to higher-end Wi-Fi systems from the likes of Denon and Samsung. Sitting atop all of them, however, is a company that’s been doing multi-room wireless audio for more than a decade — Sonos. Today it’s announcing two new products: an updated version of its flagship Play:5 speaker, and Trueplay, a software update that will let current and future Sonos owners custom-tune their speakers to sound ideal in any room, with any kind of placement.

Sonos is continuing to bet that the best way for it to differentiate itself is to provide a listening experience that is as close to what the artist intended in the studio as possible, and if the new products and its recent sales trajectory are any indication, it’s working.

The new Play:5 is a completely redesigned speaker, replacing the oldest model in Sonos’ lineup and incorporating a number of new technologies that Sonos expects to set the tone for many of its products moving forward. Rather than the five drivers included in the original model, the new speaker comes with six — three tweeters and three mid-woofers, all designed and custom-built from the ground up. Aesthetically, it ditches the metal grill for polycarbonate, and can sit in one of three different configurations: horizontally or vertically with the controls set to either the left or right.

It always knows which end is up

Speaking of those controls, gone are the physical buttons that have been in the last few Sonos products. They’ve been replaced by a trio of capacitive touch sensors that can start and pause playback, adjust volume, and even skip forward and back through tracks with a quick swipe. (The speaker always knows which end is up, so the controls are consistent no matter which way it's configured.)

As for the sound itself, I was able to briefly hear the new Play:5 in a couple of different environments at Sonos’ Santa Barbara headquarters, and my initial reaction was that it is punchy and robust on the low end (despite being a closed design, unlike the original, ported Play:5), extremely articulate and nuanced in the mids and highs, and straight-up loud. Sonos speakers have always been impressive in their ability to crank up the volume without any kind of distortion, and the new Play:5 pushes that even further. It will take more extensive listening to see how and where it would ideally fit into someone’s home, but there’s no doubt Sonos makes some of the best-sounding hardware out there — and the Play:5 better be. At $499, it’s $100 more than the speaker it’s replacing. 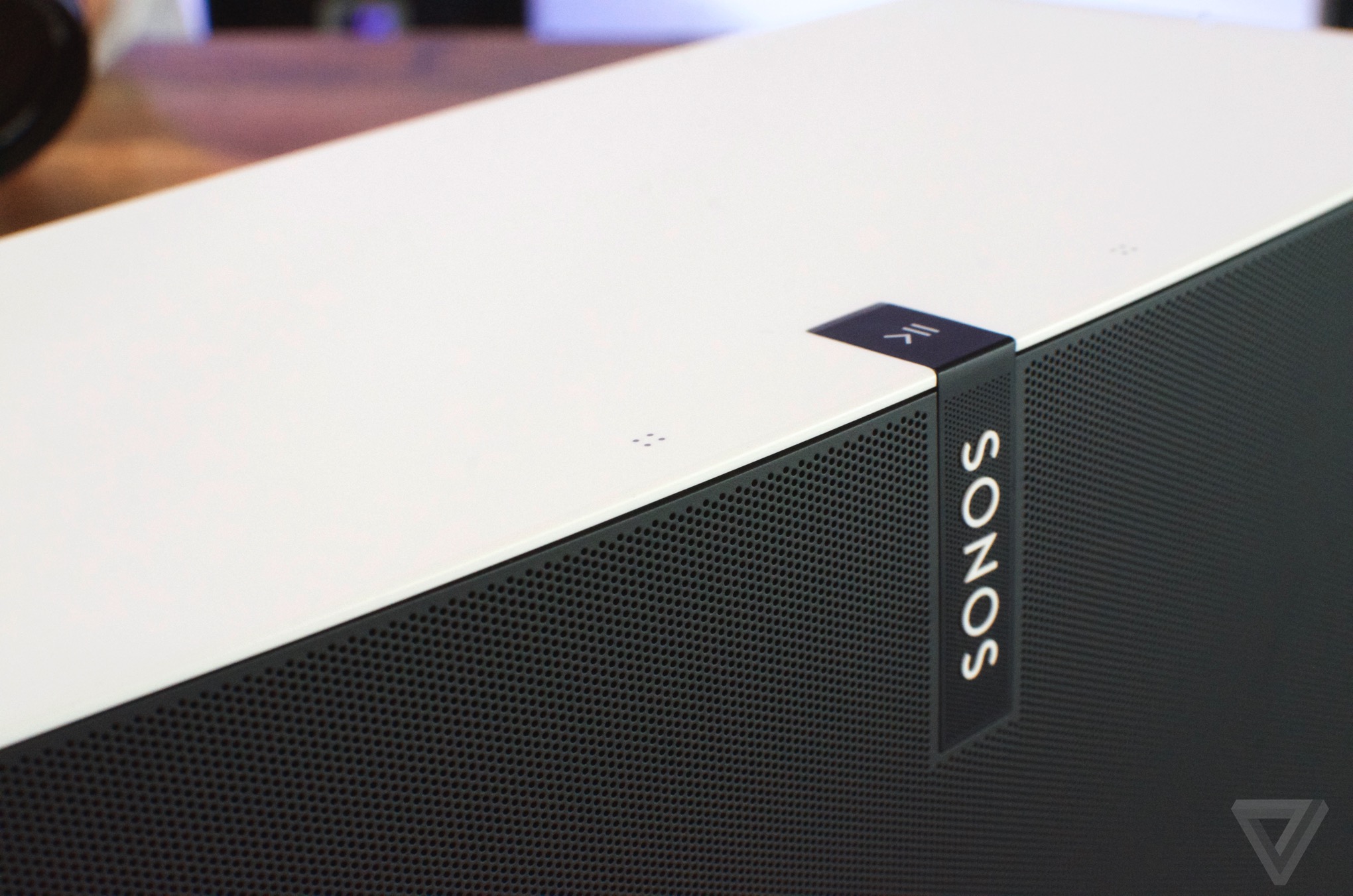 Making that hardware sound even better is what’s behind Trueplay, and while it may sounds like a gimmick, it’s one of the most impressive things I’ve heard from the Sonos lineup. The idea is simple: there are certain rules about where one should place a speaker for optimal audio, but most people are never going to bother. So instead, speakers get stuck in corners or on shelves. That changes the character of the audio you’re hearing, so even if you’re listening to an amazing speaker, the placement could still make the sound suck.

Set-up involves waving your iPad like you're painting a house

Trueplay uses the microphone on an iPhone or iPad as a calibration tool to tweak the settings on the speaker, so no matter where you have it placed, you’re going to end up hearing it the same way that Sonos intended (or so they claim). I was skeptical going into this: I fully expected it to be some sort of minor EQ tweak that would brighten up a speaker or partially clean up a muddied low end. Instead, it’s able to dramatically alter the sound, going so far in one demo as to make a speaker hidden inside a cabinet sound like it was out in the open. Of course, that was Sonos’ own demo, but even briefly testing Trueplay with a Play:1, I was impressed by the versatility it provided. Whether up against a wall or hidden behind a door, the sound was remarkably improved, opening up placement options I would have never considered before.

Convincing users to use Trueplay will be another matter, however. The calibration process involves running a routine on the Sonos iOS app (Android set-up is still in development), and waving your device around like you’re painting the side of a house while a strange combination of soft noise and bleep-bloops play. I definitely felt a bit goofy, but the payoff was worth it. It’s just a matter of educating mainstream consumers about its value — something Sonos struggled with in its early days, but has gotten better about since landing in big-box retailers like Best Buy and Target. 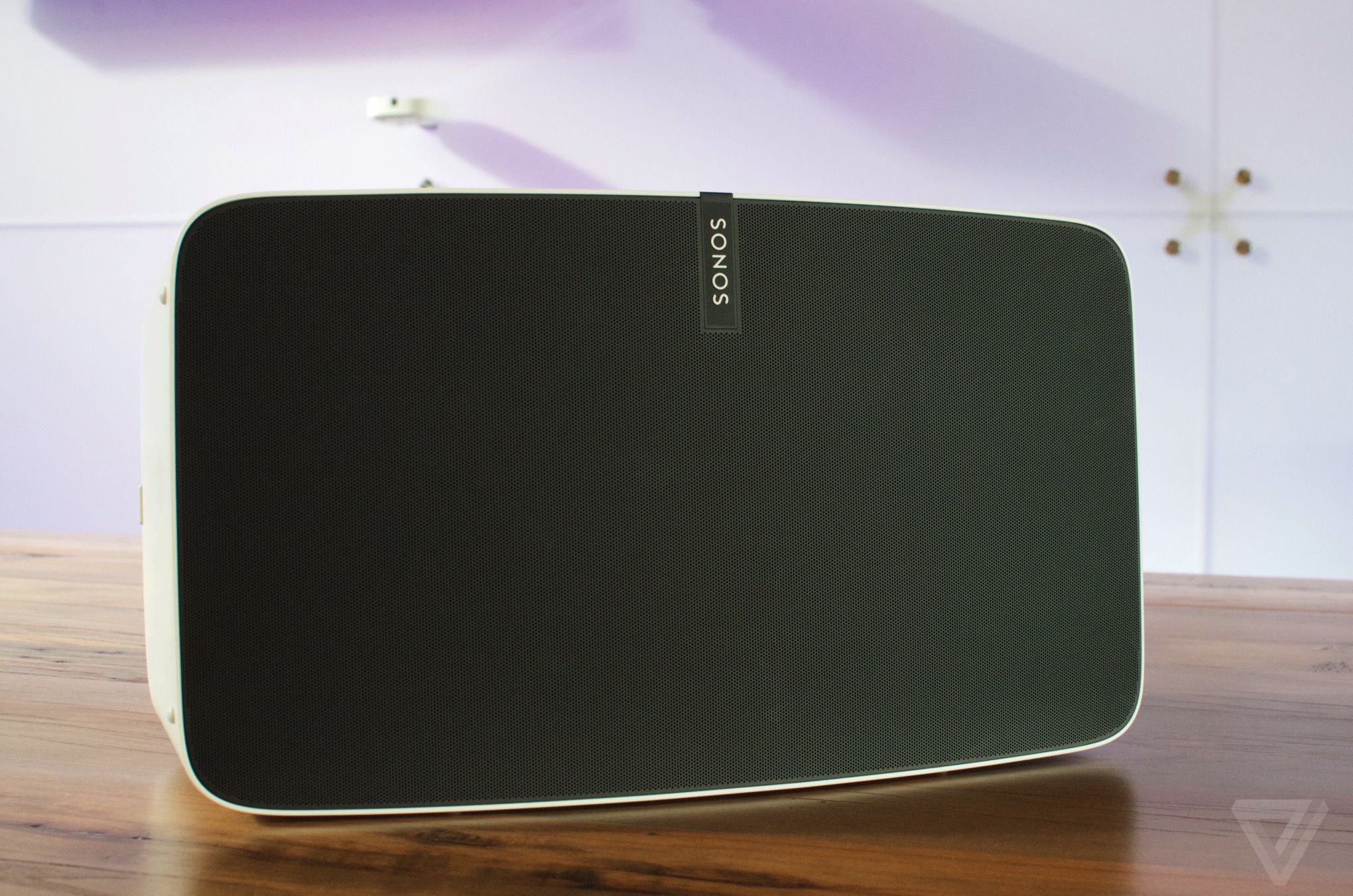 That visibility, and a product line that runs from the $199 Play:1 all the way to the $699 Playbar home theater system, has made Sonos’ products more broadly accessible. As a result, the company doubled revenue in 2013 to $535 million, and hopes to reach $1 billion this year. ("You’re in the ballpark," CEO John MacFarlane told me when I asked if they were still on track to hit the number.)

Most consumer electronics companies hope to sell you items that you may replace every year or two, but Sonos is interested in selling you one speaker for one room, then another for another room, until your entire home is able to stream music no matter where you are. To pull that off, it needs to build long-term relationships with its customers above all else, which demands the company support the products it has already sold, and design them with future-proofing in mind. It’s why something like Trueplay is rolling out to the entire product line, including the older, discontinued Play:5 (Playbar support is likely on the way, as well). It’s also why the company has included two microphones inside the new Play:5 that don’t even have a purpose yet — but could one day conceivably be used to help the speaker tune itself or provide other "smart" functionality.

Of course, this is still a market filled with low-cost devices for people who are interested in something quick and easy — and may have even spent most of their life listening to music on terrible headphones or cheap computer speakers. There’s also the issue of the Sonos app, which can often feel like a cumbersome kludge in a world of AirPlay and Chromecast devices. But Sonos is convinced that hearing is believing, and that as music subscriptions continue to go mainstream it will make it that much easier for the company to grow. "That’s just gonna make the friction in explaining what a Sonos is so much easier," MacFarlane says.

Further to that point, Sonos still has one of its most high-profile partnerships to look forward to later this year: Apple Music. The streaming service was missing from Sonos when it launched earlier this year, and while Apple Music has had some bumps early on, MacFarlane sees Cupertino’s involvement as a watershed moment for the industry. "I won’t make any prognostications on how many subs they’ll have, or anything else, but what they did was they just provided clarity to a lot of differing views on where music is going and it aligned everybody," he says. "So whether you use Spotify, or use Apple, or use Pandora, or use Tidal, for the greater music ecosystem the greater point is there are more people paying an on-demand service, and that makes the whole pie bigger."

The new Play:5 and Trueplay will ship later this year.