Samsung's Gear S2 is its best-looking smartwatch yet

Samsung and smartwatches have had a tenuous relationship. It's not for lack of trying — Samsung released six different smartwatches before Apple even launched one — it's just that none of them have been particularly good. Chunky designs, slow performance, and limited software have all been things that have plagued Samsung's smartwatch efforts since they began in 2013. That all may be changing, however, as the recently announced Gear S2 is the most promising smartwatch I've seen from Samsung.

The Gear S2 is unlike the rest of Samsung's smartwatches because it actually looks like a watch that I'd want to wear every day. That's largely because it's round, but also because it's much slimmer and smaller than the cuff-sized gadgets Samsung previously made. It looks less like a wrist computer and more like a traditional watch that happens to do smart things, and that's pretty great. That's the same whether you're looking at the sportier standard model with its rubber strap or the dressier S2 Classic and its leather band. Both are comfortable and flattering on my wrist, and look far better than many of the other smartwatches I've worn in the past. 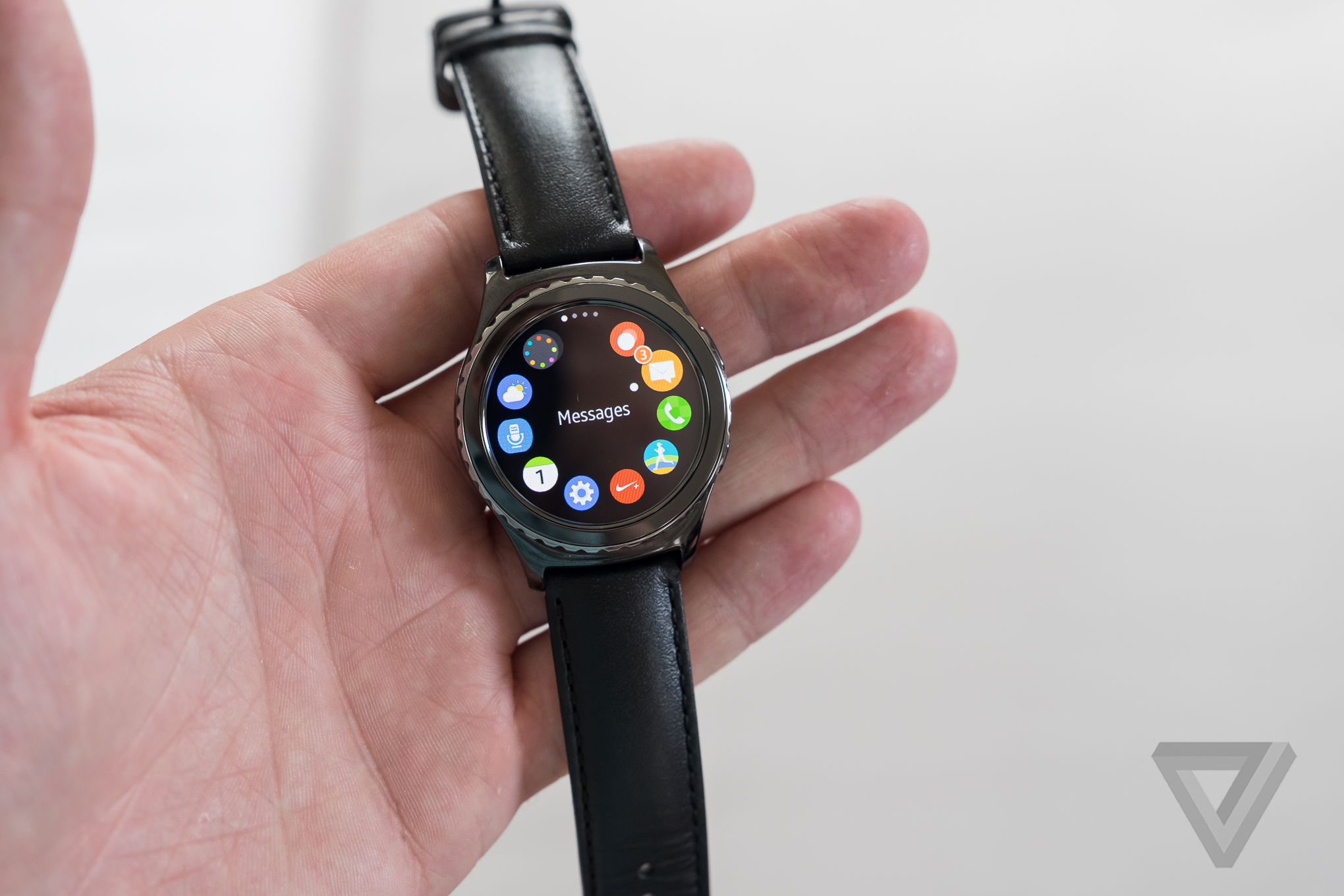 The impressive things with the Gear S2 don't end with its new design: Samsung's actually figured out a really smart interaction model for smartwatches that I'm shocked no one else has done yet. There's the touchscreen, yes, just like most other smartwatches, and the Gear S2 has a couple buttons on its side for home and back. But its real trick is in the rotating bezel, which lets you quickly and easily scroll through lists, apps, watch faces, and whatever else you might be looking at on the screen. It's more predictable and intuitive than the Apple Watch's Digital Crown and is a joy to use.

The S2's screen is colorful, sharp, and bright, and looked great in the few minutes I got to spend with the watch. It has an always on ambient mode — like many Android Wear watches — that makes it easy to quickly check the time. But this isn't an Android Wear watch: it's running Samsung's proprietary Tizen platform. In the past, that was a huge red warning flag, but Samsung's cleaned up its act, and the software on the Gear S2 is fast and intuitive. There are lots of different watch faces to choose from, including new "dynamic" faces that can update with various bits of information, and you can see all of your phone's notifications and reply to incoming messages with canned responses, emoji, or text dictated by voice. 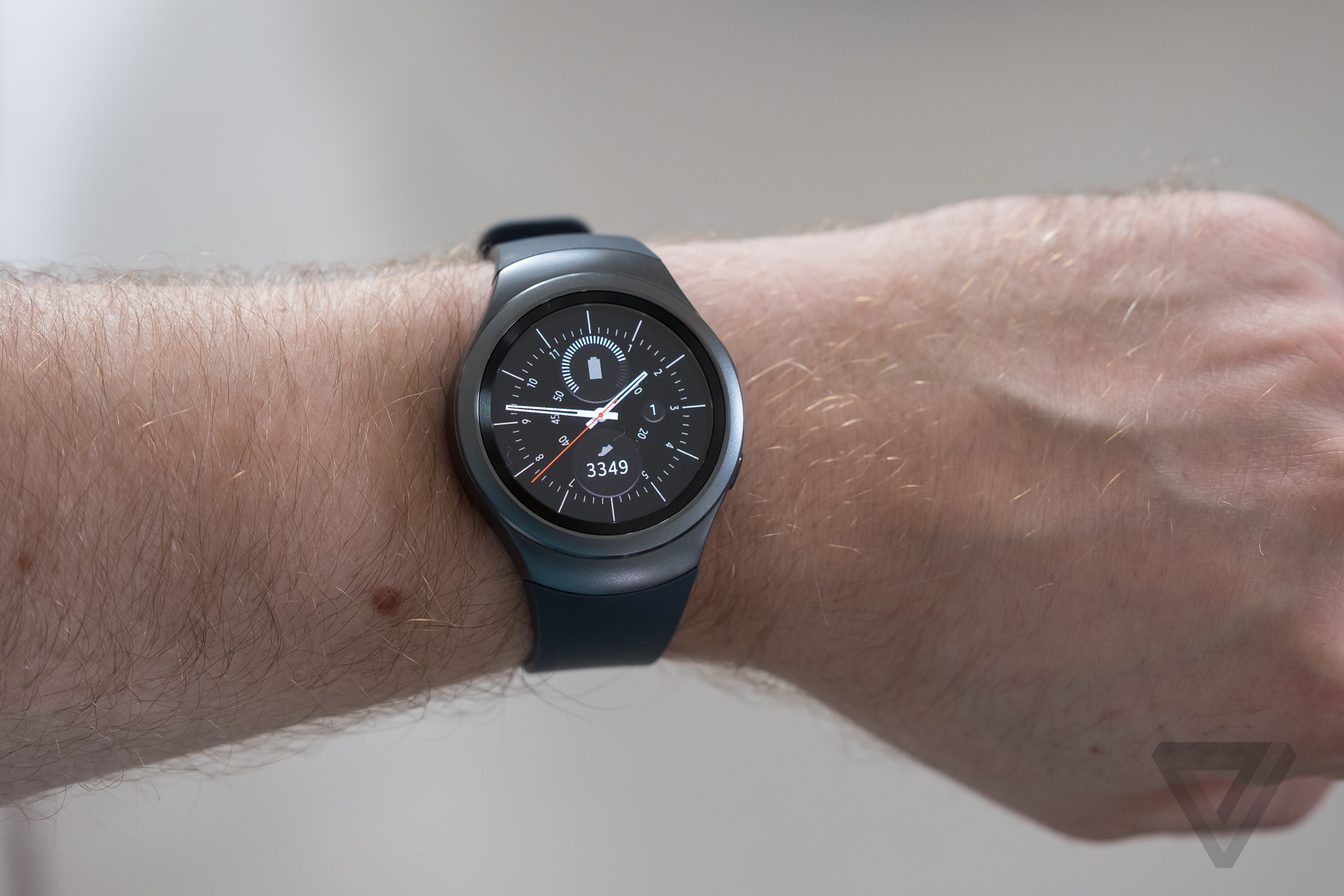 One of the most notable updates with the software is that the Gear S2 will work with any phone running Android 4.4 or higher with 1.5GB or more of RAM. That's a big difference from Samsung's earlier Tizen watches, which were limited to the company's own smartphones. Samsung says that certain features, like Samsung Pay (the Gear S2 supports NFC-based mobile payments), are only available when the watch is paired with a Samsung phone, but for the most part, everything should work with other Android phones. The big question mark might be with third-party apps — Samsung says it plans to have about 1,000 apps available for the watch when it launches, and it worked with about 100 developers to specifically create app experiences for the Gear S2. But it's hard to see many app developers devoting time to yet another smartwatch platform when Apple and Google are already in the mix.

There are other questions that may make or break the Gear S2, and we'll have to wait until we are able to spend more time with it to answer them. Samsung says battery life should be two to three days between charges, and the Gear S2 comes equipped with a magnetic wireless charging dock (not unlike the one that comes with Motorola's Moto 360) that's far nicer than the janky clips the company used before. That's longer than its previous models and longer than most other smartwatches, so we'll have to see if it lives up to the claim.

A handful of questions remain

Samsung also isn't yet telling us the price of the Gear S2 or S2 Classic, and that could determine whether or not this thing's a hit. The company is saying that the Wi-Fi version will be available in early October, and the wireless carriers will announce availability of the 3G model at a later date. Either way, we're eager to learn more about and spend more time with the Gear S2, which is already more than we could ever say about Samsung's earlier smartwatch efforts.