Looking back, Mike Sego says, he was always meant to work in education. His dad taught fifth grade for 37 years, three of his older siblings were K-12 teachers, and he spent free time as a kid grading papers for fun. But like so many people who arrive in Silicon Valley after college, Sego first started working in tech. He worked on The Sims, and later got to know Mark Zuckerberg when his virtual pets game, (fluff)Friends, was one of the first hits on Facebook’s new games platform. Around that time, Zuckerberg had become interested in education as part of his philanthropy, donating $100 million to Newark schools in 2010. After a stint as CEO of Gaia Interactive, Sego decided to turn his attention to education. He called Zuckerberg and asked if they could work together.

Not long after, Sego was touring Summit Denali, a public charter school in Sunnyvale, California. With him was Priscilla Chan, wife of the Facebook founder and his partner in philanthropy. They had been drawn to Summit Public Schools because of their striking success in preparing students for college: 99 percent of its graduating students have been accepted into at least one four-year college. And 55 percent of graduates go on to complete college, compared to a national average of 28 percent. The results are particularly compelling given the diverse makeup of the student population: only 20 percent of students are white, 48 percent qualify for free or reduced lunch, and 13 percent are English language learners.

99 percent of students are admitted to a four-year college

Summit says it outperforms most schools thanks to a program that lets students learn at their own pace, work on projects rather than listening to lectures, and receive regular one-on-one mentoring from their teachers. Educators there call it personalized learning, and being a product of Silicon Valley, it’s supported on the back end by software.

Priscilla Chan was sufficiently impressed with her tour that she told her husband he should see it himself. After a visit of his own, he asked Summit’s founder and CEO, Diane Tavenner, if she was seeking donations. Actually, Tavenner said, what Summit really needs is code. 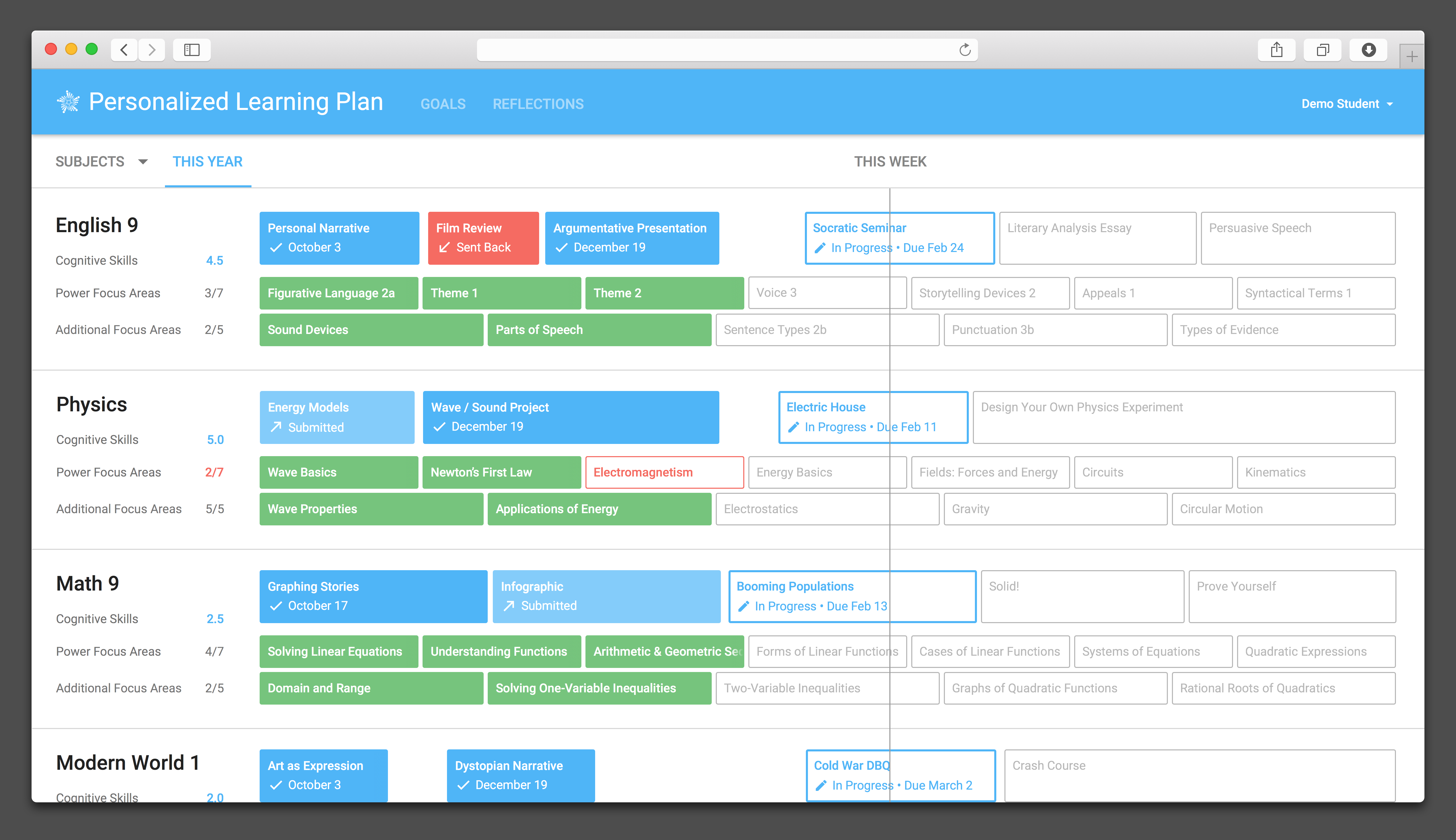 What followed was an improbable collaboration that resulted in the announcement of a partnership today between Facebook and Summit that will make their software available to other public schools. A pilot program is taking place around the country this year; eventually, Facebook and Summit plan to offer the software to any school that wants it. The partnership, which Sego is leading, has already produced a working tool that is used by students and teachers in 13 states and 20 schools. Facebook is giving it away for free, and says it plans to do so indefinitely. But Facebook’s tentative move into education, which in some ways resembles Google’s efforts in the classroom, could open up new business possibilities down the line — and might send a shiver down the spine of smaller education-technology startups in the meantime.

To get an idea of what impressed Zuckerberg and crew about Summit, it helps to spend a day at one of its 11 schools. I stopped in at Denali, a middle school that opened in 2013, during the third week of instruction. The school occupies a single square-shaped building in an office park near US Highway 101, Silicon Valley’s main artery. Denali currently serves about 300 sixth, seventh, and eighth graders, and plans to eventually expand into a combined middle and high school with 700 students.

"It's this black hole of an achievement gap right here."

The campus is fully indoors — though kids run around outside the building during P.E. — and most of the classrooms don’t have walls. Joe Bielecki is the school’s founding executive director — what another school might call a principal. A former middle school teacher, Bielecki says he was driven to start Denali because of the large number of underperforming schools in Silicon Valley. "It’s this black hole of an achievement gap that’s right here," he says. Denali draws from 40 elementary schools in the area, and students are picked through a lottery system. 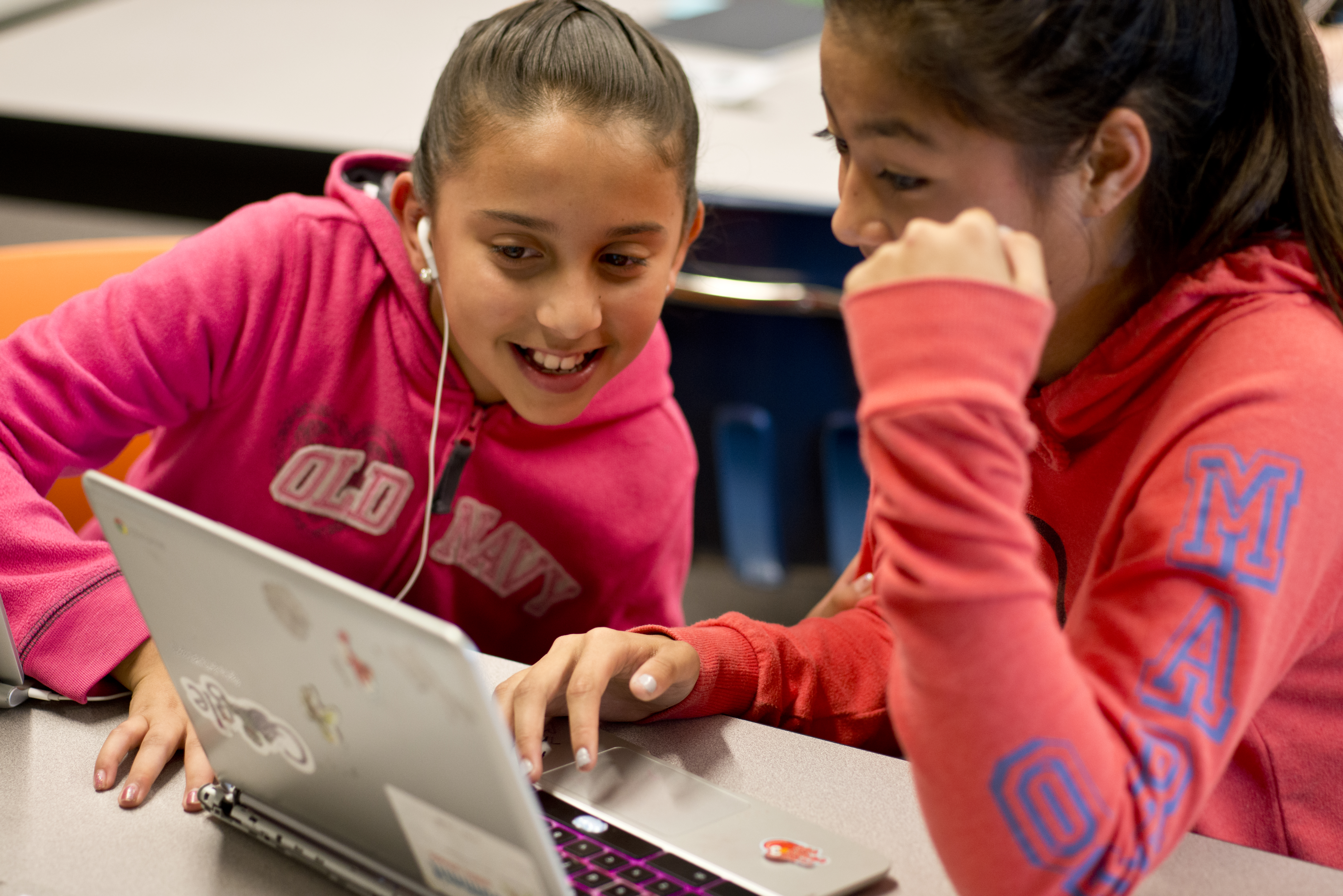 The Summit curriculum has four basic parts. There’s "project time," where students work in teams on projects: building a model of a lunar lander, say, or modeling population growth for a country. There’s "personalized learning time," where students learn traditional subjects like science, math, and reading. The twist is that they’re generally learning not with textbooks but with Chromebooks — surfing through "playlists" of mostly free online educational content. And they’re doing it at their own pace, with their teacher serving more as a guide than a professor. Class sizes are smaller than the California average at 25 kids; students are required to pass the same standardized tests as their peers in other schools.

Tavenner founded the first Summit high school in 2003 in Redwood City; not long after, it was ranked as one of the nation’s best public schools by Newsweek and US News & World Report. After several years, Tavenner said, she began thinking about what it would take to replicate Summit's success on a series of new campuses.

"Why do we have public school in America? Why hasn't it changed in a hundred years?"

That kicked off a new process of rethinking the whole educational process, she says. "It put us on this pathway to really just question all the assumptions about school," Tavenner says. "What is school, and what’s the purpose? Why do we have public school in America? Why hasn’t it changed in a hundred years?"

The resulting program means that every student is in a different place in the curriculum at any given time. Before Facebook began working with Summit, tracking students’ progress fell to a single engineer, who stitched together a personalized dashboard for them connected to various third-party services. But the software was slow, it broke sometimes, and students were always having to log into various accounts for all the services on their Chromebooks. 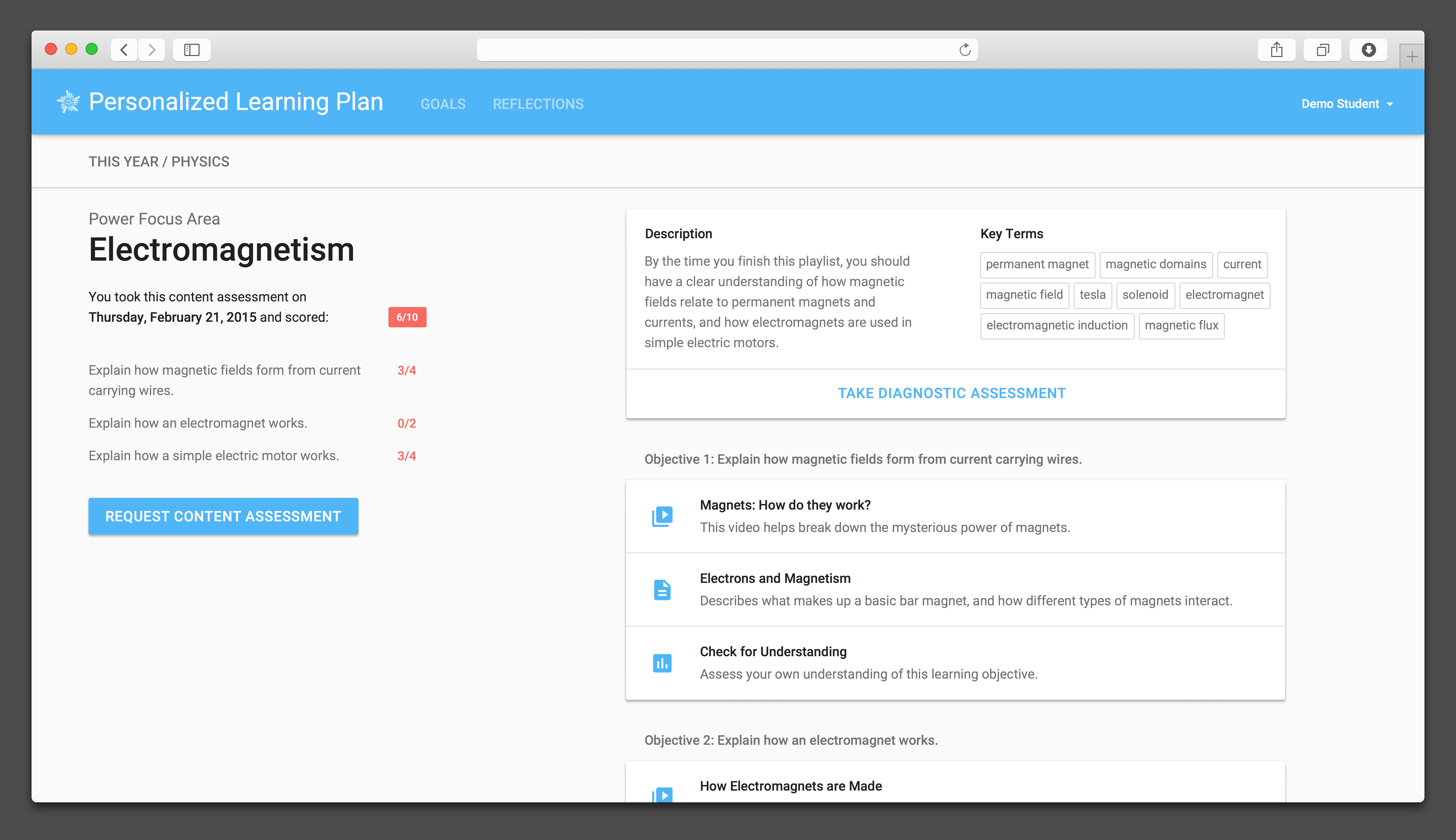 Since starting work together in earnest last year, Facebook has dedicated eight people full time to the project. They work for Facebook, but the project is separate from the main organization. Students don’t log in with Facebook, and engineers handle data in accordance with the White House’s Student Privacy Pledge, which prevents them from selling student information or using their behavior to target advertising at them.

Working with Summit’s team, Facebook has produced a suite of software known as the PLP. (It can stand for "personalized learning platform," or "personalized learning plan," but everyone just calls it the PLP.) The software pulls together an overview of the year’s curriculum, a project view that lets students organize their work in a calendar, and course materials and tests. The PLP lets teachers review students’ work, and also collaborate with one another on building new lesson plans.

"IT has helped me learn better than in my elementary school."

At Denali, students and faculty say early results have been good. "It’s easier and faster," says Gabriela Castaneda Soto, an eighth grader at the school. "When we want to collaborate, we can help each other and make sure that both of us are understanding the subject. It has helped me learn better than in than my elementary school." Brian Johnson, a science teacher at the school, says he has always tried to personalize lessons. But it was difficult to track progress for every student without the benefit of software. "It was always just really hard," he says. "Now we have this PLP tool — it’s a tool that allows us to actually do that better than we could before. It makes it a lot easier for me."

Facebook isn’t the only internet giant building education software. Google launched Classroom last year as a layer on top of Google Drive for schools using its apps for education suite. The software allows teachers to post class announcements, assign work to students, and collect and grade their assignments. It’s built for a more traditional classroom — for now, anyway. 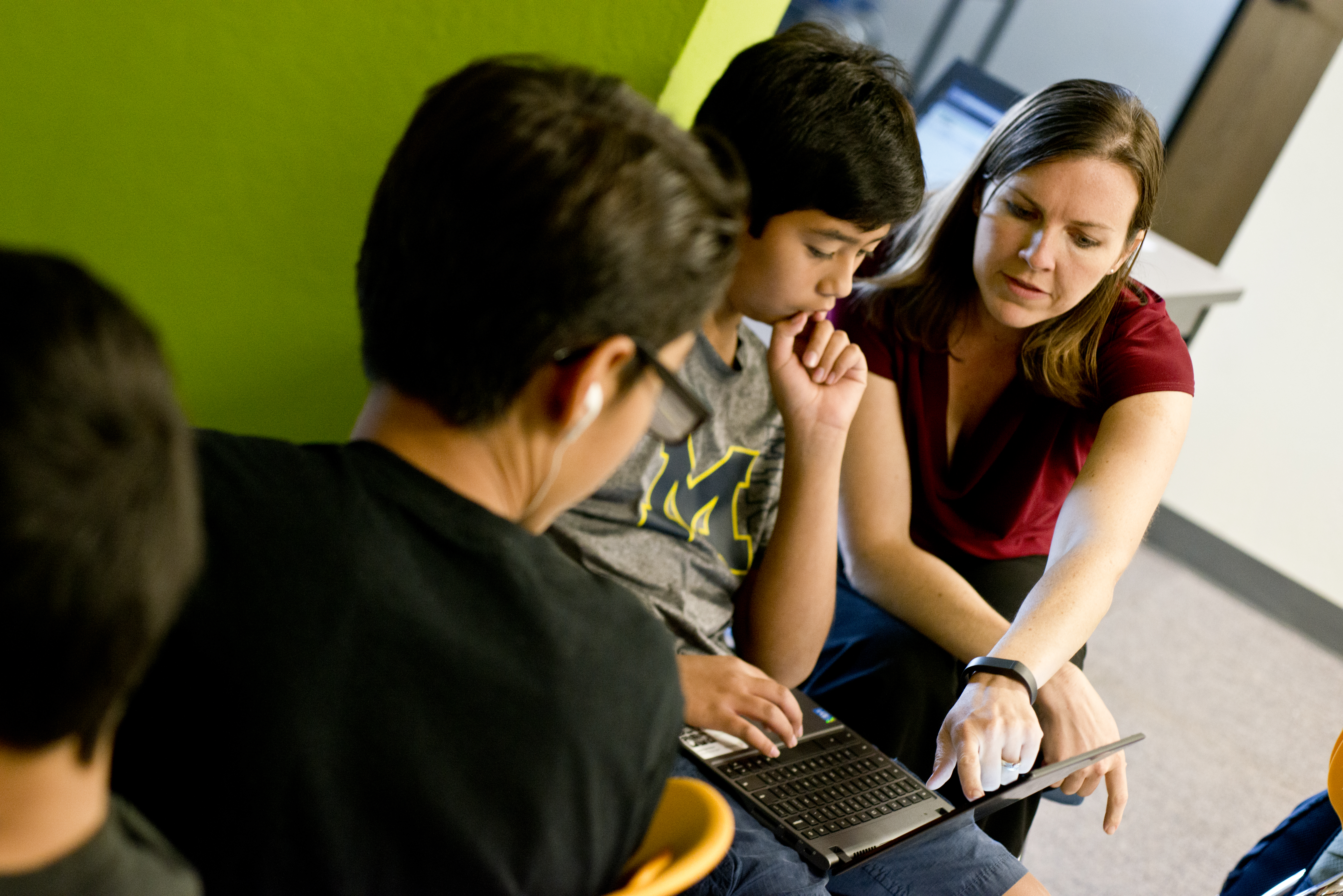 Facebook’s move into education may be unexpected, but it seems to be sincere. The project has won fans at the top of the organization, including the company’s chief operating officer, Sheryl Sandberg, and its chief product officer, Chris Cox, who wrote the blog post todayannouncing the partnership. "This is personal for those of us working on the team here at Facebook," Cox wrote. "Through our kids, our families, and the teachers in our lives, we’ve seen that there’s an opportunity to help apply our skills to the future of education, and we all wanted to find a way to help make an impact by doing what we do best — building software. With Summit, it’s starting to feel like we’ve found the perfect partnership."

Still, there’s a nagging question of why Facebook would build what is essentially an internal nonprofit organization with seemingly little connection to its core mission. At one point, Facebook considered launching PLP as a stand-alone company working on its education efforts. But ultimately Zuckerberg decided he wanted the team to focus on building software, rather than mundane tasks like hunting for office space.

"This is personal for us."

Sego sees the connection between the core of Facebook and PLP this way. "We are aligned with the broader mission Facebook has to not just connect the world, but help make those connections improve people’s lives — and in many ways, grow the knowledge economy," he says. And while a "freemium" version of the software has been discussed, Sego says a business plan for PLP is a long time away. "It’s not really on the roadmap," he says. "It’s not our priority right now."

But what if Facebook changes its mind about education and abandons the platform? The company’s partnership with Summit extends for three years. At the end, if Facebook decides not to continue, Summit will get to keep the PLP code Facebook has developed. But Tavenner believes the partnership will endure. "In three years, it’s our joint belief that the platform will be in a really stable place," she says. "We will be fine, if for some reason [Facebook quits]. And that was important to both of us."

Facebook says it’s committed to education for the long term. The thing about founder-run companies like Facebook is that the founder’s priorities often become the company’s. And if that’s the case, what began as philanthropy for Mark Zuckerberg could represent a whole new plank of Facebook’s mission.