Steam offers PC gamers the option to return video games. I used to be skeptical of the notion. Video games can be big. They can take time to reveal their best self. I am only a couple hours into Mad Max, and if I hadn’t received the copy for review, I would be demanding a refund.

Mad Max isn’t a mediocre video game, doomed by technical flaws or shoddy art design. Mad Max is beautiful, and, unlike so many better games released this year, runs spectacularly on PC, as if evidence its creators had plenty of time to polish. And unlike so many poor games released this year, Mad Max's developer took creative risks. Mad Max, you get the sense, was meant to be a big budget game with soul and something to say. Unfortunately, Mad Max, a game that is actively bland, is like a teenager with big ideas about how the world works but without the vocabulary nor confidence to express them. A half-hour is enough time to grok the game is flawed at its core.

I’m surprised just how confidently this game whiffs. A year ago, my expectations for the Mad Max video game far surpassed those for Mad Max: Fury Road. The film’s director George Miller had spent the two decades prior making family-friendly movies about talking pigs and penguins while the film went through development hell. Work on Mad Max: The Video Game, began around 2009 with the involvement of Miller and Cory Barlog, a game designer best known for writing and directing God of War 2, but Barlog eventually left, and by 2014, Miller was no longer, publicly speaking, associated with the game, which at the time was and wasn’t connected to the film, depending on when and whom you asked.

Both projects sounded troubled from the limited rumors finding their way to the press, but Avalanche Studios, the developer of the video game, appeared better positioned to turn things around. Video game developers, who often operate on tight budgets and impossible deadlines, have a habit of making gold — or at least silver — from a shit deal. And Avalanche in particular had the pedigree; its most recent game, Just Cause 2, featured car combat that allows the player to grapple onto a car, shoot the driver, and steal the vehicle with a few quick button taps. You know, the trappings of Mad Max.

Mad Max zigs wherever Just Cause zags. Just Cause is an open-world game that motivates the player to take risks. Cars can be driven down mountains with the player riding them like surfboards. There’s no limit to how far a car can drive, and there's plenty of ammunition and explosives for the player when they’re on foot. Mad Max drops the player in the wasteland, and punishes risk-taking and adventure. Jumping off a cliff damages the car, driving into the distance uses fuel, and keep your finger off the trigger, because ammo is sparse. Early in the game, the player learns to collect scrap, wait while the car gets repaired, and locate gas and water. I never thought I’d call a game about post-apocalyptic car battles dull, but here I am.

On an arguing-at-a-cafe-over-video-game-theory level, I get it. Max’s world is a dangerous one, and the original films built tension on the sensation that these cars and the people inside them are incredibly vulnerable, relying on faulty materials and limited resources. A different game about survival might have made these work, but deep down, Mad Max wants to be an action game, and so it sends you from one mission of vehicular manslaughter to the next. Go have fun, it says, just not too much fun. Taking care of the car, like taking care of a someone else’s puppy, is charming for a few minutes until it becomes a chore.

This design is creatively risky and paradoxically also smells of top-level notes from the publisher Warner Bros. WB has made a name for itself in the game space from the Batman: Arkham series, with its open-world and hand-to-hand fighting, which Mad Max imitates to poor effect. The latest Batman, Arkham Knight, was released alongside a marketing campaign that highlights the pleasure of roleplaying. Be the Batman, the posters said. In Mad Max, the developers want you to be Max, without considering the hard truth that Max's life sucks. That the game doubles down on the worst parts of this crappy existence — finding gas, repairing cars, driving long distances — is like making a Batman game in which you attend Wayne Enterprises business meetings and wax the batsuit. 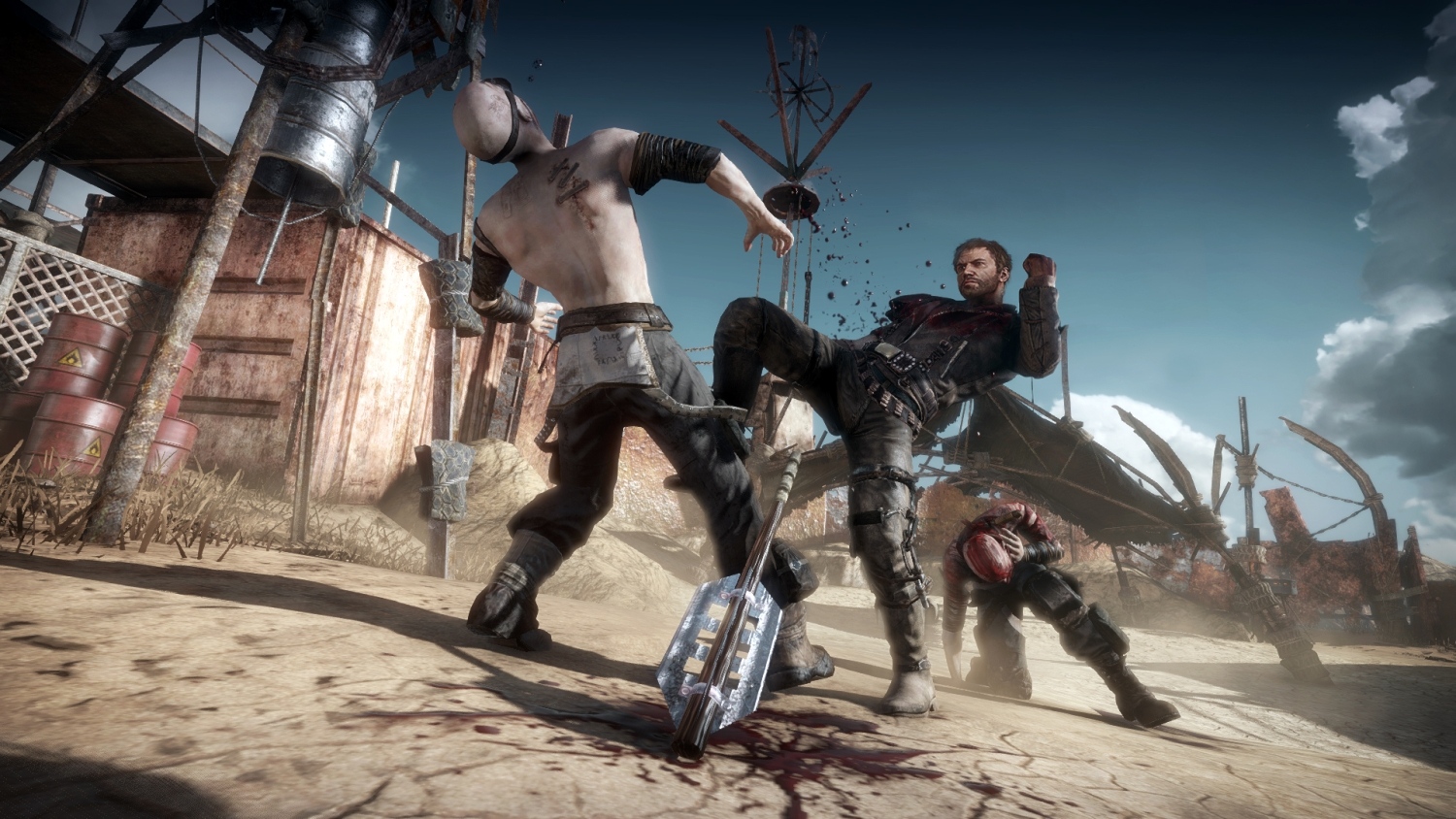 Speaking of chores, the game doles them out like vegetables to unsuspecting trick-or-treaters. New locations are often introduced by action cut-scenes interspersed with playable sequences in which Max must walk around to collect items. If you’re considering a career designing games, remember to do the opposite. I don’t need to be Max while he looks for wires or a spring, I need to be Max when he’s jumping off cars and fighting mutant man things. The game begins with a wild showdown, culminating with Max pushing a chainsaw into a man’s skull, but none of this is playable. It’s the inciting incident! It’s the beginning of a vendetta! Why would the game distance the player from the most important moment?

Mad max the game could learn from Mad Max the film

I mentioned the film, which we now know to be a blockbuster miracle, an action flick with a progressive slant that keeps its momentum by never repeating itself. Mad Max the game is none of these things. Its characters are the same old masculine tropes, its aesthetic never achieves the high-contrast glory of its cousin, and it is nothing if not repetitive. Do you like generic quests, close-quarters combat, and large bases? Oh the architecture, how it whisks the brain into goop. Each interior is a maze, as if the builder said, "Listen, I know we’re low on metal and food and labor, but what if we made this place a pain in the ass to get around on the off chance that Max guy shows up to kill us all."

After one such base — which I backtrack through to escape, because the fun option, jumping down the side of the building, leads to my death — I find myself staring into the wasteland, a man gone mad, much like Max: mad because the game has driven me crazy, and mad because I feel the critical obligation to keep playing, because upgrades to the car, like flames bursting from its sides, make the game a little more enjoyable. But those come after the window for returns, and frankly, I can’t recommend anybody give a couple hours of their valuable time to something built from the ground up to be a fun game that isn’t fun.

I try to leave the base by climbing onto a walkway, and though it’s only 4 feet high, Max fails. This isn’t one of the designated claimable paths, I realize. So I just walk into the distance, leaving behind my car and any hope of survival.