Alcatel envisions the smartwatch as an ugly Casio G-Shock clone

Share All sharing options for: Alcatel envisions the smartwatch as an ugly Casio G-Shock clone

We've seen plenty of smartwatches at IFA 2015, led by Samsung's Gear S2 and the second-generation Moto 360. Alcatel's joining the heap with the announcement of its Go Watch, but first impressions result in it falling pretty far down the list. Let's start with the good; the Go Watch is compatible with both Android and iOS and, like any half-competent smartwatch, will notify you of texts, calls, emails, phone calls, and local weather. And that's pretty much it as far as functionality goes.

And just look at that bezel. Alcatel was clearly inspired by Casio's G-Shock with this design; calling it a blatant ripoff isn't entirely unfair. The bulky designs allow for a full-size microUSB port to fit on the watch, so at least charging it up should be pretty convenient. There's no proprietary charger to carry everywhere. The Go Watch also has a heart rate monitor and a bizarre feature the company calls its "emotion pulse measurement." I'll just let the press release explain this one:

The Go Watch brings a unique experience and lets users hack their emotions. How? Press the Go button to trigger an emotionpulse measurement. An emotional graphic will be created based on the input from the gyroscope, heart rate sensor and accelerometer. Select a theme that matches your mood the best to create your personalized emotion pulse. You can instantly share your unique emotion pulse on social networks or even set it as the wallpaper of your Go Watch.

Okay. Sure. Anyway, Alcatel says the watch is waterproof, dustproof, and will typically last between two and three days on a charge. And you can swap out that front casing for options with different colors; same goes for the bands.

The company is also releasing a rugged, life-proof phone to go along with Go Watch. It's called the Go Play, and offers a ruggedized build that's waterproof (IP67), shockproof, and dust proof. Alcatel says that design allows users to shoot photos and video underwater with the phone's 8-megapixel camera. Fair enough. I guess that's something my Galaxy Note 5 can't do. The company notes that this thing also has a software feature that lets you "record cool stuff playing on your mobile screen and add a voiceover" with the Go Play's microphone. Look, it's plain to see no one will be buying these over today's Android flagships; they're clearly seated at the lower end of handsets. Our hands-on impressions left both the Go Watch and Go Play feeling a bit cheap, but at least they've got that durability thing going. Alcatel hasn't yet announced pricing or release date for either device. 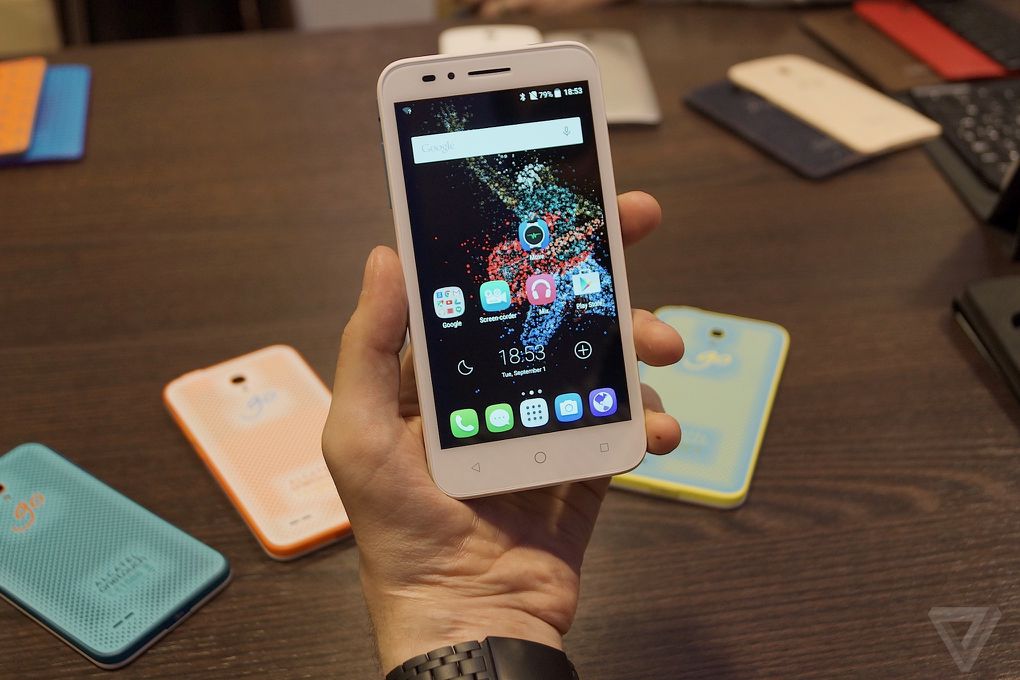