The Ricoh Theta S captures you and the world around you

Taking pictures or shooting video pulls you out of the moment. There's always a screen or viewfinder blocking your view, and in the end you never wind up in the photos that you're taking. You never get to be a participant in the moments that you're documenting.

At least that's the way James Malcolm, the president of Ricoh America, sees it, and it's the thinking behind the Theta S — a $349 360-degree photo and video camera that's supposed to let you relive moments you capture without excluding you from the scene.

Malcolm's claim wasn't all talk. I took a few photos with the Theta S at its unveiling yesterday, and it wasn't until I pinched and zoomed around all 360 degrees of one photo before I saw there was a woman performing aerial acrobatics just a few feet behind and above my head. 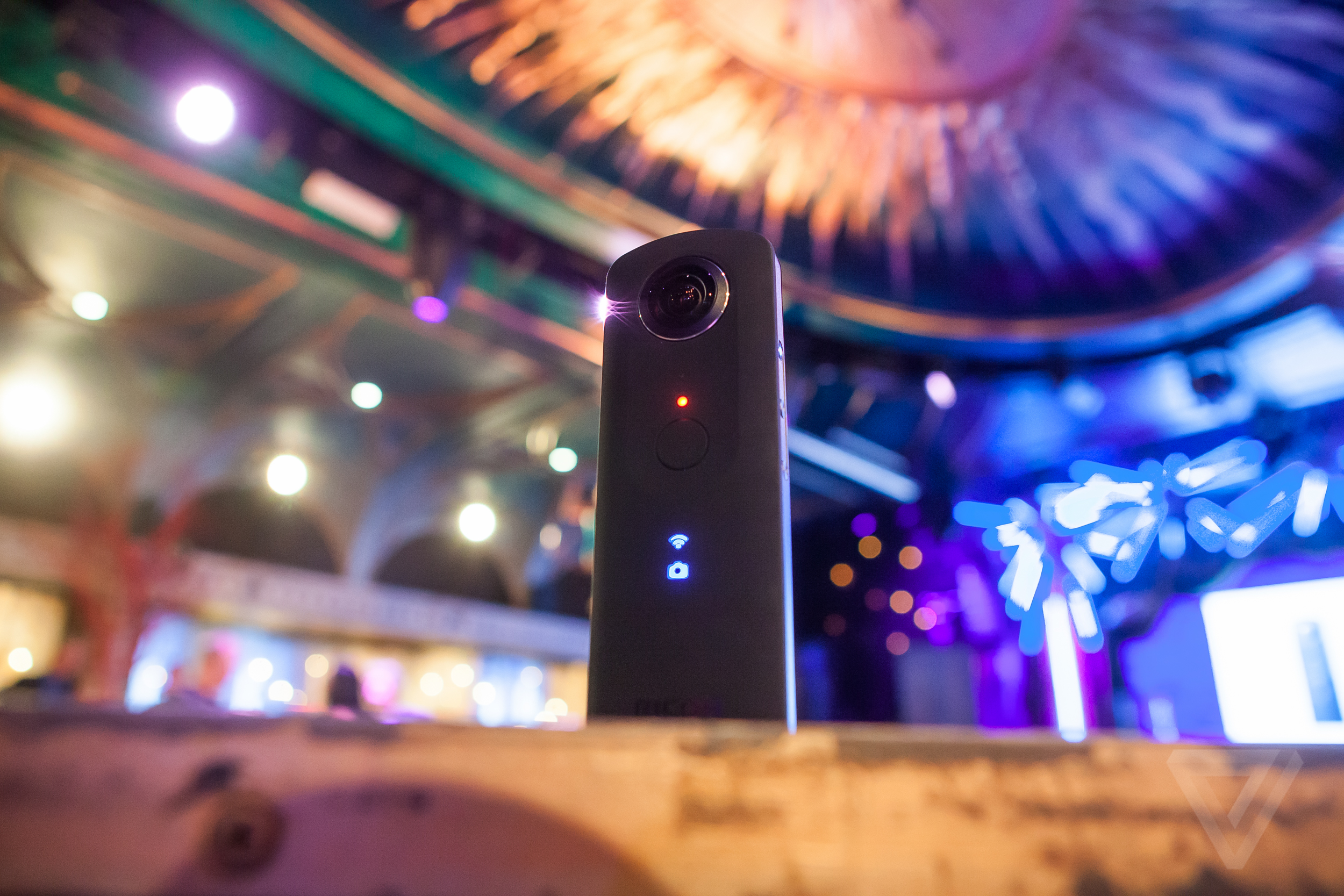 Two years ago, Ricoh found a way to produce full, spherical photos and videos without needing a 16-camera array or a ball with a bunch of lenses on it. It was a small, Apple TV remote-sized camera called the Theta. The problem was the quality was awful. Too much had been sacrificed for the sake of portability and ease of use.

The Theta S is a much more competent version of its predecessor. It's capable of higher resolutions, has more internal storage (8GB as opposed to 4GB), and it comes in a more professionally polished design.

Each of the two 12-megapixel cameras on the Theta S has a 190-degree field of view, so the images being recorded actually overlap. This helps the software stitch the images together more smoothly and also removes the camera from the finished photo or video, which means you can always be in the shot.

The Theta S images look great, even the ones in low light

And those finished products look great, by the way. Ricoh couldn't have picked a more challenging venue to show off its new product; we were in Manhattan's Diamond Horseshoe Theater, a below-street-level dinner theater joint with a burlesque show vibe (hence, the aerial acrobatics). But the 360-degree photos were still relatively free of image noise and full of detail, likely thanks in part to the f2.0 lens on each side, which produces even greater quality photos and videos in broad daylight.

The photos and videos you shoot with the Theta S can be downloaded to your phone with just one tap in the Theta app. The app also gives you an interactive live view of what the camera is seeing, so you can get a really good sense of what your 360-degree scene will look like in the end. It's a small but important feature, because very few people are familiar with the idea with how, why, or even when to shoot 360-degree images.

When you're done shooting, you can post your spherical images to Ricoh's dedicated website for the Theta and share them on various social media, try to get them published on Google Maps as "Photo Spheres," or — if you shot video — upload right to YouTube, which has allowed interactive spherical video playback since March. (That last one is a big deal, because finding the right home for spherical content has been one of the biggest limitations of 360-degree cameras so far.)

Of course, there are a handful of caveats, including the $349 price tag. The Theta S has its limits when it comes to video, which looks good but is not quite as impressive as the pictures the camera creates. And as for live streaming, Malcolm admitted that it will take a while for a full-featured mode to come to the Theta S. (Right now it only works if the camera is plugged in with an HDMI cable.)

The unveiling event itself even had to be structured around the limitations of the device. It started with a Theta S dangling from the ceiling above a Cyr wheel performance, but neither Malcolm nor his team were able to access that footage wirelessly. Instead, they had to manually retrieve the camera, bring it backstage, and by the end of the hour-long presentation the video was finally shown to the audience.

The Ricoh Theta S will be available in the US, Asia, and Europe in October for $349.