Read next: The iPad Pro review.

After months of rumors and speculation, the iPad Pro is here. Apple has unveiled its latest addition to the iPad tablet lineup during a special press event in San Francisco this morning. Like the rumors suggested, the iPad Pro is a larger version of the traditional iPad. Apple CEO Tim Cook says it's the "biggest news in iPad since the iPad.”

The new iPad Pro uses a 12.9-inch display (2732 x 2048 resolution with 264 ppi), and makes use of the new split screen app features of iOS 9. The width of the iPad Pro is the same as the height of the iPad Air 2. "It can do things that a smartphone doesn’t do because it doesn’t have to sit in your pocket," says Apple's Phil Schiller. Apple is using the same technology from its iMac with Retina 5K display to bring the iPad Pro pixels to life. "For the first time in an Apple display, it has a variable refresh rate," explains Schiller. This means Apple can slow the display down and save battery.

Inside it's using Apple's new A9X processor, which Apple claims is 1.8 times faster than the previous chip it replaces. "Our chip team is just on fire," says Schiller. Graphics on the iPad Pro have doubled in terms of performance, so it's clearly going to be a fast device for games and productivity apps. "It is faster than 80 percent of the portable PCs that shipped in the last 12 months," claims Schiller. "In graphics tasks it's faster than 90 percent of them." 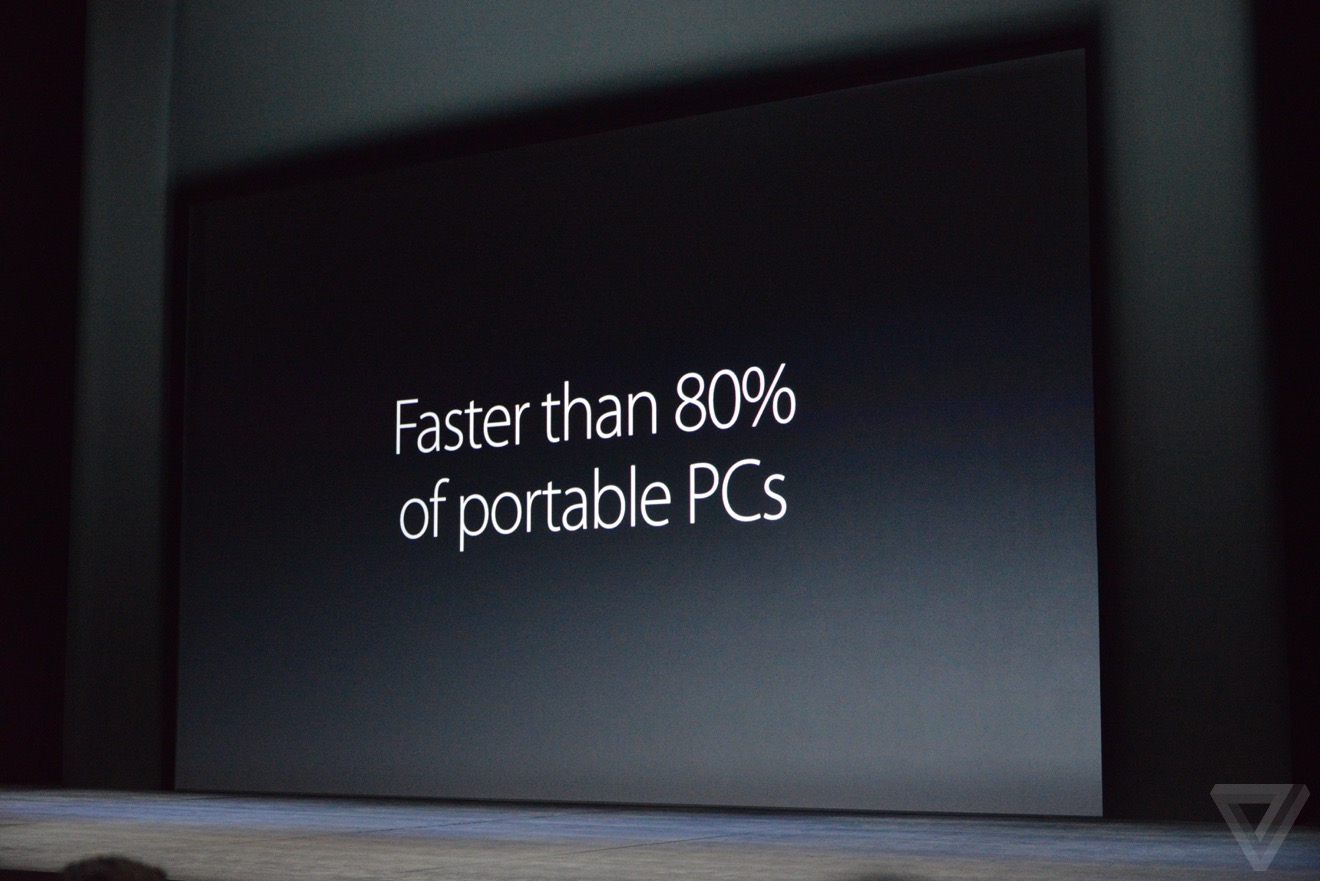 To highlight its performance credentials, Apple says the iPad Pro will last 10 hours on battery with the ability to edit three streams of 4K video simultaneously. Apple has even added a four-speaker audio system to the iPad Pro, and iOS 9 will balance the sound dependent on how you're holding the device.

The iPad Pro is just 6.9mm thin and 1.57 pounds, so it's very thin and lightweight considering the large 12.9-inch display.

A new iPad, a new keyboard

Crucially, Apple is introducing a Smart Keyboard for the iPad Pro. "This is unlike any keyboard you've ever used before," says Schiller, conveniently forgetting Microsoft's Surface keyboard. It's covered in a fabric that forms the structure for the keyboard. Three new circles along the side of the device act as a new Smart Connector to attach the keyboard to the iPad Pro, in a similar style to the Surface keyboard. 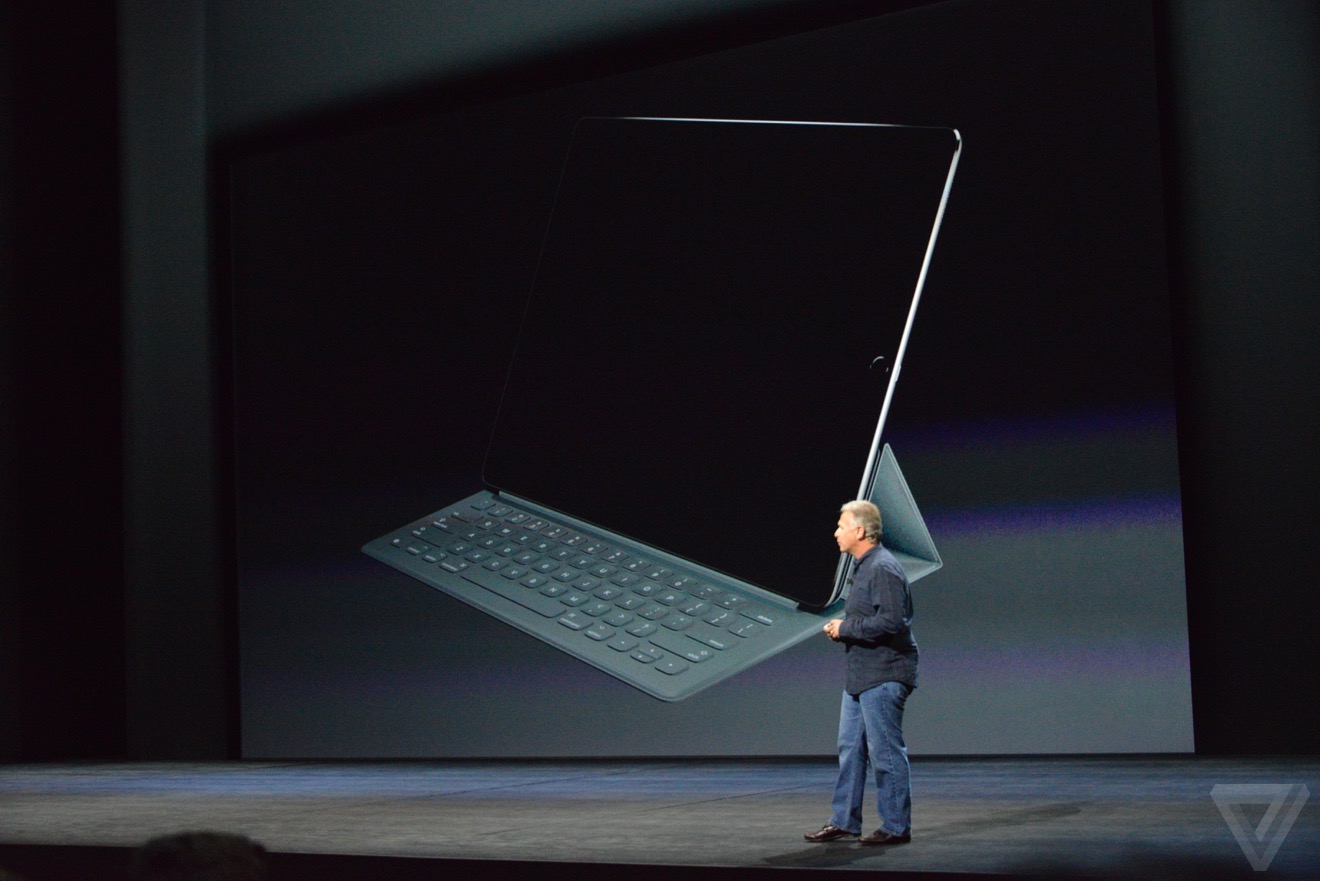 A new keyboard isn't the only hardware addition to the iPad Pro. Apple also has an Apple Pencil (yes, really) that works as a stylus for the tablet. When you're using the Pencil, the iPad Pro increases the amount of scanning on the surface of the display to improve accuracy. The Apple Pencil has sensitivity sensors so you can press lightly for brief strokes or harder for wider strokes. Apple claims it feels like a true writing or drawing instrument.

Apple Pencil can be recharged using a Lightning connector that plugs directly into the iPad Pro, and a 15-second charge will last for 30 minutes. Apps like the built-in Mail and Notes apps all support Apple Pencil, allowing you to ink in notes or email messages. Apple even invited Microsoft on stage to demonstrate new versions of its Office for iOS apps that include support for the new Apple Pencil. PowerPoint has great support for the Apple Pencil, allowing you to convert ink into objects in slidedecks. 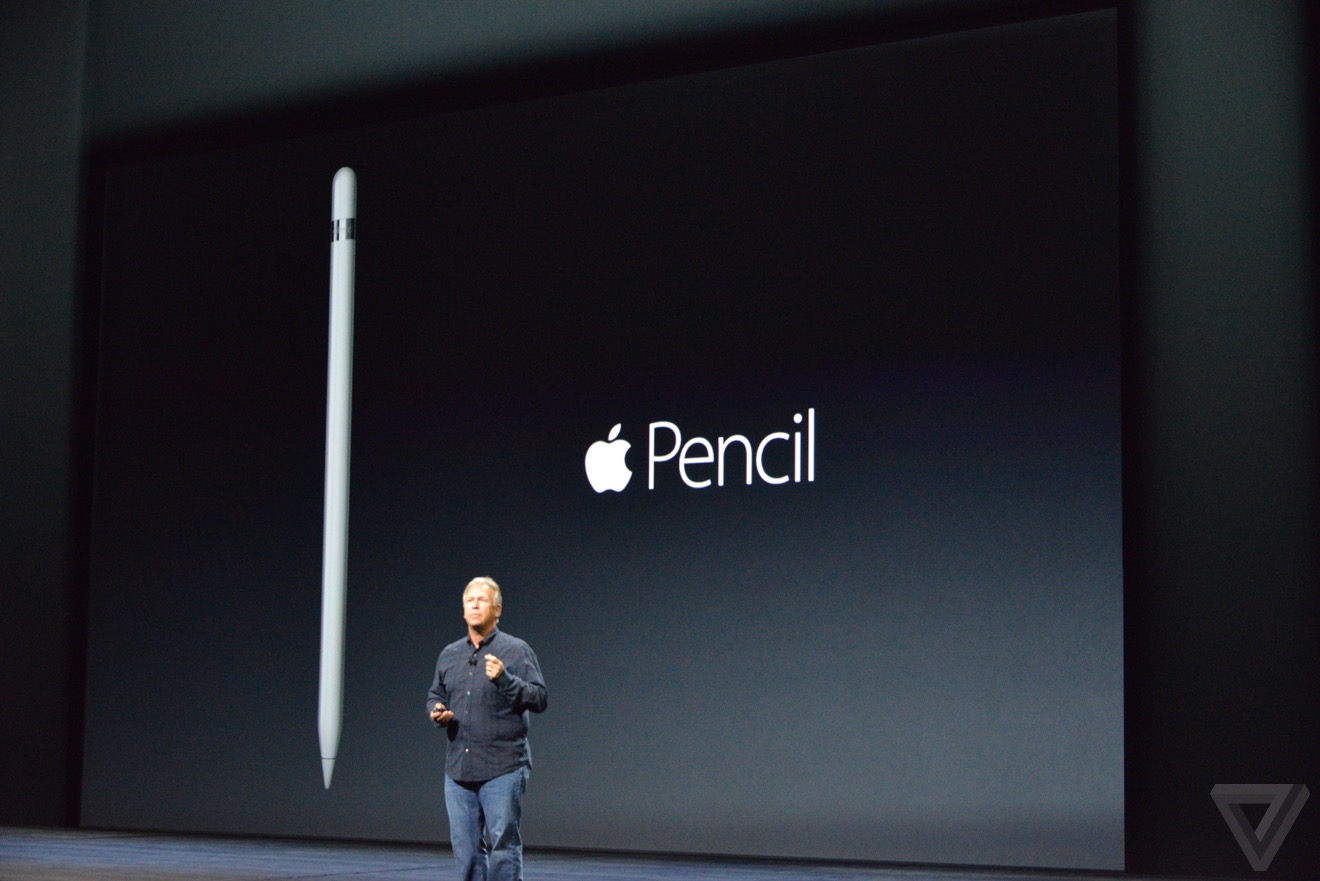 Microsoft wasn't the only surprise addition to Apple's iPad Pro announcement. Adobe joined the stage to demonstrate several apps running on the iPad Pro. Adobe Photoshop Fix is a new app for iOS that allows you to retouch images quickly. Adobe has built facial detection into the app, allowing you to retouch faces with ease. Adobe Sketch has also been tuned to work with the Apple Pencil, with support for the pressure sensitivity and multitasking between other iOS 9 apps.

Aside from apps and power, the new iPad Pro also includes a Touch ID sensor and support for LTE. Apple has placed an 8-megapixel iSight camera on the rear, and a FaceTime HD Camera at the front. Apple is planning to release the iPad Pro in November in silver, gold, and space grey finishes. A 32GB model starts at $799, while a 128GB version is priced at $949. If you want to opt for LTE then the only choice is the 128GB model that comes in at $1,079. Apple isn't bundling the Apple Pencil or Smart Keyboard with the iPad Pro, though. You'll need to pay $99 for the Pencil alone, and $169 for the keyboard.

See all of the Apple news right here!

Apple Event: Apple Pencil
Most Popular
From our sponsor
Advertiser Content From