It seems as though Samsung's next fitness device will be worn in two places: your wrist, as is usually the case, but also on your shirt. Leaked images of a product — known only as SM-R150 right now — reveal a fitness watch that looks very similar to the Samsung Gear S2 smartwatch. There are differences here and there that make it clear this is something different, though; the bezels don't match, nor does it look like the strap in these images is detachable.

But the more interesting part is definitely that little circular module seen attached to the person's shirt. What kind of data is it gleaning? Is it a heart rate monitor? Wrist-based heart rate tracking has steadily improved over time, but accuracy still falls short of the chest heart rate straps preferred by serious runners. It's possible that Samsung is finally ready to acknowledge that another piece is necessary for better results — but why wouldn't it be worn underneath the shirt if it's a heart rate sensor? It also seems a little too high and off to the side to be doing that. 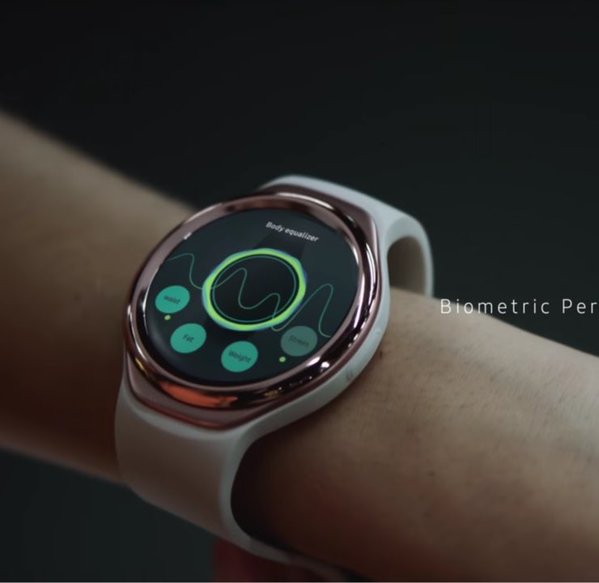 There are plenty of other tasks this tiny thing could also perform, so we'll need to wait for Samsung's official announcement (at Mobile World Congress, most likely) to get the full story. That's also the venue where we expect to see the unveiling of three new phones: the Galaxy S7, S7 Edge, and S7 Edge+. Similarly, Apple has also floated the idea that it could eventually produce a secondary wearable "adjacent" to Apple Watch, perhaps with more advanced vital tracking for consumers who prefer deeper stats compared to the smartwatch's functions, which are targeted at a much wider audience.