As the resident drone guy at The Verge, I got a lot of questions around Christmas from people who wanted to buy a drone for their friends or family. I enjoy chatting about drones, so this would normally be a fun experience. But a lot of people wanted me to suggest a “great” drone, with a nice camera, for less than $500. And while there are a lot of units out there which fit that price constraint, there are very few I would qualify as great, especially if you want them to capture aerial photos and video that you can actually enjoy.

The closest thing to an answer at this price point was the new Parrot Bebop 2, which you can get for $550. It delivers more than 20 minutes of flight time on a single charge, boasts a 14-megapixel camera that can capture 1080p video, and is rated for a maximum range of 300 meters. At that price point it doesn’t have a 4K video camera, HD live stream, or two-stick remote control. But none of those things are necessary for someone who is just getting started.

The Bebop is almost the perfect starter drone: lightweight, low cost, and a good enough camera. Unfortunately, in my testing, the Bebop 2 suffers from the same critical flaw as its predecessor: a very unreliable Wi-Fi connection that frequently drops, leaving your drone stranded in mid-air. That makes it really hard to recommend, even for a novice drone pilot. 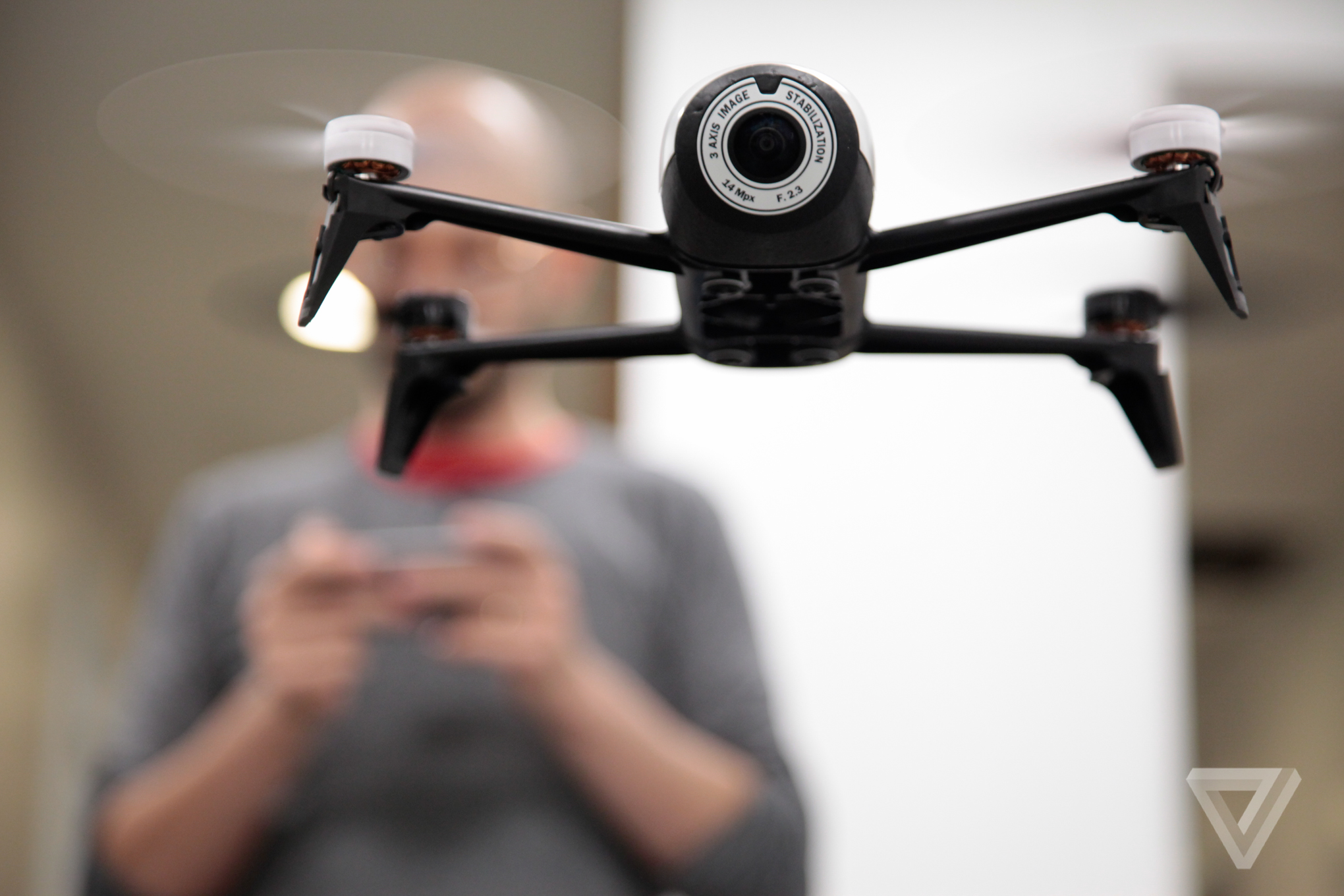 The battery is vastly better
Let’s start with the things I like about the Bebop 2. It has double the battery life of the original Bebop, and the battery now locks into place, instead of being poorly secured with a velcro strap.

The body seems otherwise virtually identical to its predecessor, although the rotors have now been color coded to make it a little easier to remember where each one goes. On its own, without the optional remote control and Wi-Fi range extender, the Bebop is wonderfully compact and light. Despite its small stature, I found it did a good job of holding its position in strong winds.

The original Bebop often disconnected from my phone when it was just a few feet away. And instead of hovering in place after a disconnection, it sometimes continued flying, leading to a dangerous crash. I never had either of these issues with the Bebop 2. 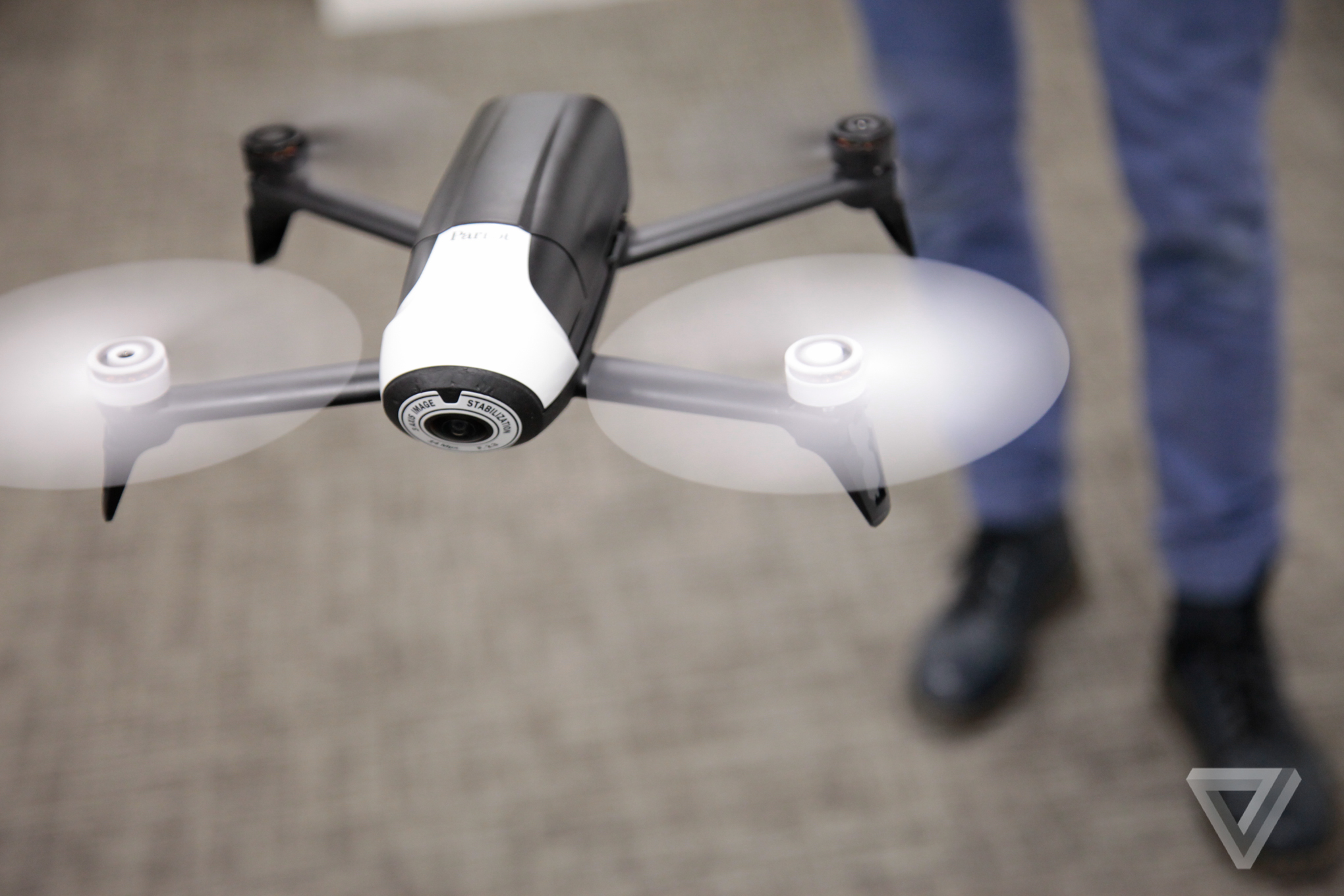 For capturing images and video, the Bebop 2 takes a different approach than most drones: it uses a fisheye lens attached to the nose instead of an external camera mounted on a gimbal. Instead of using a remote to manually pan and tilt a camera, you can shift your focus within the wide field of view generated by the fisheye, a trick accomplished through software.

The new Bebop has done a nice job improving the quality of video when you are panned straight down to the ground, a viewpoint that is unique to aerial filming and can produce some magical results over interesting terrain.

There is still no removable storage
Unfortunately, the camera itself hasn’t been upgraded much. When you compare the blurry, compressed footage to what we shot at identical locations with cameras from DJI and Yuneec, the Bebop is clearly far inferior.

And there is still no option for removable storage, just 8GB of internal memory, which fills up pretty quickly when you’re shooting 1080p. That means you need to stop and transfer footage to your phone or computer or pull footage directly from the drone to your phone or tablet using a Wi-Fi connection. Neither process is fast or convenient, and the wireless transfer option means you’re burning battery on both devices instead of flying.

Video comparison between the Bebop 2, DJI Phantom 3, and Yuneec Typhoon 500. All footage was recorded at the drone camera's highest quality with ISO and white balance setting on automatic.

I flew the Bebop 2 in three different locations: a park in New York City; a beach in Hammonasset, Connecticut; and a golf course in Fairfield, Connecticut. I made sure to test it on all the available Wi-Fi bands: 2.4Ghz, 5Ghz, and a combination of the two. I have flown drones from DJI, Yuneec, 3D Robotics, and Blade at these same spots in the past without any troubles.

In every instance it was easy to connect, takeoff, and fly with the Bebop 2. But once it passed about 100 meters, the video feed began to get choppy, freezing up and pixelating. At 150 meters or more I frequently lost connection. If I walked to within 50 meters of the drone, I could sometimes reconnect. Most of the time it hovered in place for 60 seconds before rising to 30 meters and returning to the home point where it launched.

Disconnections were a constant

After a number of failures I decided to go all in and test a potential worst-case scenario. I flew the drone out over the East River, figuring that if it fell into the drink, that would make a great conclusion to my review. It got to 250 meters, the farthest I flew using just the phone as my remote. But when it disconnected, for whatever reason, it didn’t return home after 60 seconds. I watched helplessly as the drone hovered in place, battery dwindling. In desperation I hopped a fence, shimmied along a pier, and by getting a few dozen feet closer, managed to recover the Wi-Fi network, reboot the app, and hit the return home button, landing with just 9 percent of my battery to spare.

I did manage to get more range out of the Bebop 2 when using the optional $399 "SkyController," which is Parrot’s delightful name for its traditional two-stick remote control. That unit has a Wi-Fi range extender on top, which let me fly the Bebop 2 out to roughly 550 meters with full control and only small hiccups in my video feed. But past that range I experienced two disconnects, and with the amount of terrain in between, couldn’t move close enough to recover the signal before the drone returned home. And adding the SkyController makes the Bebop 2 as expensive and bulky as a DJI Phantom or Yuneec Typhoon.

Limited range is ok; Unreliable connectivity is not
Here’s the thing: 300 meters is actually plenty for a beginner drone that costs under $600. If Parrot promised and delivered on that range reliably, I would view it as an attribute on a cheap drone that is trying to straddle the gap between a tool and a toy, a sensible trade-off between safety and capability. There is a sweet spot in the market right now for a unit that is small, lightweight, and low cost, as the barrage of gift requests I got this holiday season showed. I would even be okay with a drone that sensed when it was losing connection and warned me or stopped moving to keep itself in range. But when Parrot promises you can get to 300 meters and sells a drone that routinely disconnects at 150 meters, (or 600 meters instead of 2 kilometers with the SkyController) I’m loath to recommend the unit to anyone.

$324.16 at Amazon$349.00 at Walmart
Most Popular
From our sponsor
Advertiser Content From