Ready or not, smartwatches are coming for the mainstream

Ready or not, smartwatches are coming for the mainstream

The sneak attack is how smartwatches will succeed

Last year was a big year for smartwatches: Apple launched its long-awaited Apple Watch, Samsung introduced its first watch with a round display, Pebble added three new models to its lineup, and a whole bunch of companies launched watches running on Google’s Android Wear platform. That’s not to mention the litany of wearable devices that gained "smart" features without running a full-fledged smartwatch platform.

This buzz of activity hasn’t brought smartwatches up to the level of smartphones in terms of sales or popularity, but it has moved them to the forefront of technology conversation. Even if people aren’t buying them, they’re talking about them and writing about them and asking questions about them. Ready or not, smartwatches are coming for the mainstream.

This isn’t more evident than in the watches Fossil announced just a couple of months ago. The traditional watch company, which has its products in virtually every mall across America, introduced a line of connected wearable bracelets and watches along with plans to release one hundred connected wearables over the next year.

The majority of those devices will be similar to the Q Dreamer fitness bracelets we recently reviewed. They’re simple devices that look like decorative bracelets and bangles, but have very basic fitness tracking and notification features. Watches like the Q Grant and just-announced Q54 Pilot take a similar approach: they are traditional Fossil analog designs with basic activity tracking and notification mirroring and pair with smartphone apps for iOS and Android, but lack the displays of more powerful smartwatches. These are continuations of the idea set forth by the Withings Activité, which is best described as a slightly smarter analog watch.

But Fossil is also dipping its toes into more advanced smartwatch waters with the Q Founder. The Founder is an Android Wear smartwatch complete with a full touchscreen, voice controls, and all of the other accoutrements that Android Wear watches from Motorola, LG, Huawei, and others offer. It retains many of the design traits common to Fossil’s analog watches: it’s big and chunky and well, kind of bland. It doesn’t scream "I’M A COMPUTER" on your wrist; it just looks like any other watch Fossil might make. That’s largely the point: if smartwatches are going to eventually replace traditional watches for many people, they need to look and feel familiar to what people are used to. 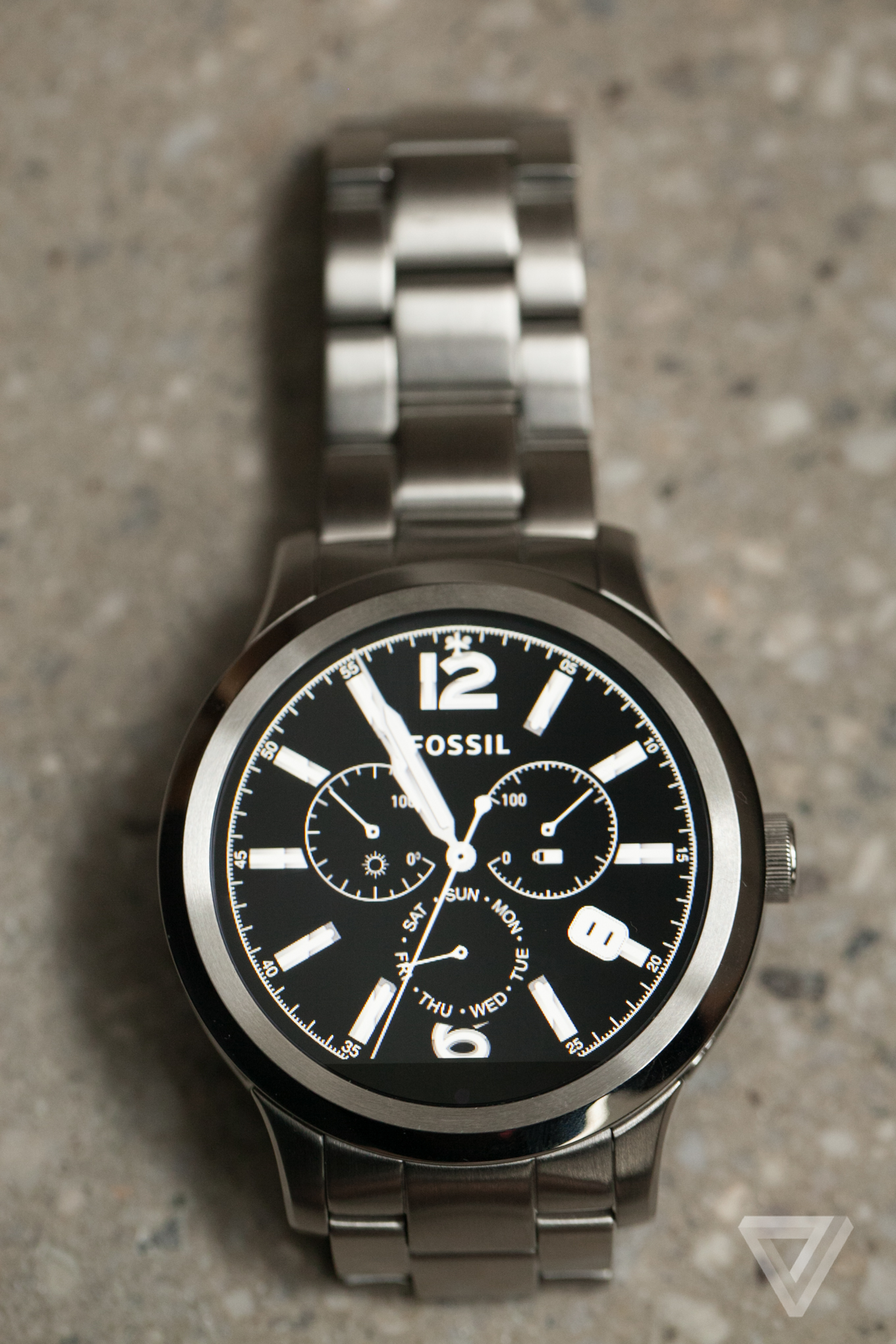 As for its smartwatch capabilities, the Q Founder is far from the best you can get. The stainless steel model with steel link bracelet is $295 is priced lower than options from Apple, Huawei, or Motorola. But it’s big and clunky in comparison, and its large size and hefty weight make it uncomfortable on my wrist. The screen is low-resolution and not particularly bright, and like the Moto 360, it has a flat spot at the bottom that prevents it from being a fully circular display. The Q Founder also lacks a heart-rate monitor, giving it fewer capabilities on the activity tracking front.

Those quibbles aside, the Q Founder does everything else any other Android Wear watch can do. It shows me notifications from my phone, lets me use voice actions to reply to messages or perform Google searches, and typically lasted a day between charges. (I’m particularly fond of the charging cradle that comes with the watch: it’s like I’m resting it down on a pillow at the end of the day.) The Founder has access to all of the watchfaces available in the Play Store for Android Wear watches, and it comes with a few customizable ones designed by Fossil to mimic its analog watches. It is, by all accounts and measures, a complete smartwatch, at least according to the 2016 definition. It just happens to be a full-fledged smartwatch that's virtually indistinguishable from the rest of Fossil's lineup.

The next time you go shopping for a watch, you might be looking at a smartwatch without even knowing it

My colleague Walt Mossberg recently pointed out how far smartwatches have to go to really be compelling devices and he’s right. The sales pitch for a smartphone is a lot more straightforward than for a smartwatch and there isn’t really a compelling reason for most people have one in their lives. But that isn’t going to stop the smartwatch production train from charging along, and things like Fossil’s watches from filling up department store shelves.

Getting a smartwatch onto the wrists of average watch shoppers browsing the cases in Macy’s may be tough for Motorola, LG, or Samsung, which aren’t even on display outside of electronics stores. But Fossil and other mainstream watch makers are already there under the glass, ready to slip a connected watch under your nose and onto your wrist. If you’re not paying attention, the next time you go shopping for a watch, you might be looking at a smartwatch without even knowing it.