Uber doxxed one of its drivers

Uber doxxed one of its drivers

Social security and tax ID numbers viewable to other drivers

The personal information of a Florida woman who drives for Uber, including her social security and tax identification numbers, were mistakenly sent to an unspecified number of other drivers as the result of a software glitch, the ride-hail company told The Verge Monday.

The woman's 1099 began popping up on Facebook, Twitter, Reddit, and other forums late Sunday. Apparently several drivers logged on to the "Partners" website to download their 1099s, but instead received the Florida driver's 1099, which contained her social security number, address, earnings, and tax ID number. Gizmodo found 16 examples of drivers receiving the information improperly. This raised concerns of identity theft among drivers, but so far Uber insists only the Florida driver's information was mistakenly distributed. (A Facebook message sent to the driver was not returned.)

Hey @Uber_NE @Uber I have someone else's 1099-k on my dashboard, includes name, address & SSN. This is not a good thing, is my info safe?

@Uber_Support Some other persons 1099 was loaded to my account dashboard.#databreaches

"Has anyone else received someone else's 1099-K?" one driver posted on a popular forum. "I noticed my tax forms were available on the partners site. I pulled up what was suppose [sic] to be my info and boom, someone else's info came up." A spokesperson for Uber blamed the incident on "a bug," and said the driver's information was only viewable for a short period of time. She stressed that no one else's information was distributed in a similar manner. But drivers were understandably concerned about the breach.

This wasn't the first time personal data got loose. In May 2014, the names and license numbers of thousands of drivers were stolen, a theft Uber blamed on its main US rival, Lyft. The Department of Justice has reportedly opened an investigation into the incident. And last October, the tax information of thousands of drivers was released through the Partners portal, allowing anyone with access to the website the ability to view this sensitive information. Uber says it will be providing a more detailed statement about the issue shortly.

UPDATED January 25th, 2:52PM ET: The Uber spokesperson said the tab in the Partners portal that allowed drivers to download their tax information will be disabled until the bug can be fixed, but promised that tab would be reactivated before February 1st. Meanwhile, Uber will assist the Florida driver with credit monitoring until the problem is resolved.

"We take partner privacy very seriously and make every effort to ensure the security of personal information," she said. "Due to a bug in our system, one partner's 1099 information was viewable by other drivers for a short period of time. The bug has been fixed and we're deeply sorry. We are in contact with the driver whose information was affected." 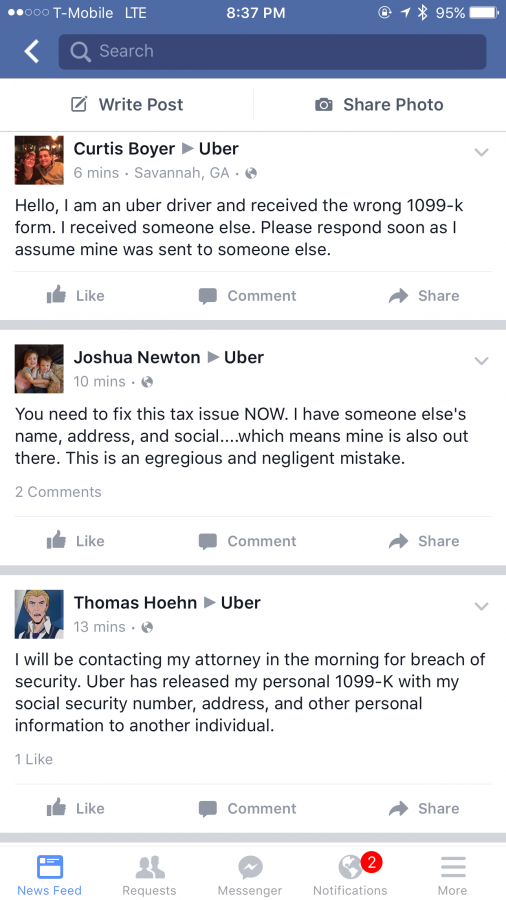 Re/code Decode: Lyft's president on the transition from ridesharing to autonomous cars