Jonathan Blow’s idea just wouldn’t stop growing. After the release of Braid, Blow’s breakout hit and one of the defining titles of the current generation of indie games, he toyed around with a few ideas, before coming across one he wanted to explore further. It was a game that would have players exploring a deserted island, sort of like Myst, while solving a series of puzzles that all revolved around tracing a line through a maze. That was the game he announced in 2009, and the one that’s been playable at conventions and trade shows since 2010. But it’s not until today that The Witness is finally being released. What was originally envisioned as a game that would take 18 months to build and five hours for players to experience has ballooned into a multi-year project that takes dozens of hours to complete.

“It wasn’t the mission statement to make a 100-hour game, and I was very surprised at that number,” says Blow. “The goal wasn’t to make a big game. The goal was to explore the ideas, and that’s how many ideas there were.” 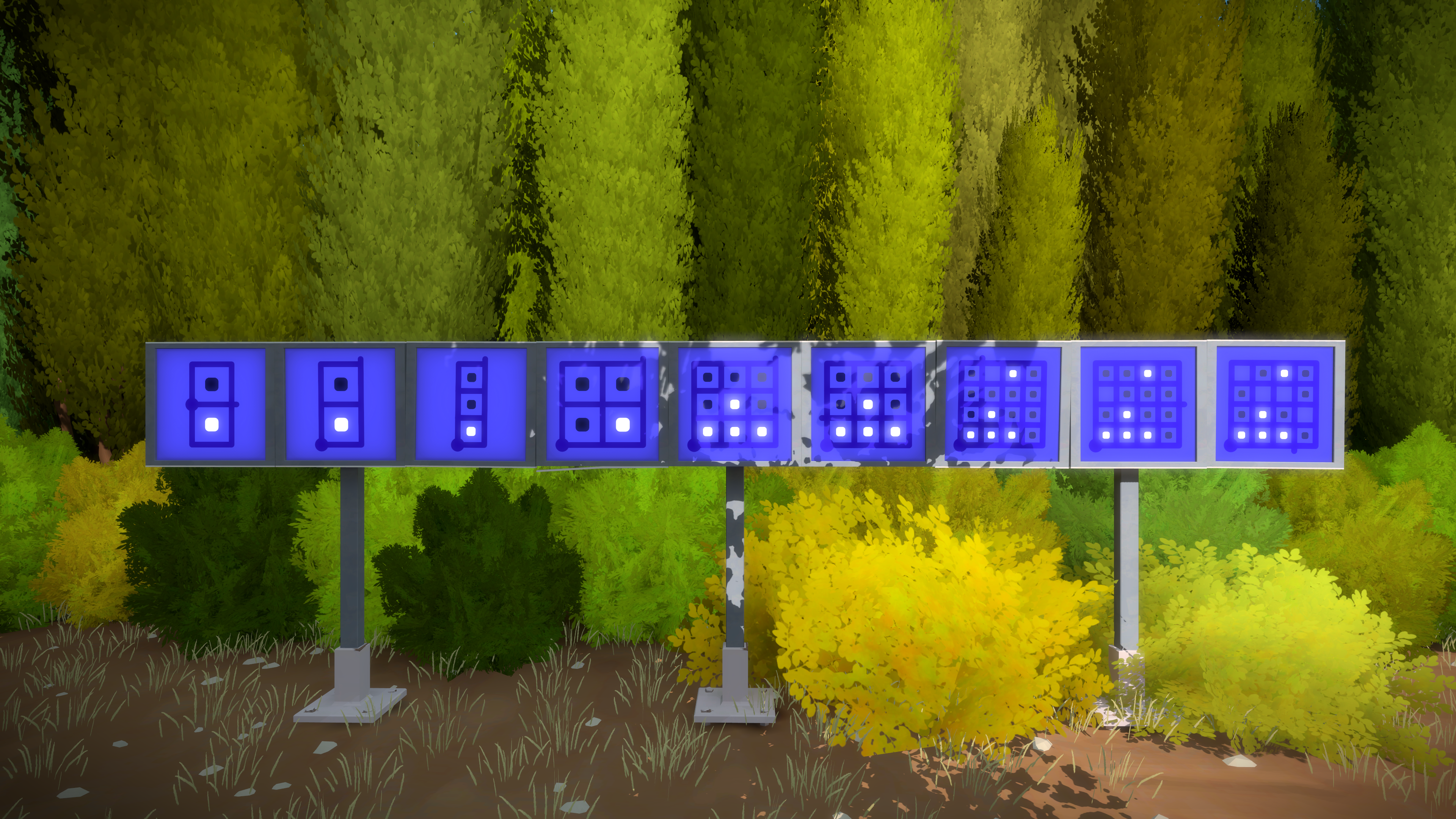 Compared to The Witness, Braid was a relatively modest game. Released in 2008 on Xbox 360, and later ported to PC and PS3, Braid was a side-scrolling platforming game in the mold of Super Mario. But unlike Nintendo’s iconic series, Braid wasn’t just about jumping on ledges and stomping bad guys; it took the basic structure of a platform game that so many people are familiar with, and twisted it into an experience about solving complex puzzles and exploring philosophical questions. It went on to become a massive hit.

Blow designed Braid by himself, with artist David Hellman creating the iconic watercolor-style look for the game. In contrast, The Witness is a big, 3D, open-world game that was made by a much bigger team, the size of which has fluctuated over the course of development. When I visited the studio, dubbed Thekla, Inc., in San Francisco last week, the tiny office was filled with eight people, including a trio of testers scouring the game for last-minute bugs (and one small dog who was wary of strangers). Blow used the majority of the money earned from Braid to fund the venture, coupled with a loan from a friend, resulting in a game that cost around $5 million to make. Of course, much like the scope of the game, the plans for the size of the team and budget weren’t always so ambitious.

"One of the things I like about Jon is that he knows where he’s going, and he knows what’s important."

"At first I wasn’t even sure if anyone else was going to work on it," says Blow. "Because Braid was a successful game, but it was unclear how much money there was going to be at the end; [it was] enough for me to live off, but was it going to be enough to do anything bigger with? So I was originally envisioning [The Witness] as a game that I was mostly making, but maybe I would find a contractor to help do the art the same way I did with Braid. And then of course once I had more money, and once the game was working, I was like ‘Okay, we can actually make this a team thing, and make it more real in terms of being a 3D game.’

"Then once we were doing that for a while, I kept seeing things we could make better. We didn’t have to stop and ship the game, because we had funding, so it was just 'let’s take this opportunity and make this a really good game,' as opposed to just keeping to the original vision."

The team is made up primarily of industry veterans who were excited at the chance to leave the confines of a big studio to work on something smaller and more personal. Programmer Andy Smith, for instance, has worked at multiple studios over his 17-year-long career, contributing to big-name franchises like the SOCOM shooter series. Artist Luis Antonio has worked at Ubisoft and Rockstar, contributing to nine different games before The Witness. The one exception is artist Orsolya Spanyol, who started working on the game straight out of school. "I never thought that I would get a job like this," she says. "I thought that I would go work at a big studio and spend my time modeling little things."

The team says that they are given a lot of autonomy when it comes to working on the game — Spanyol jokes that she had "almost too much creative freedom" at the beginning — but despite the fact that The Witness is a collaborative effort, it’s clear that Blow’s vision is guiding the process. "One of the things I like about Jon is that he knows where he’s going, and he knows what’s important," explains Salvador Bel, a programmer on the game who previously worked at big studios like Killzone developer Guerilla Games. "So for us that makes it really easy to focus." 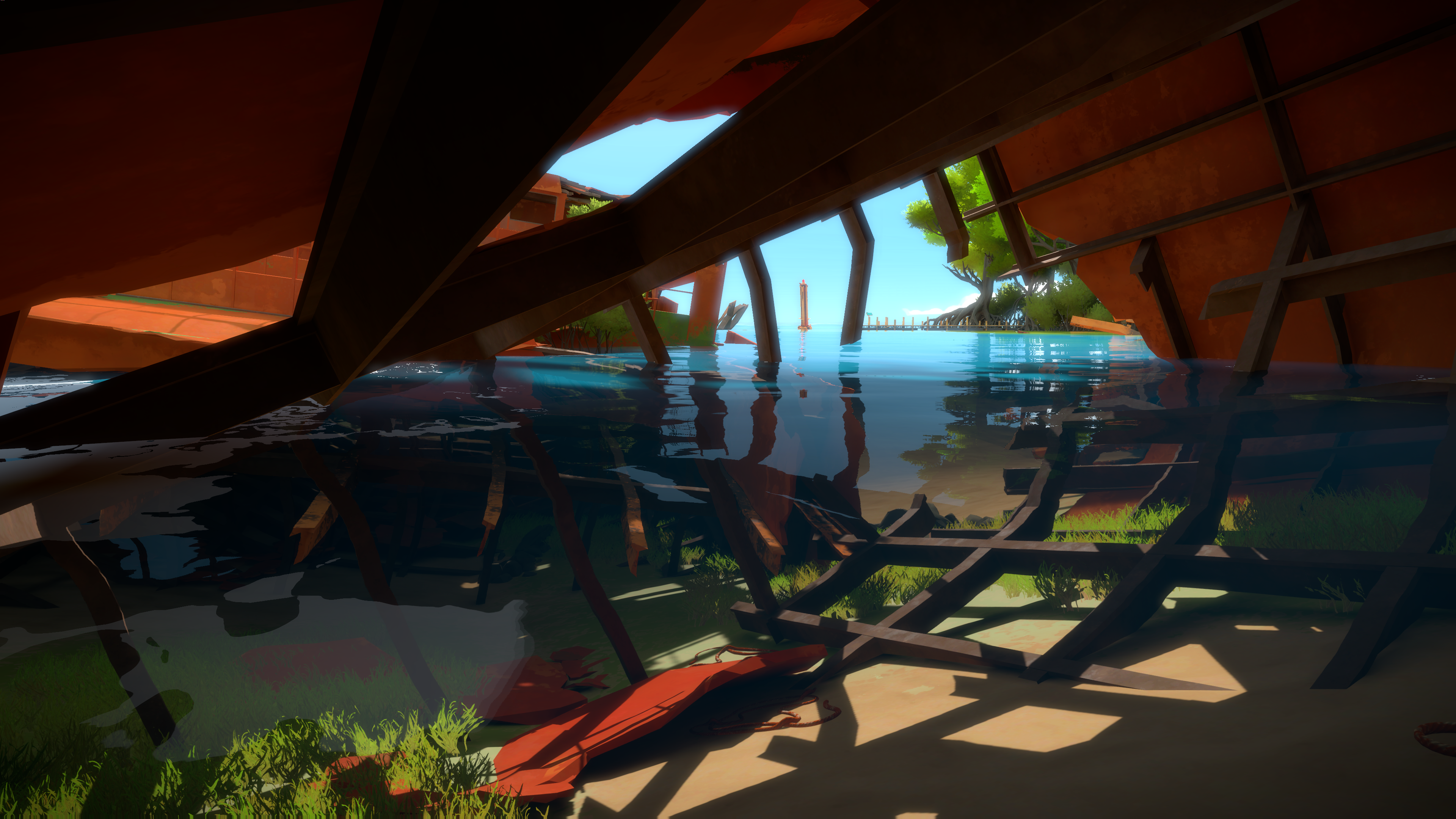 One of the reasons The Witness has remained so mysterious is that the team is extremely wary of spoiling the experience. The Witness is a game about solving puzzles, but it’s also a game about observation. You need to pay close attention to your surroundings to find out the solutions — the game gives no text instructions at all — and much of the joy and challenge comes from those "a-ha!" moments when you realize the answer to a problem that’s been stumping you. The team is very conscious that those moments can be easily ruined, and they’ve tried hard to avoid that. When I wandered around the office, even the testers would make sure I had already seen whatever puzzle they were working through before they proceeded.

This, in turn, has made it a difficult game to discuss in the press. When you can’t explain the details that make your game special, it’s hard to get across why it’s interesting. Last week Blow revealed that the The Witness would cost $40. Many gamers were shocked at the price, wondering why a simple puzzle game cost so much money. From what I’ve played, The Witness is an experience that’s much larger and more intricate than its initial sliding maze puzzles suggest, but Blow wants you to learn that for yourself.

"When I go to talk about the game, already it’s a hard game to talk about," he says. "I have to somehow convince people that drawing a line in a maze is fun for 100 hours. So that’s hard. But I also have to do it without telling people most of the things that are fun, because I want them to experience that, and that surprise is what makes the game fun to play."

"Then I knew I wasn’t just totally deluded."

One of the most astonishing things about the game is the attention to detail. The Witness takes place on a relatively small island — after a few hours I was able to get around pretty easily despite my poor sense of direction and the lack of an in-game map — but it’s an incredibly dense place. Nearly everywhere you turn you find something new, and much of it feels important, even if you don’t understand why immediately. From the shape of a building to the placement of a tree, everything in the game feels deliberate, like someone put a lot of thought into how to stack those rocks. The developer even enlisted the help of real-world architects, who worked with the artists to ensure that the architecture and landscaping were grounded in reality.

"If you’re asking someone to pay attention to details, clues in the environment, then you as a designer have to go and make sure that what they see is going to be a high-quality experience," Blow says of the focus on details like architecture. "If some part of the game doesn’t support being looked at closely, you’re setting yourself up to be bad." Spanyol adds that "it makes it feel very grounded. It feels more immersive just because the details are in place, and your brain kind of picks up on it."

Those details are one of the aspects of the game that has benefited from the prolonged development time. In 2010, Blow secretly showed the game at the Penny Arcade Expo in Seattle; a playable version was available for people to check out, but with no signs or information to explain what the game was or who made it. It was a much uglier version of the game, with placeholder art and buildings that looked like boxes, but players seemed to pick up on it anyways. Some spent upwards of two hours playing this version of the game in the middle of a crowded convention floor, according to Blow. "That was the first time I saw other people who were not my friends play it," he says. "So then I knew I wasn’t just totally deluded."

The early version of the island was remarkably similar to the one in the final version of the game. The basic idea and layout are the same, but in the intervening years it’s been filled with more stuff. A trio of artists turned what Blow describes as "ugly programmer art" into an idyllic place, a location that feels like a cross between the island from Myst and a peaceful getaway. "It’s a place where you enjoy being there and spending large amounts of time just looking around, but [it's] also a little bit empty," Spanyol says. "You can feel that something is missing."

Meanwhile, Blow continued to create puzzles, building off of the core idea and taking them in new directions. The basic mechanic of every puzzle is the same — you’re confronted with a maze, and you need to draw a line through it — but the different ways you go about this are remarkably varied. Some of the puzzles are extremely challenging, others less so, but they all seem to build off of one another. The puzzles you’ll be solving toward the end of the game would make no sense when you’re just starting out, with rules that expand and become more nuanced the more you play. The game is able to teach you these complex rules without verbally explaining a thing; you learn by doing, without any explicit instructions. The result is hundreds of puzzles that all revolve around the same mechanic, yet manage to stay interesting over the course of dozens of hours.

That may sound like a lot, but if it weren’t for Blow’s stringent standards, the game could’ve been even bigger. "I cut a lot of puzzles from the game, because they were alright, but they didn’t live up to the same level as the other ones," he says. "Every puzzle has to pull its weight. If it was like 10 percent interesting, then the game feels flawed. And it’s like why is that there. I’m very sensitive to that."

Much like other artists, many game developers struggle with the process of following up a big hit. The shadow of past success can make creating something new a challenge. But that doesn’t seem to be a problem for Blow. "I don’t care about any of that," he says of the expectations that come from having created a game like Braid. Instead, he’s devoted years and millions of dollars in the pursuit of a single idea, and the hope that it will turn into a great video game.

"I make the game that I think is the best game, and then I try to figure out how to communicate to people that it’s a good game," he says. "If I was trying to make a game that people would think was good, it wouldn’t have been about drawing lines in a maze."

The Witness is available today on PC and PS4. An iOS version is also in development.

Read next: The Witness review