I can’t stop thinking about puzzles. For the past week, they’ve occupied a huge chunk of my brain, popping up in the most unlikely places. I see them when I’m doing mundane tasks, like folding laundry or giving my kids a bath, or when my mind wanders during a meeting at work. I’ve even seen them in my dreams. And it’s all because of The Witness.

The new game, the long-awaited follow-up to the 2008 indie hit Braid, is about exploring a mysterious, deserted island and solving puzzles. And while that description is accurate, it also doesn’t do the game justice. The Witness might just be the most ambitious puzzle game ever made: its large open world is dense with clues and hints, and the hundreds of puzzles each build off of each other in surprising and inventive ways. The game manages to communicate complex ideas without speaking a word, and by the end you’ll be solving puzzles that would’ve seemed impossible at the outset. It’s a massive game; if you solve everything, you can spend upwards of 100 hours on The Witness’ intriguing island.

But it’s also a game that can be immensely frustrating, with some puzzles so challenging it took me days to complete them. Those were the ones I couldn’t stop dreaming about.

The Witness opens in a dark tunnel. As you make your way toward the light at the end, you come across a door with a small electronic panel beside it. On the panel’s display is a line, and in order to open the door you simply trace the line; the game never explains this to you, but it feels like the right thing to do. Then, "pop," the door opens and you’re bathed in sunlight. This door is just the first lesson in The Witness’ masterclass on puzzles. From then on, everything you do in the game will be a variation on tracing a line. The earliest section has you tracing those lines through increasingly complex mazes, but the way the game manages to build an entire, massive experience around this initially simple mechanic is nothing short of incredible.

Perhaps the most impressive thing about The Witness is how it eases you into its world, teaching you its logic without actually telling you anything explicitly. That initial panel is just the first example of a puzzle designed not necessarily to challenge you, but to teach you something for when the challenge actually ramps up. Most of the puzzles are grouped together in sections of five or six challenges, each designed to introduce a new idea. These groups of puzzles tend to follow a standard path: the first one seems too easy, then you have an epiphany when you realize the new twist, and then you scratch your head in bewilderment at the challenge in front of you.

Discovering the solutions is the best part of The Witness

What makes the puzzle design truly special, though, is the way it reflects the world around it. The Witness is about observation as much as it’s about drawing lines through mazes. In most games I tend to run through as quickly as possible, letting much of the world breeze past me, but you can’t do that in The Witness. Without spoiling too much — because discovering the solutions is the best part of The Witness — I’ll just say that almost everything you see or hear in the game can be a clue, right down to the blades of grass and broken twigs on the ground. I spent more time than I care to admit staring at a tree, trying to see if its branches held the clue to a puzzle I was stuck on. It’s like the island itself is a puzzle, and every aspect of it is designed with that in mind. The game doesn’t even have music, because it would be a distraction. I kept a notebook with me as I played, and filled multiple pages with hand-drawn mazes and notes; by the end it looked like the furious scribblings of a mad man. (The Witness is also a great game to play while someone else watches, as a second pair of eyes is very handy.)

The island is designed in a way that minimizes a lot of the frustration that comes from being stumped on a particular puzzle. While it’s full of lots of locked doors and blocked off areas, it’s also very open, letting you explore different areas in any order you wish. This means that when you get stuck on one section of the island, you can simply take a break and explore elsewhere. If you see something cool over the horizon, you can probably walk there in just a few minutes. I often found that some time and distance were all I needed to solve a tricky problem, so the ability to drop a puzzle and come back later is very welcome. And once you become accustomed to the game’s logic, you’ll know which puzzles you’re able to take on; if one seems absolutely impossible, it’s likely because you haven’t learned the rules yet, so you’ll have to explore elsewhere first. 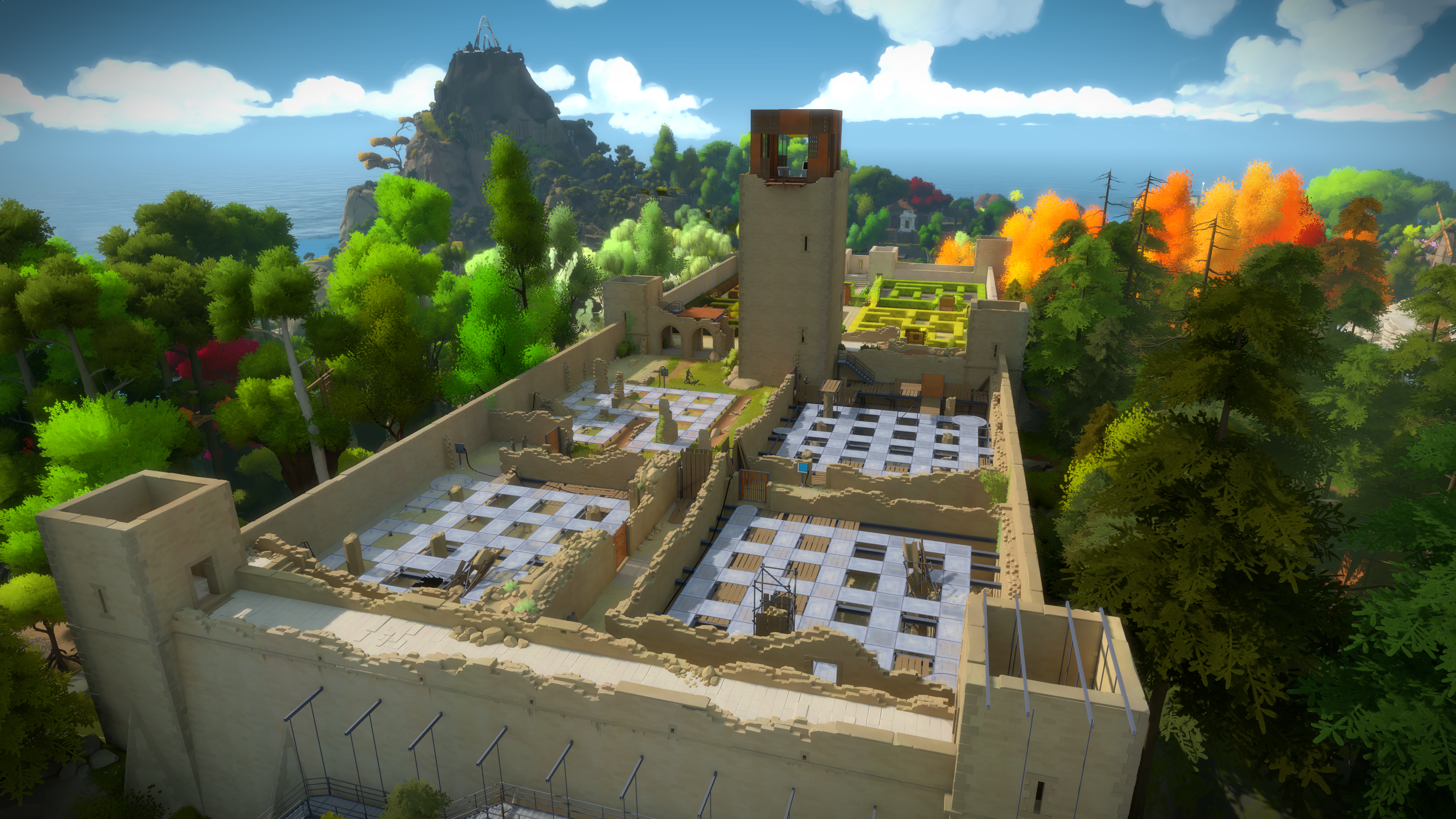 It’s still frustrating to come up against a puzzle you simply can’t figure out, though. I spent equal amounts of time in The Witness awed at its intricate design and frustrated at its difficulty. And while the open structure eases that frustration for much of the game, as you approach the end, your choices become more and more limited. I found myself at a point where I had about a half-dozen puzzles I needed to solve, and I was absolutely stumped on all of them. I spent close to two days making no progress at all, just banging my head against a wall trying to figure out those few last puzzles. It was not fun. (Luckily you don’t need to complete every single puzzle to see the ending; I finished a shade under 400 in my playthrough.)

Sometimes the game made me feel like an idiot

These moments sometimes made me feel like an idiot, with a solution so simple that I wondered how I could’ve missed it. Other times it was because I wasn’t being as observant as The Witness wanted me to be, so I missed some tiny clue that could only be seen if I was looking at just the right spot at just the right angle. But sometimes the game feels hard for the sake of being hard, and when you come across a seemingly impassable puzzle, it brings the whole experience to a halt. Toward the end of the game I often felt more relief than joy when finding a solution.

That frustration might be unavoidable, however, because without it The Witness loses a lot of its power. What makes the game so special is how it takes the creed "show don’t tell" to its absolute extreme. When a game doesn’t tell you how to solve a problem, but you manage to do so anyway, it’s incredibly satisfying. I’ve never felt as smart playing a game as I have playing The Witness, and it’s because of how it forced me to think in different ways, to slow down and really look at the world around me. If there was some kind of hint system, it wouldn’t have felt the same. By the end of the game I still didn’t know much about the island — the tiny fragments of story weren’t enough to really tell me anything — but it didn’t really matter, because I felt like I learned something, even if it was just how to solve mazes on a mysterious deserted island.

I’m not sure yet if I’ll go back to finish those puzzles I didn’t manage to solve, but I know one thing: I won’t stop thinking about them for a long time.

The Witness is available now on PS4 and PC.

Read next: The creators of The Witness on how they made a 100-hour puzzle game