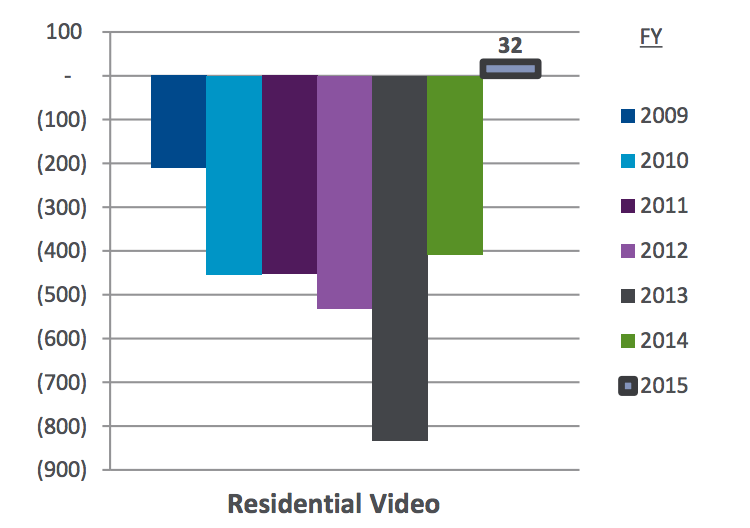 That chart (made by TWC) doesn't even go back far enough to show the last year Time Warner Cable had a net add of video subscribers — that was back in 2006. So it's been almost a decade since it had net video additions. Time Warner Cable doesn't give an explanation for why this sudden growth appeared, but it does mention that premium cable networks are doing better, as is on-demand revenue thanks to events like the Mayweather–Pacquiao fight. Overall, though, video numbers still aren't great for Time Warner Cable. Programming costs grew 8.6 percent for the quarter, and total residential video revenue shrunk over the year.

Broadband, of course, is growing much faster

The video figures came as part of Time Warner Cable's fourth quarter earnings for 2015, which it reported this morning. It saw revenue of $6.07 billion with $486 million in net income. Revenue is slightly up, from $5.79 billion this quarter last year, while net income is down, from $554 million.

While Time Warner Cable's surprise of the quarter was video additions, internet service is still the bigger area of growth. It reported a net addition of 281,000 broadband subscribers, hitting 1 million added subscribers for the full year. Revenue from residential data services is up, to $1.8 billion from $1.6 billion year over year. Time Warner Cable is well aware that its subscribers are broadly headed from video to the web, and on its earnings call, company executives frequently referenced the cable box-free service that it's trialling right now in New York.