CES hasn't started yet, but Samsung was apparently so eager to show off its new, exceptionally odd fridge / smartphone hybrid that it posted a few official photos online. Alongside a variety of other products, the company's Korean Flickr feed includes pictures of what Google Translate calls a "family hub refrigerator." It looks exactly like the thing we saw on CES advertising banners earlier today — which is to say, it looks like a normal fridge with a giant Android-esque phone glued to the door. Seriously, here's a closer look at the buttons on the bottom of that front panel:

As we noted earlier, Samsung has a variety of "smart home" technology already; it just doesn't usually take the phone / appliance connection quite so literally. Since none of these photos show a live screen, we still don't know precisely what one might be able to do on this fridge, or what the interface will look like — although based on the show floor ads, it includes basic features like calendar and weather displays, alongside Pandora and a shopping app. We'll know more (hopefully including pricing and release details) later this week. 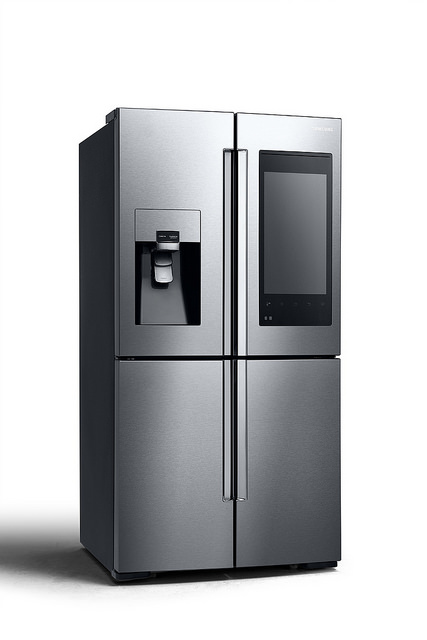