The Chinese-funded EV company still hasn’t shown a real car, but this is pretty cool

Faraday Future — the California-based electric car company that’s been operating in stealth mode for the past year and a half — made its first big splash on the eve of CES this week with the unveiling of the FFZERO1, a high-performance concept car. The sinewy machine looks more appropriate for a race track than a city street thanks to a claimed 1,000 horsepower, a 0-60 time under three seconds, and a top speed over 200 miles per hour. Of course, those are all purely theoretical numbers since this is just a concept, though the company teases that it could see “limited production.”

The design features a glass roof, which offers a clear view of the white carbon fiber interior and some of the car’s more novel ideas, like a smartphone mount in the center of the steering wheel, the Halo Safety System that supports the driver’s head and neck, and a helmet that feeds the driver water and oxygen. The instrument panel is also designed to gather biometric data about the driver.

Realistically, the FFZERO1 is not going to be Faraday Future’s first production car — instead, they’re using it to show off the potential that Faraday sees in its upcoming billion-dollar Nevada factory. The concept’s underlying platform, which it calls the Variable Platform Architecture, is touted as being highly customizable. "That platform is done on a very modular and flexible basis such that we can change the size of the platform," Nick Sampson, a senior VP at Faraday in charge of R&D and engineering, told us in a phone interview before the press conference. "We can change the number and power of the drive systems. We can change the physical size and electrical size of the battery packs, so we can get bigger and larger packs and smaller packs both on the electrical size and physical size because of the modularity of how the battery architecture is being done, which is unique compared to anybody else in the industry. The underlying story is all about the platform that’s being built." 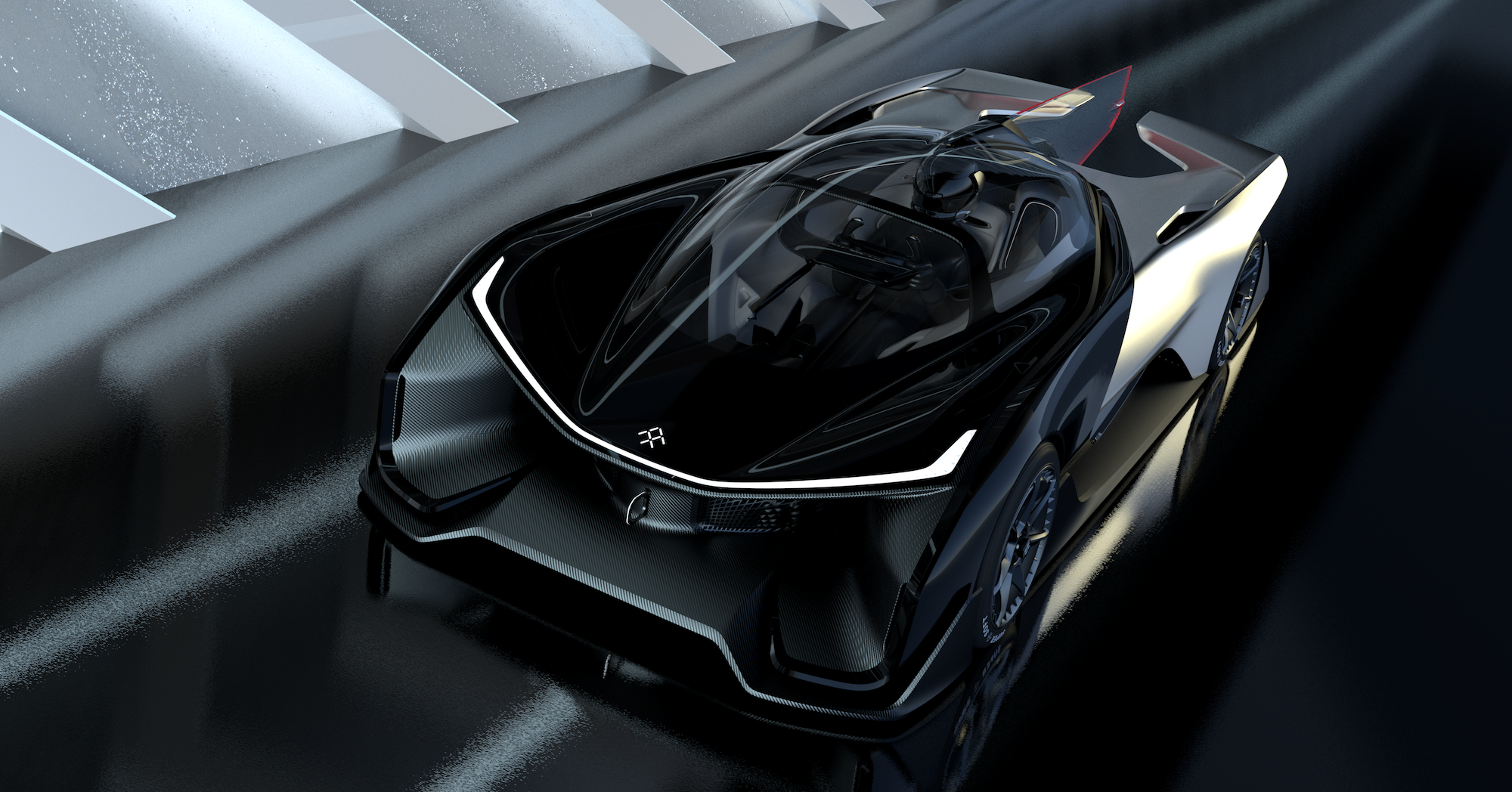 That kind of flexibility is important: Faraday has hinted at operating under an unusual business model, where users would "subscribe" to a plan that gives access to autonomous vehicles of different types depending on their needs. A subscriber could request a cargo vehicle on one day, for instance, and a sporty sedan on the next.

The Verge first visited Faraday Future’s Southern California headquarters in November, where we experienced a version of the car in virtual reality on a simulated racetrack, which the designers also use in their studio design process. At CES, the company has Oculus Rift headsets programmed to show off FFZERO1’s performance, which comes courtesy of separate motors at each wheel.

The FFZERO1 isn’t a production car

But again, the FFZERO1 isn’t a production car, and it has a very different exterior from the covered prototype we were shown at the headquarters. "The concept is an amped up version of this platform," says Faraday spokesperson Stacy Morris. "It’s going to have four motors. It’s a one-seater hypercar." She compares the design of the battery pack to the look of a Hershey bar: the concept uses adaptable strings of batteries, in which rows of batteries can be removed or added. The placement of the motor can also be shifted within the platform to make a vehicle that is front-wheel, rear-wheel, or all-wheel drive.

"We’re working with the biggest and best battery cell suppliers in the world and working with them to design the architecture and battery packs, which will be done in house, in a way similar to the Tesla model," Sampson says. "They work with Panasonic, but the packs are all done by Tesla. We are designing our own packs and our own control systems." Faraday declined to disclose who its cell suppliers are, however.

The source of Faraday’s obviously substantial funding has been a mystery, but that’s finally coming into focus this week, too: the company has announced a strategic partnership with Chinese media firm LeTV, headed by billionaire Jia Yueting, who Forbes has reported to be the primary investor in the company’s new $1 billion, 3 million-square-foot factory. "We are two separate companies, but we are leveraging their expertise with technology and content," Morris says of LeTV, while touting Faraday’s "diverse funding strategy."

"We are going to have other sources of funding," she says. "We see the main markets being the US and China, but it’s a global launch strategy. The way automakers need to enter the market is often through these joint partnerships, so our association with LeTV will be helpful in entering China." LeTV, maker of smartphones, connected TVs, and media, could support Faraday Future’s efforts to develop content for consumption in autonomous cars, Morris says.

Faraday Future plans to break ground on the factory north of Las Vegas in the next few weeks, a futuristic space that the company sees as a tourist destination. "We are moving fast," Morris says. "Showing a high-performance vehicle speaks to our DNA. The company’s been around for less than 18 months, and we’re now up to 550 employees in Southern California. Bringing a car to market, we’re trying to do it as quickly as possible, but we are going to make sure that quality is a priority."

Even though it still doesn’t have a real product in sight, Faraday asserts that its nimble structure gives it an edge over traditional automakers. "We’re able to take opportunities and can change plans quickly," Sampson says. "Largely things are going in the direction we wanted, but also the type of organization we’ve set up, we need to be dynamic and flexible. We need to be able to react to need, which is one of our advantages. Our whole ecosystem is about being adaptable and flexible."

For now, the FFZERO1 gives Faraday a short bump of hype, but eventually, Sampson and team will have to deliver a real electric vehicle that people can actually buy — or subscribe to, as the case may be. The company hasn’t offered any updates on when the factory will be completed, but plans to launch an actual car "within the next couple years."

E
Emma Roth23 minutes ago
Celsius’ CEO is out.

Alex Mashinsky, the head of the bankrupt crypto lending firm Celsius, announced his resignation today, but not after patting himself on the back for working “tirelessly to help the company.”

In Mashinsky’s eyes, I guess that means designing “Unbankrupt yourself” t-shirts on Cafepress and then selling them to a user base that just had their funds vaporized.

At least customers of the embattled Voyager Digital crypto firm are in slightly better shape, as the Sam Bankman-Fried-owned FTX just bought out the company’s assets.

The rocket — and the Orion spacecraft on top — are now back inside the massive Vehicle Assembly Building. Facing menacing forecasts, NASA decided to roll it away from the launchpad yesterday.

How Arm conquered the chip market without making a single chip, with CEO Rene Haas

Must Reads
Must Reads
A
Andrew J. HawkinsTwo hours ago
Harley-Davidson’s electric motorcycle brand is about to go public via SPAC

LiveWire has completed its merger with a blank-check company and will make its debut on the New York Stock Exchange today. Harley-Davison CEO Jochen Zeitz called it “a proud and exciting milestone for LiveWire towards its ambition to become the most desirable electric motorcycle brand in the world.” Hopefully it also manages to avoid the cash crunch of other EV SPACs, like Canoo, Arrival, Faraday Future, and Lordstown.

That’s Ryan Morrison, CEO of Evolved Talent Agency, which represents some of the biggest streamers around. And he’s right — as you can read in this investigation from my colleague Ash Parrish, who looked into just what’s going on with Amazon’s livestreaming service.

Nreal’s $379 AR glasses launch in the US today

NASA’s spacecraft crashed, and everyone is very happy about it.

Otherwise, Mitchell Clark is kicking off the day with a deeper look at Dish Network’s definitely-real 5G wireless service , and Walmart’s metaverse vision in Roblox is not looking good at all.

Forbes reports that rising inflation and falling stock prices have collectively cost members of the Forbes 400 US rich list $500 billion in 2022 with tech tycoons suffering the biggest losses.

Roomba’s latest robot vacuum has a robot mop on top

The Double Asteroid Redirection Test (DART) scored a hit on the asteroid Dimorphos, but as Mary Beth Griggs explains, the real science work is just beginning.

Now planetary scientists will wait to see how the impact changed the asteroid’s orbit, and to download pictures from DART’s LICIACube satellite which had a front-row seat to the crash.

At 7:14PM ET, a NASA spacecraft is going to smash into an asteroid! Coverage of the collision — called the Double Asteroid Redirection Test — is now live.

How to buy a PlayStation 5

R
Russell BrandomSep 26
The US might still force TikTok into a data security deal with Oracle.