HP's EliteBook Folio is like a MacBook that runs Windows

The tech world has traditionally cared more about how a thing works than how a thing looks. But how a thing looks — and the feeling you get while using it — can be every bit as important. That's an idea the tech industry has slowly been picking up on, with stylish phones, fashionable wearables, and recently, even some sleek Windows notebooks. The latest beneficiary is HP's EliteBook Folio, a brand new laptop that's thin, light, and is pretty darn good to look at.

The EliteBook Folio is HP's answer to the MacBook. It isn't the most powerful computer in the world, but it's easy to take around with you and, in future generations, will likely grow much more capable. The machine is running on one of Intel's Core M processors (either an M3, an M5, or an M7), all from the new Skylake line. Storage ranges from a 128GB SSD to a 512GB SSD, and RAM sits at 8GB. At its entry level, the Folio includes a 12.5-inch 1080p display, but anyone buying this will likely want to spring for its 4K option. I wasn't immediately blown away by its colors, but the 4K screen still looked nice in the short time I spent with it.

That means, like the MacBook, the Folio is really going to be a machine for the basics. You won't be editing video on this, and you'll want to wait for reviewers to check out how well its processor is able to handle that 4K display. It also shares similar limitations, like having a bare minimum of ports, just two USB Type-C ports and a headphone jack. Battery life is supposed to run for about 10 hours. 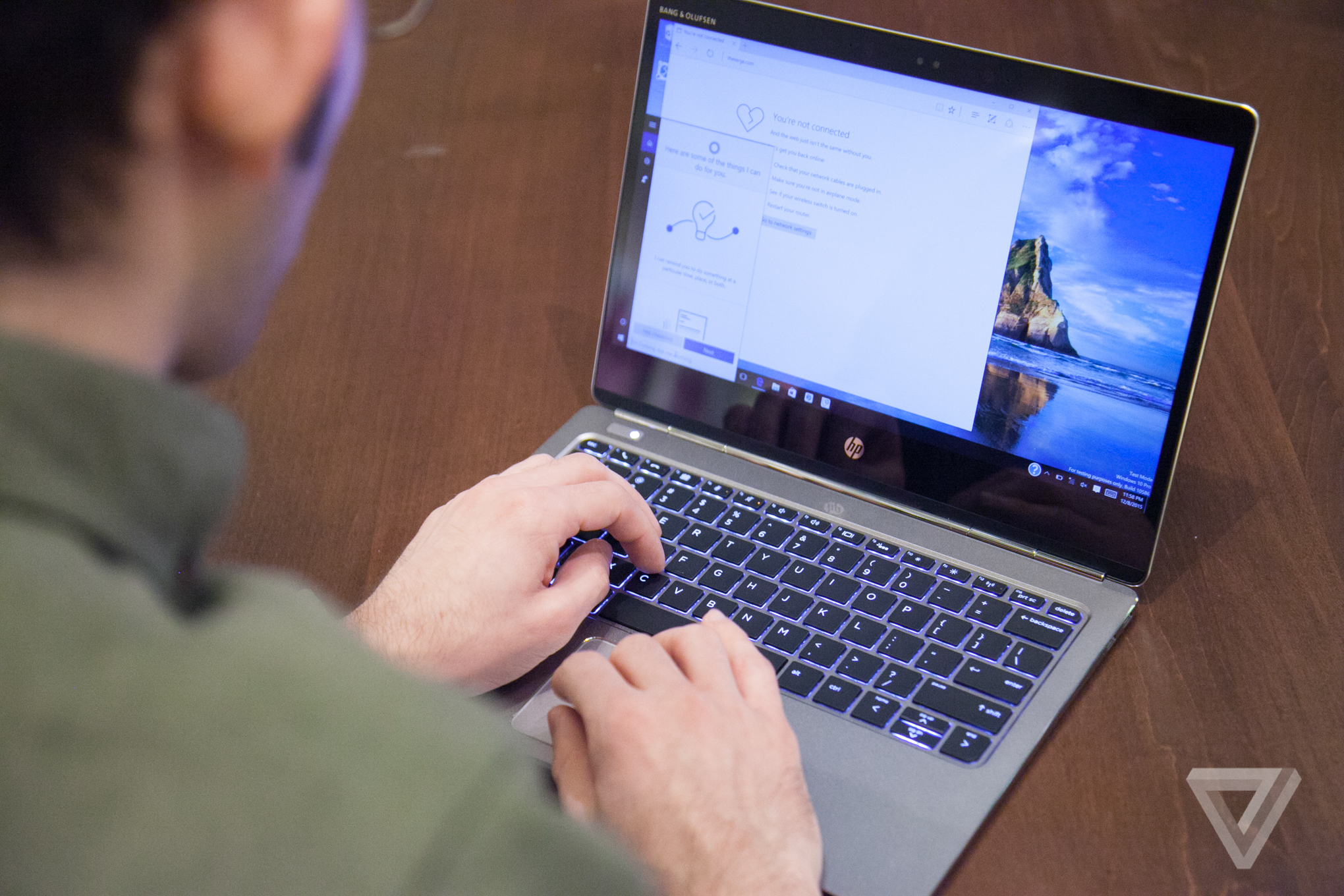 On the other hand, like the MacBook, the EliteBook Folio is exciting because of the package more than the power. The laptop is under 0.5 inches thick and is supposed to weigh less than 2.2 pounds. Physically, you'll likely be reminded more of Dell's XPS 13 than anything by Apple. The Folio has similarly tiny bezels that emphasize the display over the computer as a whole. It's made of aluminum, so it feels good, too. And like most Windows laptops, it can be configured to include a touchscreen. The Folio doesn't flip around, but its display can be tilted back until it's nearly flat against a table — although, I'm not sure when you'd want to do that. 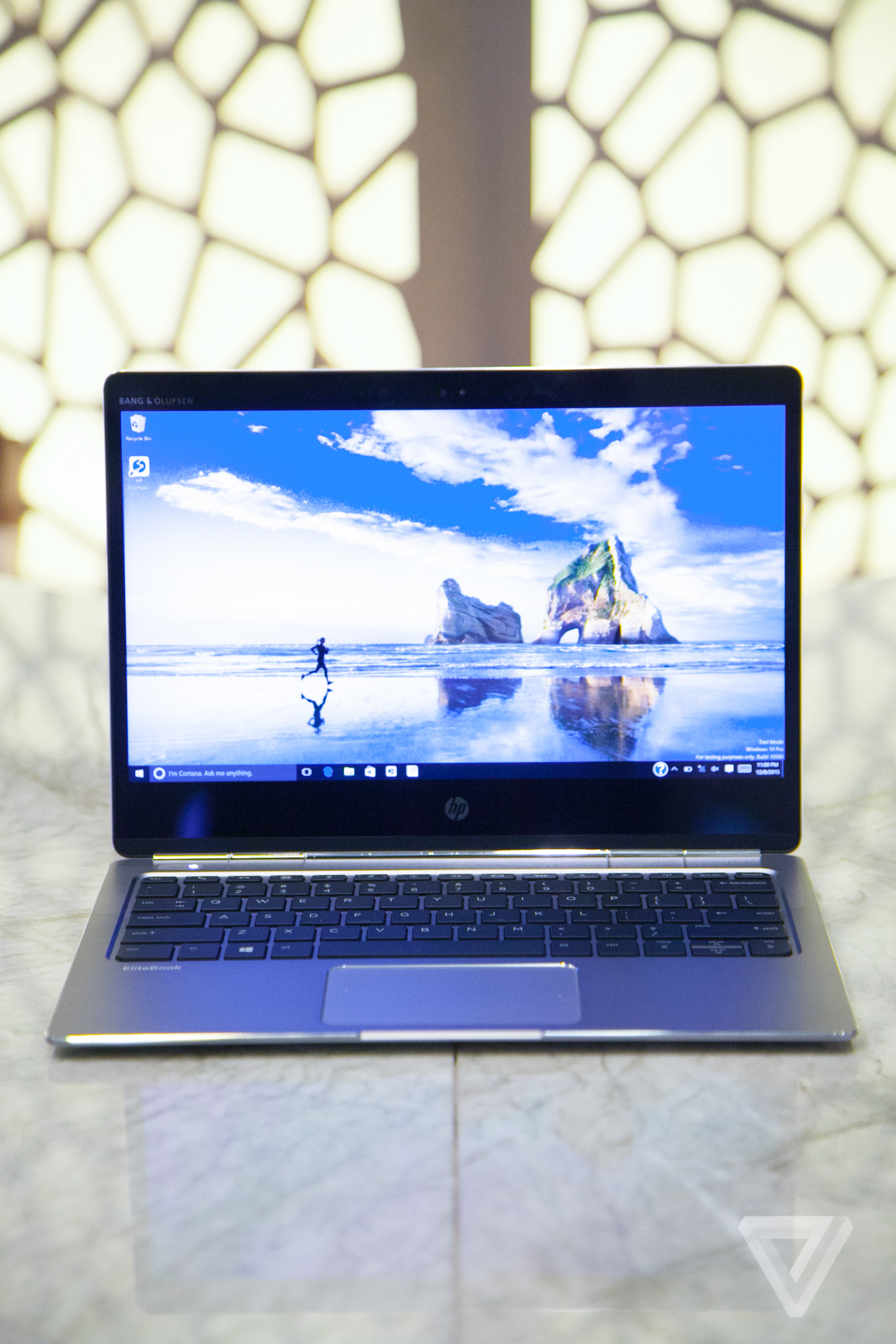 While HP expects consumers to buy the EliteBook Folio, it actually considers this machine to be a business laptop. For the most part, you can ignore that and avoid add-ons like a smart card reader, but there are some things about the laptop that have been tuned specifically for business users. That includes its sound system, which is supposed to be focused on voice, rather than music. HP says Skype calls should come through; it's unclear if that'll affect how music and movies sound.

Still, the Folio is likely one of the nicest laptops we'll see unveiled at CES. Its middle-of-the-road processor could give it a hard time competing with more powerful rivals like the the XPS 13, but the Core M's fanless design may be just what some buyers are looking for. Pricing for the Folio starts at $999 for a 1080p model; HP hasn't determined yet how much it'll cost to get one with 4K. They're supposed to go on sale in March.

In addition to the EliteBook Folio, HP is announcing a number of other new and updated laptops and tablets today. The most notable among those is a larger version of the Spectre x360; it has a 15-inch display that can be upgraded to 4K. There's also a new 12-inch model of HP's Pavilion x2 convertible tablet, which includes Atom and Core M processors. Other models in HP's EliteBook line are also getting a spec refresh.