Volkswagen’s electric bus concept is a groovy, far out vision for the future

Will you make the wacky electric Microbus your Budd-e?

If you took a Volkswagen bus and stuffed it full of futuristic CES buzzwords, this is basically what you'd end up with. It's called the BUDD-e Concept, and it is, according to Volkswagen, a "gateway to the future."

It's also a bit of marketing slight of hand to take your mind off VW's "clean diesel" über-scandal, and that's fine. If Volkswagen is to survive, it needs to keep innovating. What's not fine is the silly capital letters in the name, which I will not use any more.

The Budd-e is based on Volkswagen's new Modular Electric Platform, designed specifically for electric vehicles. The front and rear electric engines are pushed as far to the front and rear of the vehicle as possible, allowing for an enormous, totally flat floor with lots of room for activities.

It has a 101 kWh battery, good for a total range of 373 miles in the ridiculously optimistic New European Driving Cycle, an EU standard for measuring fuel efficiency that appears to have no basis in reality. More realistically, you'd likely be looking at well under 300 miles, which is still pretty good for a car that doesn't actually exist yet. It'll get to a top speed of 93 mph and even supports cordless, inductive charging.

But don't worry about the specs. This car is really all about the design — and what a design it is. Inside and out, the Budd-e is stunning. I suspect that, like with many concepts, this is going to be a strictly love-it-or-hate-it affair.

The inside is where the really out-there stuff is. Volkswagen says the interior design is a "quantum leap" like the jump from flip phones to smartphones, or from analog to smartwatches. I'm not sure about that, but it's definitely adventurous. 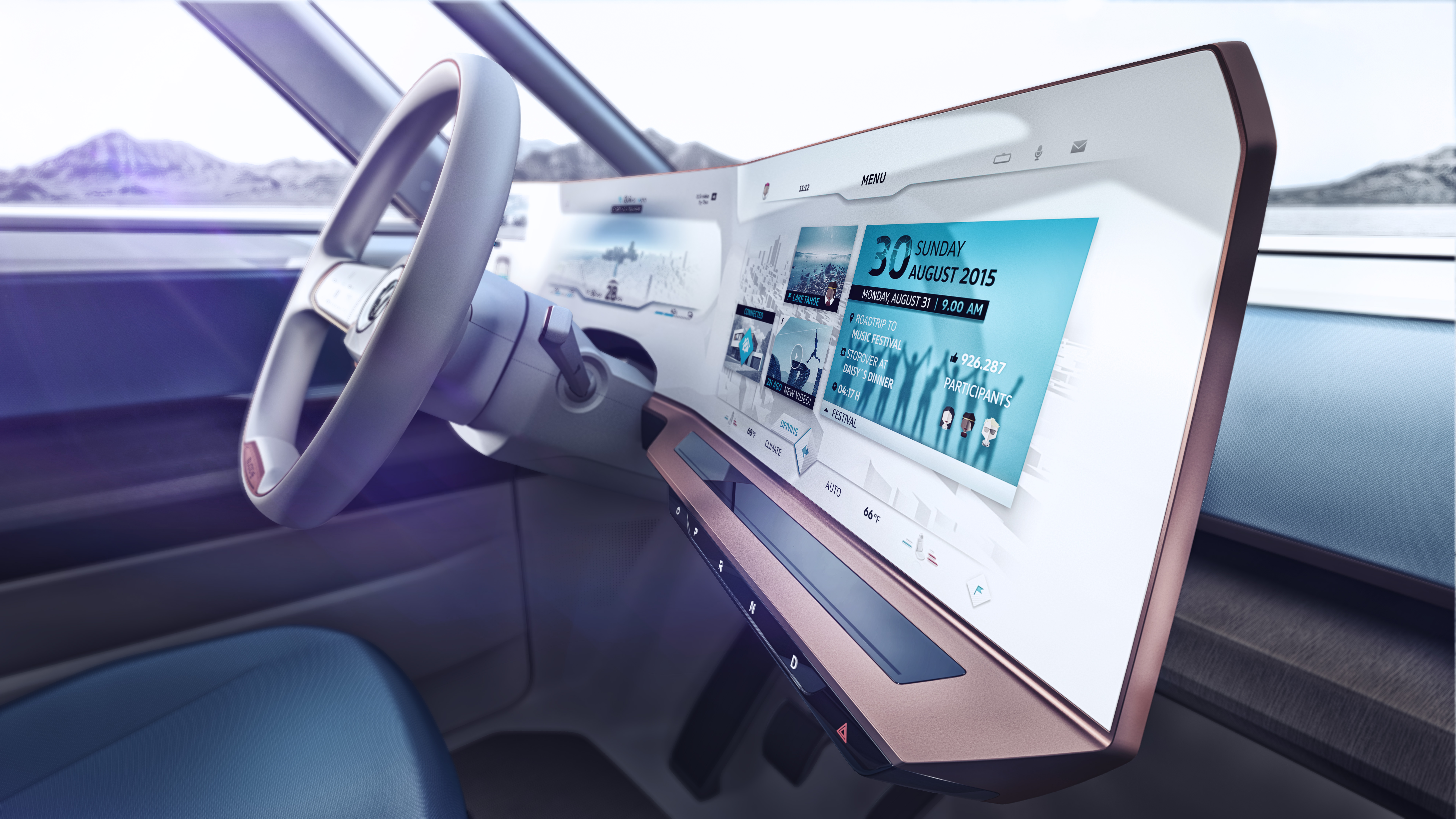 It blends the two panels of the instrument cluster and the central infotainment system into what is effectively one continuous screen. The "Active Info Display" is a flexible instrument cluster directly in front of the driver, while the second provides access to infotainment for all passengers. Everything is controlled by multi-touch or by voice command — just say "Hello Budd-e" to get it listening. The car even knows who is speaking, so if a passenger in the rear asks to turn down the heat, it will only be lowered in their climate zone. Natural speech is supported too, so commands like "it's too hot in here" are supported.

The screen is broken out into three different sections, each focused on a different task: Drive (with navigation mapping and other similar data), Control (with vehicle status-type information), and Consume, which includes things like audio controls, as well as smartphone integration for displaying messages, calendar, and weather data.

Feeds from the cameras that replaced the wing mirrors are fed to multifunction displays near where the mirrors would be seen normally, and when stationary they're used as command consoles to open and close the electric doors.

The steering wheel has no buttons, instead using swipes and touch pressure with haptic feedback, something that VW says is "more intuitive" than current steering wheel control setups. The Budd-e uses infrared sensors to know when passengers are approaching and can open the doors with a simple wave.

Then there are all the connections between the Budd-e and the Internet of Things. Volkswagen foresees, like many automakers, a time when our smart homes and smart cars are interconnected, and that's especially true here.

The Budd-e would be interconnected with things like home HVAC and lighting systems, and the car itself would be turned into a digital "drop box" where parcel delivery services could use a digital key to put packages inside the storage compartment beneath the tailgate.

The outside is slightly more conventional, albeit with a two-tone white-and-gold color scheme. It's a deliberate throwback to the classic VW Microbus, totally updated for the twenty-first century. LED lights are everywhere, including an illuminated VW logo on the front grille. Door handles and wing mirrors are totally gone, replaced with "electronic solutions." The taillights are made from one continuous LED lightstrip, giving a unique wraparound effect.

All told, the Budd-e is an intriguing, loony, amazing vision for the future of automobiles. And, for once, the manufacturer didn't mention a thing about the car driving itself. Talk about revolutionary.