Razer’s first ultrabook wants to be your only gaming PC

Razer’s range of Blade laptops have always been designed as portable gaming machines that were thick and heavy. Razer is changing things in a big way this year, and it wants to disrupt the PC industry with its first ultrabook. The Razer Blade Stealth looks just as good as the Blade laptops we’ve seen over the years, but it’s no longer a 4-pound beast. It’s designed to be a regular ultrabook, so it’s just 0.52 inches thin and weighs 2.75 pounds. That’s a dramatic departure from the gaming laptops we’re used to seeing from Razer.

Razer hasn’t really held back on the specs for the Blade Stealth. Every model is powered by Intel’s latest Core i7 processors, and you can pick between 12.5-inch QHD or UHD touchscreen displays. There are two regular USB ports and a new Thunderbolt USB Type-C port designed to charge and connect monitors and accessories. It’s also the only laptop with individually backlit RGB keys, meaning you can really customize the colors and effects on the Blade Stealth.

It's a pretty ultrabook

It looks great, and it’s really not that heavy when you pick it up. It’s a tad heavier than I’d want from a 12.5-inch laptop, but the build quality felt really solid during my brief experience with the Blade Stealth at CES this week. Razer is using its usual CNC-milled aluminum so it feels like a true premium laptop. It’s clear Razer is aiming for Apple, Dell, Lenovo, and others here, and it definitely competes well.

Razer has understandably made some sacrifices to create a smaller and lighter laptop, though. The most obvious change is the graphical power. Intel’s HD 520 powers the Blade Stealth, so you’re not going to be able to use this for the latest and greatest games on the go, but for casual ones it’ll be fine. That might disappoint some, but Razer has a future-proof solution that can turn this ultrabook into your only gaming PC. 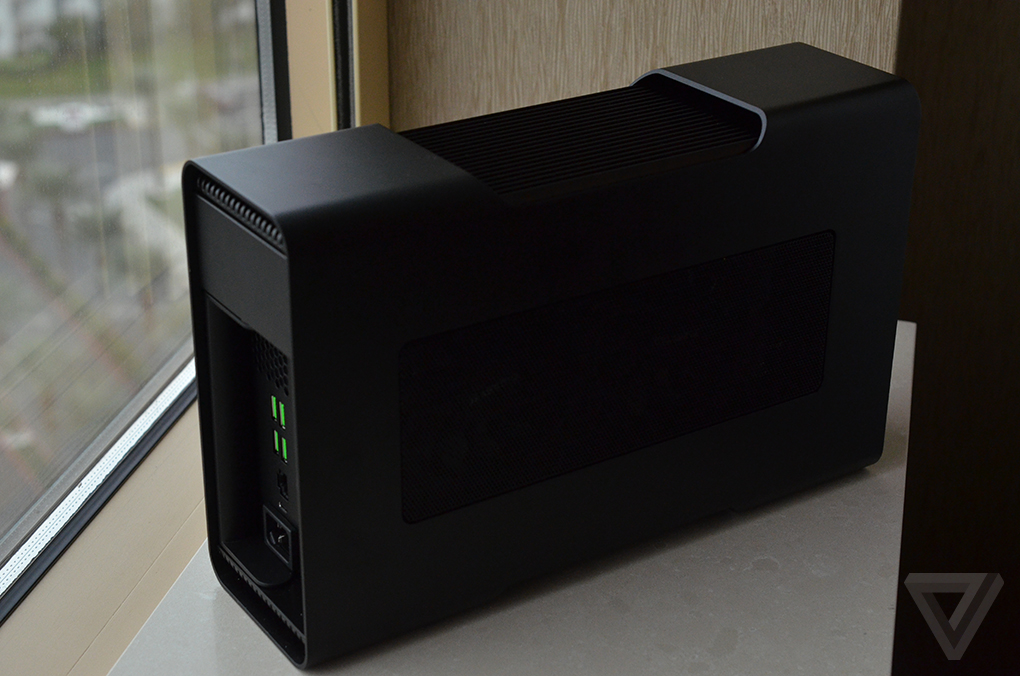 Razer’s new Core accessory is an external desktop graphics enclosure. It looks like a miniature PC on your desk and it can house most PCI Express graphics cards from Nvidia or AMD. You just stick the card in and the enclosure connects to the Razer Blade through the Thunderbolt USB Type-C port. The Razer Blade will receive power and four additional USB ports at the rear of the Core, alongside an ethernet port. As with anything Razer, there are also two Chroma lighting zones to sync up with the rest of Razer’s light show.

The power of USB Type-C in action

Thanks to Windows 10, it’s really seamless to switch between the Intel graphics and this Razer Core external enclosure. It’s just as simple as unplugging the USB Type-C cable. If you’re planning to attend a LAN party without a monitor, it will even push the power of the external graphics card back to the main display. That’s a neat trick that really allows gamers to buy this regular powerful ultrabook for everyday tasks, and transform it into a full gaming PC. Personally, I don’t like heavy laptops, but I want something I can play games on when I’m at home. This seems like a good compromise, especially as you can upgrade the graphics card freely.

Razer is planning to be really competitive with its pricing, and the base model is priced at $999 with the high end at $1,599. That’s a great price for what you get, but the company hasn’t priced its Razer Core graphics enclosure yet. Razer’s Blade Stealth laptop is available to order today and will ship in January, with retail availability planned for Microsoft Stores next month.