I drove the Chevy Bolt, GM's electric car for everyone

So, here's a crazy thing: this time last year, no one even knew that GM was working on an affordable, high-range electric car.

In automotive terms, going from concept to production to test drives in 12 months' time is an exceptionally tight schedule. There are regulatory hurdles and crash testing. There's the fact that engineering a good, roadworthy vehicle is fundamentally difficult and expensive. In reality, of course, development on the Bolt started long before the introduction of the concept car at NAIAS in Detroit last year, and it shows. I think this car might be ready for the real world.

But let's back up for a second and talk numbers. GM isn't going into any new details here, but the Bolt is expected to deliver "200-plus" mile range for a net price of around $30,000 after tax breaks. (That can be misleading if your income is too low to take advantage of the full tax credit, but the car will be well under $40,000 regardless.) The company tells me that 0-60 time will fall under 7 seconds, which should match or best vehicles of similar size and shape like Ford's C-Max.

My test drive of the Bolt ahead of its introduction today took place on a closed, walled-off course just a few hundred feet from the stage where GM Chairman and CEO Mary Barra will unveil it. The course wasn't nearly as big as I would've liked — I need to stretch the Bolt's legs before I issue a fleshed-out opinion on it — but I had enough laps to get the sense that this is a very unremarkable car on the road. And I mean that in the best possible way: GM is trying to make a car that real people want to buy. This isn't a parlor trick, it's not for speed freaks, it's not for tech nerds (well, maybe it is — more on that in a bit). The Bolt just needs to feel like a good, usable, everyday car that happens to be fully electric. Unlike a $100,000 Tesla Model S, "unremarkable" is high praise for a car in this category.

"You'll hear me say it's for anybody who wants to save time, money, and the environment," Barra told me in a conversation before she took the stage today. "We wanted it to be a great car, and to really separate it ... I think it's going to have wide appeal." 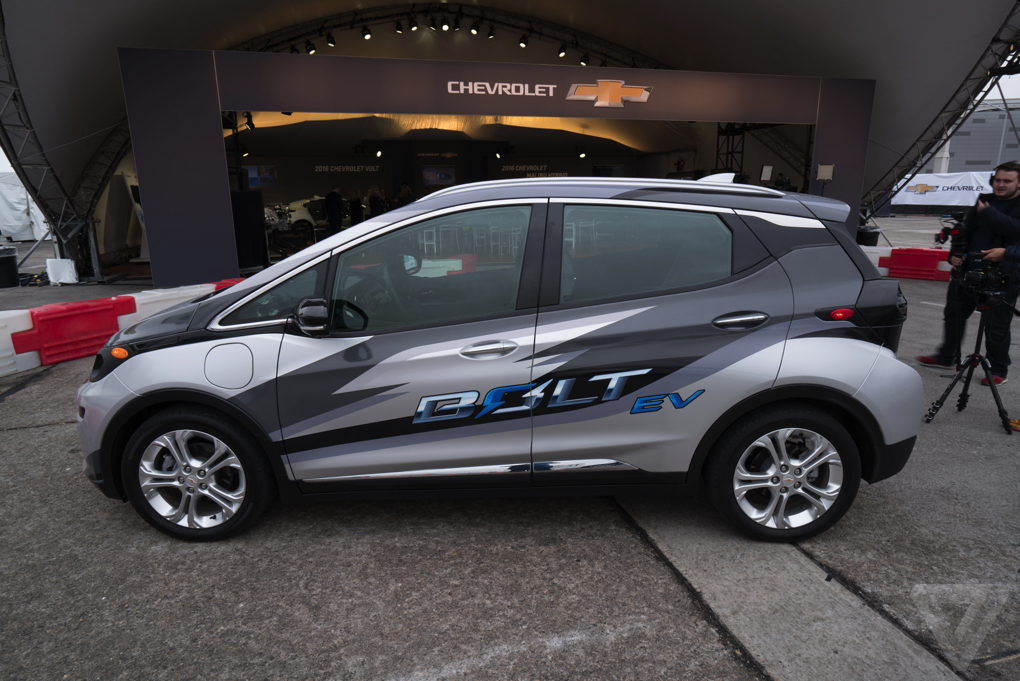 What exactly do I mean by "unremarkable"? Decent, usable acceleration (which, in typical EV fashion, is eerily smooth in the Bolt); handling that prioritizes comfort over performance; and, for the young families that could become a core target demo for cars like this, space. Space! I actually commented to the GM staff on hand that the Bolt has an optical illusory flair to it, because it's got a freakish amount of rear passenger legroom considering the compact dimensions. As near as I can tell, some of that legroom comes from thin front seats; they seemed comfortable enough to me, though you never know until you've road-tripped in them.

Weirdly, the most interesting thing about the Bolt might not be the drivetrain but the infotainment system, an LG-sourced unit that is unique to this car and is crazy good. (To be fair, when I say "crazy good," I mean by car standards — rarely are factory infotainment systems much more than maddening garbage fires that make your seemingly trivial task of changing the radio station a chore.) The Bolt's system is anchored by a 10.2-inch touch display that might be the most responsive I've ever used in a car — there were no appreciable delays between taps and responses, which was a baseline expectation for phones and tablets years ago that hasn't really taken hold in the auto industry yet.

"Unremarkable" is not an insult with this car

All of this is probably thanks to LG having a heavy hand in the Bolt's development. I think I even see some LG influence in the UI, which is flat, two-dimensional, and modern-looking — there's no skeuomorphism, no drop shadows or reflections that look like they were pulled from a five-year-old smartphone. The home screen is comprised of customizable widgets for different functions — music, battery status, and clock, for instance — that can be rearranged to the driver's content, and any widget can be made full-screen by tapping an icon in the corner. CarPlay and Android Auto are both supported. It's worlds better than the infotainment system on the first-generation Volt, and it's even substantially better than Chevy's relatively new system that's used across the portfolio. If GM is smart, it'll adopt the Bolt's hardware in more vehicles.

And there's one more tech trick in the interior: the rear-view mirror is replaced with an LCD display linked to a wide-angle camera behind the car. The value, or so the story goes, is that this kind of setup eliminates obstructions like pillars and rear passengers so you get a better view of what's going on. Shockingly, it's good. I thought I'd hate it, but I immediately adapted to it and treated it like I would a standard mirror. (And if you don't like it, you can flip a lever beneath the display and it magically turns into a regular mirror.)

None of this matters if GM can't make the Bolt in volume, customers can't be bothered to look at it in a world of cheap gasoline, or the upcoming Tesla Model 3 is a lot better. Any of those scenarios is possible. But regardless, I can't help feel like the company has just made history: it has produced a practical EV — without the traditional EV downsides — that many, many people can afford. And while I can't yet declare that it's great, I'm comfortable saying that it's not bad.

Of course, the Bolt is the first of its kind, but it certainly won't be the last. The auto industry is changing at an unprecedented pace right now, and if CES has taught me anything over the years, it's that the first-mover advantage doesn't mean much. GM is going to have to haul ass just to keep up — but so will everyone else. For owners, car-sharers, and riders alike, that's pretty awesome news.

More from this stream CES 2016 Day 3: All the news from Netflix, GM, and more