A convertible that makes sense

Awkward. That’s the word that comes to mind when I think of all of the 2-in-1 “convertible” laptops that have come to market in recent years, as PC makers try to adapt in a mobile-centric world and rejuvenate the market. A 13-inch or 15-inch laptop just doesn’t really work as a tablet. The option to detach a display from a full keyboard is a mild convenience at best.

But Lenovo, which has made a bunch of these convertible creations, has come up with something that not only makes sense, but nudges the category forward with a completely new kind of keyboard. It’s called the Yoga Book, and it’s an incredibly thin and light tablet-like machine with a flat, touch-sensitive surface that lights up into a glowing keyboard. This lower panel also doubles as a Wacom digitizer surface, which means you can use a stylus pen to draw on it as well.

To call the Yoga Book a laptop isn’t quite right, but it’s not just a tablet, either. The result is something in between: something eye-catching and something that feels futuristic, but at the same time, familiar. It starts at $500 for an Android version and goes up to $550 if you want Windows 10.

The biggest caveats I have with the Yoga Book are that its unique keyboard comes with a learning curve — I’ve been using it for a week, and my text is still riddled with typos — and that it’s not a very powerful machine. I doubt this will replace the laptop I use every day for rapidly typing out stories and processing photos. But those are heavy-duty use cases. Right now the Yoga Book fits into a space, figuratively speaking, where being mobile is more important than being aggressively productive. And its unbearable lightness just might win you over.

Between the Android model and the Windows version Android makes more sense to me since this feels more like a mobile device than a heavy-duty computing machine. But there are some limitations around Android OS, which I’ll get to.

It’s made of magnesium-aluminum alloy, has a 10.1-inch, full HD multi-touch display, and is built with the same watchband-style hinge that Lenovo’s bigger Yoga laptops have. This is what makes it a "convertible": you can fold it into a tablet, use the keyboard as a prop for the display, or just use it in traditional laptop mode. But unlike 13-inch or 15-inch laptops, having these options actually makes sense with the Yoga Book. It feels like a tablet when you fold the keyboard back.

it's easy to mistake this for an actual paper notebook

"The Book," which is what Lenovo executives called it for a long time before they came up with the official name, weighs just 1.5 pounds. This means it’s close to the weight of an iPad Pro plus smart keyboard, but it feels much lighter than that. And it’s definitely lighter than a Surface Pro and keyboard. When you’re carrying those products, there’s no doubt you’re carrying a tablet or laptop. With this, it’s really easy to mistake it for a paper notebook. 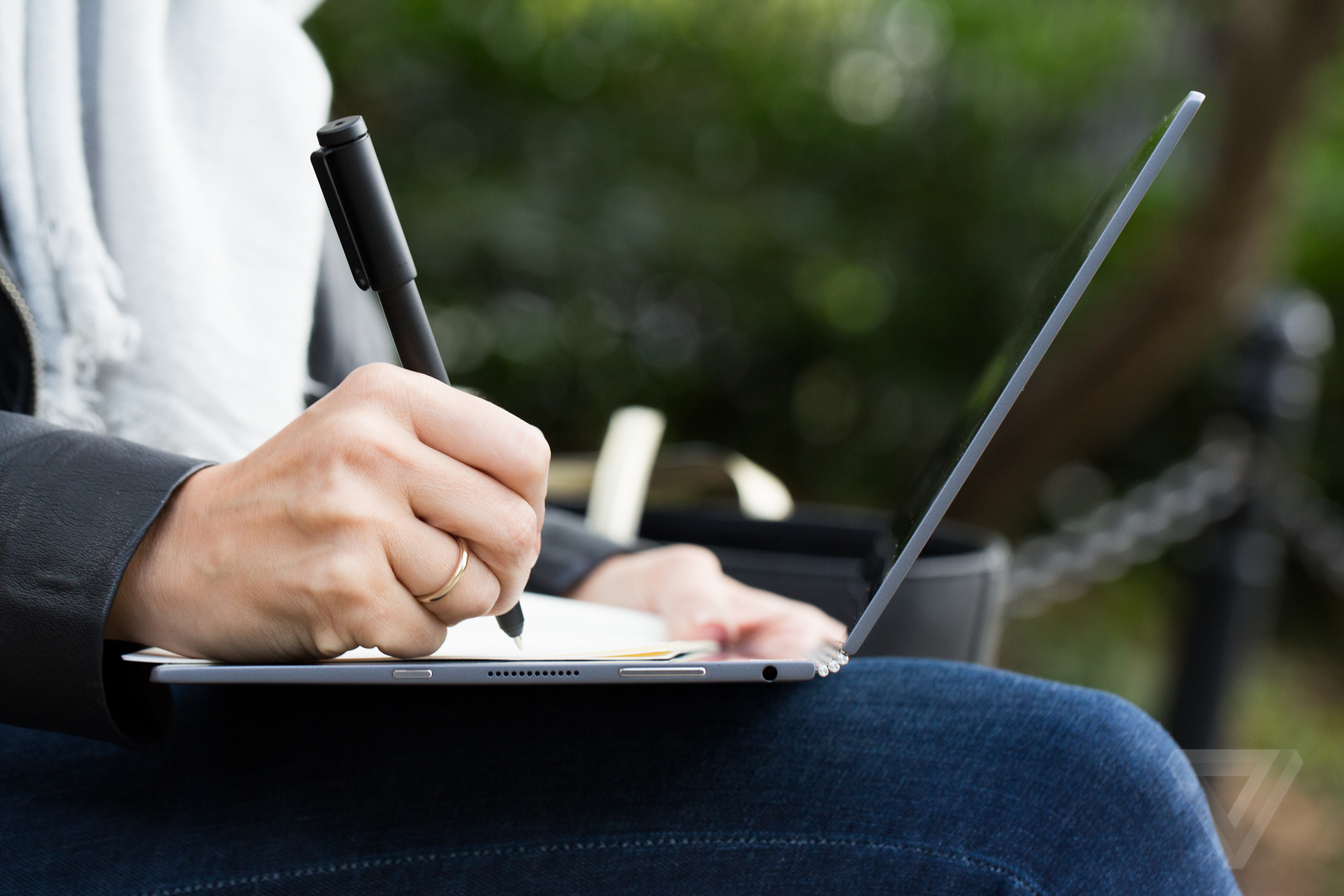 Not surprisingly, there are sacrifices when you’re working on such a tiny computer. The first is that it’s so light that it sometimes doesn’t balance very well on your lap. And, just like Apple’s 12-inch MacBook, there’s a shortage of ports. It has a Micro USB charging port, an HDMI port, a microSD port, and a headphone jack, and that’s pretty much it. No full-size USB or even USB Type-C. Some markets outside of the US will see a Yoga Book with a SIM card slot, but unfortunately that’s not happening here.

Its Intel Atom processor, which is in both the Android and Windows model of this computer, is also not the most powerful out there, and the 4GB of RAM is suitable for Android, but a bit lacking for Windows. Perhaps unsurprisingly, the performance stutters are more evident in Windows than in Android. 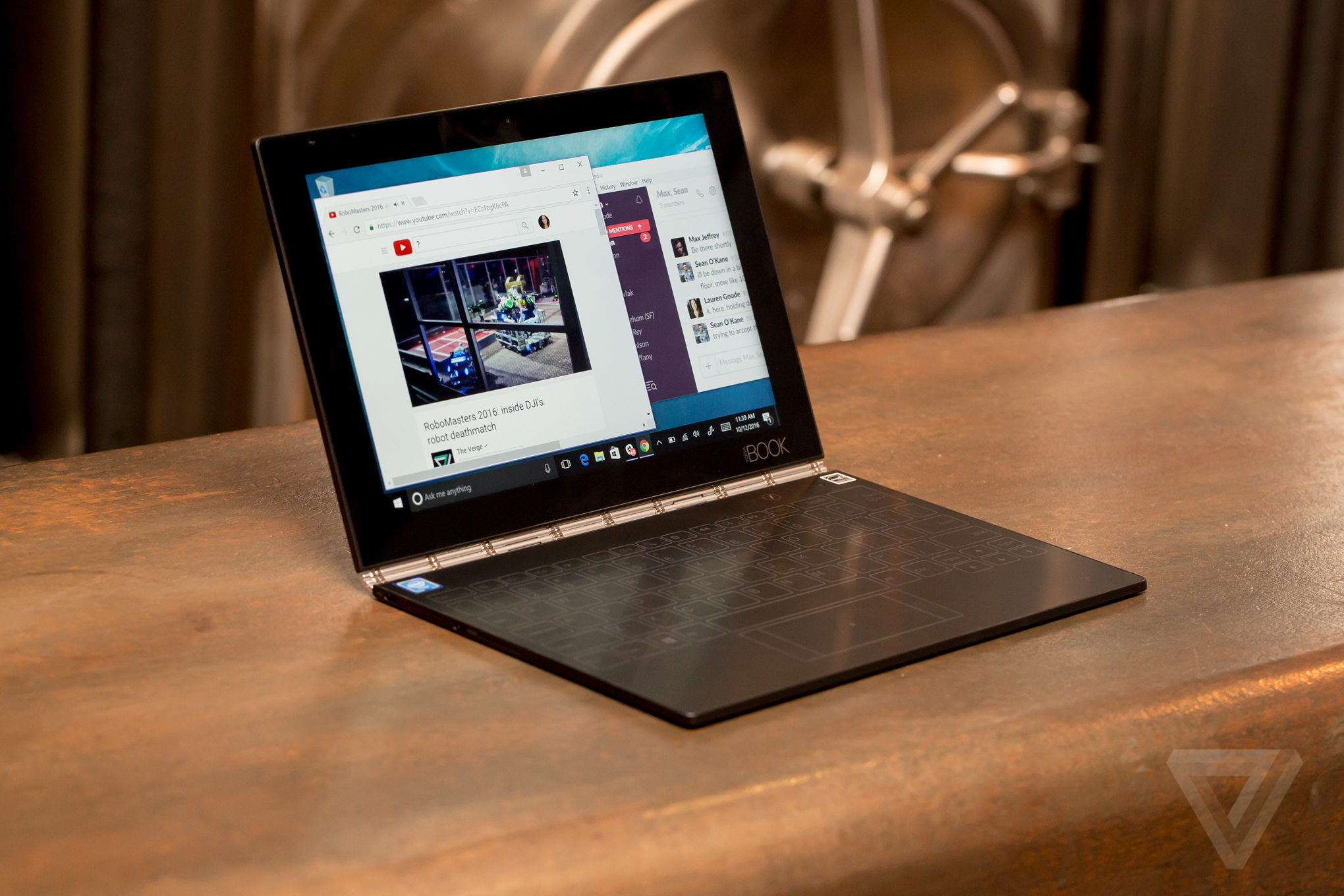 The "Halo" keyboard might just wow you enough, at least temporarily, to forget about that. Once you put the Yoga Book into normal laptop mode, the matte black lower panel turns into a glowing touchpad keyboard. It also vibrates when you tap on it. This gives a sense of haptic feedback, though it feels like the whole panel itself is moving, not the isolated keys you’re tapping at.

the halo keyboard really takes getting used to

After a few days of using the Yoga Book’s keyboard, I still don’t feel completely used to it. I wasn’t kidding when I said my text is filled with typos. (And I didn’t attempt to write this review solely on the Yoga Book.) But just like typing on a touchscreen, I’m getting there. It’s at least more comfortable than typing directly on a virtual keyboard that forces you to prop your hands up and blocks half of your display.

The keyboard panel also doubles as a Wacom surface, which requires you to use Lenovo’s "Real Pen" stylus (included in the box). And you can put a real pen tip in and write on a piece of paper or thin notepad over the panel. As a journalist, I liked the idea of opening up a physical notebook, slapping it on top of the Yoga Book, and taking notes that way, but in reality this surface is probably more appealing to designers or people who use styluses and digitizer pads more often.

Its battery life is impressive in terms of everyday usage. Lenovo is attaching a 15-hour claim to the Yoga Book, which seemed ridiculously long to me, especially after I ran Verge’s official, continuous battery test on it and it lasted about half of that. But my Verge colleague Dan Seifert, who also had a loaner unit, was able to use it for most of a work day and some of the next morning without charging it. 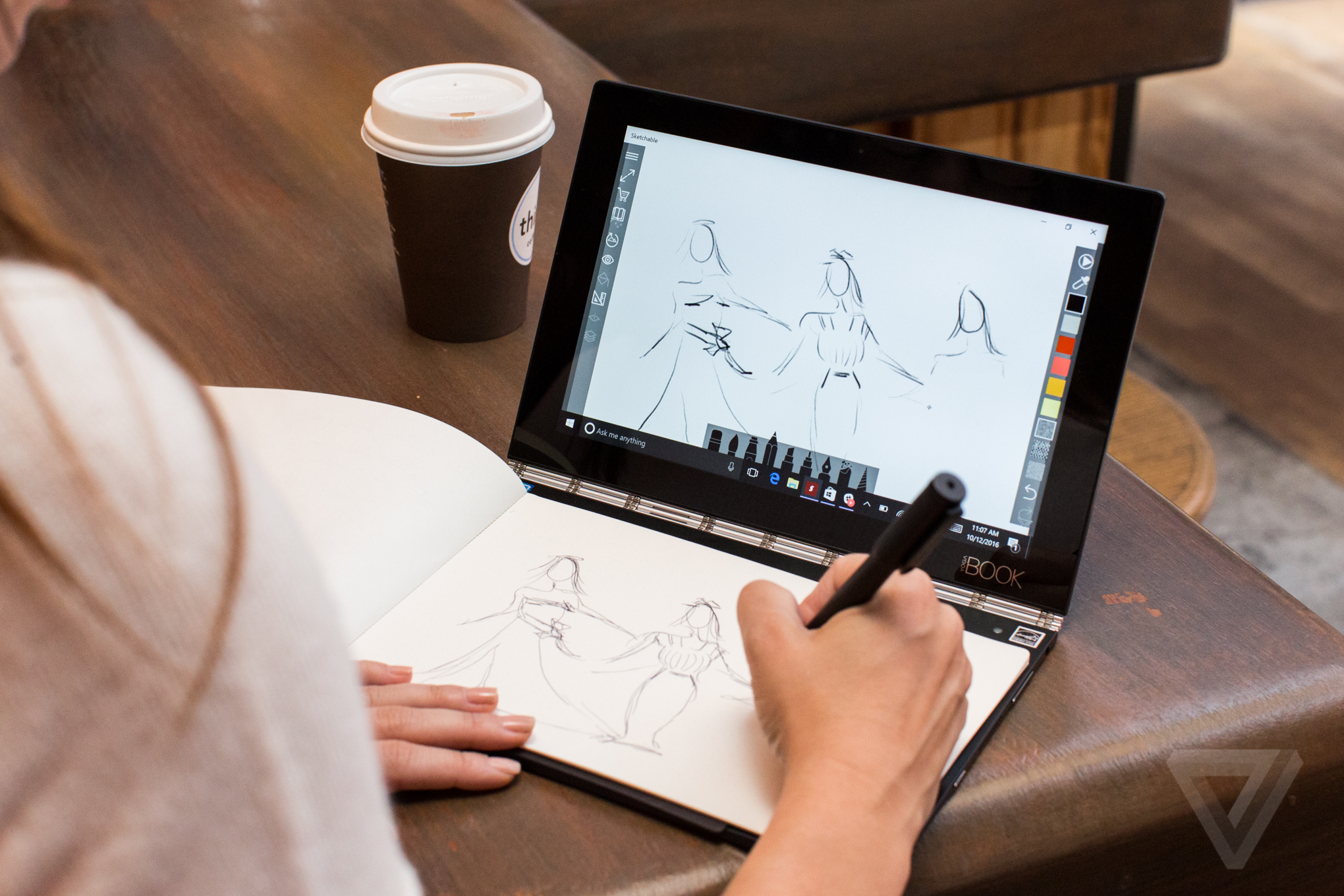 Despite its stunning looks and long battery life, there are some elements of the Yoga Book that remind you that Lenovo, at its core, is a mass producer of utility laptops and doesn’t have the same design pedigree as some of its PC competitors. For example, there is no indentation or lip along the front edge of the Yoga Book, so prying it open from a closed position requires digging in with your fingernails (a Verge co-worker suggested sliding a New York City subway card through it to open it). The Wacom panel tends to get dirty-looking quickly.

the yoga book makes more sense as an android computer, not a windows pc

The stylus pen is quirky: in order to switch from a stylus pen tip to a "real" pen tip, you’re supposed to grab the tip with a small hole in the pen cap and pull the tip out. More than once I forgot to switch from the "real" pen tip back to the stylus tip, and ended up scribbling real ink all over the Wacom panel. The top of the pen cap sometimes unscrewed itself, sending tiny metal components to the floor.

And the Yoga Book struggles as a Windows 10 laptop. It takes several seconds to boot up, and apps stuttered or froze up entirely on it more than once during my testing. 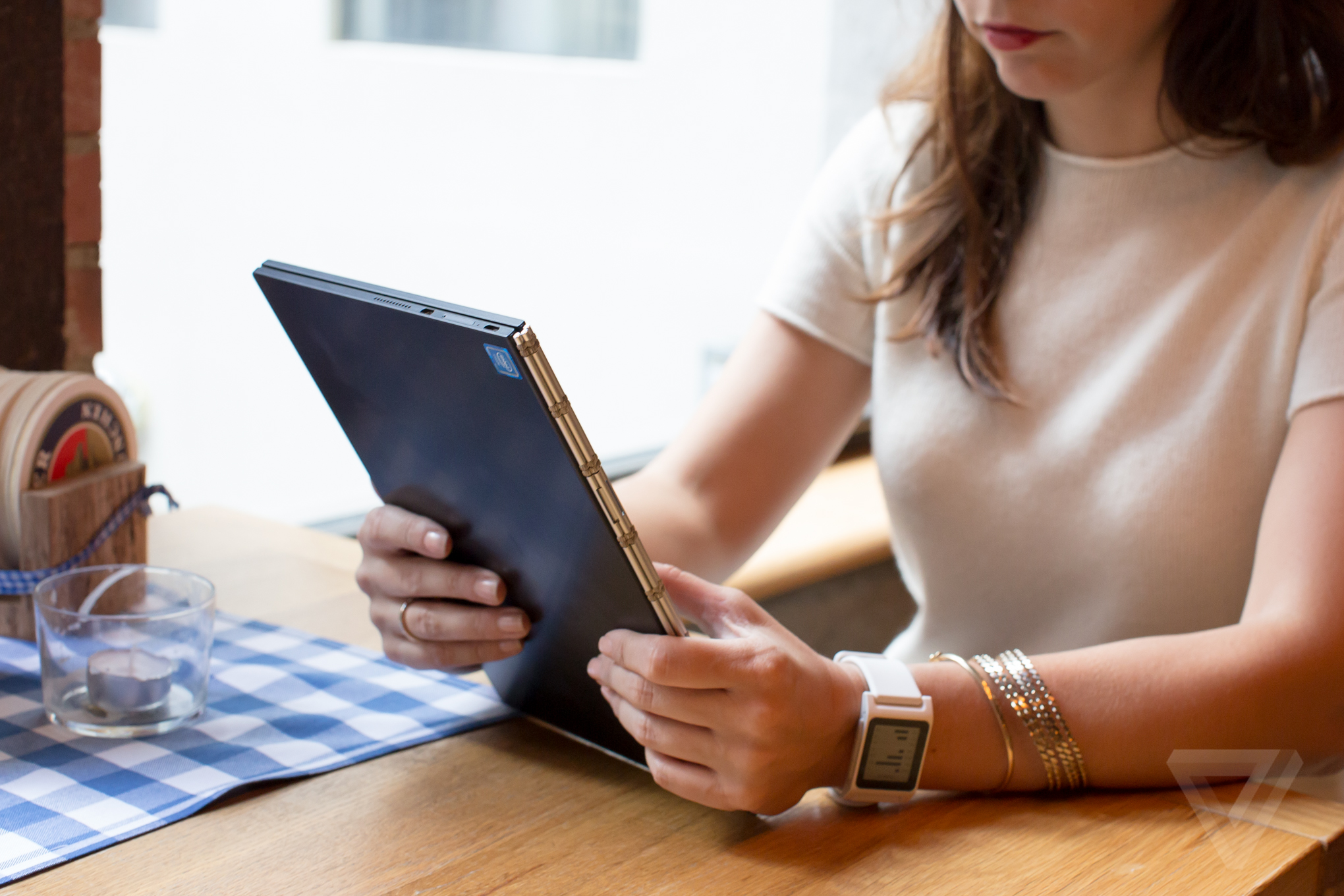 One of the downsides of the Android version, though, is that it doesn’t ship with the latest version of Android, running 6.0 (Marshmallow) instead. Lenovo has thrown its own software layer on top of this to give the mobile OS more of a desktop feel. This includes an app dock at the bottom of the screen, along with multi-window support.

But many popular apps don’t work with the multi-window mode, including Google search, Docs, YouTube, Twitter, Slack, and Kindle. Gmail, Chrome, Netflix, and Evernote do support this, but despite Lenovo’s boasts of 60–70 percent compatibility, it seems that these apps are more exceptions than the norm. 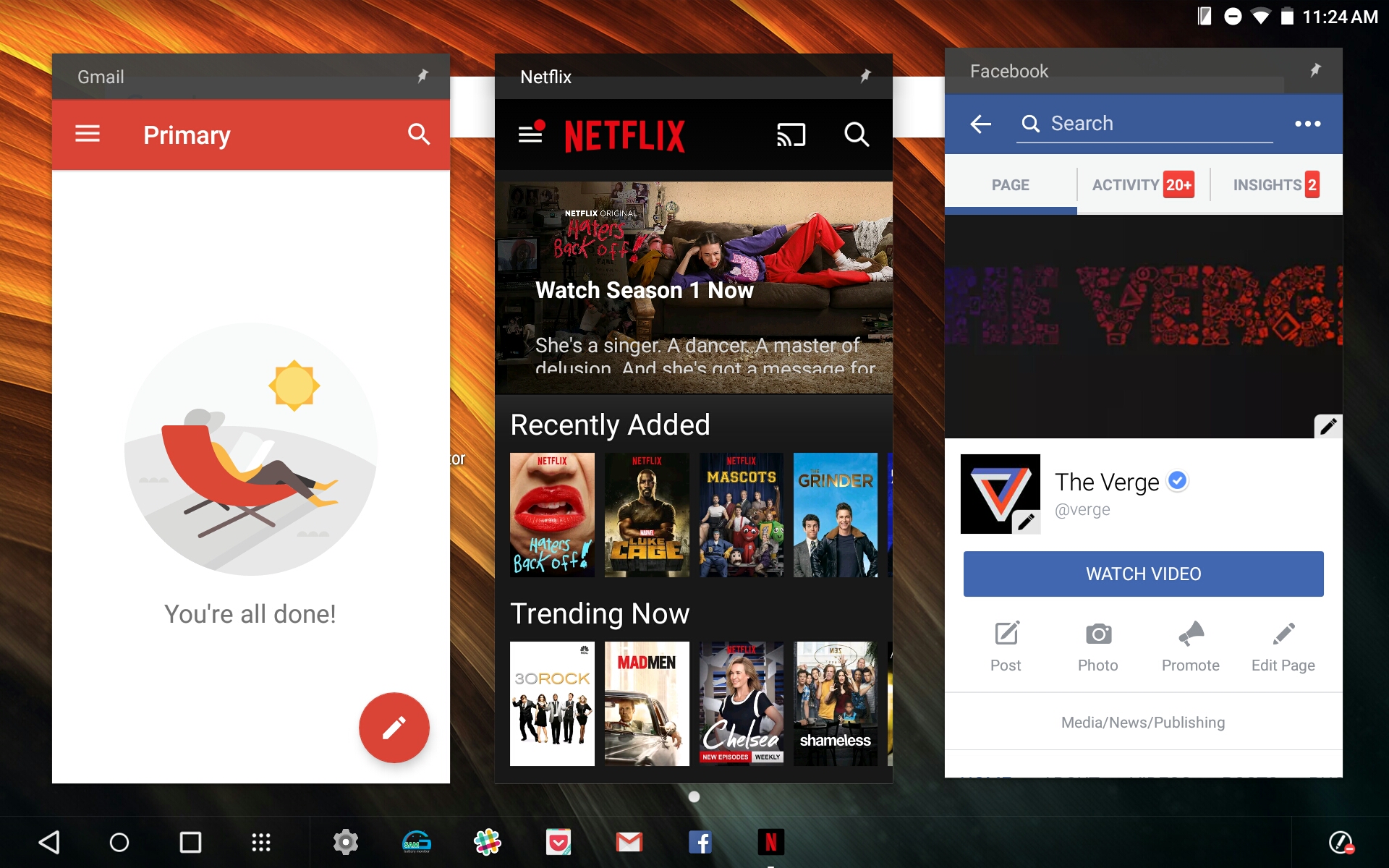 The multi-window feature on the Android version of the Yoga Book.

Even the apps that work in multi-window mode do so in a limited way. They’re narrow, vertical boxes, and you can’t resize them or "snap" them together like you can on Windows 10. Some of the apps, like Netflix, just don’t make sense as a narrow box. And really, I spent most of my time using apps in full-screen mode anyway, which means multitasking on this is still subpar to using a PC with a desktop and windows you can manipulate. The same could be said with an iPad Pro being shoehorned into a PC use case. 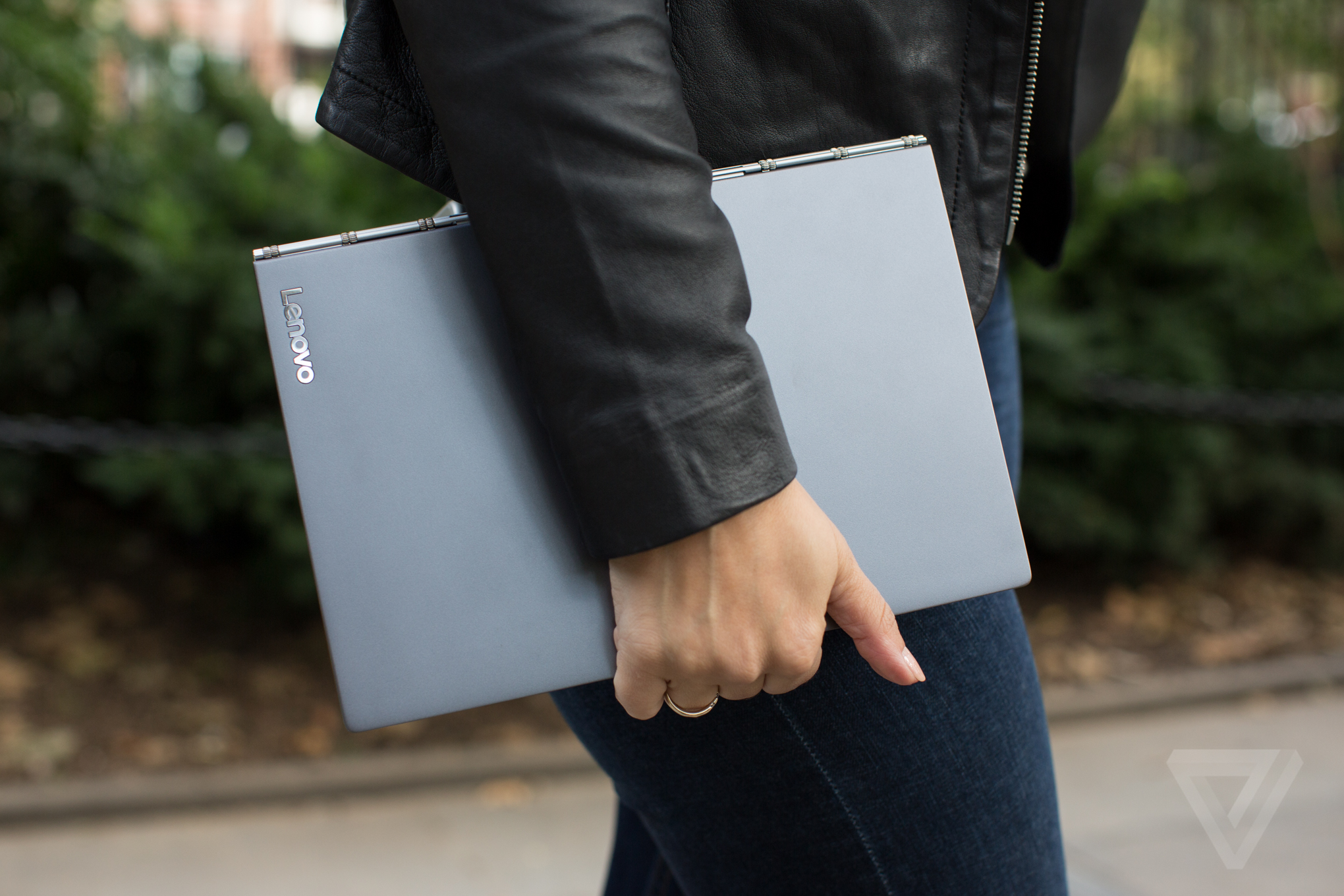 Because of stuff like this, it’s hard to recommend that someone should run out and buy the Lenovo Yoga Book right now. Lenovo has said that it plans to build a family of Yoga Book devices, and this feels very much like the first generation of that. It needs refinement. It needs more intuitive software. Maybe a couple more ports, too, even though that may mean sacrificing thinness.

But the Yoga Book also feels like the more natural evolution of a product category that has been puttering along the past few years, and that’s pretty exciting. Also, have I mentioned how cool it looks?