Inspired by everything from buddy cop movies to model kits

Share All sharing options for: How the team behind Titanfall 2 built a titan you’ll actually care about

Titanfall takes place in a war-torn future, a place where human pilots ride around in giant mech suits called titans to do battle. It’s a grim place, and the titans are seen as powerful weapons, ones that can change the tide of a skirmish almost instantly. The original Titanfall used this setup as the basis for a multiplayer action game, and the sequel is hoping to build on that by adding a proper single-player story. The new campaign puts you in the role of a militia rifleman named Jack Cooper, but what really differentiates Titanfall 2 from its predecessor is his partner, a titan named BT-7274 (BT for short).

Instead of a blank automaton, BT is an actual character who can act on his own and has a distinct personality — sort of a cross between the Iron Giant and the Pixar lamp, only armed with a machine gun and missiles. At the same time, BT’s also a titan, a mech that players can ride around in during battle. This unique duality of the character means that he behaves differently depending on the situation. "His own personality gets sublimated when he’s following the pilot’s will," explains Joel Emslie, art director at Respawn Entertainment. "And then he returns to his own natural personality."

Work on BT started out much the same as it does on every other titan in the game. (Titanfall 2’s multiplayer mode will introduce six new titans, compared to the original game’s roster of three.) First comes the R&D phase: artists and animators play around with both 3D models and practical models made of plastic, while trying to find the basic look for the character. From the very beginning they knew that BT had to be different from the other titans in order to work with the new story mode.

"We took the titans from the first game, and we wanted to make one that emoted well for the player, so you could see what [BT] was feeling," explains Kevin Andersen, a concept artist and modeler at Respawn. "But not be so cutesy like Short Circuit or a Wall-E. It still had to live in this war-torn, futuristic world. That’s where the design process for the main character for Titanfall 2 started for us."

"It still had to live in this war-torn, futuristic world."

To create BT’s personality, the team looked to some surprising places for inspiration. In Titanfall’s fiction, human pilots and robotic titans become partners and form deep, lasting connections. At the outset of Titanfall 2, BT has just lost his human partner, and you’re the new guy taking his spot. To create this dynamic, the team at Respawn looked at a number of buddy cop movies from the 1980s; think Lethal Weapon or Beverly Hills Cop. But it was tough to find the right balance between making BT a lovable partner and 20-foot-tall war machine. "Early on he was either like a little puppy dog that would follow you around, or he came off like a dick," explains Emslie. "When we got to this point where people started not liking him we knew we went too far."

All told, it took around seven months of work by a team of five to get the balance right. Elements were added to BT that allowed him to seem more human. He has a large emotive eye that lets you know exactly where he’s looking, as well as an additional pair of smaller robotic arms on his back that make it easier to interact with people. When he hears something, he’ll turn his head quizzically like a dog in the direction the sound came from. "As soon as you disembark, you get to see all of these little gestures and mannerisms," says animator Shawn Wilson. For instance, when you’re piloting BT he’s right-handed, but when he’s acting of his own will he switches back to his left hand. 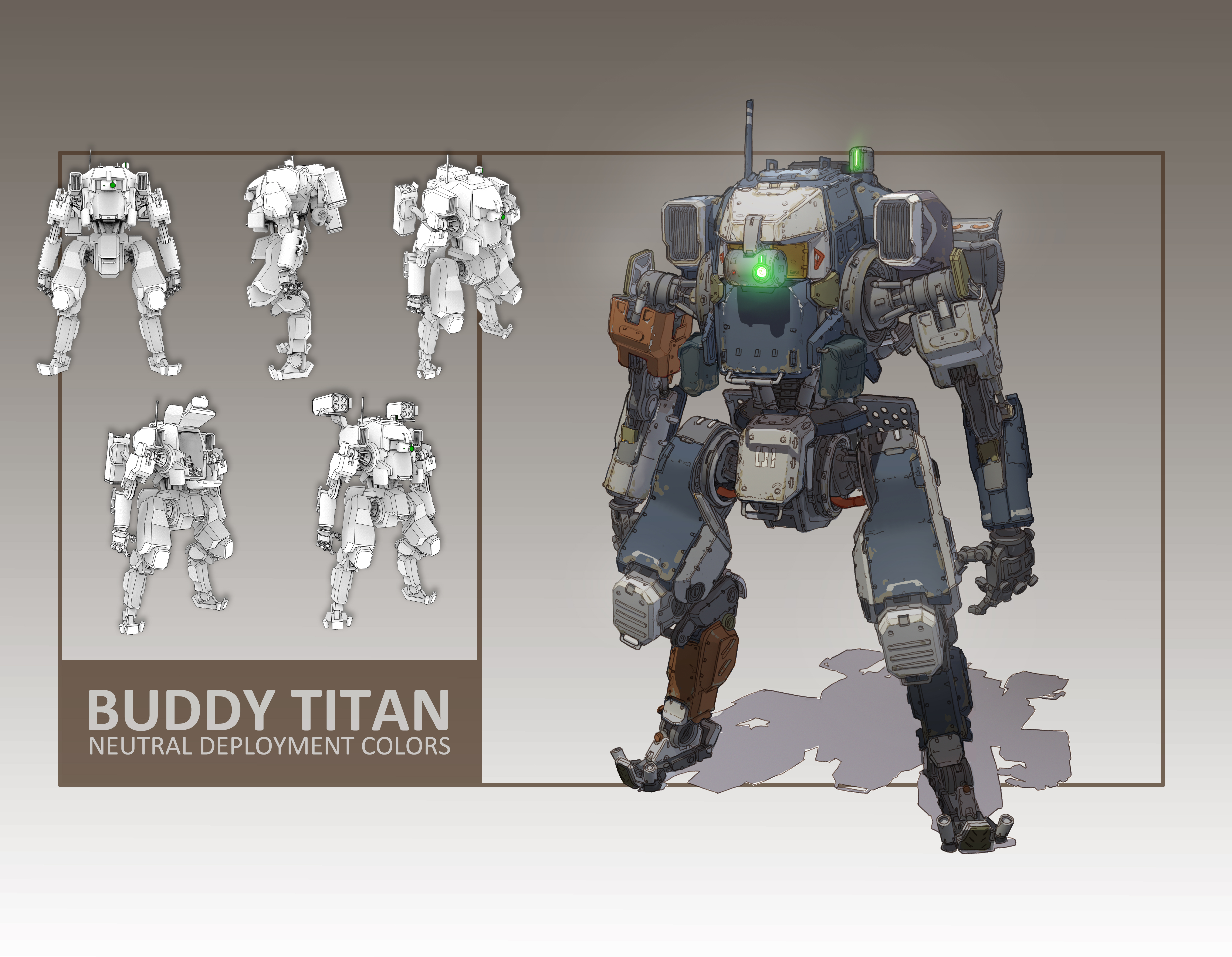 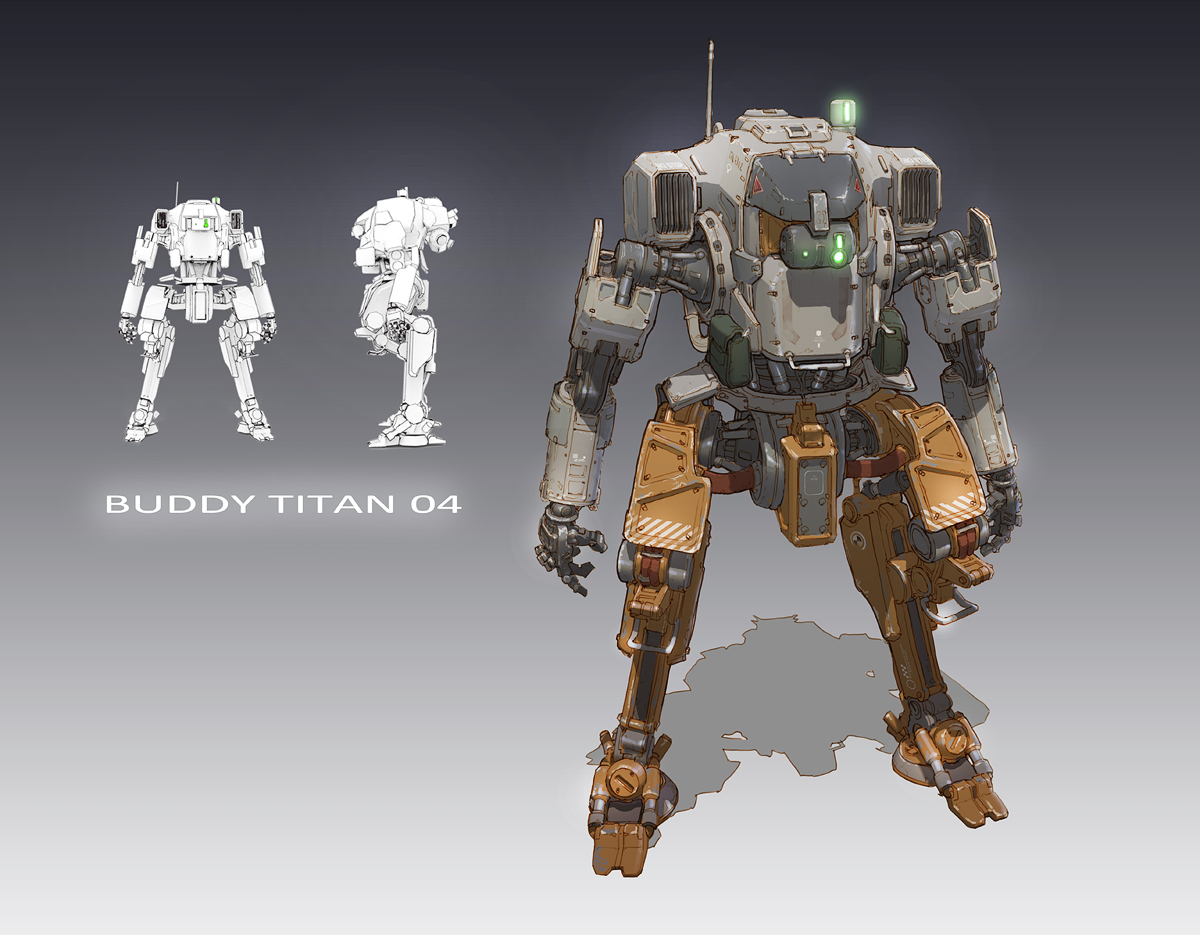 Film was a big inspiration for other aspects of the character as well. BT not only had to act differently from the other, more static titans, he also had to look different. When you’re in the midst of a hectic battle filled with other soldiers, mechs, and explosions, you need to be able to spot your partner right away. Creating a defined silhouette was a key priority. For this the team looked at Akira Kurosawa samurai films and old spaghetti Westerns. In those movies, when a Clint Eastwood-type gunslinger strolled into town, you could tell who he was just from his silhouette. Respawn wanted that for BT.

"It was very important to ensure that even if you put BT up against a frosted glass window and could just see his silhouette like a shadow puppet, that his silhouette had to completely stand out against all of the other titans," explains Emslie. "That way when you’re in a really bad situation as a player and you’re not with him, you can easily tell where he is and find him in a crowd." In addition to having a defined silhouette, BT was also designed so that his back is a brighter color than the front, so you can easily tell if he’s facing you — a useful feature if you need to get in the cockpit in a hurry. 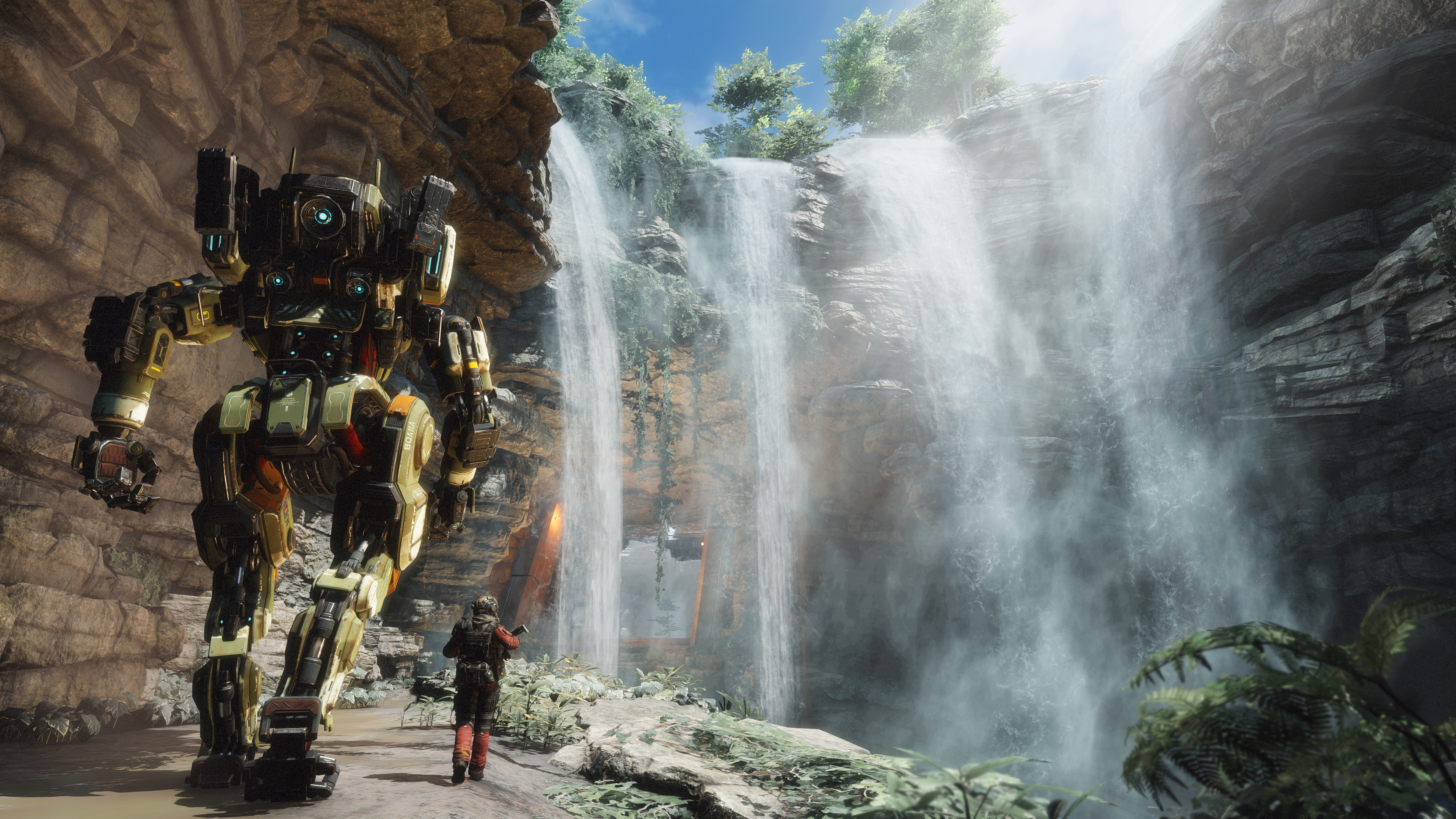 From this base the team continued to build on the BT concept with more details. A giant talking robot could easily turn into something silly and out of place in a game about war, and so BT’s design is grounded in more realistic elements to make the character more believable. Like the rest of the Titanfall universe, his look pulls heavily from modern-day military technology. BT’s angular body, for instance, was inspired by the Apache helicopter. Meanwhile, many of the other smaller details were put in place to give a better sense of scale. BT’s body is dotted with handles and ladders, so that no matter what angle you’re looking at, you can tell he’s a massive machine.

"You can kind of tell that this dude is pretty big."

"When you have a 20-foot-tall titan, depending on your view things can get toned down, and change the effect of the scale," says Emslie. "So putting some contemporary military details into the design also serves a purpose, in helping to visually tell the story of its scale. You can see there’s a ladder on his leg, so you can kind of tell that this dude is pretty big." (In order to ensure that those small details were where they should be and accessible to an actual human character, the team tested things out by dragging a disembodied human hand around a virtual 3D model of the character.)

Elements of the design were changed based on the needs of the game — for example, BT has multiple battery packs because of a particular story moment — while others were added for more personal reasons. The tiny arms on BT’s back were originally put in place because of one of Anderson’s hobbies. "I’m a real enthusiast for model kits, and I thought that if somebody pays a lot of money for the toy of this, he should hold all of the parts," he says of the reasoning behind the extra arms. "When you’re a kid, you lose the extra parts if you don’t have them on there." The arms ended up being a key part of the character, and were so useful that they were later added to other titans as well.

But even with all of this attention to detail, it wasn’t until months into the design process that BT really felt like a proper character. He had a defined look, and he could emote in a believable way, but something was missing. "We were working on BT, but we didn’t have a voice actor at the time," explains Wilson. "We were just spitballing it. I think when we did get [the voice] in-game, that’s when it all came together. Then the personality started to shine."

BT is just one part of a much larger experience, but he’s also the prime example of how Titanfall 2 is trying to be different than its predecessor. Whereas the original was a multiplayer shooter where you could pilot mechs, the sequel is looking to build on that, fleshing out the sci-fi universe with a real story and turning titans from disposable machines into integral parts of the universe. And for Emslie, the art and design of a character like BT are key to getting those points across.

"It’s our job in the art department — not only with the characters, but with everything — to ensure that every pixel and polygon explains and legitimizes what’s happening on-screen."

How an online community took back the Legend of Zelda