More fallout from the Facebook board member's $1.25 million donation to Trump

Peter Thiel's donation of $1.25 million to Donald Trump's presidential campaign continues to rattle Silicon Valley. A day after a nonprofit stopped working with startup incubator Y Combinator for keeping Thiel on as a part-time partner, Mark Zuckerberg defended Thiel's status as a Facebook board member in a message to employees. "We can't create a culture that says it cares about diversity and then excludes almost half the country because they back a political candidate," Zuckerberg wrote. "There are many reasons a person might support Trump that do not involve racism, sexism, xenophobia, or accepting sexual assault."

A screenshot of the memo was posted to Hacker News yesterday, and it later surfaced on Boing Boing. A Facebook spokesman confirmed the authenticity of the five-paragraph memo to The Verge. It appears to have been posted on Facebook for Work, the enterprise version of Facebook that the company recently made available to other companies. 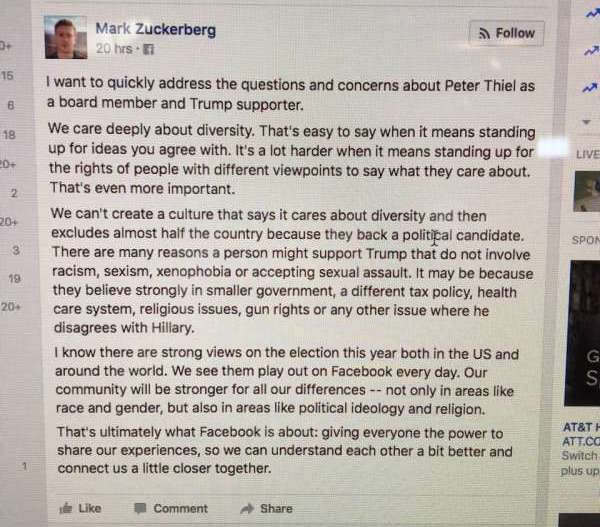 Thiel has been a central figure in Silicon Valley since his days as a co-founder of PayPal. He later co-founded data analysis company Palantir and was one of the first outside investors in Facebook. His ties to Y Combinator, the valley's most successful startup incubator, have placed him close to some of the largest companies of the current generation.

Thiel's support for Trump has confounded an industry that has has been working to improve the gender and racial diversity of its workforce. Many of its most prominent CEOs are active in liberal causes and have donated to Hillary Clinton and other Democrats.

Thiel's endorsement of Trump has put those CEOs in a difficult position. On one hand he is a close adviser; on the other, his support for an erratic, racist demagogue has outraged many of their employees and partners. Like Y Combinator's Sam Altman before him, Zuckerberg defended the company's ties to Thiel by saying that the company has a moral obligation to consider a variety of viewpoints, no matter how abhorrent. "We care deeply about diversity," Zuckerberg wrote. "That's easy to do when it means standing up for ideas you agree with. It's a lot harder when it means standing up for the rights of people with different viewpoints to say what they care about. That's even more important."

Of course, as the designer Jason Putorti wrote on Medium this week, Thiel already has an outsized capacity to stand up for ideas he agrees with: he spent $1.25 million to promote them. Zuckerberg's memo reads as if he is defending Thiel's right to post on Facebook. In fact, the question is whether someone who promotes opposition to gender and racial equality should be allowed to serve as a steward for a company whose stated mission is to connect the world.

Tech CEOs "are being insensitive to is the fact that for many people, myself included, wrapping Donald Trump in the blanket of 'a major party nominee' is normalizing his behavior," Putorti wrote. "So because Mr. Trump is a major party nominee, normalizing rape culture and referring to it as 'locker room talk' is treated as normal political speech." He continued: "The lack of understanding of life experiences that, as privileged white men, they haven't had, reinforces one of the uglier stereotypes of Silicon Valley. Not taking a stronger stand allows this culture to continue to permeate this community."

Calls for Thiel to leave the board first appeared earlier this year, when at a time that Facebook's impartiality in serving as a conduit for news was being questioned, he and Hulk Hogan successfully sued Gawker out of existence. At the time it seemed clear that those calls would be renewed each time Thiel intervened in public affairs. Zuckerberg's memo may or may not quell employee dissatisfaction with the company's Thiel association — but it will remain a public-relations problem for the company as long as he's around.