By Bryan Bishop and Nick Statt

Earlier this year we started a weekly column called "The Walking Dead Quitter’s Club." The premise was straightforward: TWD has shown itself to be a program that enjoys manipulating its audiences with a tremendous amount of cynicism, to the point where viewers might wonder why they were watching in the first place.

Some episodes bumped our likelihood of quitting higher, others brought it lower. But throughout it all, there was an unstated rule in our thinking: there could come an episode that would finally push too far, and mistreat its audience to such a degree that The Walking Dead Quitter’s Club would actually quit.

Bryan Bishop: It’s been easy to look the other way while The Walking Dead has indulged in its crueler, more vulgar tendencies. From the beginning, the series was able to mash up violent zombie deaths with legitimate character development — particularly in its first few years — and the quality of the drama and emotional engagement made it a fascinating horror hybrid. But that balance became less nuanced when showrunner Scott Gimple took the helm. And it turned outright problematic last season when the show seemed to eschew true character or narrative developments in lieu of tawdry manipulation. Whether it was faking Glenn’s death, dropping Polaroids of bashed-in heads into shots to tease comics fans, or the seemingly endless almost-reveals of new bad guy Negan, The Walking Dead seemed more about hyping itself than about telling a story.

It was all building up to last night’s season premiere, when Negan and his baseball bat Lucille went after the show’s heroes. Abraham died. Glenn died. The episode added cheap tension by leading the audience to believe that Rick would cut off his son’s arm. It was horrifically violent. It was cruel. And the show had the audacity to slap on some cello score and a "what could have been" fantasy sequence to make sure the audience was manipulated as much as possible.

This wasn’t quality television, and it wasn’t suspenseful drama. It was torture-porn masquerading as storytelling, and AMC should be ashamed for airing it.

Nick Statt: In the age of Game of Thrones and near-photorealistic video games, it can come off as old-fashioned to complain about violence on television. But TWD’s premiere last night pushed the limits of good taste and storytelling far beyond its capacity, all in the service of making it up to fans who felt betrayed by last season’s finale. More than anything, this episode proves just how hollow the show has become. It sets up what may inevitably be its final arc with depictions of human brains splayed out on the ground. This is what Gimple and crew thinks their viewers want — that, or they’ve decided that the show needed this level of cheap theatrics to retain its audience this late in the show’s lifespan.

The episode shows just how hollow the show has become

It was at times hard to watch the cast act these scenes out. Whether it was Andrew Lincoln slobbering all over himself in an attempt to convey Rick’s feeling of helplessness, or Lauren Cohan contorting her face into yet another expression of anguish to show Maggie’s devastation, it all felt grotesque. Don’t even get me started on Glenn’s final words, uttered as his eye was falling out of its socket.

These kinds of tactics work in the context of standalone horror films, but TWD isn’t Saw or Hostel. It’s a television show in its seventh season. It’s taken years, but it’s ultimately devolved into exemplifying its worst qualities. I suppose the question now is whether it could have been saved. 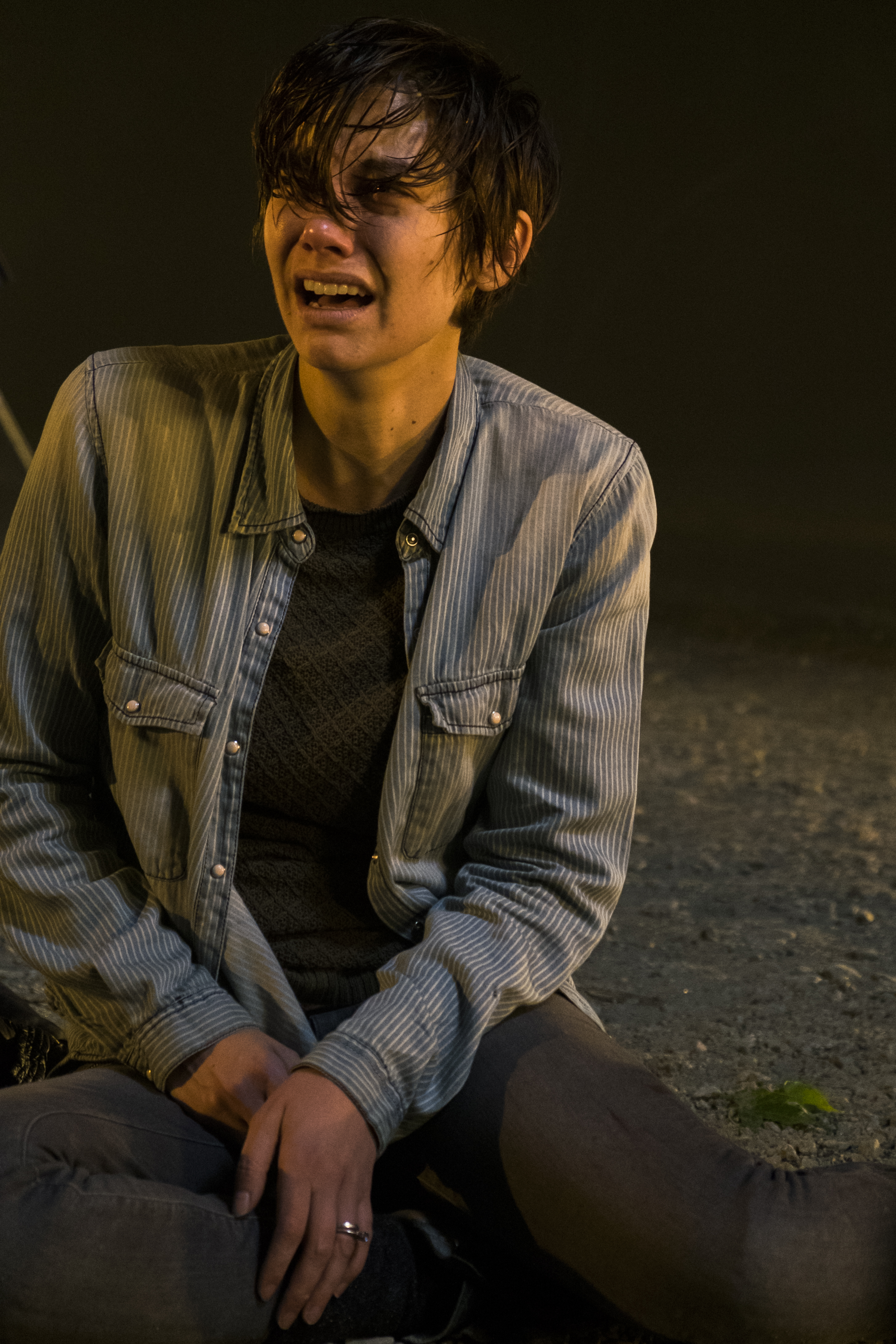 Bryan: It certainly could have been. A new season is always an opportunity to reconsider and recalibrate. But last night’s episode was no accident, and I don’t believe it was meant to be a corrective to last season’s finale, either. If anything, it seemed cut from the very same cloth; another example of the manipulative tendencies and casual disregard for its viewers that the show has been exhibiting for a few years now.

Gimple and his team dragged out last season with Negan teases because they couldn’t be bothered with telling a story that actually propelled itself. They relied on gimmicks. The same goes for the pacing of last night’s episode. They didn’t reveal who actually died until more than 20 minutes into the broadcast. And then even Abraham's death was a fake-out, as Glenn was murdered in the harshest way possible five minutes later.

That is orchestrated cynicism, pure and simple, forcing the audience to wait until the show was safely past its second commercial break before answering the question it left everyone asking. At a certain point, you have to sit back and realize what you’re watching is not satisfying storytelling — it’s manipulation.

Nick: The Abraham fake-out actually had me tricked. TWD expected a "who cares" attitude when he died, and it got it from me, before the real shock, when Negan struck Glenn. Of course, the gotcha element wouldn’t have come off as such a poor parlor trick if it wasn’t literally sacrificing a less-popular character just to heighten the blow of losing the one cast member who gave the narrative any kind of moral fiber. And that’s why, as you say, the manipulation and contempt for viewers is TWD’s biggest sin. There’s no getting away from that.

Contempt for its viewers is The Walking Dead's greatest sin

I can already hear the show’s defenders, and they are certainly out there by the millions, in spite of the way TWD treats its audience. It’s easy to say this is just a silly zombie show, and that gore and cheap deaths have always been a part of its DNA. That is true. But it used to have stellar moments of strong character development — as late as last season, even. (Remember Carol?) We used to get genuine explorations of human struggle and reinvention set against the post-apocalyptic setting. Now we have a revenge train beat into us with a barbed-wire baseball bat, and shallow characters destined to die.

It’s also hard to buy that TWD doesn’t take itself seriously, when it has grief-filled postmortem goodbyes for offed cast members and dramatic previews playing up its drama. This premiere was even screened for an audience at a cemetery in Hollywood last night. People actually sat on blankets and watched this, as if this was an entertainment moment viewers would cherish and look back on fondly. It would be one thing if AMC employed some self-awareness and went all-in on turning its property into the type of campy TV that knows it’ll never be highbrow. Instead, we have a show that pretends it’s artful and bold. TWD is neither.

Bryan: There’s something about the glibness of the Hollywood Forever cemetery screening — and the baseball-bat emoji that Twitter rolled out — that's really offensive when viewed in light of the events this episode depicts, and how it depicts them.

Off the top, let me be clear: killing off characters on a show like this is fair game, and I have no general problems with horror, gore, or on-screen violence, either. (I’m the guy that steps up to defend the aesthetics of Hostel 2 when others won’t touch it.) But context is everything, and in this episode, Glenn is hit by a baseball bat so hard that his eye pops out. Then the camera lingers on his face as he struggles to recover, muttering to Maggie, until he is put out of his misery.

This is on showrunner Scott Gimple — but it's also on AMC

There’s no question that there’s been plenty of blood and gore in The Walking Dead overall. But this is a show that, whether intentionally or not, has been utterly cartoonish in its depictions of violence. It’s a show where the copious sprays of blood are so obviously computer-generated that it almost seems like they’re downplaying the viscera on purpose. Given that history, the shots of Glenn’s murder were outrageously grotesque, and utterly out of character. It’s hard to not see it as just another example of torturing the audience to get a cheap reaction — Hey, let’s tear apart the face of one of our most beloved characters! — instead of earning the moment through sheer storytelling prowess.

The obscenity of it all is that the show had all the tools it needed to create a truly emotional moment at its disposal. Glenn dying is awful unto itself. The thought of Glenn never seeing his unborn child is gut-wrenching. Watching Lauren Cohan’s Maggie fall apart is harrowing. That’s what audiences should have walked away from the episode thinking about. Instead, I’m fixated on the perverse makeup effect. That’s a failure, and while it’s on Greg Nicotero, the visual-effects maven who became one of TWD’s go-to directors under Gimple’s watch, it’s also on AMC. As Entertainment Weekly’s James Hibberd pointed out on Twitter, the same network that feels the need to bleep our curse words felt just fine airing these visuals. That alone is a reason to reconsider watching the show.

Also: That @TheWalkingDead censors Negan swearing & won’t show nudity, but airs THAT feels like perf example of upside down puritanism

Nick: The beatings were certainly some of the most upsetting visuals I’ve ever put myself through on a cable television show. It feels as if a line was crossed, and not a line based on graphic content alone. If the show is willing to go this far to wring out emotional reactions from its audience, where does it end? I was half-expecting pregnant Maggie to be killed as well, or to actually have to watch a sobbing father sink an axe into his son’s forearm. That’s TWD’s biggest problem going forward. We’re supposed to hate Negan now, and the reason people should want to keep watching is to see what type of revenge Rick strikes back with, no matter how many seasons it takes. But no amount of payoff is worth being jerked around like this.

Respect your emotional energy and just say "no"

The point I’m making here is that if there were ever any time to say no — to exercise your will as a consumer and to respect your time and emotional energy — that time is now. We spent last season here at The Walking Dead Quitter’s Club warming up to the show after its meandering, murky post-Governor story arcs. Then we gave Gimple and crew the benefit of the doubt after last season’s gutless finale. Instead of delivering last night, the show smashed heads and called it tension-filled drama. Sometimes you have to walk away from a show when it’s changed for the worse, and at this point, The Walking Dead exists solely to experiment with increasingly ridiculous ways to make people care. Realizing we don’t care — and, in fact, haven’t for some time — is a blessing in disguise.

Bryan: I couldn’t agree more, Nick. Last night we watched a sociopathic exhibition of brutality, all in a blatant attempt to elicit cries of fealty and submission. But the perpetrator wasn’t Negan. It was The Walking Dead.

The Quitter’s Club is closed.

Our Quitting Likelihood after "The Day Will Come When You Won’t Be":