Roku and Chromecast come with 4K now, but you don't need them yet

It’s the holiday season, which means millions of people are leaving stores with a new 4K Ultra HD TV. Google and Roku are hoping that they’ll also tack something else onto that big purchase: a streaming gadget. Both companies have recently released products that can play stunning 4K (and HDR) videos from popular streaming services.

In the case of Roku, you’ve actually got several new devices to choose from, led by the top-of-the-line $130 Roku Ultra. And Google has expanded the Chromecast lineup with the introduction of its first model to support 4K: the $70 Chromecast Ultra. In 2016, we can finally say that there’s a decent amount of 4K stuff to stream, too. But that doesn’t make either of these an automatic purchase. You might be just fine sticking with the apps that are bundled with your shiny new 4K TV. Even if they’re not essential, Google and Roku have each made products that will appeal to a lot of people, so it’s worth taking a close look at what you get (and lose) with that leap up to 4K and the higher prices that come with it.

The Roku Ultra is a smaller, fanless version of 2015’s Roku 4, which launched the company’s move into 4K. On top is a remote finder button, which you can press to make the Roku remote emit a sound for easier recovery from the couch cushions or wherever it’s hiding. This simple convenience is exclusive to the top-tier streaming box this year, which seems a little silly. Where the Roku "Ultra" truly earns its name is in ports: you’ve got Ethernet, optical audio, microSD, USB, and power inputs. The USB and optical audio ports are exclusive to the Ultra, and both are fairly valuable to home theater nerds. The step-down Roku Premiere+ lets you slot in a microSD card and play your own movies, music, and images with third-party apps like Plex. Here, the USB port expands that potential substantially. Plug in a drive with a vault of your own downloaded or ripped media, and you won’t need to worry about Wi-Fi speeds or buffering. 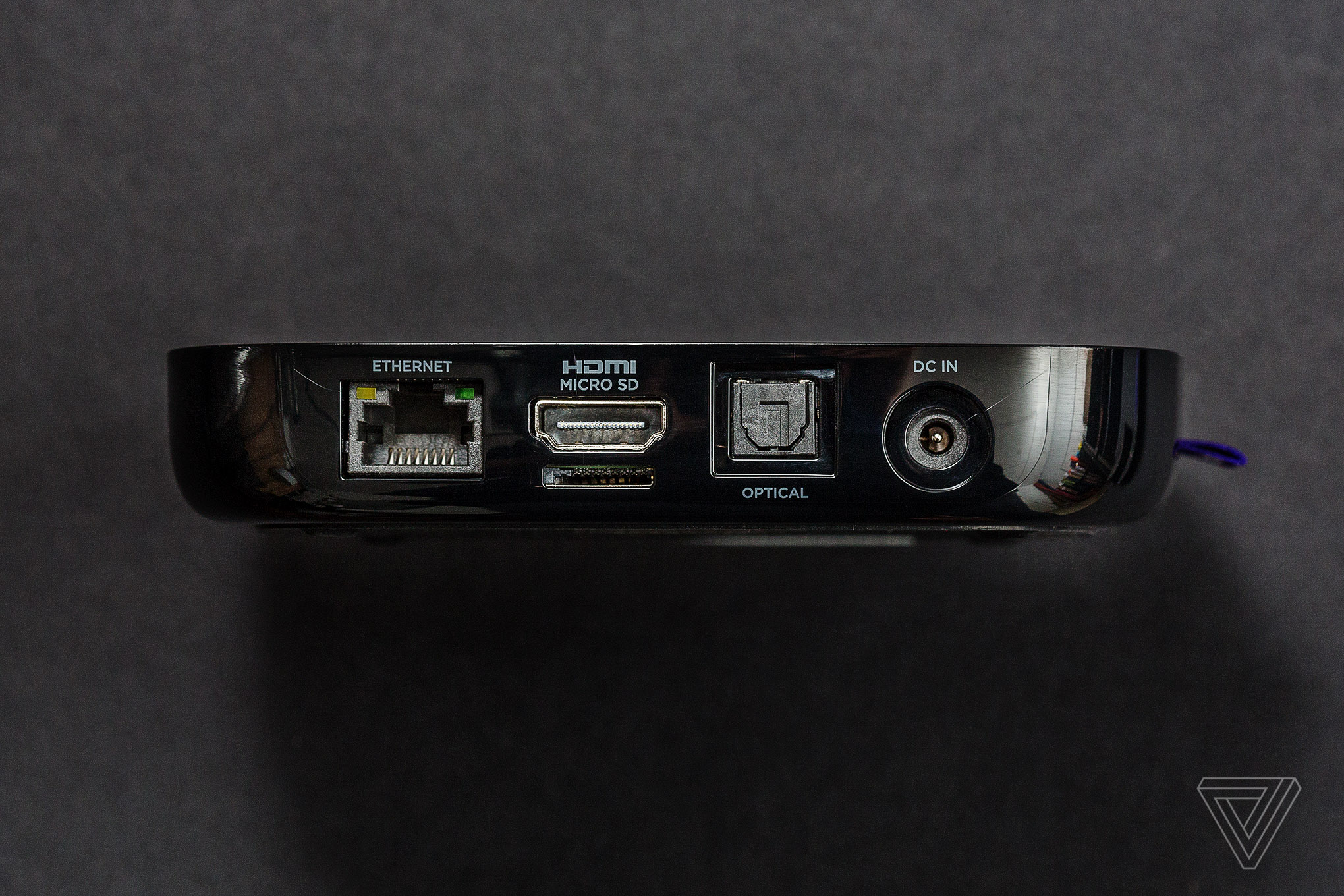 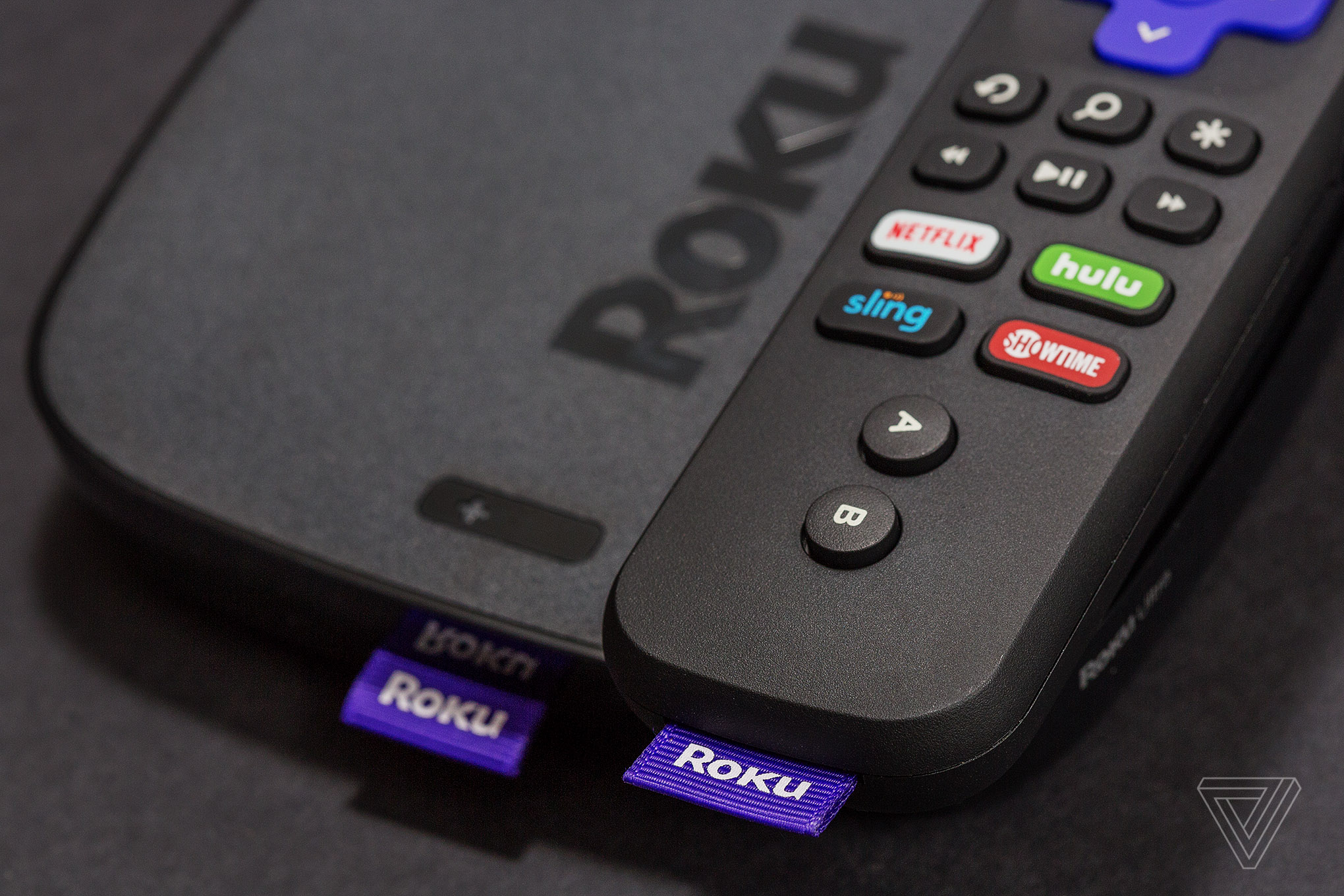 The Chromecast Ultra goes the opposite way and is a slightly larger and thicker update to last year’s redesign. A glossy (look at those scratches!) black puck containing the device’s processor and other guts hangs down from the HDMI connector; the two attach magnetically when unplugged for easy storage. This take on the HDMI dongle is far more convenient to plug into your TV than the original, unforgiving plastic stick.

What’s less convenient is the enormous (relative to the Chromecast’s size) power supply. It’s a big, honking thing that’s mandatory to use if you want to stream 4K content. Previous Chromecasts could be powered entirely with a cable plugged into a USB port on your TV, making the device all but disappear behind your set. That’s still partially the case this time, but the Ultra automatically limits you to 1080p streaming if you’re plugging in anything besides the bundled power supply. You’ll need to find yet another free outlet near the TV if you want 4K, which is the whole point of this thing. The power cable is a little short, too, but it does offer one nice perk: a built-in Ethernet jack. If your Wi-Fi is the worst and can’t reliably stream 4K video, you can go the wired route instead.

It’s when you turn these devices on that the user experience starts to wildly splinter. Roku’s dead simple interface has gradually picked up some new features over the years, but it’s still the same purple-heavy layout you’ve likely seen before. Most people will rarely go beyond the list of apps on the home screen once they’ve downloaded popular channels like Netflix, Amazon Instant Video, Hulu, YouTube, and Vudu. And there are a lot of channels to pick from. Some are less intuitive and less polished than others, but Roku’s platform is all about quantity and choice. Unfortunately, the OS still lacks any sort of single sign-on feature for TV apps, so you’ll need to enter your cable credentials inside every app (HBO Go, WatchESPN, etc.) that requires them.

Roku’s physical remote keeps the simplicity approach going, and the headphone jack for private listening remains one of my favorite Roku features. But I wish the company would make the remote’s shortcut buttons customizable. On the Ultra, they’re reserved for Netflix, Hulu, Sling TV, and Showtime. The latter three of those services don’t even offer 4K or HDR content, so Roku really should’ve given those slots to YouTube, Amazon Video, and Vudu — all companies that do.

There’s at least a 4K Showcase section that helps highlight all the sharp, vibrant videos you might not’ve watched yet. Roku’s universal search, which looks across all the big services for any movie or show you want to watch, is another huge help for content discovery. But these software features are also available with the less expensive $79 Premiere and $100 Premiere+. Both also stream 4K, though only the Premiere+ and Ultra can do HDR. For its part, 4K HDR video on the Ultra device I reviewed looked phenomenal. It’s not as flawless as Ultra HD Blu-ray discs, no, but the intro sequence of Amazon’s The Grand Tour left many people at The Verge’s New York office completely floored. Video is rather pixelated when you first hit play, as it takes several seconds for videos to switch over to 4K resolution, but I rarely encountered buffering or interruptions in anything I watched — though I tested over Ethernet.

A $70 streaming gadget should have menus and an interface

With Chromecast Ultra’s software, you’re largely left on your own. Google’s dongle is still using the same no frills, control-it-from-your-smartphone approach that made the original model stand out and feel so different. There’s still barely any user interface to speak of on the TV itself, and on a $70 product, that actually starts to get pretty annoying. You set up the Chromecast using the Google Home app on your phone. Open any Cast-compatible app, hit the Cast icon, and the Chromecast loads up that content on the big screen, freeing up your phone for other things. Casting mostly works reliably and quickly — especially compared to the original Chromecast — but there are still times when it’ll lose connection to my phone and things go unresponsive, requiring you to reload whatever app is controlling what’s on-screen. For a bargain $35 streamer like the 1080p Chromecast, that’s acceptable. But for the Ultra’s price, not so much.

Google can point you to all the apps that support Chromecast, but actually tracking down 4K shows and movies is, again, up to you. That might be okay if not for one huge problem: Amazon Video, one of the biggest sources of 4K and HDR content, doesn’t work with Chromecast. That’s a pretty significant loss, and means you’ll need to turn to Vudu, Netflix, and YouTube for a relatively thin (but growing) collection of 4K and HDR viewing options. Like with the Roku, the Chromecast Ultra takes a few seconds to jump up to 4K quality once you’ve hit play. But videos look sharp, saturated, and terrific once they do. Beyond just streaming, Chromecast also does some unique things like mirroring an Android phone or Chrome on your PC to the TV screen. When nothing’s playing, you can set the device to display news, the weather, or photos from Google Photos, Facebook, or Flickr. But it’s still nothing close to the traditional on-screen interface you get from the Roku.

But do you even need either of these? Almost every 4K TV sold today has apps of its own, and they likely cover most of your needs. If your 4K set comes with Netflix, Amazon, and YouTube out of the box and they all stream in UHD, I really can’t see much reason for spending extra on either of these devices. It’s not like you can load up Sling TV, HBO Go, or WatchESPN in 4K; many, many apps haven’t made the upgrade and are still limited to 1080p. (The Chromecast Ultra is the first Chromecast that can play YouTube at 60fps, if you care about that nerdy tidbit.) Looking into the future, Roku's apps — and definitely those on your phone — will be updated more often and do a better job of keeping current than any Smart TV app. But if all you care about is watching Stranger Things or Transparent in 4K, that might not matter. If your TV doesn't have 4K apps built-in, then I'd recommend getting the Roku Premiere+ or Ultra over the Chromecast. Google and Amazon really need to work out their issues.

You also need to make sure your TV is compatible with whichever one you get — and this can come down to individual ports. Only one HDMI input on the brand-new Vizio M-Series I plugged the Roku into supports HDCP 2.2. With the others, 4K video playback was blocked and the Roku displayed a really unpleasant (and incomprehensible to your average consumer) error message about HDCP incompatibility. There were no "try another HDMI port" instructions — just a link to some support page.

Would I buy either of these? Not for TVs that can competently stream 4K on their own. The natural upgrade from there would be a 4K Blu-ray player (or the $299 Xbox One S, which also does 4K apps). But here, you’re just adding streaming on top of streaming. Some people will definitely find value in the huge number of apps available with Roku, or they might prefer the phone-does-everything approach of Chromecast. And if your TV's apps are miserable to use, then plugging in one of these can definitely lessen the pain. But the inexpensive appeal has vanished, and you can probably leave the store without them.

$99.00 at Amazon$99.99 at Best Buy
Most Popular
From our sponsor
Advertiser Content From