Don’t worry, it’s completely safe to read this one

Share All sharing options for: Rogue One: our spoiler-free Star Wars review

When Disney bought Lucasfilm back in 2012, the studio made it clear that it wanted to get the most out of the $4.05 billion it was paying. Not only would there be a new trilogy of Star Wars films, but the studio also wanted a series of spinoffs: films that took place inside George Lucas’ galaxy far, far away, but didn’t necessarily track the ongoing domestic squabbles of the Skywalker family. Essentially, the move was to Marvel-ize Star Wars, expanding one of the richest and most beloved properties in history to tell a never-ending stream of stories across all genres and forms of media.

Last year, J.J. Abrams’ The Force Awakens did its job, restoring the franchise to its position as an almighty cinematic behemoth. This weekend, it’s time for round two, with Gareth Edwards’ Rogue One: A Star Wars Story hitting theaters.

A proof of concept for the expanded cinematic universe, Rogue One jumps back in time before 1977’s A New Hope, telling the story of a group of Rebels who hope to track down the plans for the original Death Star before it can lay waste to the galaxy. But it also has the unique challenge of defining a new kind of Star Wars movie, one that shares aesthetics and history with the originals, while simultaneously starting almost from scratch with its own characters, tone, and stylistic conventions. Audiences have been experiencing ancillary Star Wars stories in books, TV, and games for decades, but this is something new: a Star Wars movie that’s fundamentally separate from the film franchise we’ve always known.

As I did with my review of The Force Awakens last year, I’m going to set one ground rule here: this review will not have any plot spoilers whatsoever. The only story specifics I’ll touch upon are the ones in the trailer above, because yet again, Disney and Lucasfilm have done a remarkable job of promoting a Star Wars film without letting audiences know even a sliver of what’s actually going to happen. If the original Star Wars was a nostalgic throwback to the era of sci-fi serials, thus far Nouveau Star Wars has been a nostalgic throwback to the era of seeing movies without trailers spoiling everything, and my advice with Rogue One is to go in knowing as few plot details as possible.

But you’ll have to pay attention. The movie moves quickly, and Rogue One throws a lot at its audience in the first hour without much beyond sheer momentum to hold things together. Unlike a traditional Star Wars sequel (or prequel), Rogue One has to build itself — and establish its characters — from the ground up, and the film occasionally struggles with the workload. Breaking from the hero’s-journey convention that powered the original Star Wars trilogy is part of what makes the idea of a standalone movie so compelling, but at times, the film doesn’t entirely know where to place its emphasis. It’s torn between the Empire’s nefarious actions, the Rebellion’s politics, and the gradual coming together of Jyn Erso (Felicity Jones) and her ragtag group of freedom fighters.

When Star Wars films are at their best, the characters themselves provide the strongest throughline, and the magic trick J.J. Abrams and co-writer Lawrence Kasdan pulled off with The Force Awakens was creating characters like Rey and BB-8, who almost instantly became part of our larger cultural consciousness. Rogue One has its share of real standouts — Alan Tudyk is the unquestionable comedic highlight as a wisecracking, former Imperial droid named K-2SO, and Hong Kong action star Donnie Yen (Ip Man) is unforgettable as a blind monk with incredible fighting skills and heartbreaking humility to the will of The Force. But by the end of the movie, many characters still feel thin and undefined, perhaps given a single attribute to highlight in a specific scene, but otherwise lacking enough personality to prevent them from fading into the background alongside the other meticulously designed and costumed characters.

The screwball banter from characters like Han Solo and Princess Leia — or Rey and Finn, for that matter — is so essential to what we think of as “Star Wars,” so it’s hard not to feel like something’s amiss when those kind of exchanges never materialize, or when the darker tone never gives way to the Flash Gordon-style adventure we’ve grown accustomed to. The score also suffers from comparisons. Michael Giacchino’s work is excellent, but despite a spattering of themes and adopted stylistic flourishes, the film simply doesn’t have the John Williams cues that have become so inextricably linked to the franchise. It’s a tension that runs throughout the film: it’s trying to be Star Wars, but not. It’s trying to do something original, but not too original.

Both the space and ground battles evoke a gritty, ‘70s realism

That said, the film’s production design and visuals are faithful and worthy throwbacks. Gareth Edwards has made no secret of his love for the original films, and that shows in every frame of Rogue One. The interiors of the Death Star are lovingly re-created, X-Wing dogfights feel pulled almost directly from A New Hope, and the art direction leaves no doubt that we’re in the same world we’ve visited before, perhaps just a few corridors away from some of the most iconic scenes in the franchise. 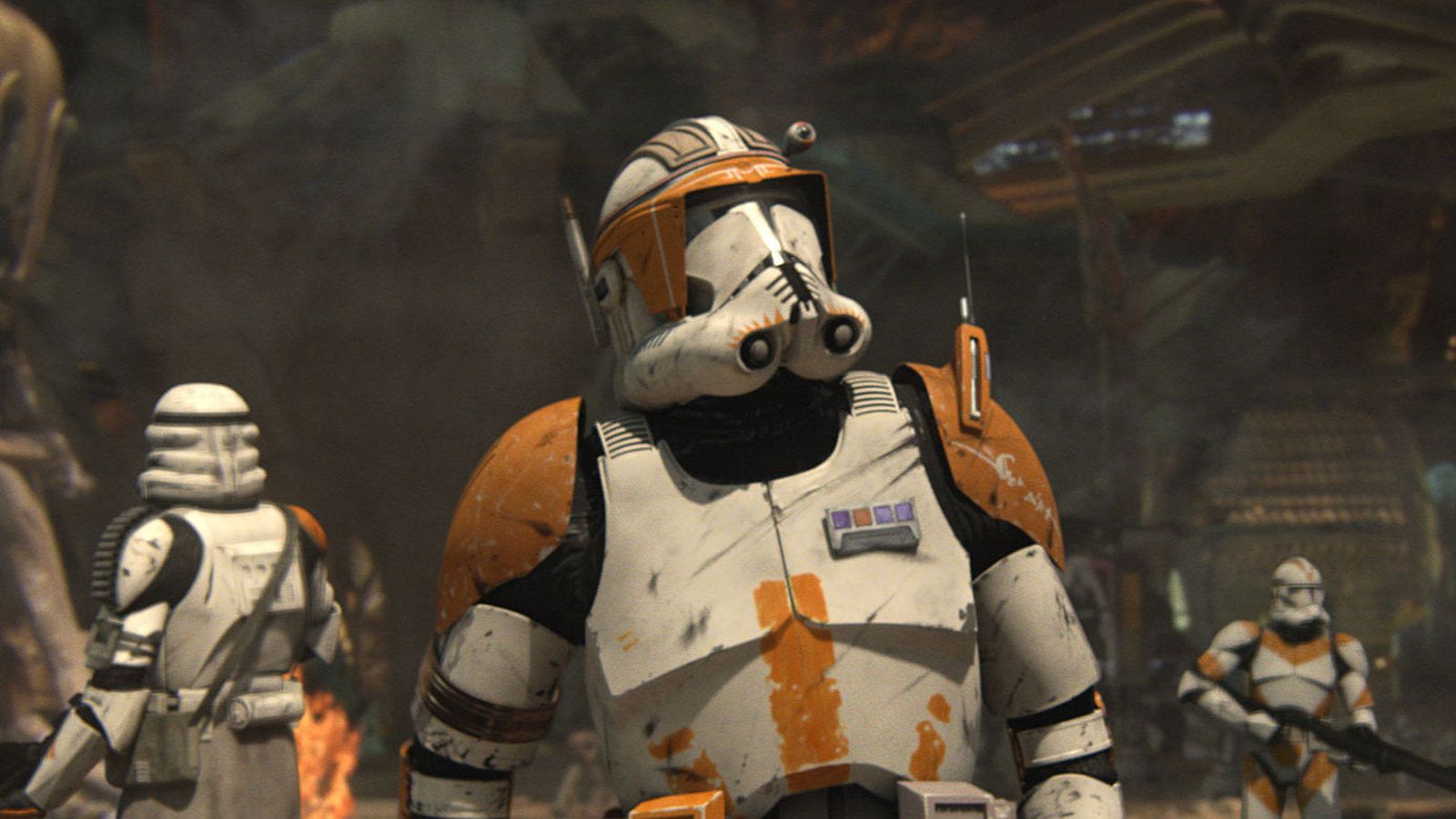 What Star Wars learned from its prequel problem

Rogue One, hitting theaters next week, is an experiment on the part of Lucasfilm to see if the Star Wars franchise can survive without having a Skywalker starring in a central role. Described as...

That sensitivity to the series’ aesthetics carries through to much of the visual effects work. The return to old-school practical effects for The Force Awakens was well-hyped (even though nearly all of it was augmented by CG effects), and both the ground and space battles of Rogue One evoke the same sense of ‘70s realism. It’s a credit both to Edwards’ own vision, and his devotion to echoing George Lucas, that his sequences feel so authentic and familiar while still having a lively, modern sheen. Though it’s a shame the film doesn’t deliver the same crispness when it comes to computer-generated characters. Several prominent characters — ranging from humans to aliens — simply fail to deliver, falling deep into the uncanny valley and taking the audience’s ability to suspend disbelief with them.

Perhaps it’s unfair to keep comparing Rogue One to what has come before. This is a new beginning, after all, despite the common design language and slew of Easter-egg references that pepper various scenes. But this is an uncommon situation, a supplement to a series with a look and feel that all moviegoers understand, even if only on a visceral level. J.J. Abrams was criticized heavily for focusing on nostalgia when he made The Force Awakens, but more than anything else, he was a studied disciple. Every wipe, camera move, and knowing callback was a choice, engineered to replicate the world that had come before.

Rogue One, freed from the shackles of an episode number, doesn’t even try to evoke that same level of verisimilitude. And while it might be bumpy for some moviegoers, that actually seems to be the point. The film soars when it abandons all pretense of being a space opera, and fully embraces the bombastic modern action movie that’s at its core, giving it a unique identity that does indeed stand apart from other entries in the series. Given that, it’s hard to shake the feeling that Rogue One takes place in a Star Wars world, but isn’t necessarily a Star Wars movie.

Perhaps that should have been apparent all along. These standalone movies were once referred to as “anthology” films, before the current naming convention debuted — Rogue One: A Star Wars Story. Quietly tucked beneath the title in posters and trailers, the phrase “A Star Wars Story” is a mild, almost glib downplaying of expectations. “Don’t focus on the expectations of Star Wars,” it seems to be saying. “That’s secondary. Just enjoy this smaller tale we’re telling.”

And if you’ll allow me to briefly touch upon the very first moment of the film (first frame spoilers!), that may also explain why the words Star Wars never appear in the opening credits at all. Rogue One is its own animal, a modern action film with many of the same problems in character and pacing that we see in so many other franchise movies. It’s a type of tentpole film that we’ve grown accustomed to, the kind that made the delightful banter and optimistic thrills of The Force Awakens feel like such a refreshing departure. Because while Abrams’ film echoed the franchise’s more rarified past, this is the real new Star Wars, where you don’t have to wait three years for the next installment, and there’s always some new book or comic or mobile game to keep you occupied when you need a fix.

The good news is that Star Wars fans will never want again… but the movies themselves may have gotten a little less special as a result.

What you Need to Know before Seeing Rogue One

Rogue One: the latest news about the new Star Wars movie