Dyson’s new Supersonic is the Tesla of hair dryers

I want one, but I won’t buy one

Share All sharing options for: Dyson’s new Supersonic is the Tesla of hair dryers

The hair-and-makeup tax is a real thing. It might be difficult to fully grasp the amount of time it takes people with long hair, or people who feel a whole lot better with a little bit of makeup on, to get ready to head out the door if you fall into neither category, but trust me: it takes time away from other things you’d rather be doing.

So when Dyson said earlier this year that it had reinvented the hair dryer, building one with a powerful 13-blade motor, high-velocity airstream, and temperature control, I took the bait. Tech! Of course new tech would fix the problem. I’ll be honest, I was hesitant to even write about it for The Verge because I assumed most of our audience wouldn’t share the same enthusiasm, but the promise of this hair dryer was too great: with the Supersonic, my morning routine would be expedited; my hair would be flawless; hell, even my bathroom sink would be less cluttered. Right? Right?

Reality came fast — faster than you can say "makeup tax," when I learned that the Supersonic cost $400. The Toyota Corolla of hair dryers this is not; it is more like a Tesla, fast and sleek and also out of my price range. I’ve spent the past couple weeks comparing my standard, $21 Conair with this new Supersonic, and I’ve determined that Dyson’s version of the hair dryer is completely covetable. But still: that’s a lot of money to pay for dry hair.

Dyson is known for its vacuums, and while a vacuum isn’t exactly something you’d envision putting close to your head, Dyson has borrowed technology from its modern vacuums and put it in this hair dryer. Specifically, the hair dryer has been built with Dyson’s “digital motor” technology, which is a brushless, direct current motor that is supposed to suffer less wear and tear over time. Dyson also says the motor spins at 110,000 revolutions per minute compared with 20,000 to 30,000 RPM for standard hair dryers.

The Dyson Supersonic is the Tesla of hair dryers

That’s some of the technical jargon behind the product, but what it means for practical purposes is that the motor is a tiny, 1-inch-wide thing that fits in the handle of the hair dryer rather than in the nozzle. The result is a light, 1.8-pound hair dryer with evenly distributed weight. When you hold the Dyson in one hand and a "regular" hair dryer in the other, you get a sense of how top-heavy other models are when compared to the Dyson. And when you’re using it for several consecutive minutes, you do start to appreciate this weight distribution.

The internals also inform the aesthetics of the product. The plastic head of the Dyson is an open-ended sphere rather than an elongated nozzle with a filter on the backend. There are exactly four buttons on the back of the hair dryer: a power button, a cool air button, heat settings, and air-flow control. The air and heat levels appear in a series of LED lights along the barrel. The filter, which is on the handle, has the word "Filtre" etched on it (I assumed this was because Dyson is a British company, but "filtre" is ... French). The design is undeniably elegant. As one hair stylist remarked when I asked him whether he had been using the Dyson in his salon, it looks like the kind of hair dryer that "those people with ‘Dwell’ homes would have."

But as with most new gadgets, what it can <em>do</em> is more important than its looks. Over the past two weeks I ran a series of tests with both the 1600-watt Dyson Supersonic and the Conair 1875-watt Turbo Style, which I picked up at my local drugstore for a mere $21. Starting with towel-dried hair and a spritz of heat protectant product, I timed how long it took to go from wet hair to dry — no elaborate styling, just some brushing and head-flipping.

First off: the Dyson Supersonic is not as quiet as you might think. There’s no doubt the whir of the high-tech hair dryer comes in at a different pitch than the blustery Conair, but it’s not like you’re safe from waking your sleeping roommate with the Dyson.

But the biggest surprise was that the Dyson didn’t dry my hair in significantly less time than the Conair did. Both dryers took somewhere between five and six and a half minutes to get my hair from towel-dried to dry, which isn’t that big of a difference. The biggest discrepancy, in my experience, was in how smooth my normally messy hair looked after using the Dyson. I thought I was possibly imagining this until I did this test on video, too, and two of our short-haired, male Verge video directors shrugged and said things like "Huh, yeah, it looks smoother, I think that side’s better, yeah."

This might be due to the sheer force of the air flow, or maybe the smart temperature-control features built into the Dyson, though it’s hard to say without putting my hair-drying experience through some more rigorous or scientific testing. Dyson says the Supersonic includes a "glass bead thermistor" — that’s a thermometer, for non-engineers, though it is lovely hearing "glass bead thermistor" over and over again in a British accent — that regulates the temperature of the air flow, even if you have the dryer popped up to the highest heat level.

I’ll admit that when I first read about this feature, I thought there might be sensors that interpreted the moisture levels in my hair as I was drying, and that the hair dryer would then adjust the heat levels. But I was over-excited in my estimation of how this works. Instead, the glass bead thermistor is only making sure the air doesn’t get too hot, which, in theory, reduces damage to your hair over time.

There are other details of the Dyson that are worth mentioning, like the fact that the three plastic attachments that come with it — a styling concentrator, a smoother, and a diffuser for curly hair — are all magnetized, and pop on and off the end of the hair dryer with ease. (I sincerely apologize to curly-haired readers: I cannot give an accurate review of how the hair-dryer-plus-diffuser works on curls.)

A long-haired person can dream

At the end of the day this is a luxury hair dryer, there’s no doubt about it. And at $400, I personally will not be buying it anytime soon. But I can appreciate Dyson’s high-tech approach to rebuilding a product that has essentially remained static for decades. And Dyson claims that it is fully committed to the hair dryer as a new product line, following an overall positive reception to this first one, which makes me think there may be more to come. A cheaper version, perhaps? A long-haired person can dream. Until then, I’ll keep wasting my morning minutes.

Our review of Dyson Supersonic 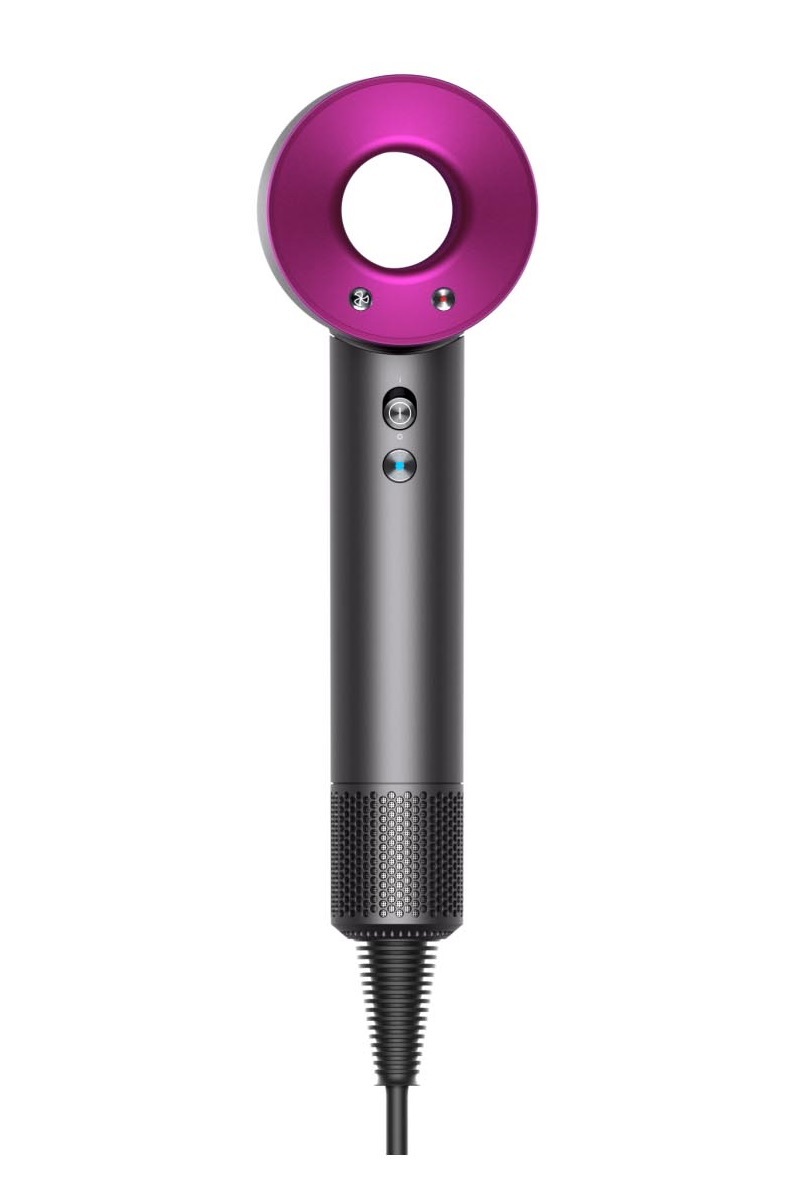