Google Tango on Lenovo's Phab 2 Pro: a work in progress

It’s a 3D world; we’re just living in it

There’s a lot going on with the Lenovo Phab 2 Pro smartphone, a dizzying array of things to consider. The first is that it’s massive, barely qualifying as a phone, with a 6.4-inch display and hard, chamfered edges that make it feel like a weaponized phablet. The second thing to consider is that this a Lenovo phone. For people in China, India, or Vietnam, this is not an anomaly. But in the US, where we prize our high-priced iPhones and Samsungs and various other Android phones, Lenovo is a brand-new entrant.

The third and most important thing to consider is this is the only device you can buy right now that supports Google Tango. Tango is Google-made software that, combined with specific hardware, offers advanced 3D sensing. If basic augmented reality creates a flat layer of digital information on your smartphone screen — think Pokémon Go, with the game content built on top of your real world — Tango goes beyond that, to the point where it interprets and measures spaces and objects around you and then lets you interact with digital things as though they’re really, physically there.

Tango still isn’t fully realized. It’s glitchy: apps sometimes freeze up or crash, and a few of its most promising apps are also the least intuitive. And there still aren’t that many apps to use with it. But when it works, it’s fun. It’s at least one step beyond a gimmick, and it’s easy to see how it could enhance the whole mobile experience if it comes to more phones.

Here’s what most people said to me when they saw the Lenovo Phab 2 Pro in my hands, in this order: Wow, that’s a huge phone, followed a few minutes later by, How did that cat get in my living room? I’ll explain the cat thing, but first, the phone hardware.

The $499.99 Phab 2 Pro is big hunk of brushed aluminum alloy with a 6.4-inch quad-HD display. Its physical build really isn’t bad once you get past the size: the display is coated in Gorilla Glass and it has shiny aluminum edges that give it a solid feel. It has a fingerprint sensor on the back; loud, powerful speakers; fast charging capabilities; it even has — wait for it — a headphone jack. And as with most larger phones, it accommodates a giant battery.

The Phab 2 Pro has three rear cameras, which are a critical part of the Tango experience

The guts are what make this a midrange phone, not a premium one. It runs on a customized version of Qualcomm’s Snapdragon 652 processor, which is okay but doesn’t match the performance of Qualcomm’s current top-of-the-line mobile processor, the Snapdragon 821. When it comes to still images, its cameras are pretty subpar; even in average, stable conditions, like under office lighting, photos snapped with the 16-megapixel rear camera looked noisy. 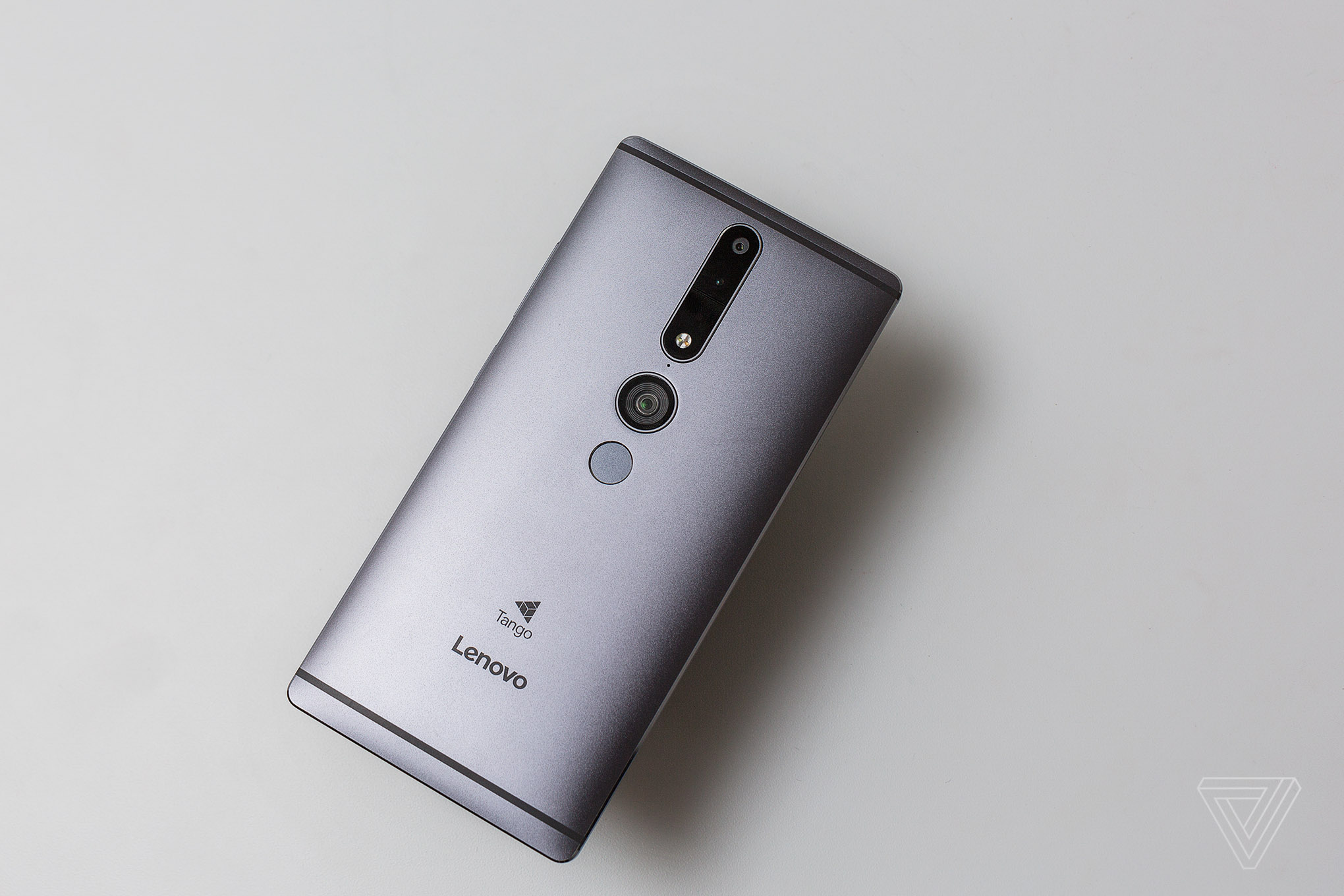 But the cameras are where things get interesting, because they’re a part of the Google Tango experience that comes with this phone. There are three cameras on the back of the phone, plus the standard selfie camera on the front. In addition to the rear 16-megapixel RGB camera, the Phab 2 Pro has a wide-angle fisheye camera and another camera with an infrared emitter. These, combined with the accelerometer, gyroscope, Snapdragon processor, and a custom-built depth sensor module, all make Tango work.

Normally, you know where you’re going and what objects lie in front of you when you’re moving through a three-dimensional space, but the phone doesn’t. In this case, the phone does. It not only tracks motion, but also has depth perception thanks to the IR emitter and other sensors. So when you’re running a Tango app, the cameras are mapping out an area, sensing depth, and remembering the space around you (you can actually see the IR emitter flickering while you’re running an app).

The example that Lenovo has shown most often in early demos of Tango technology involves furniture. Specifically, using the phone to measure a room and "place" digital furniture around the room so you can try before you buy. You can put a lamp on your desk, or a wall hanging right above your desk, and see how it all looks. You can plop a virtual couch in the corner of the room, walk up to it, walk around it, and see how it fits. This is the ultimate representation of Tango as a utility, but it gets a little more fun than just interior decorating (which, really, is a commerce play).

With Tango, you can plop a virtual couch in the corner of the room and see how it fits

The super simple apps, or ones that were downright silly, were more fun to use. There’s an app called AR Pets that places a dog or cat in your living space. It jumps up on your coffee table and paws at your smartphone screen; it is bizarre, and adorable. Bubbles is a mind-numbingly dumb and addictive app that lets you blow virtual bubbles into the universe and pop them with your finger. With the app Woorld, I planted virtual flowers all around our office, and watered them with virtual clouds, hanging from the ceiling.

You can easily see the educational opportunities with Tango, too. The Dinosaurs Among Us app, created in partnership with the American Museum of Natural History, lets you place dinosaurs in your real-life environment. You can hang framed illustrations of dinosaurs on your walls. A little digital placard next to your wall hanging will tell you all about the archaeopteryx dinosaur, as though you’re in an actual museum.

There are only around 35 Tango-optimized apps in Google’s Play Store right now, which isn’t many. Some apps, like Holo, feel straight-up beta. The apps that are supposed to be more useful — like the Wayfair furniture app, or the Lowe’s home improvement app — are the ones that feel buggy or unintuitive. When you fire up the Wayfair app, there is literally nothing on the interface that tells you how to use it. (You have to tap on a nondescript search icon to start searching for furniture, it turns out.) And if you decide you want to buy something, you’ll have to do it from the main Wayfair app, not the Tango one, which is called Wayfair View. Sometimes I would place an armchair in the room, and only figure out how to move it a dozen swipes later.

This only goes to show that Tango, while officially launched, is a mixed bag. It still feels experimental. And I wouldn’t recommend buying the $500 Lenovo Phab 2 Pro just for the phone itself unless you happen to be looking for a gigantic, midrange Android phone right now.

But this is only the first real implementation of Tango on a smartphone. Google has indicated that the future of Tango may be in indoor navigation, which would be another valuable use case; and another exec has suggested that this combination of cameras and sensors could someday be as commonplace in smartphones as GPS. If and when that happens — if Tango were to become more polished and accessible, and if tons of apps were optimized for it — then it becomes a conversation about whether to buy a phone based on it. Right now, it’s mostly kittens and couches in living rooms. Then again, some of the most game-changing tech we use every day started out as just "fun."