It’s funny to think that the most interesting tech products of 2016 have been routers. The router has transformed from a utilitarian computer hardware with antennas sticking out of it to multiple, sleekly designed pods that are placed throughout your home. This method of using more than one device as a wireless access point is known as a mesh system, and it promises to fix those dead zone problems traditional routers often succumb to.

Eero is the most well-known mesh router system, though others have quickly hit the market, including efforts from Netgear and other startups. Now Google is getting into the mesh router game with the Google Wifi, a multi-point router system that shares more than a few similarities with Eero.

Google says that the Wifi system is the product of three-and-a-half years of work — and it has previously released a router, called the OnHub. But Google Wifi is different from what Google did before. First of all, Google is making it directly. Google Wifi also leverages both clever hardware design and cloud-based intelligence to make sure you have a strong Wi-Fi signal throughout your home, no matter its size, construction, or layout. In addition, Google designed the product so that it can be easily set up via a smartphone and managed and controlled remotely. Easy guest network setup and parental controls are also part of the Wifi pitch.

Google Wifi, which is hitting stores today, is sold individually ($129) or as a three-pack ($299). That’s a lot less than the $499 Eero asks for a three-unit setup and still cheaper than Netgear’s well-reviewed $399 Orbi, yet it makes many of the same promises. Google says a single unit can cover a 1,500-square-foot home, while a three-pack will span a 4,500-square-foot residence. Additional units can be added for coverage beyond that.

I’ve spent the past week testing a three-pack of Google Wifi in my modest, two-story home. To put Google’s claims to the test, I compared it to Eero and Orbi in the same environment. Though my home isn’t especially large, it presents challenges to traditional routers, thanks to older construction and lots of walls. It’s an ideal candidate for a mesh network system, and all three systems provided much better coverage than a single router has in the past. Google Wifi, while not the fastest system I tested, hits a good balance between speed, coverage, ease of use, and cost, which makes it a compelling option if you’re looking at a mesh router system.

Design has always been an afterthought with traditional routers, taking a backseat to functionality — and that has meant big, ugly designs with spidery antennas. But since mesh systems work best when they are out in the open and spread throughout your home, they should look somewhat nice. Fortunately, Google Wifi does: each unit is a compact, unobtrusive cylinder that can be tucked away on a shelf or counter and doesn’t look like a piece of computer equipment in the middle of your living room.

It’s about twice as tall as the Eero’s squircle, and can be best described as two hockey pucks that have been painted white and stacked on top of each other. There’s a lone light between the two pucks that indicates status — blue for setup, white for connected — which can be disabled via the Google Wifi app.

On the bottom of the Wifi unit is a power port and two gigabit Ethernet jacks: one for an internet connection from your broadband modem and a second to attach hardwired devices, such as hubs for smart home products. That’s about it for the Wifi’s exterior hardware — unlike traditional routers that might have multiple Ethernet ports, the Wifi needs a network switch to expand its port selection (just like the Eero). It also doesn’t have a USB port to attach a storage drive for media or backups, which many routers provide.

Under the hood, the Google Wifi has AC1200 2x2 Wave 2 capabilities and supports both 2.4GHz and 5GHz 802.11a/b/g/n/ac networking. It is secured with the standard WPA2-PSK protocol. (This is essentially the same hardware found in each Eero point.) The Wi-Fi hardware in each unit isn’t especially remarkable, but when you have multiple points in your home, the need for each one to be high-powered diminishes.

Setting up the Wifi system is done through Google’s new Wifi app for iOS and Android (formerly the OnHub app). The app walks you through setting up a new network, naming it, securing it with a password, and placing the Wifi units throughout your home. It also lets you check your network speeds, from both your ISP to the modem and from Google Wifi to your device, and the strength of signal between each node. Google’s Network Assist feature will provide tips on how to improve performance by moving a unit to a different location or will tell you when the internet from your ISP is not functioning.

In addition, the app lets you see how many devices are connected to your network, pause Wi-Fi on specific devices, prioritize others, and easily create a guest network. It also has very basic smart home features, which are limited to controlling Philips Hue lights at the moment. The app allows for remote access to the network, so you can manage it even when you’re not at home. 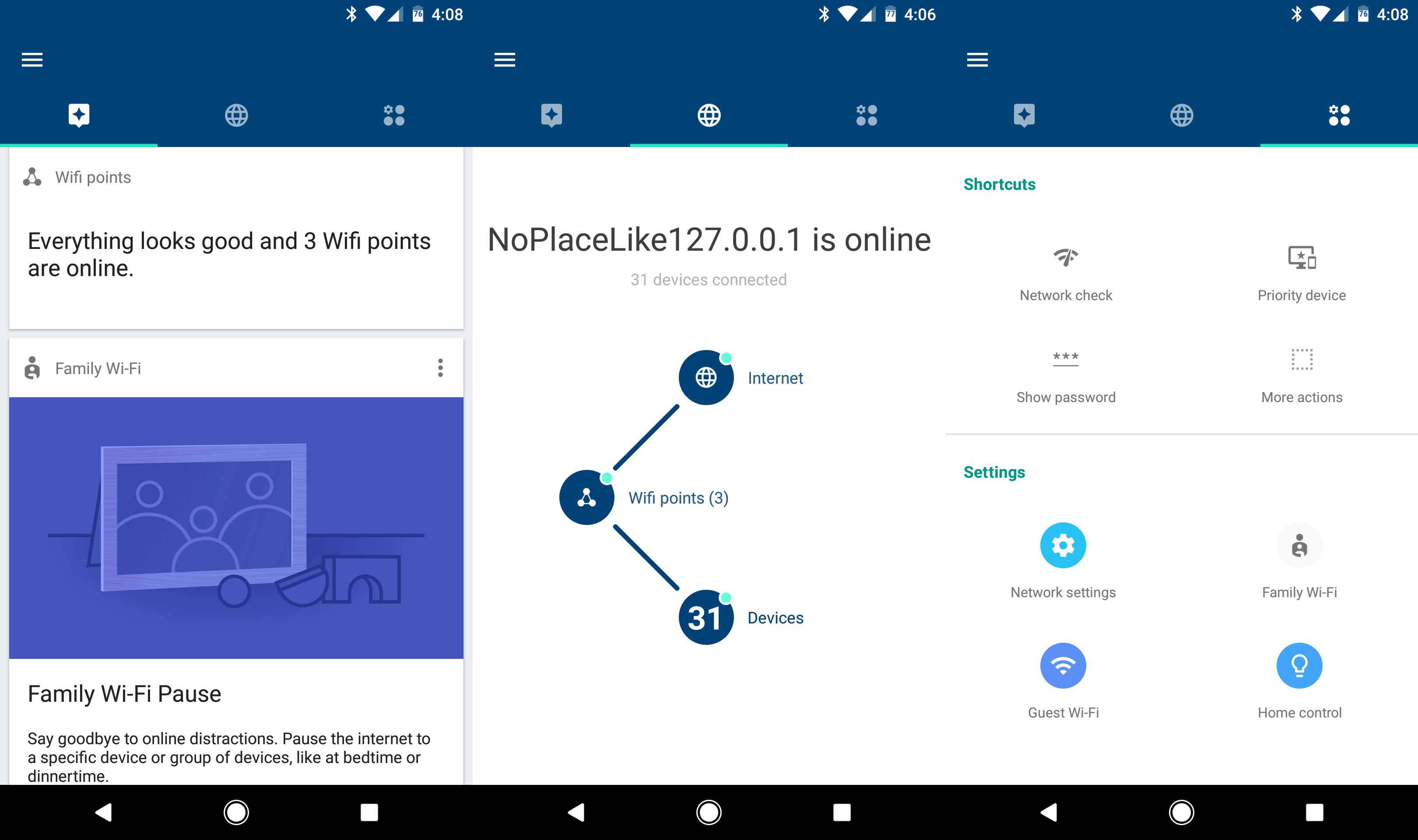 Getting the Google Wifi system up and running in my home was painless and took about 10 minutes total to complete. My house is not large, but it has older construction and its main living spaces are additions to the original structure, meaning that one of their walls used to be an exterior wall, which presents an even greater challenge for wireless signals. Further, the modem is located in an upstairs room, making it difficult for a standard router to reach the additions on the left and right sides of the house.

I put one Wifi point in my upstairs office, connected to my ISP’s modem. (If you have a combination router and modem from your ISP, you will need to disable its router functionality in order to use Google Wifi.) I then placed the other points in the areas where a traditional router struggles to cover: the family room on the right side of the house and the master bedroom on the opposite side.

I have a lot of wireless devices constantly connecting and disconnecting to the network, presenting other challenges to the router. At any given time, there might be two or three dozen (and sometimes more) devices ranging from phones to tablets to laptops to TVs to set-top boxes to light bulbs to speakers and others connected to the Wi-Fi network, which can cause difficulties with traffic routing and interference.

In each room, Google Wifi was able to provide a strong wireless signal and enough internet bandwidth for the most demanding streaming needs, including 4K video. (My home internet plan provides 200Mbps download speeds and 35Mbps uploads.) Unsurprisingly, the furthest room (our bedroom) proved to be the hardest test, but I was still able to get an average of 90Mbps download speeds in there, which is more than enough for streaming Ultra HD video.

Results are averages of three consecutive tests using Ookla's Speedtest, with server manually selected to nearest geographical location. Devices' Wi-Fi connections were refreshed at each location to force connection to the nearest node. Internet service plan is a 200Mbps / 35Mbps cable connection from Optimum Online, which enters the home through the "Office" location.

Compared to Eero using the same setup (main point in the upstairs office, a point in the family room and a point in the bedroom), Google Wifi provided the same amount of coverage and internet speeds. Orbi, which uses two units instead of three (one placed in the office, one in the bedroom) offered up the fastest speeds and was able to max out my internet connection in every room, including the troublesome master bedroom. But though Orbi only has two units, they are physically much larger than either Google Wifi or Eero and not nearly as discreet. Orbi is also more expensive than Google Wifi and doesn’t have an easy app-based management or setup system.

Coverage and throughput aren’t the only things that matter with a mesh system: it also needs to ensure all your devices are getting their Wi-Fi from the closest access point instead of staying connected to one further away. Google says that the Network Assist feature in Wifi will manage moving devices from point to point and switching Wi-Fi channels automatically in case of congestion. In the time that I’ve been testing it, I’ve not encountered issues where my devices lose signal or coverage because they didn’t connect to the proper access point. The Wifi app does show which point each device is connected to, but it doesn’t allow you to force devices to hop from one to another.

The question with all of these mesh router systems is do you need to invest in them at all, or will a good, standard router cover you? That really depends on your home and wireless needs, and your environment and needs are certainly different than mine. But if you’ve had issues with getting coverage from a standard router and have had to rely on things like network extenders, a mesh system is an obvious choice for your home.

Google Wifi is not the fastest performing mesh system, as borne out in my testing results. But it is less expensive than the others and is very easy to set up and use. It provided more than enough of my (generous) internet connection to reliably stream 4K video in every room, and it was able to blanket my home with a strong Wi-Fi signal, despite the multitude of devices connected to it at all times.

Google Wifi strikes a nice balance between price, performance, and ease of use

If all you care about is raw performance, Orbi is a better router, but for overall experience, including cost and maintenance, Google Wifi is an easier system to use. It’s also an ideal choice for someone looking to improve Wi-Fi in a relative’s home and manage it remotely, since the app makes it very easy to troubleshoot issues even if you aren’t physically connected to the network. Google Wifi was able to provide the same amount of coverage and experience as Eero’s system for $200 less.

Google Wifi is the next logical extension of what Google started with OnHub last year: it takes the simple setup, app-based control, and machine intelligence introduced by OnHub and marries it to a mesh system that can cover larger or more challenging areas with strong signal. And if you’re going to invest in a mesh system, Google Wifi is the one I’d pick.