Tissue made of living cells and biodegrable, plastic-like materials

For the first time, scientists have produced 3D-printed structures made of living cells that are big enough and strong enough to replace human tissues.

A bioprinter, described today in Nature Biotechnology, was used to make ear, bone, and muscle structures out of plastic-like materials and living cells belonging either to humans, rabbits, rats, or mice. The cells survived the printing process — a feat that has not been easy to accomplish in the past — and the structures were stable enough to be successfully implanted in rodents, the researchers report. If the technology works in humans the way it has in animals, doctors may soon find themselves using bioprinters to produce replacement cartilage and bone for people who have been injured, using a patient's own cells. 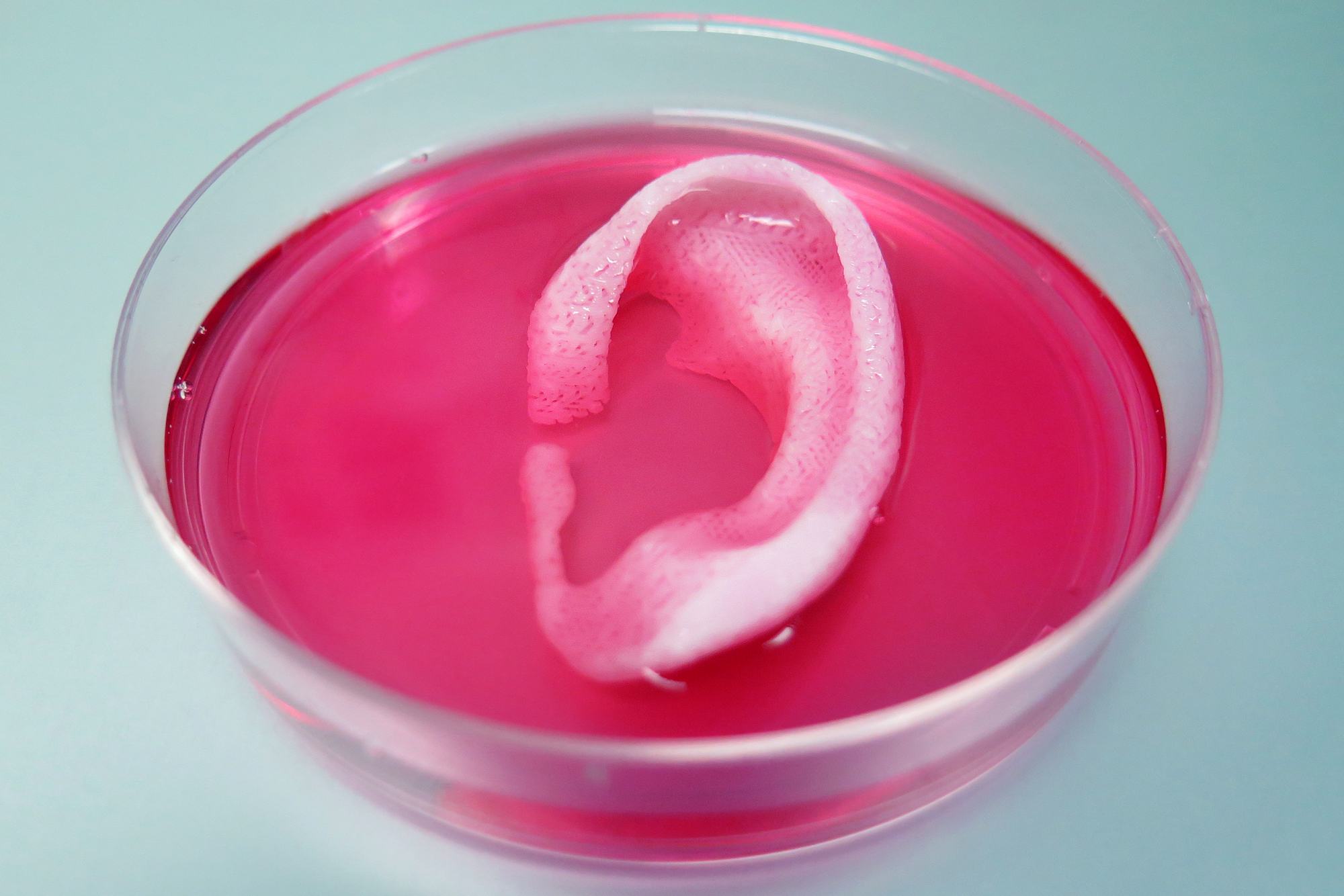 The production of 3D-printed organs and tissues isn't new; scientists have been working on them for years now because they can be used for everything from testing an organ's response to a drug to replicating the shape of tissues that a patient has lost. Case in point: a company called Organavo has been 3D printing kidney tissues for use in drug trials. And last year, researchers in Australia created 3D-printed brain tissue. But so far, most of these structures have been too unstable, too simple, or too small to implant in humans. That's why today's study is a step forward, says Ali Khademhosseini, a biomedical engineer at Harvard University who didn't work on the bioprinter. Researchers were able to show for the first time "that you can actually make functional, vascularized tissues in large enough structures that can be used for clinical applications," he says.

The custom bioprinter makes the implants by carefully layering patterns of cell-containing gels and biodegradable, plastic-like materials. Then, the printer adds a temporary polymer outer shell that helps the entire structure hold up during implantation. The printing process has been fine-tuned to ensure that cells remain alive until surgery. Once implanted in an organism, the plastic-like materials slowly degrade. At the same time, the cells secrete a supporting matrix that helps maintain the implant's shape. By the end of this process, the cells have reorganized themselves in a self-sufficient manner that negates the need for supporting materials.

To test the implants, the scientists inserted them under the skin of mice and rats. The structures showed promise; two months later, the ears, which were implanted in mice, had kept their shape and proper cartilage tissue had formed. For the muscle, the researchers found that two weeks after the surgery, the muscle implant had prompted nerve formation in rats. Finally, the bone implants, which were printed using human stem cells and implanted in rats, triggered the formation of a blood vessel system that was observable after five months.

The ear will be "cosmetically and even functionally beneficial."

"It’s pretty cool — even if they pull off just an ear [in humans], that would be cosmetically and even functionally beneficial," says Adam Feinberg, a biomedical engineer at Carnegie Mellon University. For patients who have lost an ear, a mirror image of their remaining ear would be acoustically better for hearing than a prosthetic, he says. "The shape of the ear is key" to capturing sound.

"They were able to get large constructs that were viable long enough to be implanted, which is not trivial at all," says Gordana Vunjak-Novakovic, biomedical engineer at Columbia University who didn't work on the tissues. "This is an important study that shows, convincingly and elegantly, that custom-designed tissues can be produced in lab in the anatomically correct clinical sizes and shapes, and with channels facilitating infiltration of cells and fluids." 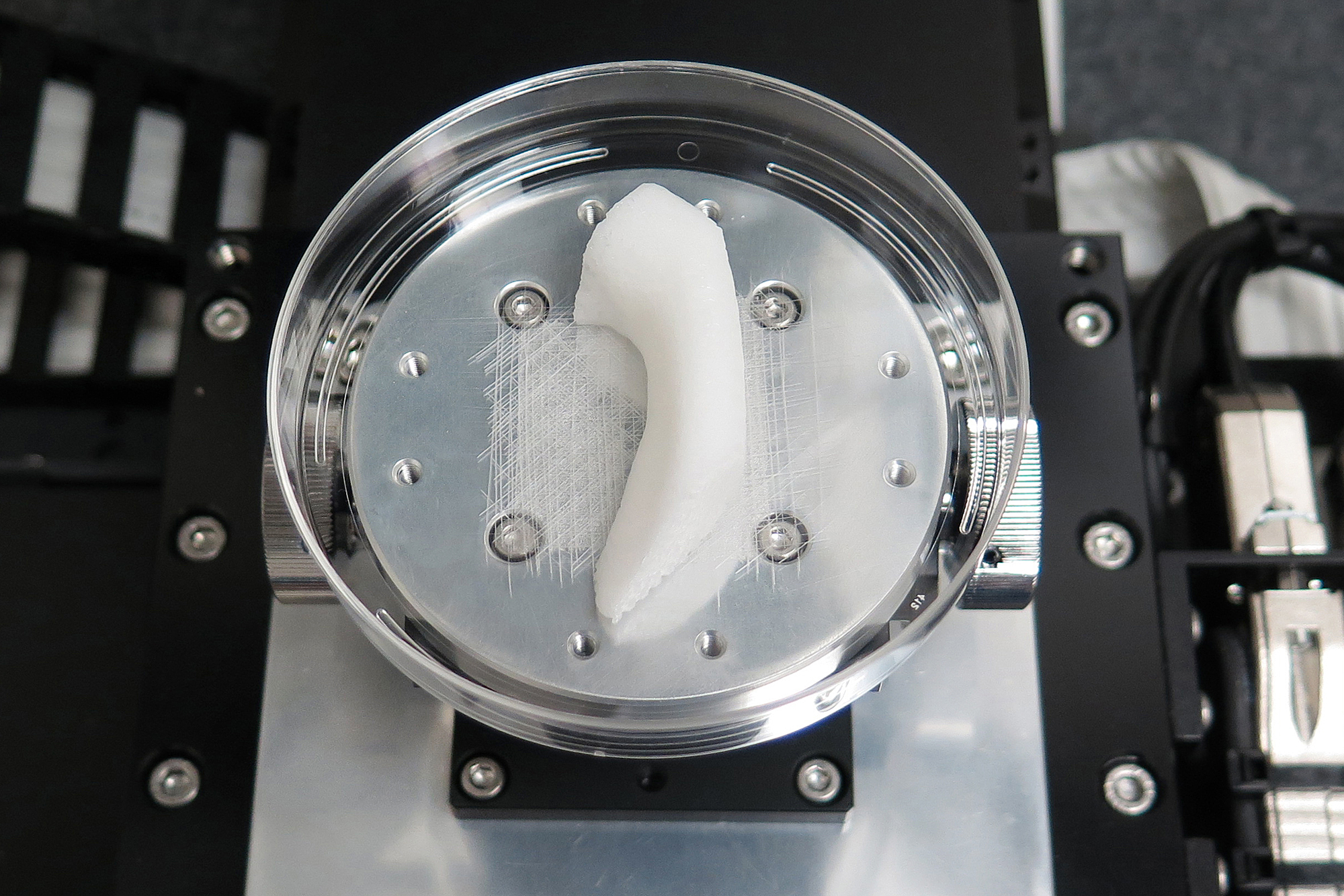 The study was conducted by the Wake Forest School of Medicine and funded in part by the US Army, so it's possible that these structures could be used to help American soldiers who've been injured on the battlefield. But there's still a lot of work ahead; scientists haven't tested these tissues in humans, so we don't know if they're safe yet. But the technique seems viable, Feinberg says — especially for cartilage. Cartilage structures are likely to make it to human testing first, he says, because, unlike muscle and bone, cartilage can do well without an extensive blood vessel system. "Cartilage has the highest chance of success," he says.

And success with this technique will likely be accompanied by many others; the field of tissue engineering is about to get a lot more prolific, Feinberg says. "You’re going to see a lot of exciting advances over the next year or two that will push this from the realm of science fiction into something that’s close to impacting patients."