Nextbit Robin review: a smartphone in the clouds

Can slick design and seamless backups make the Robin fly?

Chances are, if you’ve owned a smartphone over the past few years, you’ve used it for countless things: sending messages, using apps, capturing photos and video, or playing games. It’s no secret that installing apps and games and taking photos and video with your phone rapidly consumes the storage available to you, and it doesn’t take much to hit storage limits on your phone.

When you do run out of space, which you likely will, there are three ways to deal with it. You could buy a phone with more storage to begin with, or pick one that has the option for storage expansion. (Most people do neither of these things.) You could plug your phone into your computer and offload pictures and video to make space. Or, you could go nuclear and delete apps, games, photos, videos, and music from your phone to make room for other fun stuff you want to do with it.

None of those options are really great when you’re in a pinch and just want to take a few more photos, but what if you didn’t have to worry about storage at all? That’s the promise Nextbit is selling with the Robin, a $399 Android phone available for purchase starting today.

The Robin is a typical mid-range Android smartphone that comes unlocked and works with AT&T or T-Mobile (a CDMA version for Verizon and Sprint is expected later this year), but it’s paired with Nextbit’s own cloud-storage service and some clever software to make sure that you don’t run out of space on your phone when you most need it. It’s a lofty promise, and Nextbit’s solution is unique, though it still needs some work before you can truly forget about storage and just use your phone as much as you’d like. 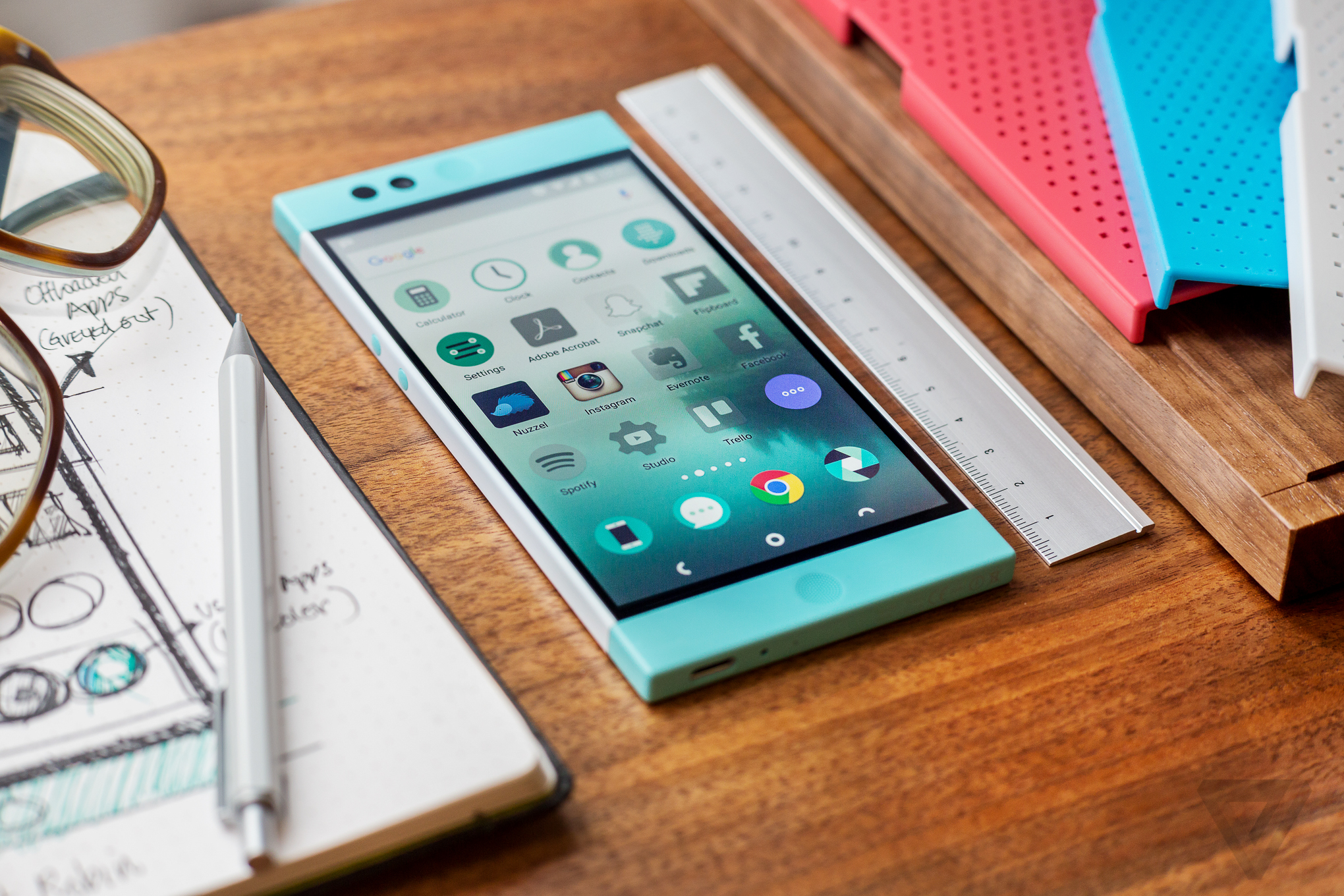 The Robin’s hardware isn’t much to get excited about: it’s largely similar to other mid-range Android phones released in the past few months. It has a 5.2-inch 1080p display that’s plenty sharp, but a bit washed out compared to a Samsung Galaxy handset or an iPhone. It’s powered by a Qualcomm Snapdragon 808 processor and 3GB of RAM, which is enough for decent, if not face-melting performance. Its 2,680mAh battery is good enough to get me through a full day of use without worry, and the dual front-facing speakers make for a nice sound experience when watching video or playing games. The Robin’s camera is a 13-megapixel sensor with dual-LED flash, and there’s a 5-megapixel selfie camera up front. It also has a fingerprint sensor embedded in the side-mounted power button and a USB Type-C charging port on the bottom. 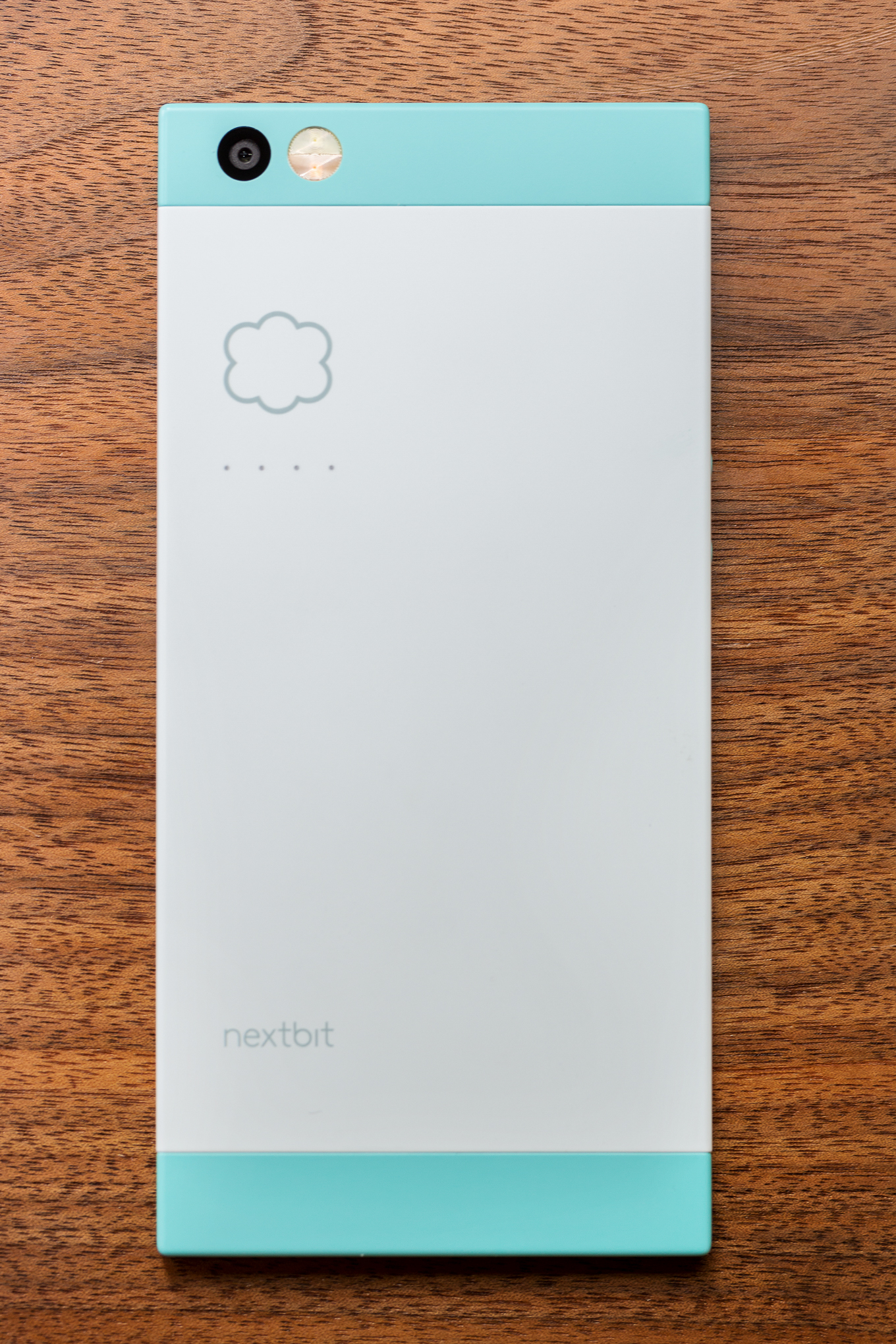 In short, the Robin offers exactly what I’d expect from a $400 Android phone in 2016. It’s not as fast as a flagship, like the Note 5 or Nexus 6P, nor is it frustratingly laggy or slow 1. The biggest disappointment comes with the camera, which is slow to shoot and doesn’t capture pictures that are anywhere near as good as I can get with an iPhone, Galaxy, or Nexus phone. Taking pictures of a moving subject, such as a child or pet, is an exercise in frustration2.

Nextbit says a software update is planned for April to address the shutter lag and other software bugs, but I wouldn’t expect it to dramatically improve image quality.

The design of the phone is another story altogether. Instead of rounded edges and metal or glass finishes, the Robin is all sharp angles and matte plastic that’s soft to the touch without feeling cheap or flimsy. Its pastel colors stand out among the sea of grey, gold, and silver smartphones, and they are refreshing to look at, while still being attractive to the eye. Nextbit is also selling snap-on plastic cases in complementary colors to the Robin; I’m particularly fond of the coral one.

There are little touches throughout the Robin that eagle-eyed design aficionados may appreciate3. Some of them work well: the circular front camera, sensors, and speaker grilles echo the circular camera and flash on the back and volume buttons on the side and provide contrast to the Robin’s sharp rectangular shape.

This shouldn’t be a surprise: Nextbit’s head of design, Scott Croyle, comes from HTC, where he was key in the development of the lauded One series of smartphones.

The Robin's design is pleasant and refreshing to look at

I’m also not a fan of the fingerprint sensor embedded in the power button: it’s not as fast as the iPhone 6S or Nexus 6P scanner, and I have to depress the button to make it work, as opposed to it just waking the phone when I rest my finger on it. The bottom speaker is also dimpled in such a way that my thumb gravitates toward it, even though pressing it does nothing. Still, these complaints are largely minor, and I’m a big fan of the Robin’s overall look and aesthetic appeal. 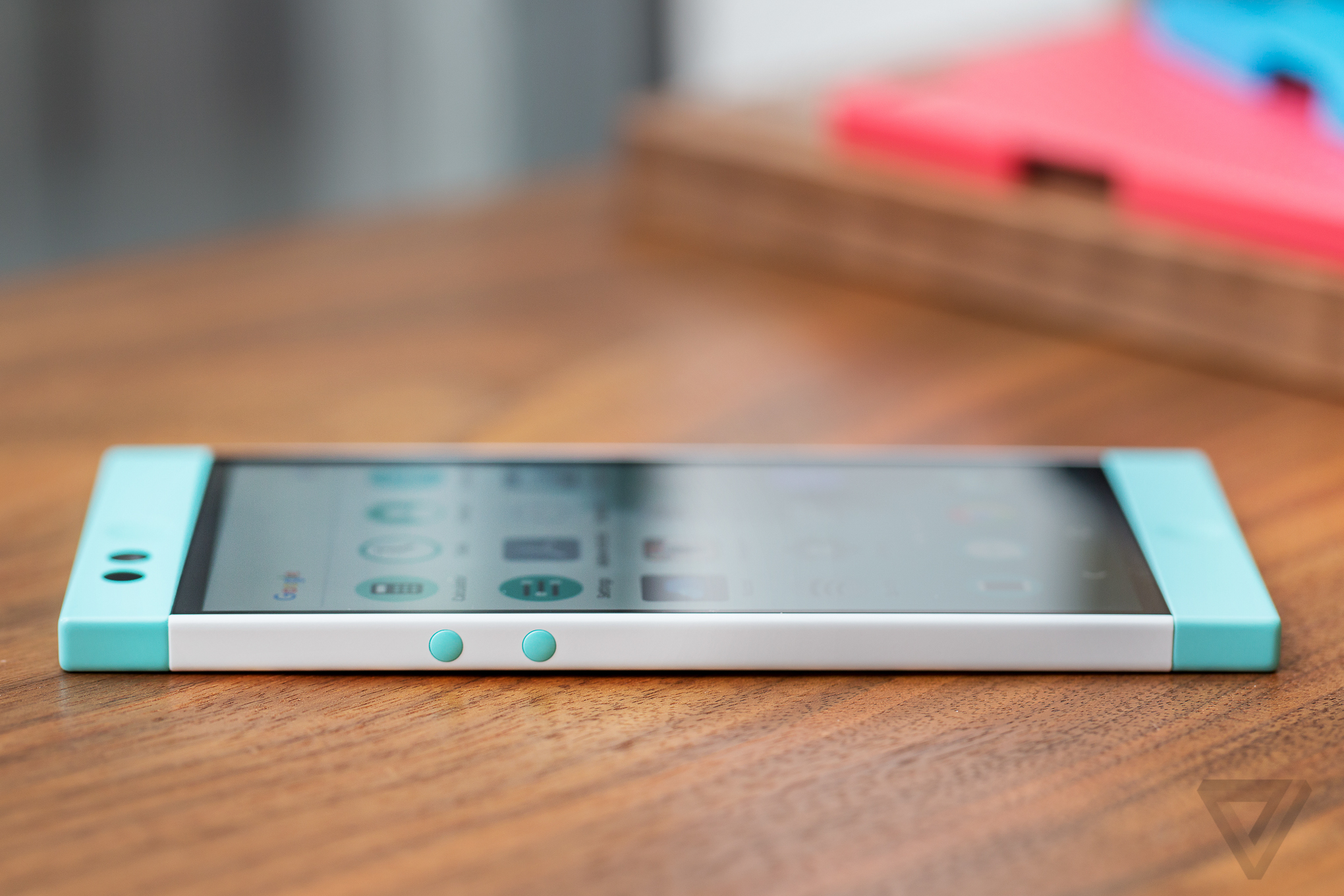 But the specs and design of the Robin are just a side story here: its real appeal is that it’s never supposed to run out of storage space. The Robin comes with the standard 32GB on board plus 100GB of cloud storage provided by Nextbit at no extra charge. This isn’t the same as the cloud storage you might get from Dropbox or Google Drive — it exists solely to back up your phone’s data, apps, games, and photos. Essentially, you’re getting the storage space provided by a 128GB smartphone for a much lower price. 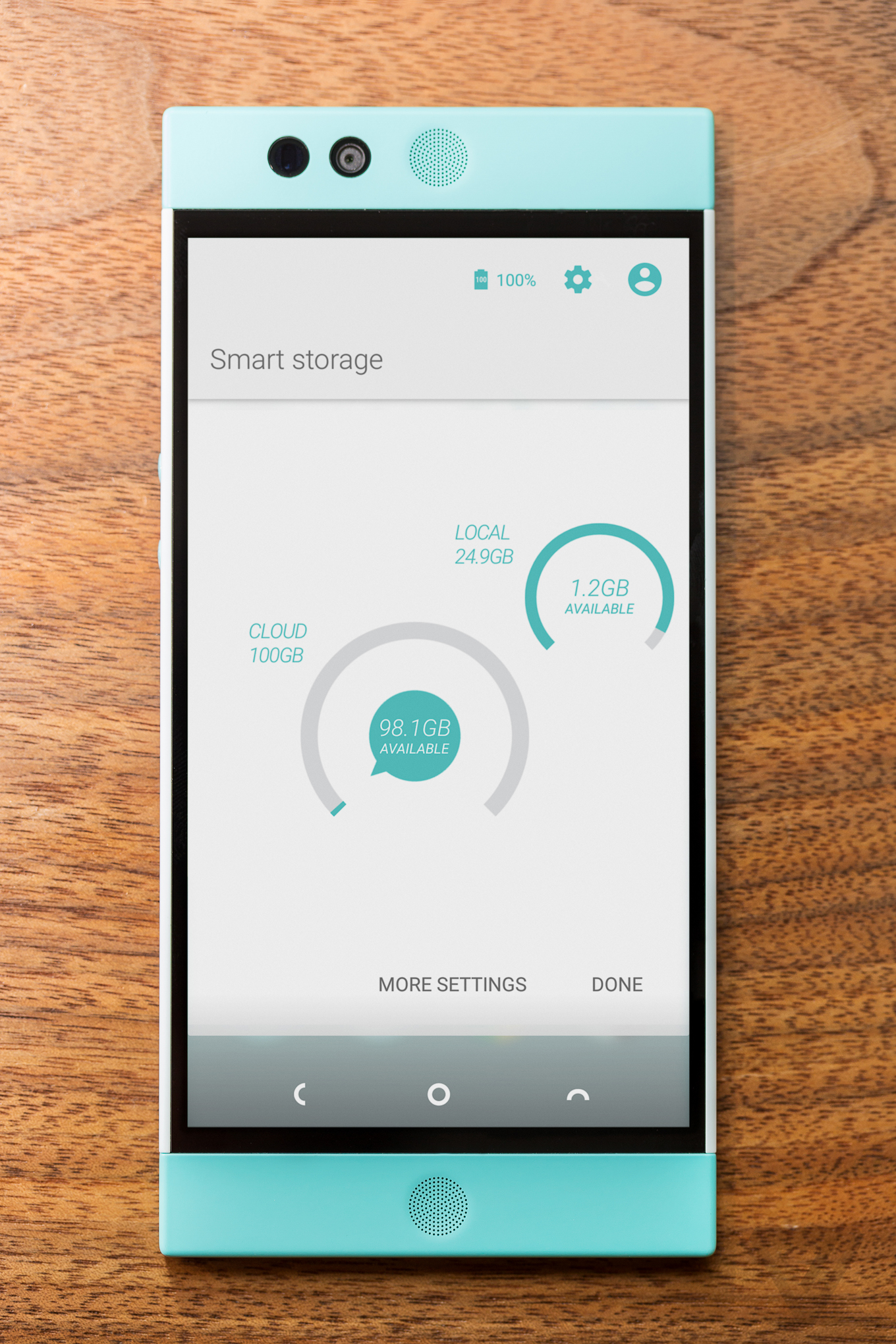 Here’s how it works: when you plug the Robin in to charge and connect it to Wi-Fi, it backs up your installed apps plus your photos to Nextbit’s cloud. Then when you’ve hit a certain threshold (below 2.1GB of free space remaining), the Robin will remove apps and games (starting with those that haven’t been used recently) from the device automatically, leaving a greyed-out icon (or a "ghost," in Nextbit parlance) in the app launcher. It will also remove full-size photos and leave behind smaller files optimized for the screen resolution.

To restore an app to the Robin, tap on the ghost icon and the app will be downloaded from the cloud and reinstalled on the phone. This can take a few minutes, especially if you’re restoring an app while on a cellular connection, but other than the wait, the process is seamless. Once an app is restored, it will work just as it did when it was removed from the phone, complete with logins, game progress, and other data intact. Restoring full-size photos works in the same fashion.

You can monitor how much storage you have remaining on both the phone and in the cloud, and you can change when the Robin will perform its backups and what will be backed up. Apps can also be "pinned" to the Robin so they’ll never be removed, and you can see a list of all the archived apps Nextbit is storing in the cloud.

Apps, games, and photos are backed up, but not video

There’s a significant gap in the Robin’s cloud backups, however: It doesn’t yet back up video, which consumes more space than photos or apps for most people. And should you move from the Robin to another device, it’s not clear how you’d get your data that’s in the cloud to the new phone.

The rest of the Robin software experience is mostly stock Android 6.0 Marshmallow with a custom app launcher. The app launcher mimics the iPhone’s layout: it’s just a grid of app icons without a drawer, and widgets are available as an overlay accessible via a pinch-in on the screen or a long-press on the multitasking button4. If you use a lot of widgets or want a more traditional Android launcher, the Robin supports third-party options from the Play Store, including the Google Now Launcher. Nextbit doesn’t preinstall any extra apps on the Robin aside from Google’s standard suite and it has promised swift software updates; the update for Android 6.0.1 is due to arrive in April, a few weeks after the Robin ships.

The way the Robin manages widgets is reminiscent of OS X’s Dashboard. 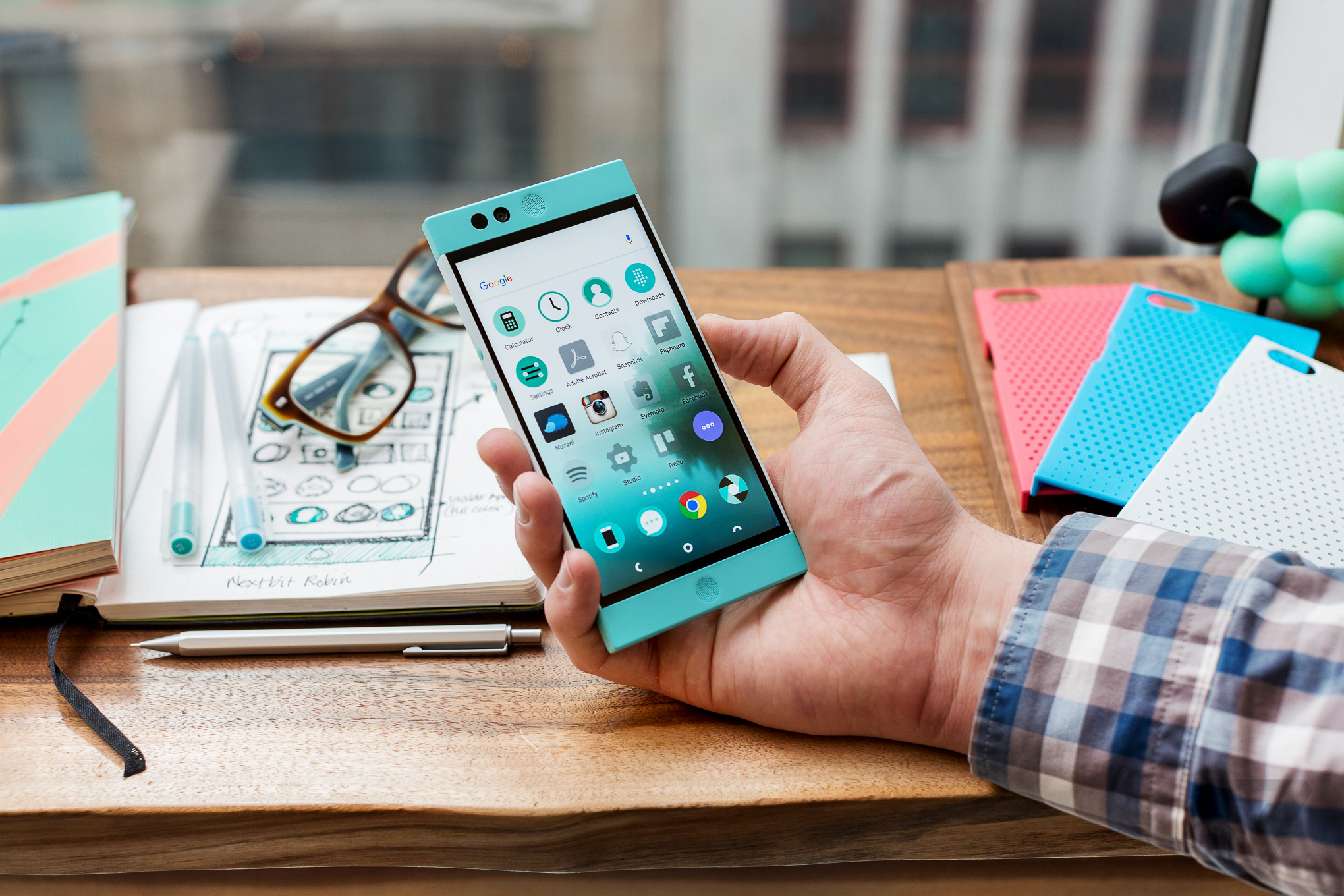 The Robin’s hardware doesn’t offer anything that you couldn’t get from a Nexus 5X or another similarly priced Android phone, and while its design is captivating, it’s probably not enough for most people to buy the phone based solely on its looks.

So the main question here is: does the Robin’s unique cloud storage system do enough to make it stand out? The problem that Nextbit is trying to solve is real for a lot of people and will only continue to be an issue as we use our phones for more and more stuff every day. Nextbit’s solution is clever and simple to understand, and it doesn’t require further investment once you’ve bought the phone.

There are other questions that arise, though, aside from the features like video backup that are currently missing. It’s not unreasonable to ask yourself if you’re comfortable with trusting your data to a startup with no proven track record. What happens if Nextbit folds in the next year? What happens if you switch to a different phone?

Nextbit's concept is better than its execution

The future of this system — seamlessly combining on-phone storage plus cloud storage — might not be tied to a specific phone at all. It doesn’t take a huge leap of logic to see this same concept offered as a feature on another device, whether that’s something integrated into Android itself or added on top of it.

If that happens, Nextbit’s real innovation will be the idea of its cloud storage system, not the Robin itself. Ideas are great, but when it comes to buying a phone, spending $400 on an idea might not be that great.