Mossberg: The Nextbit Robin is a smarter smartphone

Mossberg: The Nextbit Robin is a smarter smartphone

Smartphones, especially Android smartphones, are beginning to look and work pretty much the same. Major gains in function and design are rarer and rarer. Though there are always small new features and specs, few of these make a big difference in daily use with high reliability and little work or thought on the part of the user.

But I've been testing a new Android smartphone that clears that hurdle. It cleverly addresses a serious pain point for users by automatically freeing up storage space as you are about to run out. Even better, it does this intelligently, and in a way that's reversible, so you never lose access to your most-used stuff, or lose anything permanently.

The phone is called the Nextbit Robin. It's a mid-range, but capable Android phone from a small, independent startup led by ex-Google and HTC executives and engineers, and goes on sale at the company's website, starting today, unlocked, for $399. That price gets you 32GB of internal storage and 100GB of cloud storage, for as long as you own the phone. There are no other prices or storage amounts offered.

You can, of course, get that much storage right on your smartphone today, but it will cost you much more. For instance, there's an iPhone 6S model with 128GB of local storage plus 5GB of free cloud storage — for $849.

I've been testing the Robin for six days, and I like it. The company provided testers like me with phones whose storage was full, so we could observe and test the automatic storage management process, which worked quite well for me. All the standard smartphone functions also worked adequately.

The Robin has a variety of other features and design choices that make it different from typical Android phones. Its colorful, spare plastic design doesn't look like other phones. It also has a few weak points, but nothing in the device approaches the importance and innovation in the way it handles storage. It's a cloud-first phone.

The running-out-of-space problem is so common and so annoying (especially on the unforgivably stingy 16GB base iPhone) that it regularly spawns guides on how to overcome it, like this one and this one. And it happens on low-priced, low-storage Android phones, too, especially now that memory-expansion card slots are becoming rarer.

The Robin has its own cloud storage system, separate from the ones Google uses in Android for, say, photos or music (though those can still be used with the Robin for their intended purposes). This Robin cloud system automatically synchronizes the phone when it's connected to Wi-Fi and plugged in.

More importantly, the phone automatically notices which apps and photos you haven't used in a long time. When you download a new app, take a photo, or otherwise add data that threatens to cause you to run out of room, the Robin "archives" the local copy of one or more of your least-used apps or compresses one or more least-used photos, to make room. It starts doing this when you reach a "minimum storage threshold" of about 2.1GB, roughly the maximum size of a large Android app like a game. 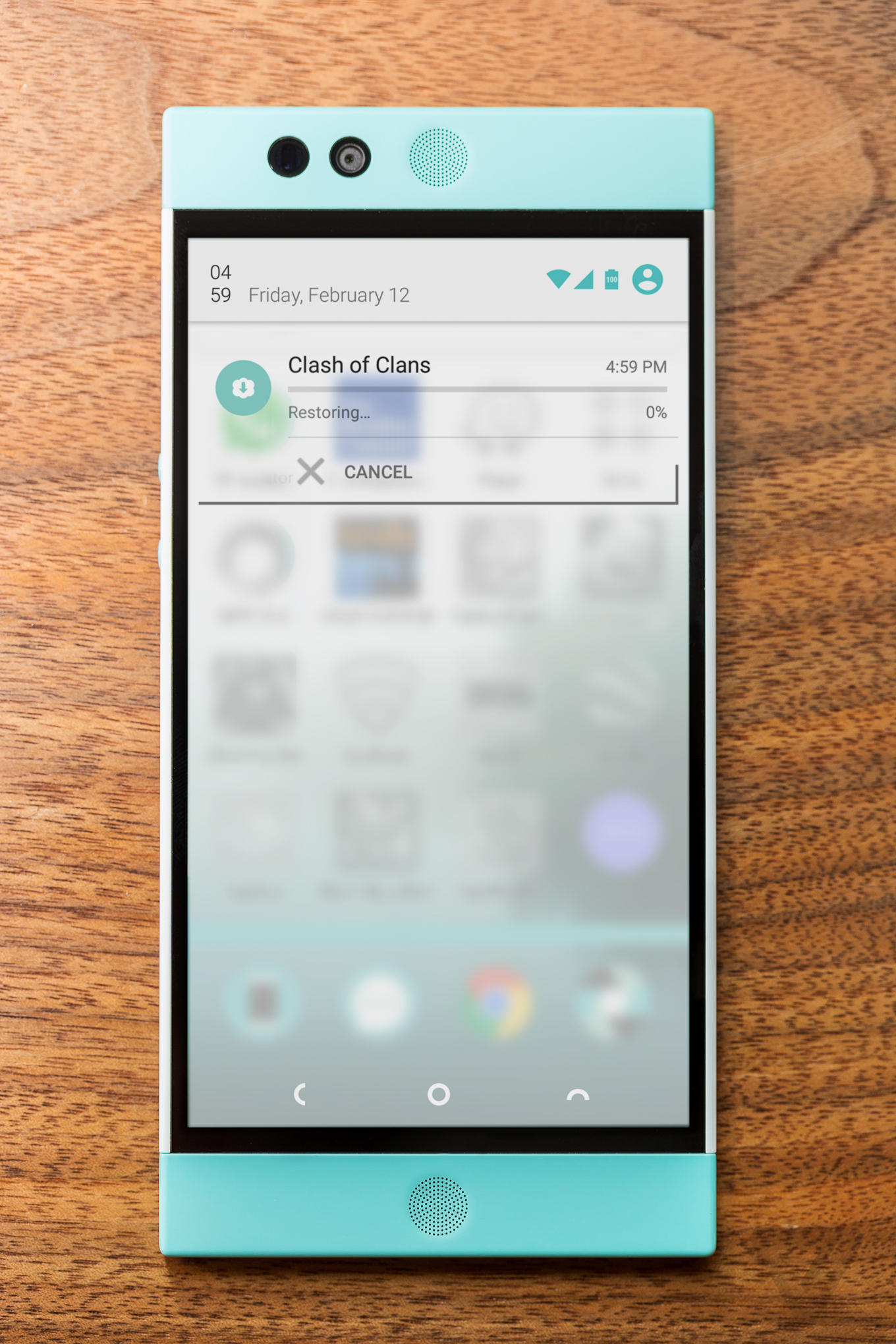 But all this happens automatically, without your intervention. You don't even need a data connection during an auto-archiving process. You only know this has happened because the icon for an archived app turns grey and unusable, and you won't be able to zoom in fully on a compressed photo.

If you want to restore an archived app, you just tap on it when you do have a data connection, Wi-Fi or cellular, and it gets restored from your cloud backup. It gradually fills in a progress bar that pops up below the icon and turns from grey back to its original color. But the system may then auto-archive a different app.

Compressed photos restore from their cloud backups when you try to zoom on them while on Wi-Fi. If you try to restore a photo over a cellular connection, it will prompt you to ask if you really want to use the data to get the full-sized version.

I watched the system archive apps numerous times and restored them, as well as photos, multiple times, without any problem.

You can even "pin" an app so it never auto-archives.

But there are some flaws in this system. For instance, the Robin doesn't auto-archive one of the biggest data hogs on phones: videos. Nextbit says this feature is coming. Also, under Google's rules, the standard Google suite of apps is "required" and can't be archived regardless of how large or little-used they are. So, even if you always use alternatives to the stock Gmail or Google music app, they will hang around taking up space.

The other notable thing about the Robin is its design. It's a square, thin plastic phone, but with a highly distinctive look. The 5.2-inch screen is capped at top and bottom by either a blue-green or very dark blue border area, each containing circular elements that soften the severe rectangle. The biggest circles on the front are round speakers, one at the top and one at the bottom. The sides and back are white, with the slightly depressed, side-mounted power button (which is also the fingerprint reader) and the raised volume buttons in the same color as the top and bottom pieces.

It's both strangely attractive but also juvenile looking

To me, it's both strangely attractive but also juvenile looking, like a phone for Barbie. In an informal poll I took on both coasts, most people were jarred by the design, partly because of the blue-green color of my test model. But others really liked it.

The phone is sold unlocked, directly by the company, not carriers. Currently, it only works with GSM carriers like AT&T and T-Mobile. In April, the company says it will have a version for CDMA carriers like Verizon and Sprint.

The company also boasts that the phone is highly customizable. It says: "We've made it as easy as possible for you to customize Robin. Its unlocked bootloader and open source drivers make it easy to load CyanogenMod or any other ROM you want and Robin will still be under warranty."

Battery life was okay, but not great. The synchronization to the cloud takes place only when plugged in, though restoring things from the cloud can be done on battery. But you're unlikely to do the latter very frequently. In my tests, the battery made it through a full day of moderate use, but with little margin.

Another design surprise awaits in the software. This phone doesn't try to put a heavy overlay over stock Android, but it does add its own touch. It pretty much banishes widgets, one of the big things that separate Android phones from iPhones. They're not exactly banned, but they live in their own translucent layer which must be summoned with a pinch or icon tap.

Also, the home screen is an app drawer, meaning it's meant to contain all your apps, rather than only showing some of them and tucking the rest away in a hidden area, as is common on Android.

The result is a home screen that looks an awful lot like an iPhone's: a series of rows of app icons and folders, with a fixed icon bar at the bottom.

A purple icon on each screen opens three alternate list views of your apps — archived apps, pinned apps, and all apps.

The Nextbit Robin does run the latest version of Android, Marshmallow. And the company says it is committed to supporting future major Android updates on the Robin for at least two years.

But its innards aren't the latest and costliest. In my test, it was responsive, but not really speedy. The fingerprint sensor, while accurate, showed a tiny but noticeable lag. The camera app opened too slowly. The phone had a lot of trouble logging into a hotel Wi-Fi system.

The camera took okay, but not great photos

I found that the 13-megapixel camera took okay, but not great, photos and videos. Whether in shots of snow in Maryland, or California beaches, photos often looked either too bright or too dark. One shot of the sparkling Pacific, drenched in sunlight, came out so dark you could never tell it was taken at 3 in the afternoon. An iPhone 6S I grabbed to take the same shot after seeing the Robin's result wasn't fooled.

Finally, Nextbit is a startup and might fail, be copied, or bought. But the company is backed by respectable venture funders and insists it plans to make more devices and grow.

If you buy phones on a limited budget, and find yourself struggling with cleaning out apps and data to make space, the Nextbit Robin is a perfect solution. Its smart management of local storage by harnessing the cloud is something that much bigger companies like Apple, Google and Samsung should have been doing already.