LG is just days away from revealing its latest G5 smartphone at Mobile World Congress. While details of the handset and its hardware add-ons and accessories have already been leaked, a new photo appears to show a removable battery add-on. The modular battery add-on is rumored to include a 1100mAh battery and physical buttons for various camera functions — zoom, flash, shutter release, etc.

The leaked photo was posted on a Chinese technology site, and it appears to show the box for the accessory with the add-on pictured. The Verge has previously confirmed that the G5's design features an accessory slot at the bottom, which would let users swap in modules. LG is expected to announce modules designed for photography and audio that will plug into the G5's "Magic Slot." The audio accessory is rumoured to be a partnership with Bang & Olufsen, and adds a DAC (digital to analog converter) to the G5 to improve its sound quality. LG is set to unveil its new G5 flagship at Mobile World Congress in Barcelona on Sunday. 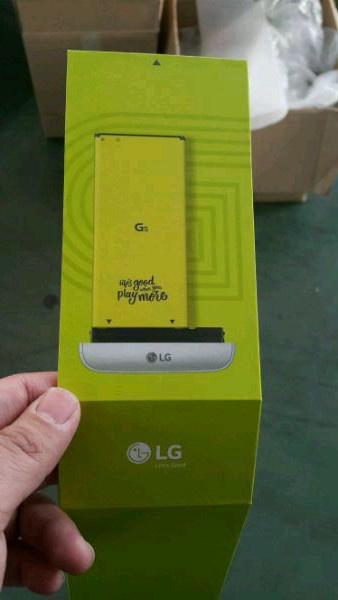