What if you took the XPS 13 and made it bigger?

Dell’s XPS 13 is the most exciting laptop in a long time. It’s the best 13-inch Windows laptop out there, but a lot of people want a bigger screen. While 15-inch laptops are some of the most popular on the market, if you want a larger laptop what options do you have?

As I searched for the best Windows laptop, I never really considered larger, more powerful, laptops because I’m not usually a fan of bigger devices. Dell’s new XPS 15 has tempted me to try a laptop that’s a little bigger than I’m used to. It combines the same sleek design and edge-to-edge display that Dell used in the XPS 13, but everything is just larger. Dell has squeezed a 15-inch laptop into the frame of a 14-inch one, and it’s really designed to be a more powerful alternative to the smaller XPS 13.

Dell’s latest XPS 15 is going up against laptops like Apple’s MacBook Pro Retina, with enough power to play some games, edit video, or use graphically intensive apps on the go. Over the years, I’ve settled on 13-inch laptops for their portability and weight, but I’ve been using the XPS 15 for the past few weeks, and it’s one of the most powerful machines I’ve used in years. It’s a beast. 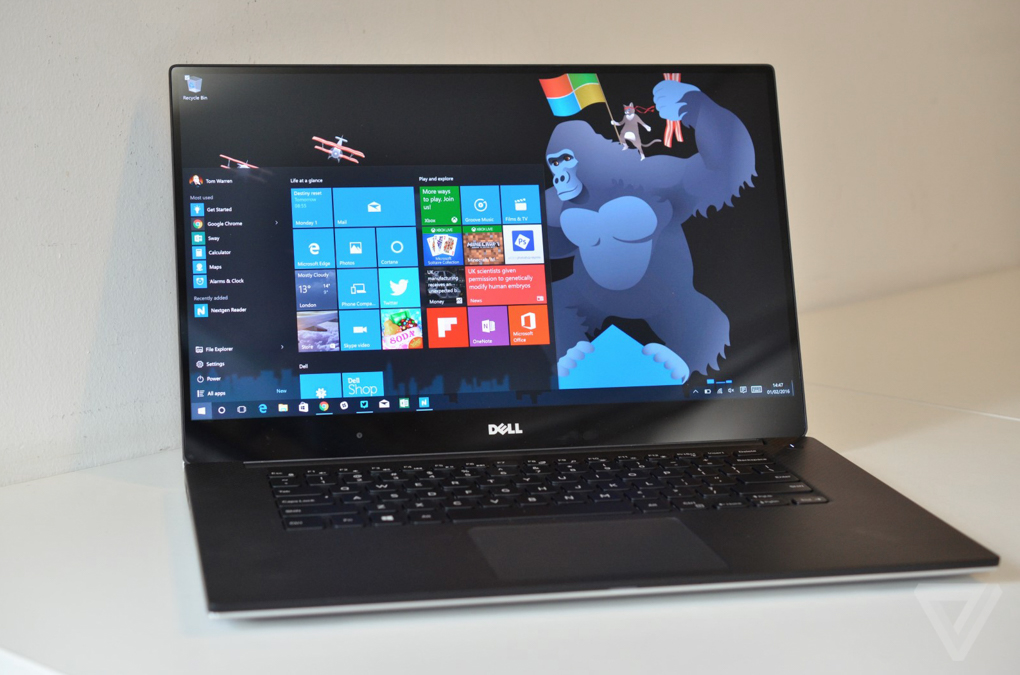 The XPS 15 looks like Dell took the XPS 13 and blew it up into a larger model. It’s almost identical on the outside, apart from the size and layout of the keyboard and trackpad. I love that Dell, for the most part, has stuck to the basics with the XPS 15. Just like the XPS 13, there’s no crazy hinge or flipping display, just a pure laptop. It’s refreshing, and it feels like a sturdy companion for all my work needs. 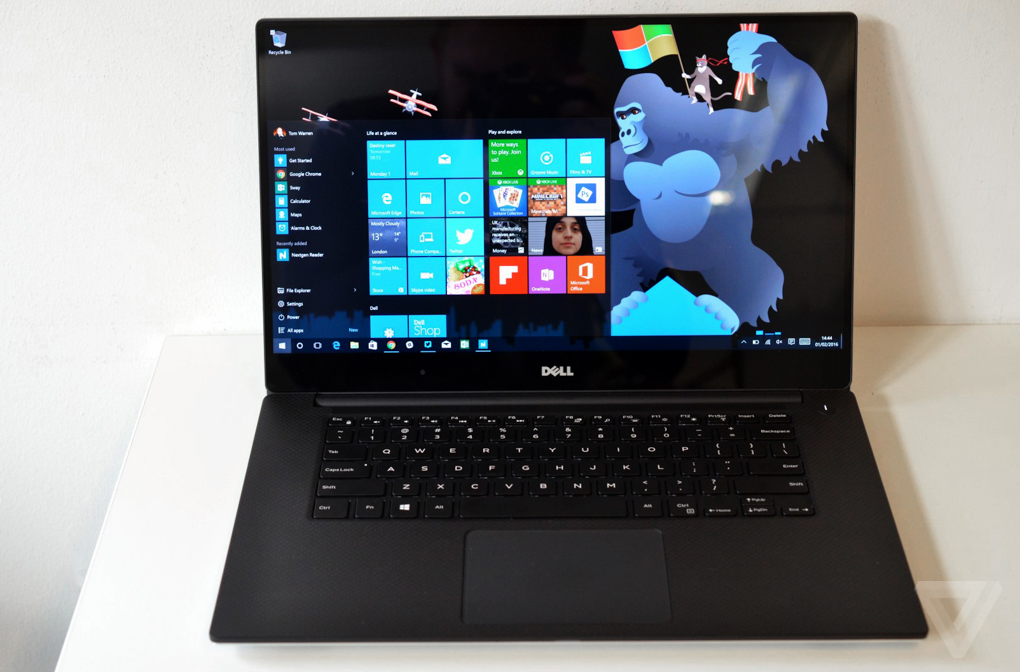 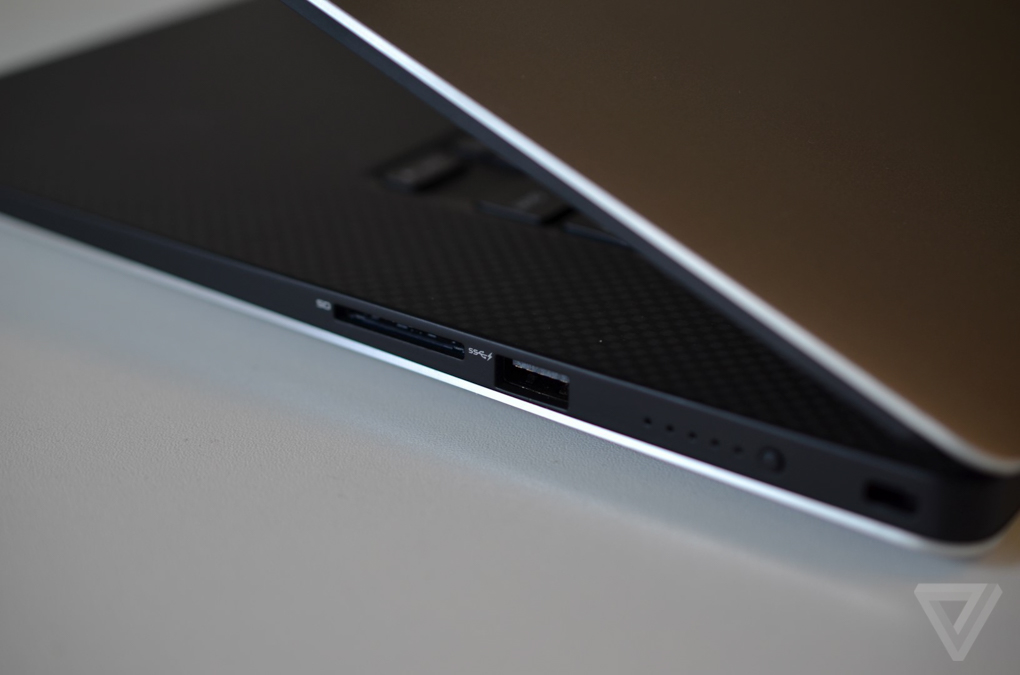 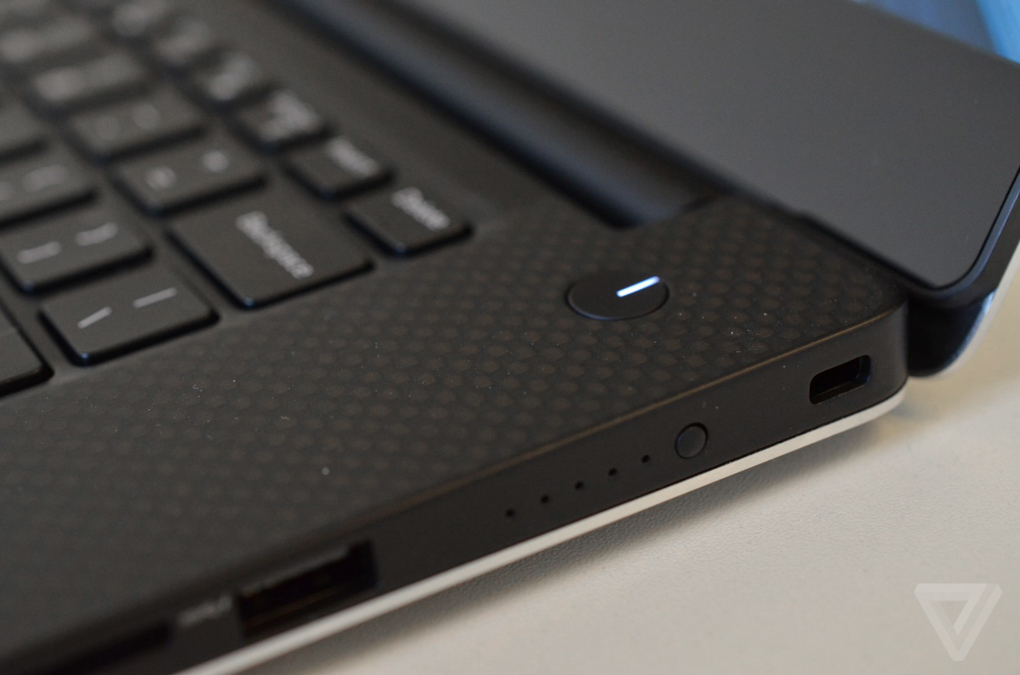 Dell has kept the combination of an aluminum finish and a wedge shape it used on the XPS 13. The real difference here is the bigger trackpad. Windows trackpads aren’t as bad as they used to be, but you still have to pick the right laptop, otherwise it’s very hit and miss. Dell improved its trackpad on the XPS 13, and it’s even better with the XPS 15. The slightly larger size helps a lot, and it feels like I can scroll forever on the glass pad. Dell’s soft finish makes it really comfortable to use, and I didn’t notice any weird cursor issues during my testing. I hope every laptop maker gets this right in 2016. Dell’s XPS 15 trackpad feels as big and smooth to use as Apple’s MacBook Pro Retina.

Unfortunately, I’m not a big fan of the keyboard on the XPS 15. It feels like it could be a little bigger given the extra space here, and the keys are a little mushy. I was hoping for something closer to Microsoft’s Surface Book keyboard.

Moving from a 13-inch laptop to a 15-inch model can be challenging, especially if you’re as used to smaller sizes as I am. The XPS 15 doesn’t fit inside my bag for a start, and its extra weight is definitely noticeable. It’s around the same weight and thickness as Apple’s MacBook Pro Retina, so it’s not exactly bulky or heavy compared to other 15-inch Windows machines. If you’re coming from a 13-inch laptop, be prepared for compromises like shifting around regularly when you use it on your lap because of the weight, or simply buying a new bag to carry it around. 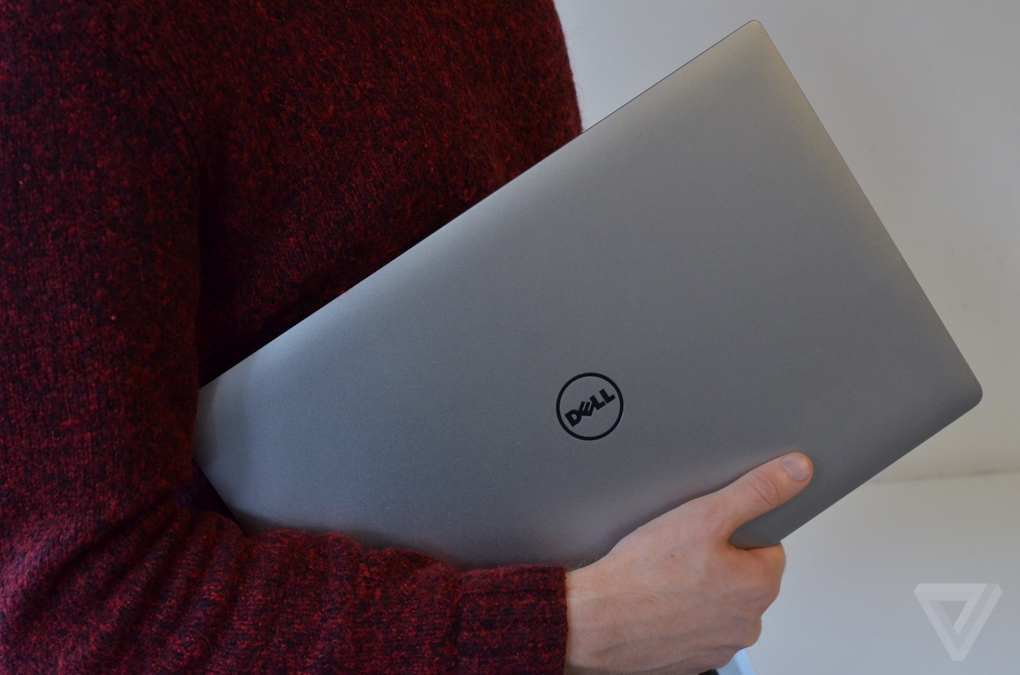 The model I’ve been testing has a 15.6-inch 4K touchscreen display (3840 x 2160), 16GB of RAM, and Intel’s latest Core i7 processor. It’s priced at a steep $2,229.99, but the base model starts at $999.99 with a 1080p display, 8GB of RAM, and an Intel Core i3 processor. Dell’s 4K edge-to-edge display is simply stunning on the XPS 15. I love the XPS 13’s display, but the larger, higher-res version on the XPS 15 looks even better. Viewing angles are solid, and color reproduction is really crisp. The upgraded display is a $450 option, and I think it’s worth it, but I really wish there was a matte option. I dislike glossy displays with a passion, and while this one is really nice, a matte finish would have really put it over the top.

The XPS 15 has every single port I need in a laptop. There are HDMI, USB, and USB Type-C ports on the left-hand side, and an SD card slot and USB port on the right-hand side. The addition of the Type-C (which doubles as Thunderbolt 3) means you can drive a lot of powerful accessories like external drives or monitors, and even charge the laptop through USB (warning: it will be slow compared to using Dell’s power brick). A lot of accessories will use Type-C this year, and the XPS 15 is ready for them.

This is one powerful laptop

Dell’s choice of ports on the XPS 15 are designed to complement what’s inside. This is a powerful laptop, and it shows. After using it for a few weeks, I don’t want to go back to using my desktop machine. It feels so fast, and I never had any performance problems using regular apps in Windows. As the XPS 15 is larger, it also includes discrete graphics processing from Nvidia. This isn’t a gaming laptop, and at 4K native resolution you’ll obviously have to run games at a much lower resolution, but it’s an option.

The XPS 15 uses the built-in Intel graphics card for most tasks, but once you start pushing into 3D apps or games, it switches over to Nvidia’s chip. Performance has been mixed for me using Nvidia’s graphics, but recent driver and BIOS updates have certainly helped. It will run most Steam titles well if you’re not concerned about maximum settings, but this is still designed as a laptop for powerful desktop apps and not games. If you want to use games and apps that really make use of the discrete graphics then make sure you’re connected to the power supply as it draws a lot of battery juice otherwise.

My experience with the XPS 15 hasn’t been problem-free, though. I’ve had some random bluescreens which haven’t filled me with confidence, and the amount of BIOS and driver updates shows that Intel, Nvidia, and Dell are still trying to perfect the right balance of performance, stability, and battery life here. If you’re spending $1,600 on a laptop, it’s reasonable to expect it not to bluescreen on you. I had similar bluescreen issues with the Surface Book, so I’m not sure if Microsoft, Intel, and Nvidia are still trying to figure out drivers and software for Windows 10. Either way, Windows 10 itself still feels a little unfinished in a lot of areas. Fortunately, Dell has added minimal bloatware so you don’t really have to deal with that on top of any Windows 10 bugs. 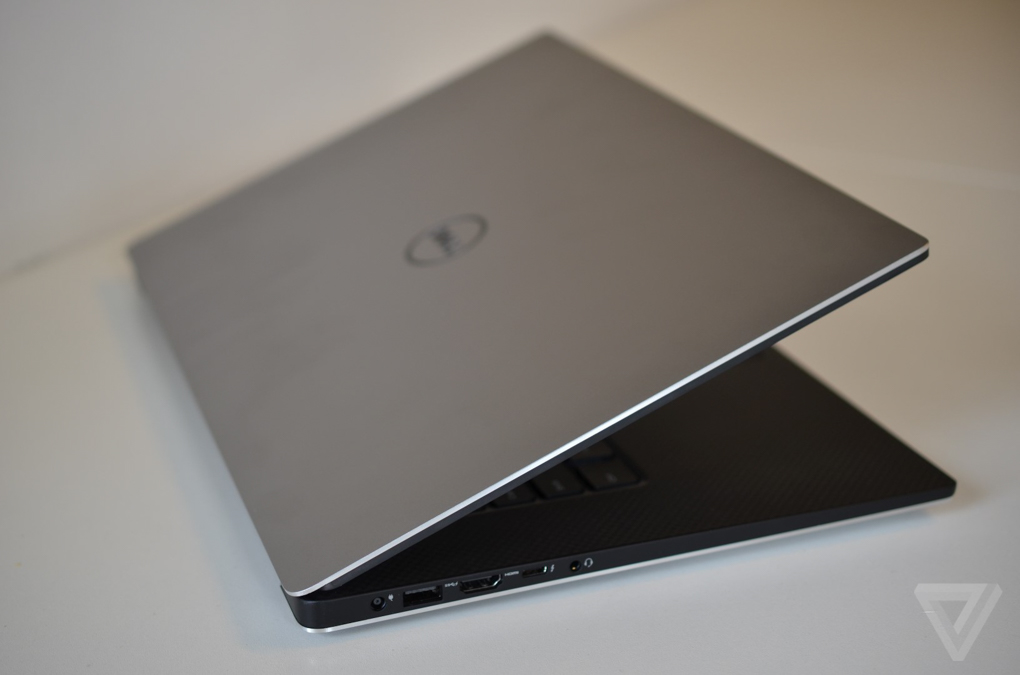 Battery life is going to vary depending on the XPS 15 configuration. My review unit has a solid state drive and comes with an 84Wh battery. If you go for the base $999 model, then it ships with a regular HDD and smaller, 56Wh battery. I’m not sure why Dell even offers an HDD option anymore, but you’ll definitely want the SSD for performance and the bigger battery. During The Verge Battery Test the XPS 15 lasted 6 hours and 30 minutes. During my daily use I’ve found the XPS 15 lasts between 5 and 6 hours before needing to be plugged in. That’s based on average use, without using the Nvidia graphics often. If you use the discrete graphics regularly, then expect battery life to be impacted even more. If you don’t opt for the 4K model, I’m confident battery life would be even better. Dell claims around 17 hours on the 1080p XPS 15, and I’ve found both the touch and non-touch variants of the XPS 13 have different battery life as a direct result of the different displays. Either way, I want more than 5 or 6 hours from a laptop in 2016.

During my few weeks with the XPS 15 I still found myself returning to my XPS 13. That’s not because the XPS 15 is bad, but mostly because of familiarity, weight, and the simple fact the XPS 13 fits in my bag. I haven’t been a fan of 15-inch laptops for a while now, and I don’t think the XPS 15 does much to change that for me personally.

But if you are a fan of larger laptops, this is still a really good 15-inch option. Dell made the best Windows laptop with the XPS 13, and now it has transferred all the good bits over to the XPS 15. It’s not perfect and has some of the same flaws of its smaller sibling, such as the weird webcam placement beneath the display. The slow HDD on the base units is also something that shouldn’t even be a footnote in 2016.

If you want to carry this around, just consider whether you really need the power vs. a 13-inch equivalent. If you’re comfortable with 15-inch laptops, then the XPS 15 is the one to get, but just make sure you balance out the choice of display and storage options against battery life and budget.

$999.00 at Dell
Most Popular
From our sponsor
Advertiser Content From