LG's G5 is a radical reinvention of the flagship Android smartphone

The beautiful G5 and its plug-in Friends have arrived

Today LG introduces its latest flagship Android smartphone, the G5. Launching alongside a raft of accessories and plug-in modules, the G5 will be defined in most people's eyes by its extras, but I think it will be one of the more memorable devices of MWC 2016 simply because it's a terrific phone in its own right.

The immediate reaction when picking up the G5 and inspecting its aluminum-clad body is that it looks and feels very much like a smaller version of Google's Nexus 6P. LG's fingerprint scanner is positioned in the same spot as the 6P's Nexus Imprint, and the G5's camera module also protrudes ever so slightly from the body. Both phones are housed in anodized aluminum and available in silver and gold colorways, and both have beautiful, high-resolution (2560 x 1440) displays. LG enjoys a couple of subtle advantages: with a 5.3-inch screen, the G5 has higher pixel density than the 6P or LG's 2015 flagship G4, and the new phone's unibody shell is undisturbed by any antenna lines. They are still there, but LG uses a process it calls micro-dizing to perfectly disguise the antennas.

Another small difference from the Nexus 6P is that the G5's power button is built into the fingerprint reader, which can be pressed in, unlike the touch-sensitive activation of the Nexus. But the big distinction between the two is that the G5 feels more comfortable and ergonomic. Anyone used to working with 5.7-inch devices like the 6P, LG's own V10, or Samsung's Galaxy Note 5 will instantly gravitate toward the smaller, easier to handle G5. Its size is close to perfect. I feel no loss of functionality because of the smaller display, yet enjoy a much easier time when navigating around the phone with just one hand. 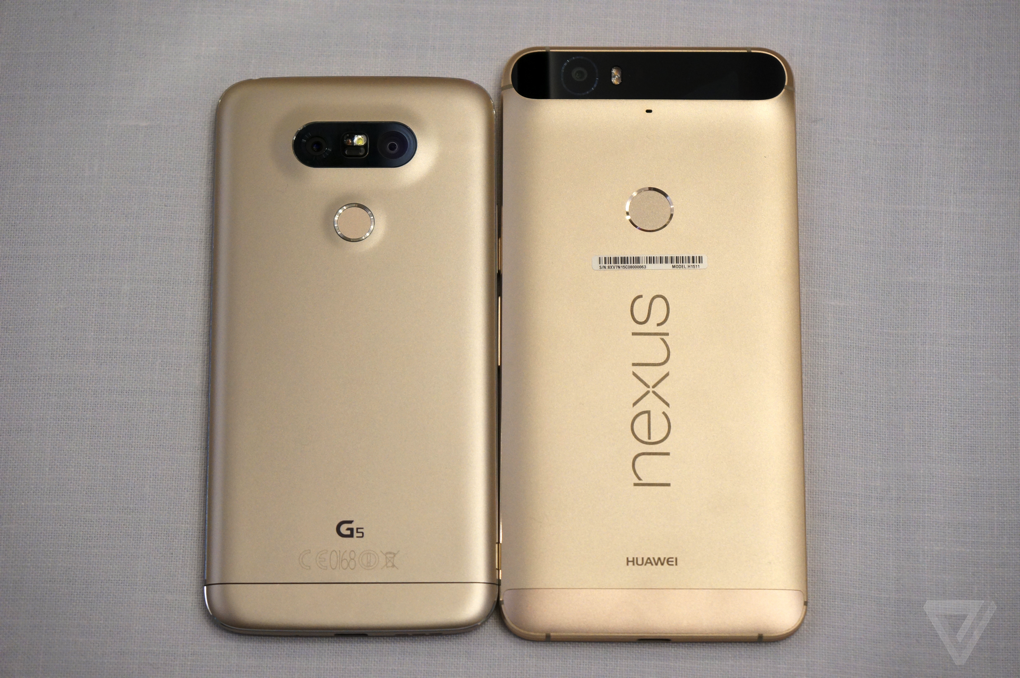 The G5's performance is, on the evidence of my brief time with it, excellent. Animations flow smoothly, the phone reacts immediately, and the camera is basically instantaneous. Credit for that goes to Qualcomm's new top-tier Snapdragon 820 chipset, which is accompanied by 4GB of RAM inside the G5. Speaking of the camera, LG now actually offers two of them on the back: a regular 16-megapixel imager and a 135-degree wide angle 8-megapixel camera. These can be used as individual shooters — with the latter offering a wider, more panoramic view to better capture grand architecture or sweeping vistas — or they can work together to create some fun combinations and layering. Switching between the two cameras is super quick, and together with LG's established strength in imaging and camera software, I feel very positively inclined toward this change. LG has added extra flexibility without making any design sacrifices. As to the G5's camera suite, LG is introducing nine new analog film filters, which have been tuned to emulate the subtle hallmarks of classic Kodak and Agfa film.

These are among the biggest software additions LG has made to the G5 — the company's actually taking something away with the latest version of its LG UX, which no longer comes with an app drawer. LG explains that decision as eliminating the confusion between removing an app shortcut (from the home screen) and uninstalling the app altogether (from the app drawer). Now it's a single-layer interface, which will prove more familiar to iPhone users as well as many Chinese Android phone owners.

"The mission of the G5 is to wake up your play instinct."

LG doesn't want to talk about specs too much with the LG G5. It has 32GB of onboard storage, a microSD expansion slot, USB-C, a removable 2,800mAh battery, a maximum thickness of 8mm, and 900 nits of display brightness. "If I’m here to just tell you about these numbers, you will not be excited," says LG Mobile planning chief Dr. Ramchan Woo. "The mission of the G5 is to wake up your play instinct." This is the point where he introduces the G5's extra modules, which LG calls its Friends. 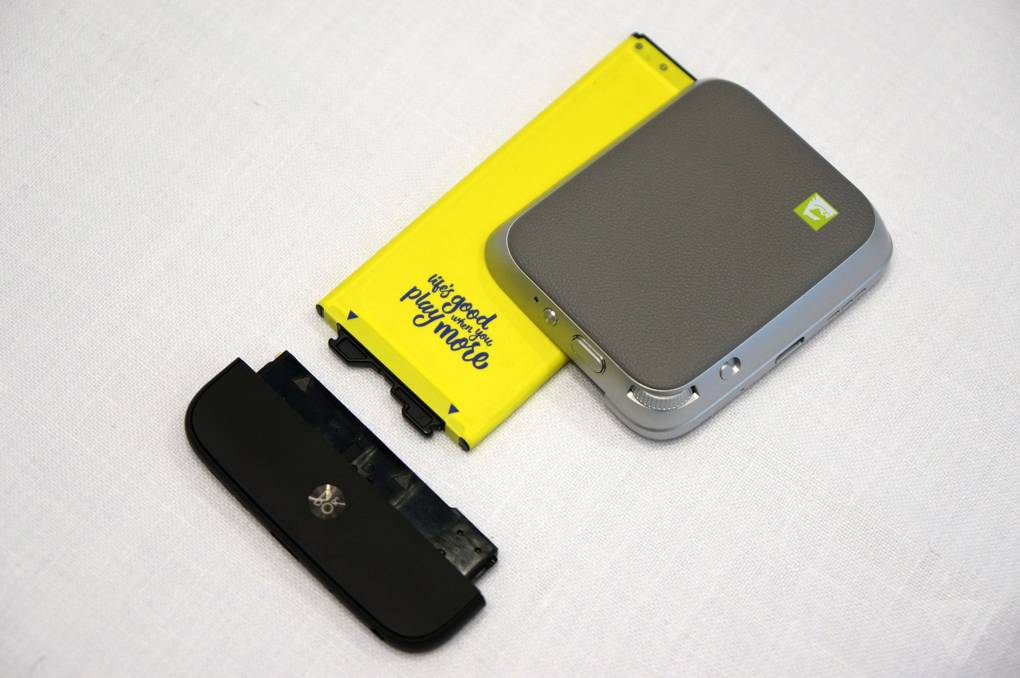 Two of these new accessories plug directly into the LG G5's bottom. A small key on the side of the phone pops open its lower section, which can be pulled out along with the battery, then the battery is fitted into the next module and that straps back into the phone. The whole process sounds finicky, but there's nothing flimsy about the way LG has constructed either the phone, its battery, or the extras, so everything can be done quickly and forcefully. And yes, it really does feel like loading a fresh clip into your gun.

The first plug-in module is the LG Cam Plus, which offers an enlarged camera grip for single-handed photography and also contains extra battery power. This Friend is decorated with a physical shutter button, a dedicated video recording key, an LED indicator, and a very satisfying jog dial to control zoom on the G5. You're still using the two cameras built into the phone itself, but this extra part essentially reshapes the device and gives it extra juice to keep going for 6 to 8 hours longer, expanding the battery from 2,800mAh to 4,000mAh. 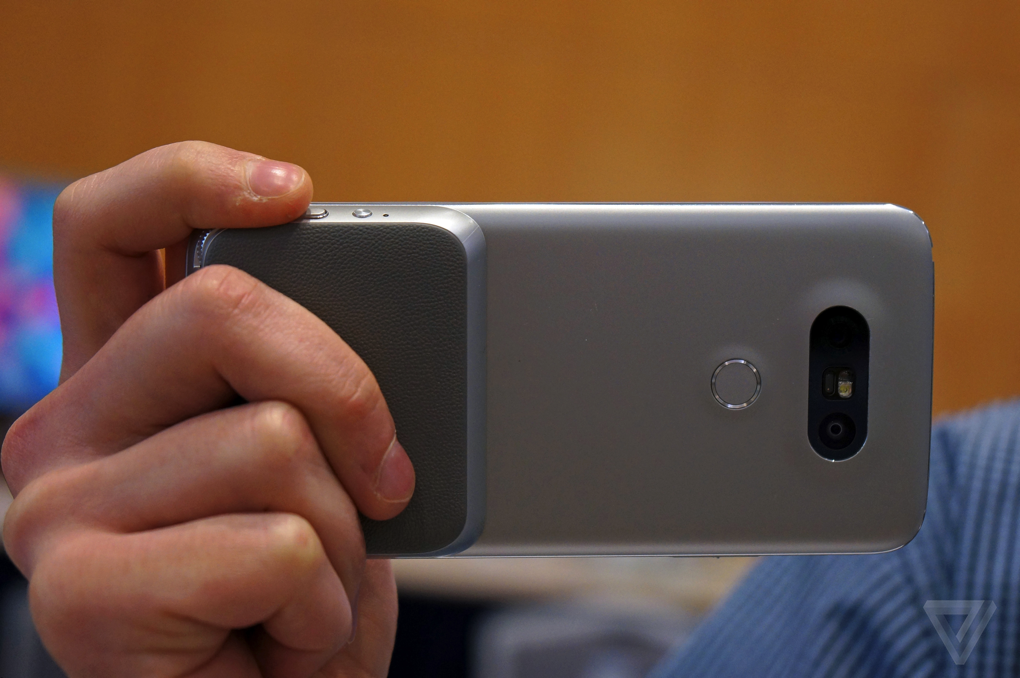 The LG Hi-Fi Plus is an external 32-bit DAC and amplifier combo unit, tuned in collaboration with Bang & Olufsen. It supports native DSD playback and will come with a pair of H3 B&O Play earphones. Unlike the Cam Plus, this module doesn't really affect the shape or ergonomics of the G5. It just makes it a little longer and breaks up its color synchronicity (the Hi-Fi Plus is a matte black, whereas the phones vary between silver, gold, pink, and a graphite shade that LG calls "titan"). Importantly, the Hi-Fi Plus will process and upsample content from any app producing sound on the phone, including YouTube clips.

Of course LG has a VR headset as well

Also making their debut today are the LG 360 Cam and LG 360 VR headset. The camera is a dual-sensor spherical camera that captures either 16-megapixel stills or up to 2K video and will have immediate support from YouTube 360 and Google Street View. The headset is the more intriguing part, as it marks LG's differentiation from the approaches taken so far: instead of ensconcing the smartphone inside a compartment like Google Cardboard or Gear VR, the LG 360 VR is a head-mounted display in its own right, connecting to the G5 via USB-C. The phone still does all the processing, feeding data to the dual 1.88-inch, 960 x 720 displays. LG collaborated with Google in designing this and will also have support from YouTube 360 and Cardboard right away. The big selling point here is that the 360 VR weighs only 100g and LG believes "you will not look nerdy and dumb" wearing it. 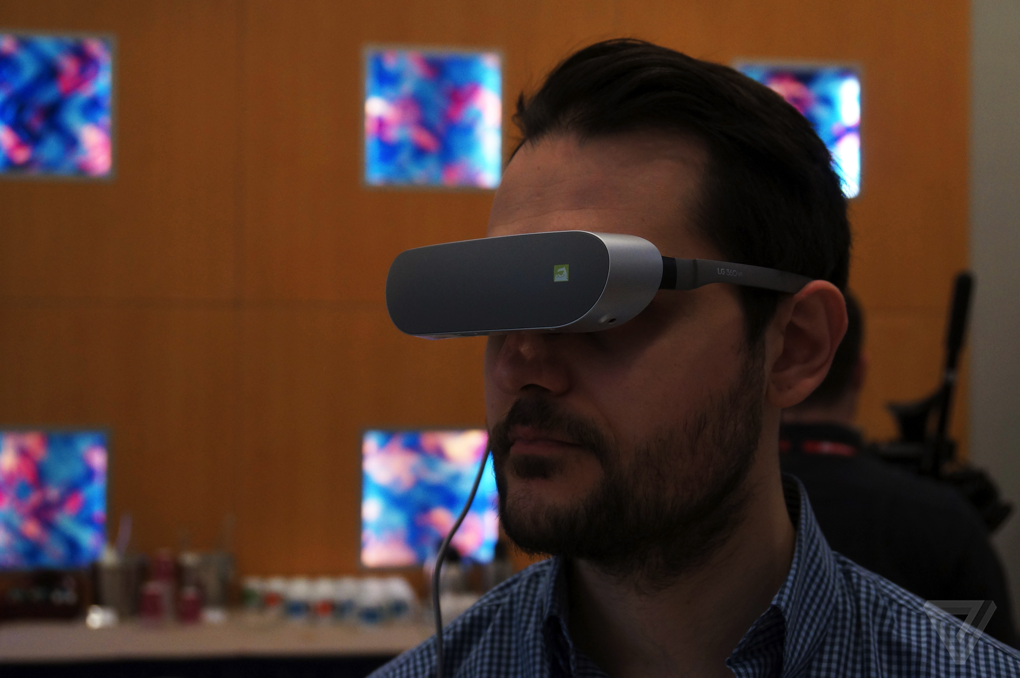 Rounding off the G5's Friends set is the LG Rolling Bot. This is LG's take on the Sphero ball, offering a toy bot that can be controlled via the phone and used for things like home monitoring and messing with your pets while you're away. With an integrated camera, speakers, microphone, and laser pointer, the Rolling Bot is pitched as both a fun gizmo and a practical way to exercise your pets (just have Snoopy chasing the laser for a quick lunchtime workout).

LG wants to build an entire ecosystem of these Friends accessories, with the premise being that anywhere you see the LG Play logo, you'll know that you have a device that requires zero setup. All Friends will automatically and seamlessly sync up with the G5. The big unanswered question about them, though, is the price. Dr. Woo would only say it will be "reasonable." Without knowing how much the external DAC and camera grip cost, we can't really judge if LG's Friends will be welcome add-ons or mere extravagances. The company itself is pretty cagey, saying only that the G5 will be "the standard bearer" for Friends, and future support will depend on how warmly they're received in the market.

There's no doubt that the G5 will be one of the biggest stories of this year's Mobile World Congress. It's full of the very latest technology — which includes a redesigned screen that allows LG to only partially turn on the backlight and thus offer an always-on notifications and time display — and it has a range of augmentations ready to plug in. But what continues to resonate with me is just how much better the G5 is relative to what LG has done before. There's a reason why I compare it against the best Android phone on the market, the Nexus 6P, and not LG's previous efforts. The G5 marks a major improvement for LG and bodes well for Android competition in the year ahead.

The LG G5 and its Friends will be available globally from the beginning of April.

Check out more from Mobile World Congress, including the debut of Samsung's S7 and S7 Edge: