Samsung is entering the nascent 360-degree imaging market with a new camera called the Gear 360. The camera was announced alongside the reveal of the Galaxy S7 and S7 Edge this evening at the company's Mobile World Congress event in Barcelona, and it will be available in the second quarter of this year.

The Gear 360 is a tiny, double-lensed sphere of a camera that's supposed to make shooting and sharing 360-degree photos and videos easy and approachable. (Let's just say it — it looks like an eyeball.) The bottom of the camera is flat, so it can rest on most surfaces, and it also features a standard tripod mount. The Gear 360 is mostly featureless on the outside, with just menu, record, and power buttons and a tiny monochrome PMOLED screen dotting the white plastic finish. There's also a slot for the microSD card (up to 128GB supported) and a swappable battery, both of which are hidden behind a small door. The camera is only splash-proof and dust resistant, though, so don't expect it to take a beating. 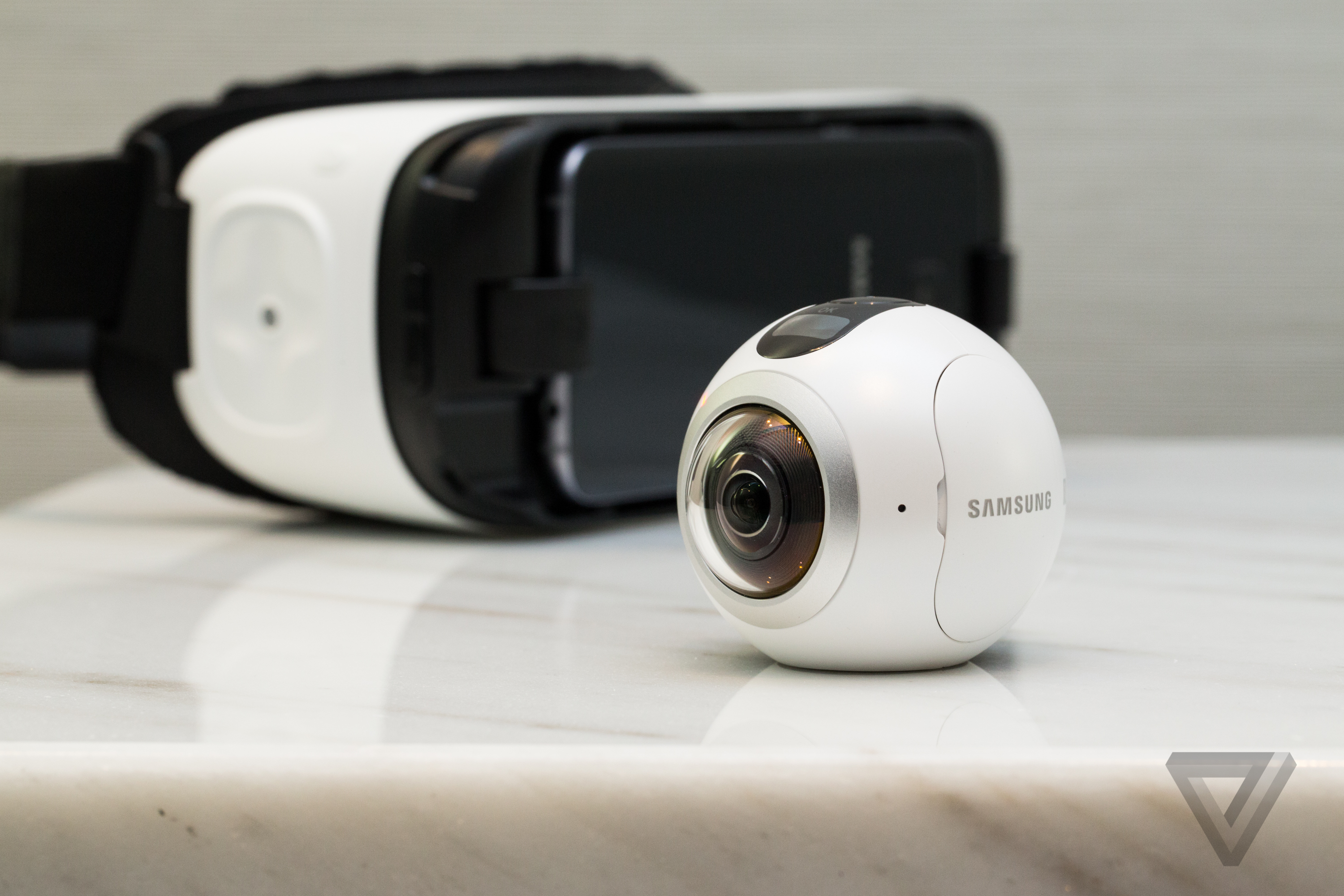 The internals of the Gear 360 work similarly to other dual-lens 360-degree cameras that are on (or are about to reach) the market. Each of the opposing f2.0 lenses has an extremely wide 195-degree field of view, and the resulting 15 degrees of overlap helps the software stitch the two images together.

Like most cameras that shoot in 360 degrees, you need to pull the files off the Gear 360 and use a companion app to do that stitching. The new Galaxy S7 and S7 Edge are the only phones that can do this with the Gear 360 right now — Samsung says the camera will also be compatible with "select Samsung smartphones," but the company wouldn't say which ones, or whether the Gear 360 will ever work with anything other than a Samsung phone. If you want a Gear 360 but don't own a Galaxy S7 or S7 Edge, you will be able to download a PC-only app to handle the stitching.

The image quality looks great for its size, but the stitching is still noticeable

Another similarity to cameras like the Ricoh Theta S is that the Gear 360's image stitching algorithm falls apart a bit when subjects get too close to the camera, something that was visible during a brief demo last week in New York. If the subject you're shooting is at least a few steps away from the camera, though, the stitching looks solid. 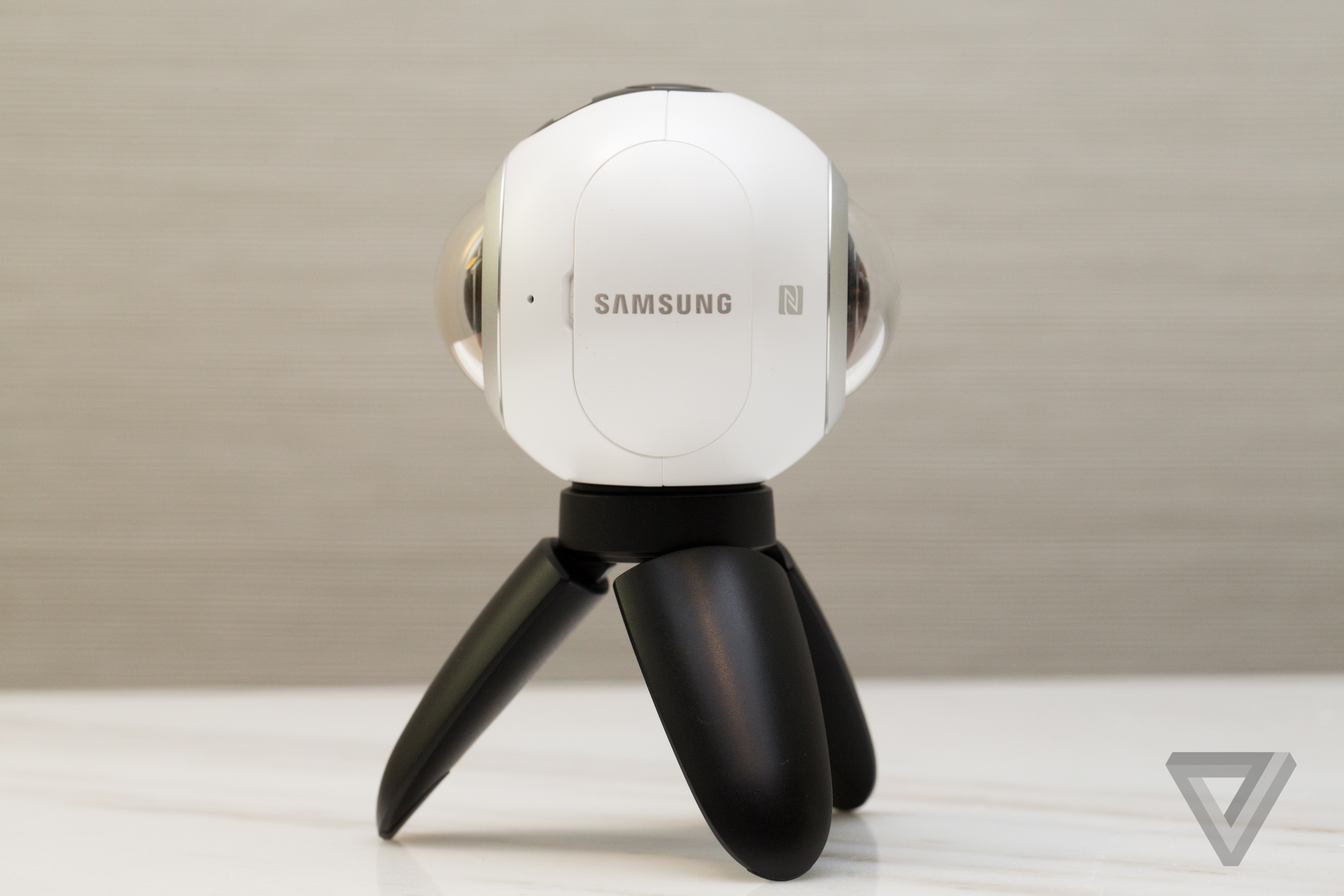 The rest of the picture looked quite good, too. The camera shoots 30-megapixel spherical photos and 3840 x 1920 video, and both looked clear when we viewed them on the S7 demo unit that we had a few minutes to play around with. One particular test video — footage shot by the Gear 360 from the top of a massive ski jump — even looked good inside of a GearVR. It's not on par with footage shot by professional rigs used by companies like NextVR or Jaunt, but it's a start.

The image quality of the Gear 360 will likely be more on par with (or slightly better than) that of the Theta S, but still worse than Nikon and GoPro's impending 360 cameras. Image quality is important when it comes to 360-degree video, but the format is so new that there's still some wiggle room. We still don't know which subjects make for the most compelling footage, what people want to see in 360 degrees, or whether they prefer viewing it through a headset or by clicking and dragging around in a browser.

Facebook and YouTube both embraced 360-degree content in 2015, but this small corner of the camera market is still looking for its first breakout star. And that could all change soon thanks to companies like Samsung, Nikon, GoPro, and even LG, which also announced its own 360 camera earlier today. More people will shoot 360-degree photos and footage this year than ever once these companies' cameras are on the market. How big a role the Gear 360 plays in that growth depends on pricing and additional compatibility — two things that Samsung is not sharing at the moment.

Check out more from Mobile World Congress, including the debut of Samsung's S7 and S7 Edge: