It was approaching 10:00 pm on a Wednesday, but dozens of people were crowded around several long wooden tables in the center of a cluttered workshop in Chelsea. Some stared intently at lines of code, others hunched over a soldering iron or sewing machine.

One evening a month, the Fixers Collective convenes at the Hack Manhattan workshop to repair busted phones, computers, and other gadgets brought to them by the stumped public. These Fixers are not paid professionals; they do this for fun. That night, by the time Carey Tan arrived, they had already seen broken reading glasses and an espresso maker that shorts the circuit. Tan, a fresh-faced and bubbly 30-year-old with a network-attached storage device under her arm, beelined for Vincent Lai, a member of the Fixers Collective, seated at the end of the table closest to the door.

“Save me, Obi-Wan Kenobi!” she cried as she placed the NAS on the table. She bought it a few months ago, but it recently stopped turning on. Immediately the problem draws other Fixers and they cluster around the device. Tan seems more excited than stressed about the issue.

They pass screwdrivers down the line and quickly disassemble the NAS’ plastic shell. Lai, tall, with an easy smile and hair that is more pepper than salt, plugs it in and applies a voltage tester to the motherboard. Power reads out, which means the most critical components of the device are in working order.

The Fixers agree the issue likely has to do with the device’s shell, so they use the screwdriver to mash the switch normally hidden under the external power button. After a few shaky seconds it flares to life and they cheer. But their elation doesn’t last. After reassembling the frame, they can’t get it to turn on again. The Fixers spend the next fifteen minutes attempting to replicate their earlier success, to no avail. Finally, stumped, they admit defeat.

The Fixers Collective was founded in 2008 by Tammy Pittman and David Mahfouda in the now-defunct Proteus Gowanus art space, in response to the Great Recession. Lai, who has been "handy" his whole life, joined their ranks in 2010, around the same time that Tan learned about fixing through the maker movement. 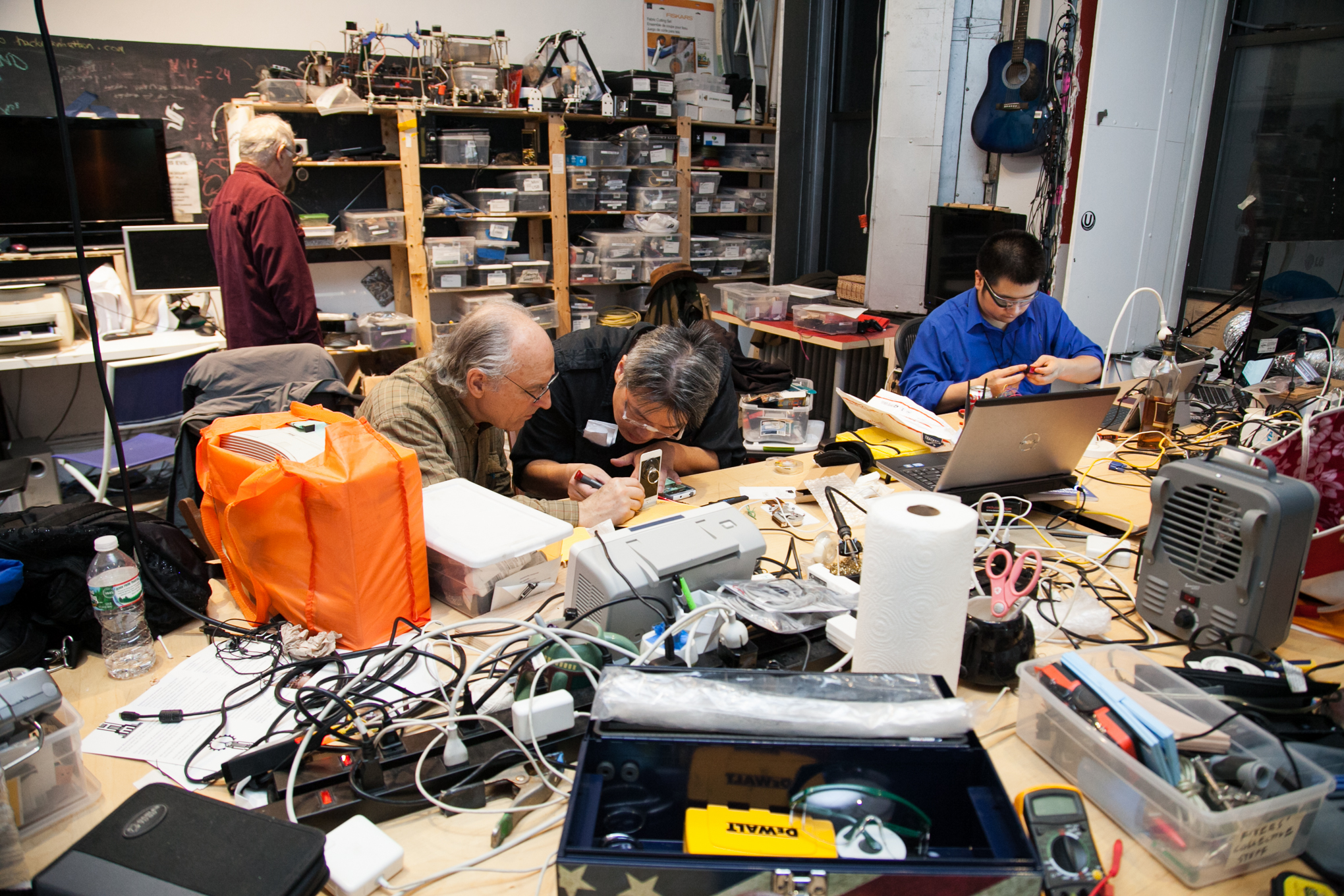 But the Collective was stepping into fraught territory. Professional repair work was on the wane, thanks to increasingly affordable electronics, aggressive copyright policies, proprietary designs, and business models built on encouraging frequent upgrades. Lai thinks a lot about how copyright legislation, lack of consumer education, and powerful marketing campaigns work to discourage the practice of repair. He’s not alone; with an uproar about Apple’s "Error 53" breaking iPhones that have had their Touch ID fixed by a third party, and the announcement of a repair-industry advocacy group, it seems others are finally taking note.

The primary weapon manufacturers wield to keep consumers running for the dumpster rather than the screwdriver is the Digital Millennium Copyright Act. Passed in 1998, its purpose was to bring copyright law into the digital era. Among other things, this law makes it illegal for owners and unauthorized repair people to break technical locks over copyrighted content, including software. Fixers have been fighting for exemptions to the DMCA, and in October 2015 the United States Copyright Office finally adopted a new set, making it legal to unlock carrier-activated phones, tablets, wearables, and mobile hotspots. Owners can also jailbreak phones, tablets, and smart TVs, and modify the software on 3D printers, cars, tractors, and heavy equipment. Nevertheless, software in many electronics, including game consoles, is still protected by the DMCA. At-home modifications or repairs can constitute a copyright violation. At the least, it will void a device’s warranty, but it potentially carries up to a $1,000,000 fine and 10 years in prison, and numerous researchers, hobbyists, and companies have been taken to court.

"Until maybe Error 53 we didn't think we were under serious threat."

Manufacturers can also prevent repair by tying hardware to operating systems. This issue sprang into the headlines recently with a flurry of outrage over Apple’s "Error 53." As reported by The Guardian, the error strikes when people who’ve had their home button repaired at unauthorized shops update the phone’s software. The error essentially bricks the phone, and owners must then pay out of pocket for a new one.

Apple says it’s a security measure designed to block fraudulent Touch ID sensors, but to others it looks like a way for Apple to lock out third parties. It reminds Wiens of how TV, PC, and finally digital camera repair shops died out when manufacturers began routinely restricting access to parts and service manuals.

"We’ve seen this kind of cycle, so the question is, are all the local cellphone repair shops next? Until maybe Error 53 we didn’t think they were under serious threat," he said. Apple announced that its latest iOS update will address the issue, unbricking affected phones. However, Touch ID capabilities will not be restored, for security reasons. 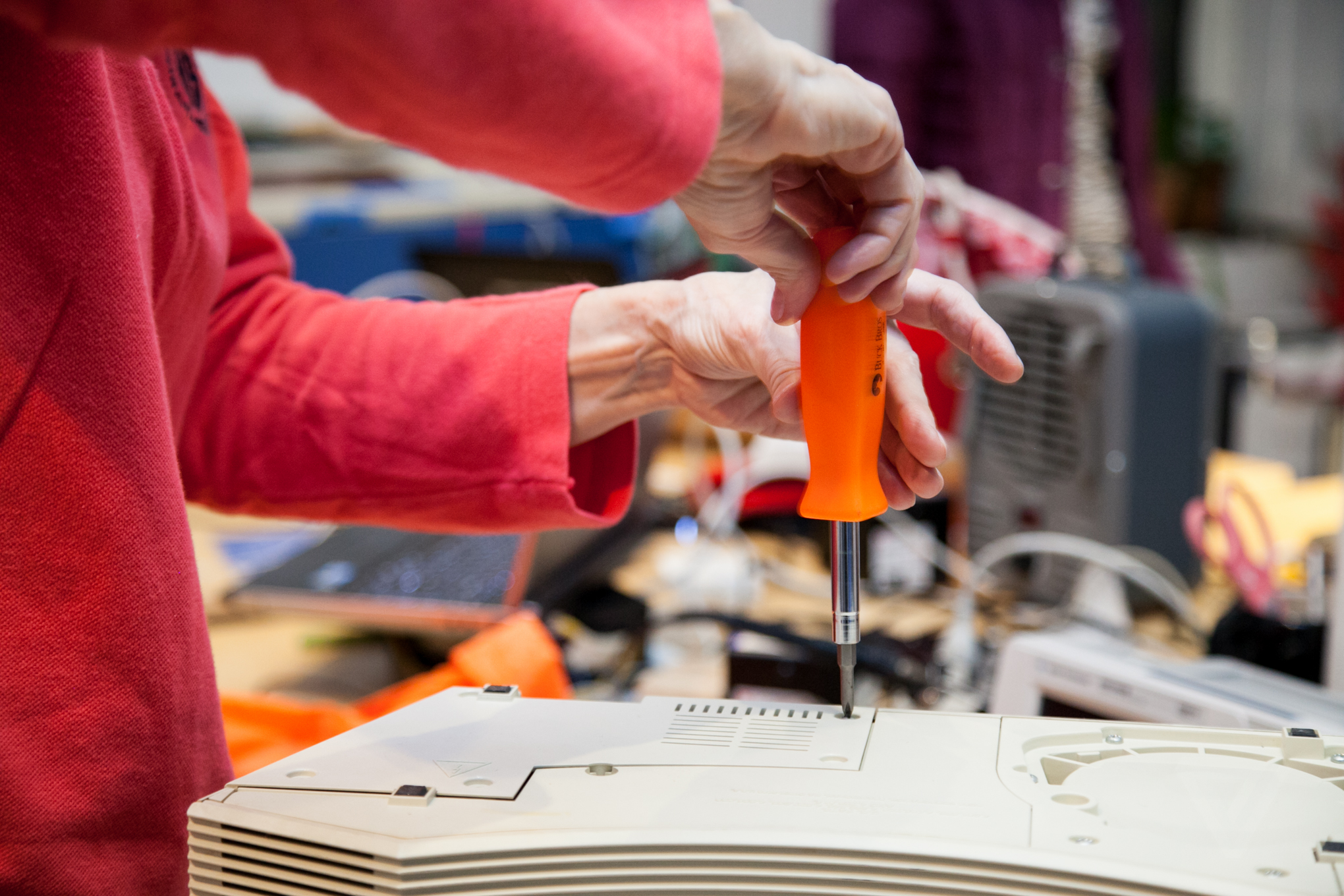 Even if it is legal to tinker with a device’s software, it can be challenging to repair its hardware without schematics or necessary parts, which are commonly released only to "authorized" technicians. While the facts in these manuals aren’t subject to copyright, the manuals themselves are considered creative work and, thus, copyrightable. The step-by-step setup that comes programmed into electronics has replaced service manuals of yore. Without education or parts, customers are forced to choose: pay a certified technician to fix the device, get a new one, or break the law.

While Big Copyright is a manufacturer’s first line of defense in keeping consumers from repairing devices, they back it up with a clear marketing message: it doesn’t matter if you have a device unless you have the newest one. Many companies, especially cellular carriers, now support this messaging with purchase plans that push shoppers into cycles of consumption and waste, like Sprint’s "iPhone Forever," which allows customers to trade in their phones annually at no additional cost.

Americans make 3.4 million tons of e-waste every year, more than the combined weight of every living blue whale

Our preference for buying new electronics rather than fixing old ones has severe consequences. Americans make 3.4 million tons of e-waste every year, more than the combined weight of every living blue whale. While recycling saves billions of cubic yards of landfill space annually and reduces demand for resources, it also produces pollution, especially when it comes to electronics.

"[Electronics recyclers are] hammering away the point of recycling — or what I’m gonna call shredding and destruction — as being so much better than putting stuff in the landfill," Lai said. "They’ve kept on this message for so long that people don’t quite see the idea that there’s still a lot of ways to go." A 2009 paper comparing cellphone reuse to recycling confirms this sentiment: Just 19 percent of a phone’s total content can be recycled, while the other 80 percent, including toxic heavy metals like lead and chromium, heads straight to landfills. 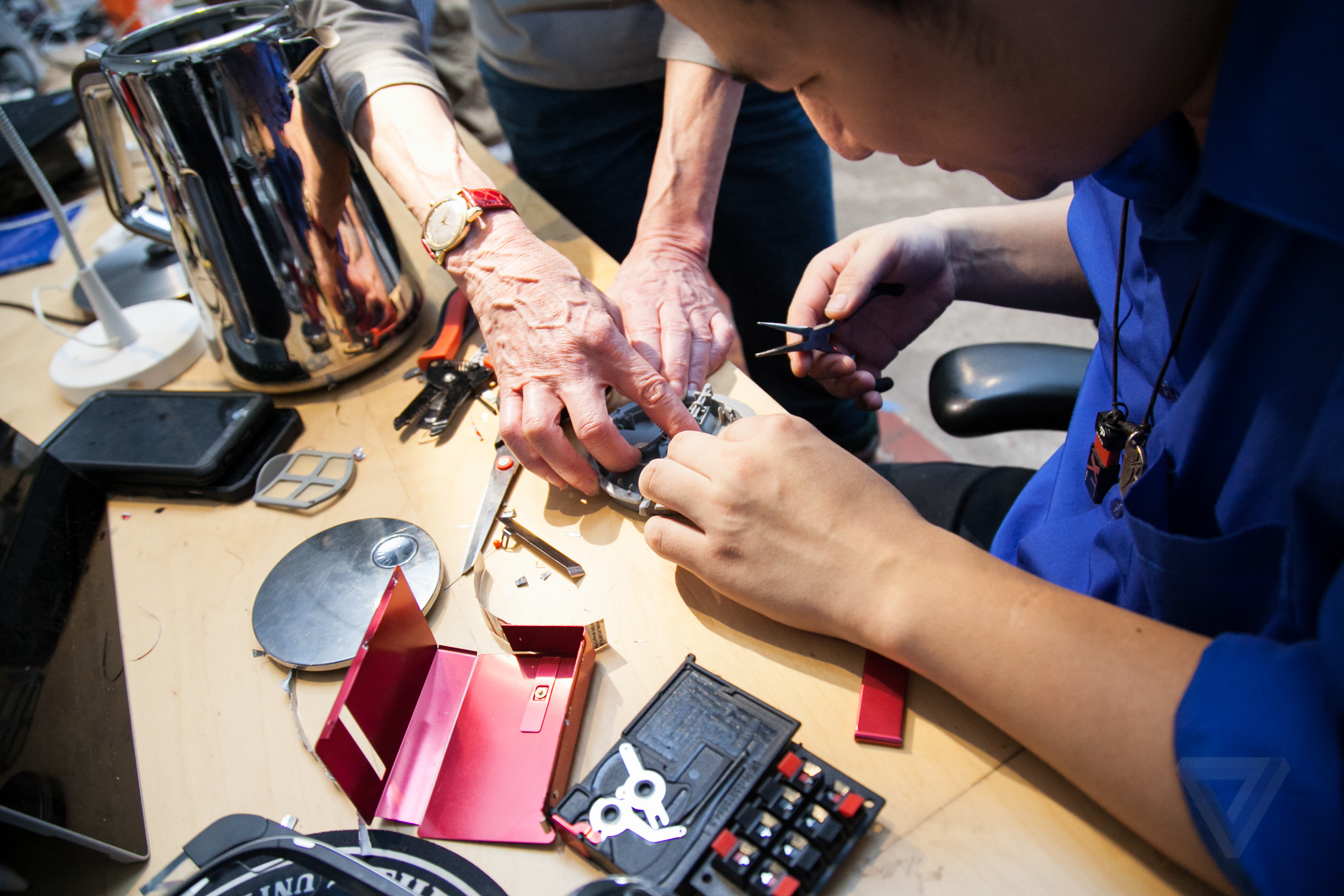 Concerned with the proliferation of planned obsolescence and mounting e-waste, the repair community is fighting back. With hands tied by the DMCA, fixers are creating entirely new manuals. Wiens’ iFixit regularly takes apart popular devices and writes step-by-step guides for consumers. And a booming market exists for YouTube videos that guide viewers through repairing everything from washers, to DVD players, refrigerators, and iPhone screens.

Tan, who works for CodeEd teaching girls to code, believes that education — "just showing people that they absolutely can do things that seem daunting now but are actually not as complicated as they think" — is one of the most powerful things groups like the Fixers Collective and iFixit can provide. Thanks to the skills she learned from fixers, she has repaired many devices, including a flat-screen TV and an HVAC unit.

Education won't be enough without legislation, which is why Lai and Wiens want a repair lobby

Nevertheless, education won’t be enough without legislation, which is why Lai and Wiens want a repair lobby. "This impacts everybody from folks like the Fixers Collective, to us, to small cellphone repair shops, even farmers trying to repair tractors," Wiens said.

The first lobbying success came from the automotive industry. After a groundbreaking Massachusetts law passed in 2012 led to a deal with automakers nationwide, independent mechanics were finally given access to proprietary diagnostic tools. Inspired by this, the Digital Right to Repair Coalition was formed from over 30 groups, including the Fixers Collective and iFixit, to advocate for other "fair repair" laws. In 2015, they introduced legislation in New York, Massachusetts, Minnesota, and Nebraska that would require manufacturers to provide device owners and independent repair shops with access to knowledge, software updates, and parts. The Coalition was narrowly focused on helping to pass legislation, but fixers felt that repair needed more than just a campaign.

Earlier this month, on February 2nd, 2016, the Digital Right to Repair Coalition rebranded as The Repair Association, an organization that includes fixers of cellphones, medical devices, and tractors, among others. The group "advocates nationally for a competitive repair market, as well as improvements to the quality and longevity of products," noted an announcement on iFixit. They are helping states with legislation, and have occasionally hired lobbyists for extra muscle. 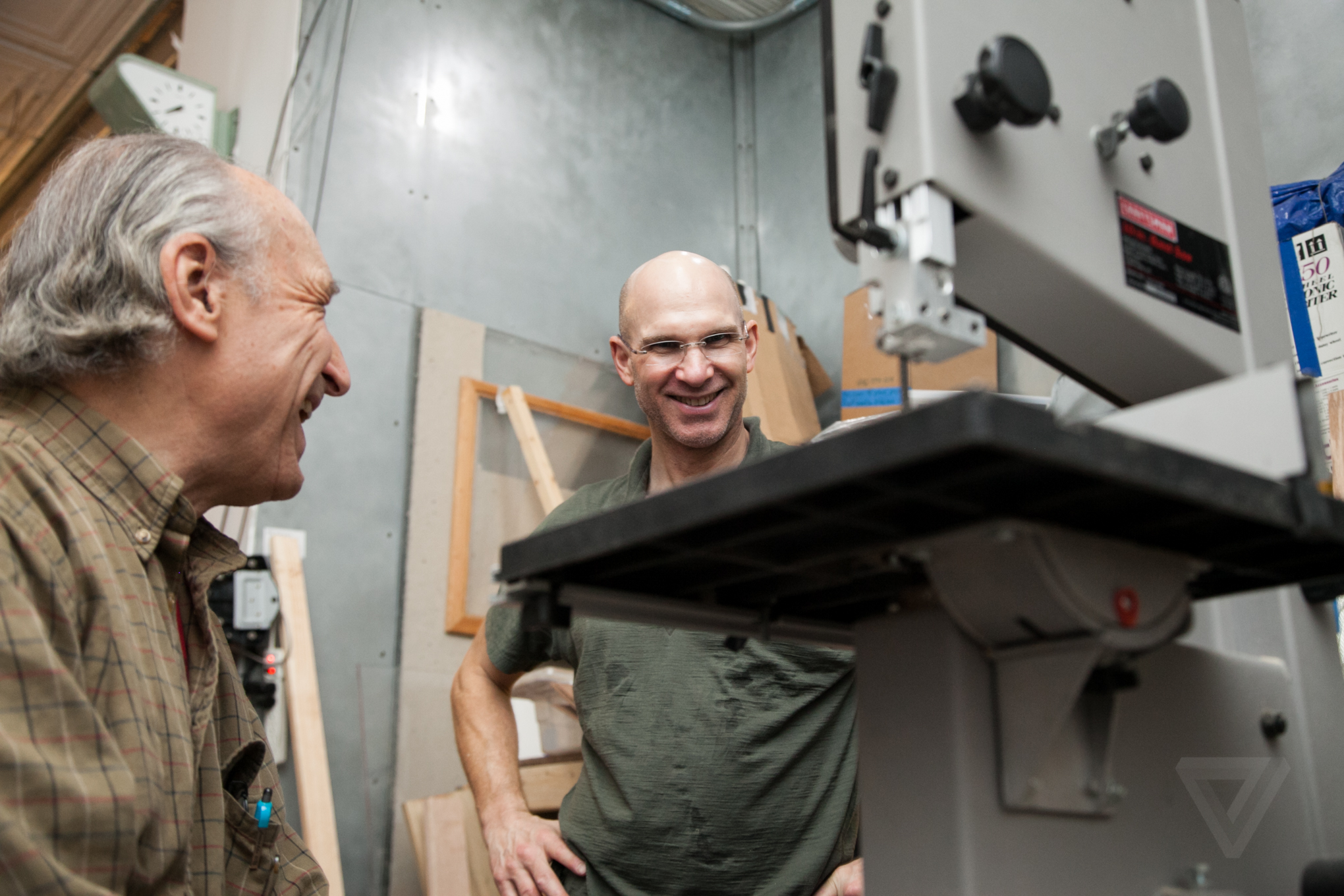 Despite existing hurdles, fixers believe their future is bright. In Europe, the first smartphone designed for DIY repair is available, and repair cafes are flourishing. Sure, some people will always choose the newest iPhone over a screwdriver. But interest in repair is growing.

Back at the Fixers Collective meeting the Monday before Thanksgiving, the space was packed. Wynn Levy, 55, a member of the Fixers Collective, had an iHome dissected and spread before him. It belongs to a friend of his, who was ready to throw it away when it stopped working. Levy determines that the motherboard isn’t getting power, and with the help of several other fixers, manages to solder a bridge over a broken circuit, connecting two functioning ones and restoring the board.

"It’s a thrill," he says, tightening the screws on the iHome’s reassembled case. "We opened it up, fixed it, saved this thing."