A modern touch to a classic gadget

Share All sharing options for: This smartwatch is the stylish way to keep a calendar on your wrist

One way to sell a smartwatch these days is by making the device smart in only one way. Whether it has basic fitness and sleep tracking or pings you with select smartphone notifications, the goal is to strip away almost everything in favor of a classic-looking timepiece with one or two neat features — and nothing else.

There’s no name for these gadgets. You could refer to them as feature watches or minimalist smartwatches if you’d like. But no matter what they're called, they exemplify the fact that smartwatch makers aren't adding too much value right now by throwing anything and everything at the wall and seeing what sticks. In fact, some tech-infused watches succeed not in spite of, but because of the features they leave out. That's the philosophy behind the latest creation from wearable startup What Watch. 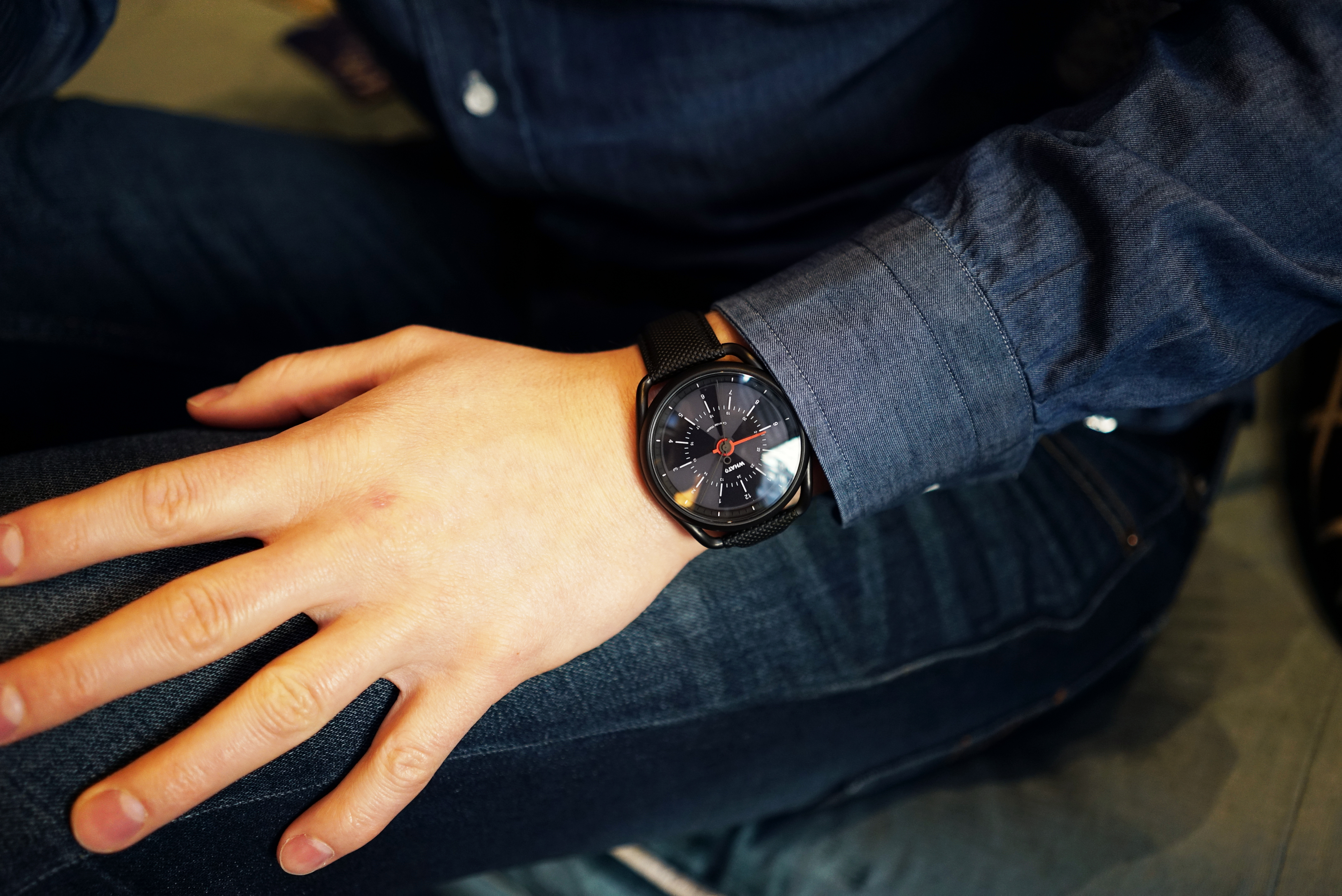 Plainly called Calendar Watch, the device has a static display that always shows the time, but segments of the watch face are blocked out to indicate when you have appointments. The watch syncs with a number of popular cloud calendar services including those from Apple, Google, Microsoft, Facebook, and Yahoo. From there, a companion mobile app automatically darkens the appropriate sections for meetings, lunches, and any other events you’ve put on your daily schedule.

The battery lasts around three weeks, and the device is always showing your next 12 hours-worth of meetings. The Calendar Watch will sync your calendar 48 hours in advance, in the event your phone dies, and it will switch time zones automatically as your phone does. It also has two modes, fixed and flexible, so you can either decide to show a distinct timespan, like 9AM to 5PM, or always show the next 12 hours on a rolling basis. It’s worth noting you can’t change any of the meeting times or delete items on the calendar from the watch.

"We did not want to duplicate the functions of the phone," says Igor Basargin, What Watch’s co-founder and CEO. "We thought it would be a good idea to have the calendar in a very intuitive form, integrated in between the actual hours in a style we’re familiar with." What Watch wants its newest device, which doesn’t contain any buttons whatsoever, to evoke the single-purpose appeal of an old-school Casio calculator watch. Having a minimal calendar on your wrist is not something you may use every hour of every day, but Basargin thinks a 12-hour glance ahead adds enough value by being there when you need it.

It may be a niche product, but What Watch’s good-looking gadget is not a bad idea. The smartwatch market tends to be filled with lackluster devices trying to do everything all at once, and yet those gadgets still fail to provide enough value to become must-have devices for most smartphone owners. As my colleague Walt Mossberg wrote last month, the smartwatch "isn't smart enough to be essential, to feel like a natural part of daily life." Until that happens, perhaps years from now, companies like What Watch have ample room to provide products appealing to a subset of watch and technology enthusiasts.

What Watch is only a 15-person startup spread out between the US, Austria, and Japan. But the company has a history of rethinking the smartwatch at a time when Apple, Samsung, and other tech giants continue to try and dominate the category with do-all wearables. Last fall, What Watch released its first watch, which was essentially meant to help you build a digital diary or journal by capturing timestamps with a button on the watch. The companion app would save it and let you add a photo to remember the moment. It’s a "little bit less technical" than the calendar function says Basargin. "It’s quite poetic."

What Watch has experience with niche accessories

This time around, the company is targeting a more tech-savvy crowd and doing so through Kickstarter. Starting today, you can back the Calendar Watch to receive a device in white, blue, or black. What Watch is offering each color in limited batches starting at €160 ($176) and scaling up until it hits a retail price of €350 ($386). The delivery estimate is September 2016.

Given the company’s experience manufacturing and delivering a product in the past without crowdfunding, Basargin says his team is already cooking up stretch goal rewards for the campaign. Early ideas include a version of the watch designed for women — What Watch chose to launch with a larger "men’s" model, Basargin says — and new features like the ability to sync timed reminders to the watch face.

What Watch is asking for €95,000 (or nearly $105,000) for its campaign, and that involves signing up more than a few hundred people willing to give its low-key wearable a shot. Yet Basargin is confident his calendar-centric smartwatch will resound with consumers, at least those craving a new timepiece with just a touch of technology. "The approach is a little bit different," he says, "but we love it."

Now iFixit has genuine repair parts for Google Pixels, from the 2 to the 6 Pro