Far Cry Primal is an incredible idea. You take the basic structure of a Far Cry game — with its huge, unpredictable open world filled with dangerous animals, weapon-wielding enemies, and plentiful natural resources — and then you set it in prehistoric times. Those gun-toting soldiers become club-swinging rival tribes. Elephants become mammoths. Your sniper rifle is replaced with a bow-and-arrow. There’s a lot of potential there, especially around the idea of survival; in Primal you won’t just stumble across a machine gun or a cache of grenades, instead you have to build weapons yourself, using the wood, stone, leaves, and animals around you.

Ultimately though, Primal ends up feeling too much like, well, a Far Cry game. The really cool parts — the focus on surviving the elements, and a new feature that lets you tame beasts like mammoths and bears — is largely hidden behind a structure that has you fighting other humans and overtaking new territory. That can still be a lot of fun, and the new time period keeps the familiar formula at least a bit fresh. But Primal also feels like a wasted opportunity that probably would’ve been better off without the Far Cry name and all of the baggage that comes with it. 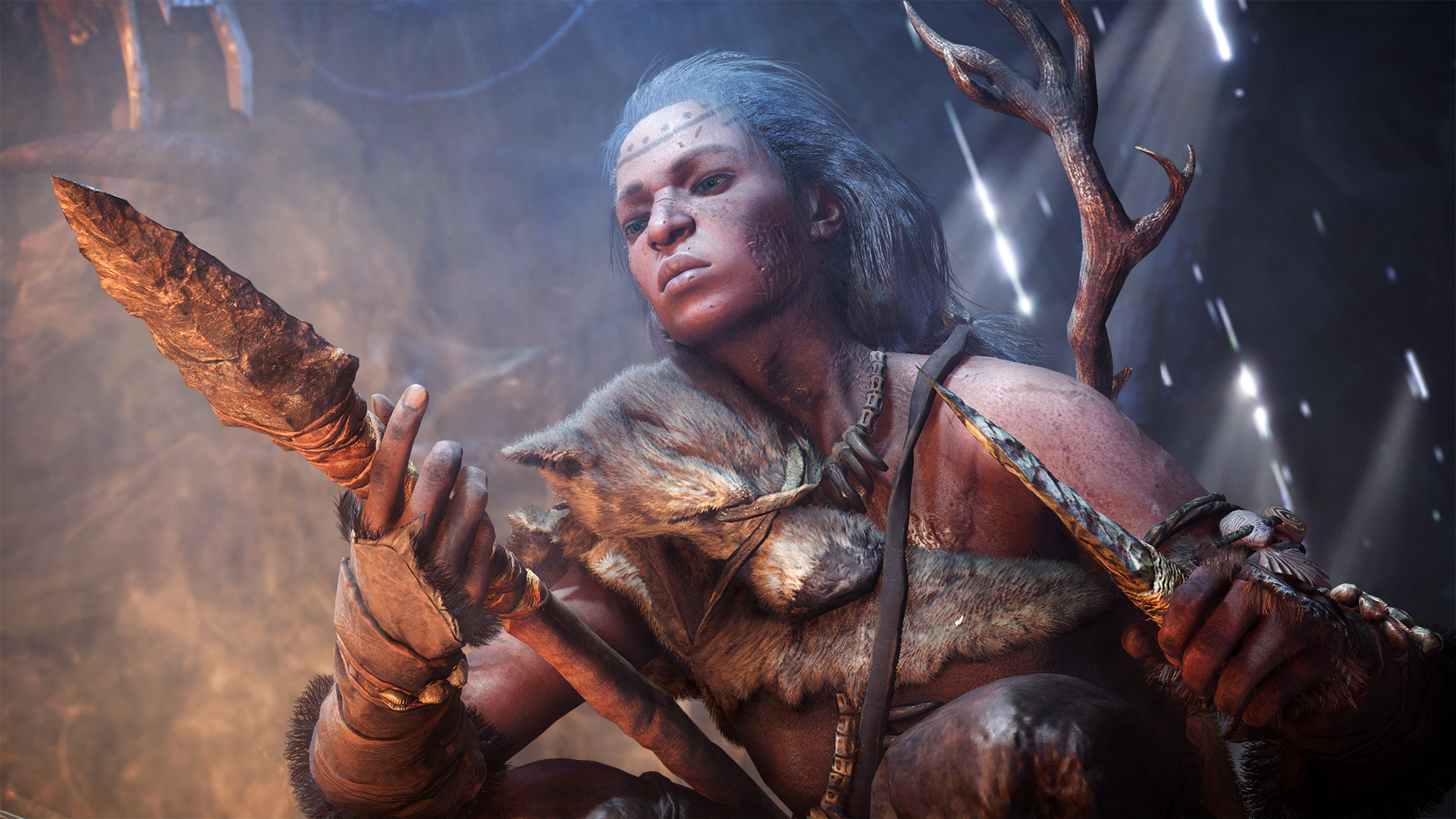 Primal puts you in the role of a hunter named Takkar, a member of a displaced tribe of prehistoric people called the Wenja. They live in an idyllic land called Oros, filled with mountains and rivers and wildlife, but one that’s also home to a much more violent (and cannibalistic) group intent on killing every last Wenja, for some reason. Your job is to reunite your tribe, who are now scattered around, running scared. You also have to eliminate the threat, which you do by clubbing a lot of cavemen and burning a lot of villages.

The world feels vibrant and alive

Like all Far Cry games, though, the story, for all its bombast, plays second fiddle to the exploration. Oros is a place that seems vibrant and alive. If you crouch in the grass you can watch wolves chase deer, and huge ancient elk graze calmly through the woods. You might even catch a glimpse of an alligator snapping at a poor mammoth that just wants a drink of water.

The grandeur includes more than animals. There are dewy valleys and sharp cliffsides. The land is full of resources like wood and stone that are of much greater importance than in other games in the series. In Primal crafting isn’t an optional side activity, it’s a thing you need to do to survive. If you want a new spear or club, you’ll have to make your own, and if you have to heal you’ll need to kill a boar for some tasty meat. Want something a little stronger? Find a green leaf to wrap that raw meat, and make yourself a prehistoric burrito.

What can be crafted expands as your character levels up and you explore more of the world, getting access to new crafting materials. This creates a satisfying loop as you keep pushing forward into new areas so that you can learn new skills and acquire new items to help you push even farther. During my time in Oros, I never really struggled to survive — outside of the first few hours of the game, I pretty much always had what I needed — but there’s still something satisfying about crafting useful tools from real-world materials, even if it’s in a virtual world.

This set-up also makes you feel like less of a psychopath when it comes to the animals. Instead of just killing animals for fun — which you can still do, if that’s your thing — here it feels like it has a purpose, because those creatures have things you need. Animal fat helps you make torches, while wolf skins will keep you warm in the snowy mountains. It also just feels more fair to hunt an animal with a bow-and-arrow as opposed to a missile launcher like in other Far Cry games.

The best addition to the formula in Primal is the ability to tame certain animals so that they will help you out. There are a dozen or so tameable creatures, ranging from small badgers and wolves to giant bears and saber tooth cats, and once tamed, they’ll stick by your side for as long as you want. Having a ferocious beast walking alongside you into an enemy camp feels pretty badass, and some of the animals have side benefits as well, like helping you skin downed animals. Some will even let you ride them. I spent a good chunk of the early game with a huge white wolf by my side, and I felt like Jon Snow in Game of Thrones. You can also do things like this.

The problem with Primal is the people. There are just too many. Far Cry games are about territory; the more land you conquer the more powerful you become. It’s no different in Primal; in fact, it’s exactly the same. Instead of capturing radio towers, you’re capturing giant bonfires. Instead of defeating military camps, you’re taking out tribal settlements. It feels identical to past Far Cry games, except that it’s not as much fun. Removing modern weapons works for the most part in Primal, but it makes the act of fighting other people a lot less exciting. There’s only so much clubbing of cavemen I can handle. You can still have some fun with it by sending in your bear to do your dirty work, but ultimately most of the battles boil down to you running up to bad guys and hitting them with a blunt or pointed object. And there are a lot of battles, so it’s something you can’t really get away from.

Far Cry games are about territory

In fact, even if you want to avoid the story and just explore the natural world, you can’t help but run into other people constantly. Enemy hunters, in groups of two or three, are surprisingly abundant, and you’ll regularly find hapless Wenja tied up and in need of rescuing. These moments are tedious; you feel less like the savior of your people and more like a parent whose children won’t leave them alone for a second. You just need a moment of peace sometimes. There have been multiple occasions when I’ve spent a long time silently stalking a rare creature, only for a screaming cannibal to ruin things by running in the way.

Primal is still fun in the way that the series is known for; those unpredictable moments when you accidentally light a field on fire, or when you charge into an enemy camp riding on the back of an angry mammoth. But unless you’re new to Far Cry, you can’t help but feel that you’ve done most of this before, only with a machine gun in your hands. There’s the potential for an exciting game about surviving an ancient world, but instead it mostly just feels like Far Cry 4 with a new visual style.

Far Cry Primal is available now on Xbox One and PS4; a PC version is launching on March 1st