Asus ZenFone Zoom review: do you really need a zoom lens in your smartphone?

There's potential for zoom lenses on phones — just not this one

Share All sharing options for: Asus ZenFone Zoom review: do you really need a zoom lens in your smartphone?

Do you need a zoom lens on your phone? For years, consumers have been more than satisfied with the default focal length of iPhones and Android handsets. It’s a wide — but not too wide — view that feels very natural. And for those times when you absolutely must get closer to your subject (and your feet can’t get you there), digital zoom has been a last-ditch option. Sure, it’s cheating — your camera isn’t really zooming so much as cropping — and the results often look bad. But most of the time we’re just posting this stuff on Instagram anyway, and you’re probably doing even more zooming and cropping there. So we’ve come this far without any real cries for phone makers to bring over the true optical zoom offered by point-and-shoot cameras and DSLRs. But Asus went ahead and did it anyway with the $399 ZenFone Zoom.

The ZenFone Zoom has been a long time coming, actually; it was announced at CES 2015, but is only now making its way to the US. Asus earned some positive buzz around its ZenFone 2 last year, an Intel-powered Android phone that was impressive considering its very appealing price. And it’s still available now; the ZenFone Zoom is less a sequel than it is a more refined alternative to the 2.

On the outside, this is definitely Asus’ most premium smartphone yet thanks to the machined aluminum sides and the leather rear cover. The back of the phone is dominated by the camera, which is designed in a way that’s very, very reminiscent of the Lumia 1020 thanks to the plastic circle surrounding it. Pull the rear shell off and you’ve got access to the SIM tray and microSD slot.

Inside the Zoom is the same Intel chip found in the top-end ZenFone 2 and 4GB of RAM. The screen has also stayed the same at 5.5 inches and 1080p. As for software, it’s all pretty much carried over from other Asus phones — there’s plenty of garbage bloatware, but the phone runs smoothly most of the time. It’s a fine performer if you take the time to disable a dozen or so useless apps, install a new launcher, or customize Asus’ Android skin to your liking. (There are plenty of ways to do this, from setting new themes and icon packs to changing the home screen animations.) But this phone is all about the camera, so let’s not waste any more time on the other stuff.

The design looks and feels great, as does the dedicated camera button

But this phone is all about the camera, so let’s not waste any more time on the other stuff. The Zoom uses a Hoya-designed lens, and seeing as Hoya is known for making glass filters that protect other lenses, this is a little unexpected. Inside is a 13-megapixel Panasonic sensor behind a variable f/2.7-4.8 aperture lens — also weird to see in a smartphone. It’s got optical image stabilization to assist with your shaky hands (and those close-zoomed shots), and there’s also laser autofocus, which LG and Huawei have recently made standard in their phones. The best external feature of the camera is definitely its dedicated shutter button, located on the lower right of the phone. It feels great and does its job well: it’s tactile, super clicky, and works just like you’d expect. You hold it down halfway to focus and push fully to snap a photo. Just to the left of the shutter button is another button that takes you straight to video recording. But video is nothing special on the ZenFone Zoom; it doesn’t even do 4K. In 2016, and on a phone that bets everything on its camera, that’s pretty inexcusable.

If you're calling it a camera phone, the camera needs to be better than this

I wish I could say that things turn around once you start taking photos, but they really don’t. After months of using the Galaxy Note 5 and the Nexus 6P as my Android phones of choice, the ZenFone Zoom just can’t compete. But it’s not just $600 and $800 phones that the ZenFone loses to. Hold it up next to the Moto X Pure Edition, which costs exactly the same, and it falls short again. Every shot I take with this phone looks a little too hazy and artifacted. It’s very "oh, a phone took that picture." Asus throws the sink at you as far as shooting modes go, including a nicely-done manual option. But the only thing I really ever use manual for is fixing white balance in dire situations. Most of the time I — and probably you — just stick to using auto, and it’s here where the Zoom failed to produce a single "wow" picture. Some software things get annoying, like constantly being pestered to activate the low light mode (even when just shooting outside on a gray day) and the ZenFone Zoom can also be slow at actually capturing pictures.

As for the optical zoom, in some ways it’s cool. You use the volume buttons to zoom in and out, which feels really natural when holding the phone. And if you look closely at the lens, you can see everything moving around inside. But real optical zoom comes at the cost of speed; zooming in and out with the volume buttons is always going to be slower than pinching part of your screen and cropping in with digital zoom.

Plus, I’m just not convinced 3x magnification really opens any new doors. There’s slightly more definition compared to just using digital zoom on some other phone, but the photos themselves really don’t look better because of it. Again, this is likely because of the lens’ variable aperture — it’s just not pulling in as much light as other phones when you zoom in. I’ll take the Note 5 or Moto X every time. And Samsung is a company that’s actually tried this sort of thing before; the 2014 Galaxy K Zoom put an extending lens with 10x optical zoom inside. Doing so made the device look more camera than phone, so it was just too big and awkward for most. Still, it was at least unique. With the ZenFone Zoom, Asus tries to ride the middle line. The company talks up the fact that its lens is all self-contained in the body, but there’s no good reason to fear the camera hump anymore, so they could’ve pushed things a bit further. Maybe if the pictures looked better in general, I’d be more forgiving. But they don’t.

So at the end of the day, the ZenFone Zoom doesn’t really live up to its promise. We’ve entered a new era of Android cameras where most flagships can take phenomenal shots that stand up to anything an iPhone can do. But the Zoom simply doesn’t fit in that class. If you’re going to call something a camera smartphone nowadays, it damn sure better deliver. Perhaps hobbled by its $399 price, Asus missed the mark. This isn’t a terrible smartphone; it’s got a nice build, decent screen, and fast performance, but there are other "not terrible" phones I’d buy first — including the Moto X Pure Edition, and even the ZenFone 2.

Our review of Asus ZenFone Zoom 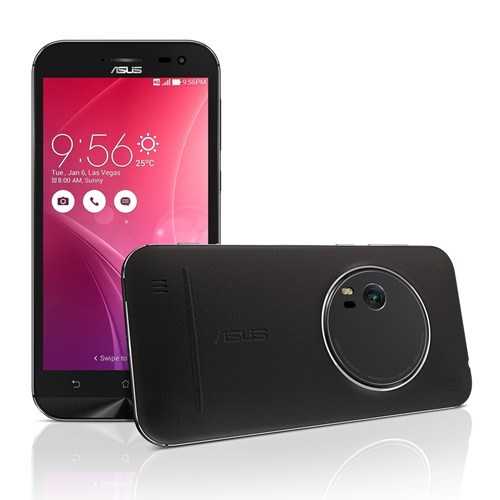