The helmet has come a long way, but there's still a lot of room for improvement

There's no such thing as a concussion-proof football helmet — most experts agree on that. But today’s helmets aren’t doing as much as they could to help football’s concussion epidemic. Right now, the standard helmet is mostly designed to prevent skull fractures and cushion players against direct, linear hits. They do almost nothing for the hits that twist players’ heads violently. In fact, the helmet may partly make those kind of hits worse.

The need for better helmets is becoming even more pressing: a growing body of research shows that repeated concussions and impacts come with serious risks. The brains of many former football players have shown signs of neurodegenerative disease. The effects of this condition can include debilitating symptoms, such as memory loss, erratic behavior, impaired judgment, and depression. The head needs even more protection than originally thought.

Today's standard football helmet has two primary layers: a hard polycarbonate outer shell and an inner layer of padding, usually made of foam. The harder layer is to protect the skull, while the cushioning is meant to absorb hits. But helmets often fit snugly on the head; this type of design is crucial for some aspects of protection. It can also be dangerous when hits to the side of the helmet — called rotational hits — occur, twisting the wearer’s head along with the helmet. These rotational hits are at least as dangerous as direct hits — and a few studies suggest they may be worse.

There’s another way that helmets themselves may be partly to blame for football’s concussion woes, some experts say. Without helmets, players instinctively protect their heads. But with gear, athletes feel less vulnerable and are more willing to hit with their heads or smash other people’s. Yet the alternative of not having helmets is much worse: in football’s early years, players wore very little protection; as a result, many athletes sustained skull fractures and bleeding inside the skull. The helmet has to stay. So is it possible to design helmets that actually protect players from all types of hits?

Some companies are trying. A few say that adding on padding is the answer, while a new company called Vicis has completely reworked the inner structure of the helmet. But because these designs are new, there isn’t much evidence they actually protect against concussions.

The brain has its own internal cushioning system; it's called cerebrospinal fluid, and it surrounds the gelatinous brain inside the skull, acting like padding between tissue and bone. But when the head accelerates rapidly or stops suddenly — usually due to some kind of forceful impact — the fluid isn't enough. That’s when concussions happen. "The brain is like custard floating in the skull, so when the skull stops suddenly and the brain moves forward, the brain can hit the skull," says Barry Kosofsky, a neurologist at Weill Cornell Medicine. If the hit results in a temporary change in brain function, that's considered a concussion.

Padding helps weaken the force of head collisions the same way airbags do: by slowing acceleration. But helmets are a much harder engineering task. Airbags have a few feet to slow down a person's fall. Helmets only have a couple inches of padding to absorb the speed of a blow.

When football helmets were only geared toward preventing skull fractures, they didn’t use as much padding. But as concussions became more of a concern, the helmets got bigger; the current idea is that the larger the helmet, the more cushion that can be added to absorb acceleration. This is supported by some tests — but helmet size is ultimately constrained for two reasons. First, the heavier and bulkier they become, the harder it is for players to move their heads. And bigger objects make for easier targets to hit on the field. 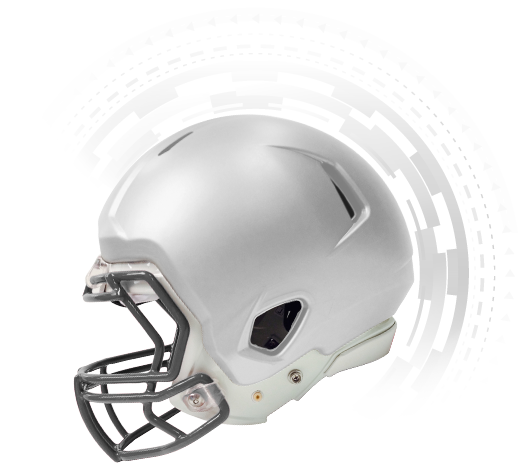 A football helmet fitted with the ProTech cap. (Defend Your Head)

That's why some companies are trying to put even more cushion onto existing helmet sizes. Businesses like ProTech and Guardian Caps have manufactured add-on cushions that can be fitted over the outside of current helmet models. "We're attacking the force outside the helmet where it occurs first. It’s receiving that impact fast, then it’s dispersing that force and slowing down the G force," says John Roman, CEO of Defend Your Head, which manufacturers the ProTech.

Padding does nothing for the hits that rotate players’ heads

Stefan Duma, a biomechanical engineer and concussion expert at Virginia Tech University, agrees that there are some protective benefits to this padding, but he cautions that there isn't enough research to conclusively say that the cushions lower concussion risk. And he has concerns over covering up the polycarbonate shell. "There is an advantage to having a very slick and rigid exterior surface. Right now, if you have two helmets hit, they slide off each other," he says. But the caps could provide more friction, causing the helmets to catch on one another when they hit. That could transfer more forces to the neck, Duma argues.

There is also an even bigger concern that cushioning can’t address. Padding only absorbs the accelerations from linear impacts — the straight-on direct hits to a player's head; it does nothing for the hits that rotate players’ heads, the ones that researchers say should be a cause for alarm.

The problem with these rotational hits is that they cause the head and neck to twist rapidly. "The brain is like a stalk of broccoli, and the flower is the part that gets the direct hit," says Kosofsky. In a rotational hit, the broccoli stalk — the brain stem — can twist, stretching and damaging the nerves there. Injuries associated with rotational hits may be more damaging than a direct hit because they cause the brain to rotate within the skull and the brainstem to twist. There's no way to know how helmets handle rotational acceleration, because there's no established way to test for it.

Right now, all helmets on the market must first go through testing to meet standards set by National Operating Committee on Standards for Athletic Equipment, or NOCSAE. The helmets are put on dummy heads and dropped 16 times from different heights. The idea is to recreate the forces they might experience during a game. There's also an unofficial test called the STAR system, which Duma developed at Virginia Tech. That testing goes one step further, by doing up to 120 different drop tests with the helmets. But the problem with these rating systems is that they only test for linear acceleration; the ratings give no indication of how well the helmets can handle angular forces.

If a helmet gets turned suddenly, it fits so tightly on the head that the head will quickly twist along with it

Today’s snug-fitting helmets help to keep the wearer’s head secure during a game. But they also do nothing to prevent head twists. If a helmet gets turned suddenly, it fits so tightly on the head that the head will quickly twist along with it. To protect against rotational hits, the helmet must have some form of disconnect from the head underneath. "The helmet [must be] designed in such a way that the shell can move freely from the head in that direction," says Blackman. "The ideal thing [for rotation] is like a pot on your head, and the pot spins around, absorbing the rotational acceleration."

The column-like structures connecting the two outer layers of the Zero1. (Vicis)

So what is the solution? A Seattle-based company Vicis has an idea. The startup's four-layer helmet Zero1 is supposed to protect from both direct hits and rotational ones. The Zero1 has an outermost layer that's firm yet deformable, meaning it can bend inward during a hit. This layer is connected to an inner core layer through a series of columns. It's these columns that account for the rotational acceleration. They can bend inward like cushioning does for direct hits or at angle when hits have more of a spin. "Those columns can bend, absorb the force, and redistribute away from the inner liner. Then that structure can recoil and come back into position," says Samuel Browd, one of the founders of Vicis and the medical director of Seattle Children’s Sports Concussion Program.

The Zero1 hasn't been independently verified yet, but Browd says the company is working on getting certified through both NOCSAE and the Virginia Tech team. The team also has a pendulum they use to test the helmet; it involves a large weight that swings down at an arc and hits the helmet on a dummy head, to simulate what a rotational hit might look like on the field. "We're trying to optimize against both types of forces that the helmet will see," says Browd.

Rule surrounding the kickoff have been changed. (Wikimedia)

Even if the Zero1 proves effective against direct and rotational hits, it will still be impossible to protect against all head injuries in football. It’s a contact sport that relies on tackling other human beings to the ground. At some point, someone’s head is going to get hit or twisted.

It's also still unclear exactly how forceful of an impact is needed to cause a concussion. Every athlete is different: some heads require an extremely fast and hard hit for concussive symptoms to occur, while others can show injury after much lighter impacts. So even if a helmet can reduce the force of a hit by up to 50 percent or more, that may still not be enough for some athletes. It may not even be concussions that are the most harmful to players. Studies have hinted that the accumulation of repeated head hits — ones that don't result in outright injury — may be just as harmful for the brain in the long-term.

That's why many have turned away from redesigning the helmet to redesigning football instead. Numerous changes have been made to the game in recent years to reduce the possibility of players colliding at high speeds. "Head-down" tackling has been banned to protect athletes' heads, while the NFL voted a few years ago to move the kickoff line from the 30-yard line to the 35-yard line. That way, players have less distance to travel to get to the other side of the field. "That’s a play that has the highest likelihood of concussion, because everyone is running at full speed," says Kosofsky.

Helmets aren't the only way to protect football players from concussions; rule changes matter too. But there is still room for improvement in helmets; adjusting for twisting hits seems like an obvious place to start.

Correction: A previous version of this article stated that helmets are tested by NOCSAE. The helmets must instead meet safety standards set by NOCSAE.