People usually go camping to relax and get away from the stress of city life, but I’ve always found it to be terrifying. It’s not the bears or the fires that scare me — it’s the silence. When you’re used to the steady murmur of traffic and people and all of the other noises that come from urban life, a quiet evening in the woods feels alien. Every sound — whether it’s the crackle of the fire or an animal off in the distance — becomes thundering. I’ve read enough detective novels to know what happens in the woods at night. The quiet isn’t something I’ve ever gotten used to.

Similarly, I originally imagined that playing Firewatch — a new adventure game about being a fire lookout in a national park in Wyoming — would be relaxing. I thought the peaceful surroundings, rendered with a dreamlike quality by artist Olly Moss, would be a soothing change of pace from the brown and grey found in most blockbuster games. And it starts out that way, with solitary treks through the woods that feel almost meditative. You’re able to enjoy nice talks with your supervisor over the radio, and everything feels serene. But eventually things take a turn for the sinister.

It’s then that you realize that being out in the wilderness makes you vulnerable, and that the seemingly tranquil setting is actually perfect for terror. 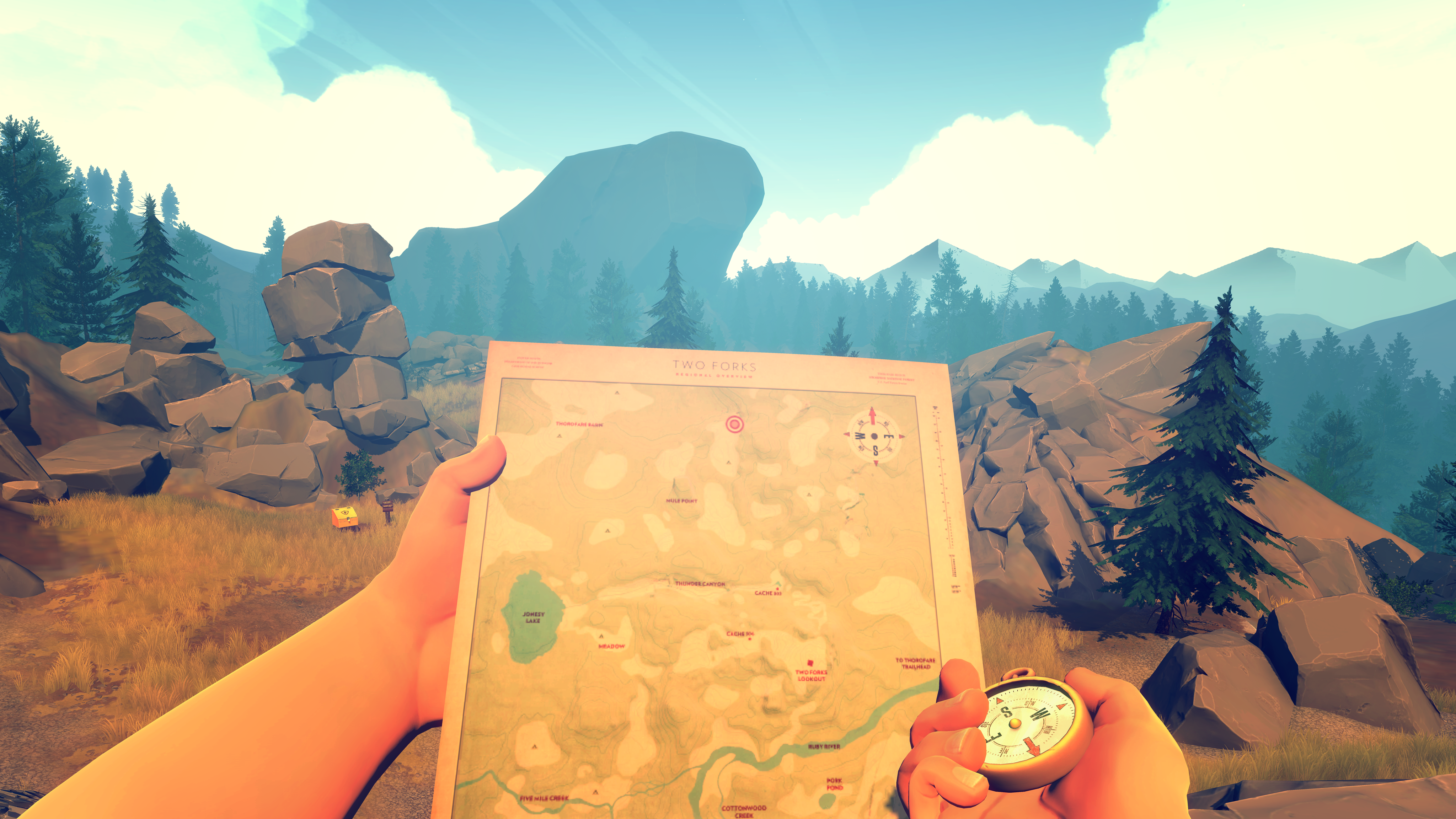 Firewatch stars a man named Henry, and the beginning of his story plays out a bit like a text adventure crossed with that depressing opening sequence from Pixar’s Up. Words flash by on screen, telling you how our lead met his wife Julia. You’ll learn about their courtship, their life together, and at certain points you’ll be able to make choices, deciding what Henry does or says at key points. You even get to choose which dog they adopt. Eventually you learn that Julia is very sick, and that Henry maybe isn’t the right person to look after her. She goes to live with her family in Australia and Henry decides to get away from everything and move to Wyoming to become a fire lookout. It’s not the job itself he’s interested in; it’s the solitude.

Conversation is the thrust of Firewatch

The game plays out like most first-person adventures (think Gone Home or Everybody’s Gone to the Rapture). There isn’t a lot of action. Most time is spent hiking around the park, doing various chores. Though Henry is physically isolated, he’s never really alone. At all times he carries a walkie-talkie that puts him in touch with his supervisor Delilah. In the beginning she mainly just tells him what to do, like investigate a downed power line or deal with troublesome drunk teens. The two become close.

There’s a strange kind of intimacy that comes from knowing a person only by their words. Not only is Delilah the voice in Henry’s ear, she’s the only human contact for a stretch that spans weeks. Conversation is the thrust of Firewatch, and when you aren’t talking the air fills with that dreaded, discomforting silence.

Mechanically, Firewatch seems almost dull. You hike around a yawning forested area, using a map and compass to find your way to and from key locations, backtracking over the same areas multiple times. Aside from not getting lost, there isn’t challenge or variation (I have a very poor sense of direction, but only lost my way once during my playthrough). Occasionally you’ll need to search an area for clues, but it’s never tougher than a sporting round of Where’s Waldo. 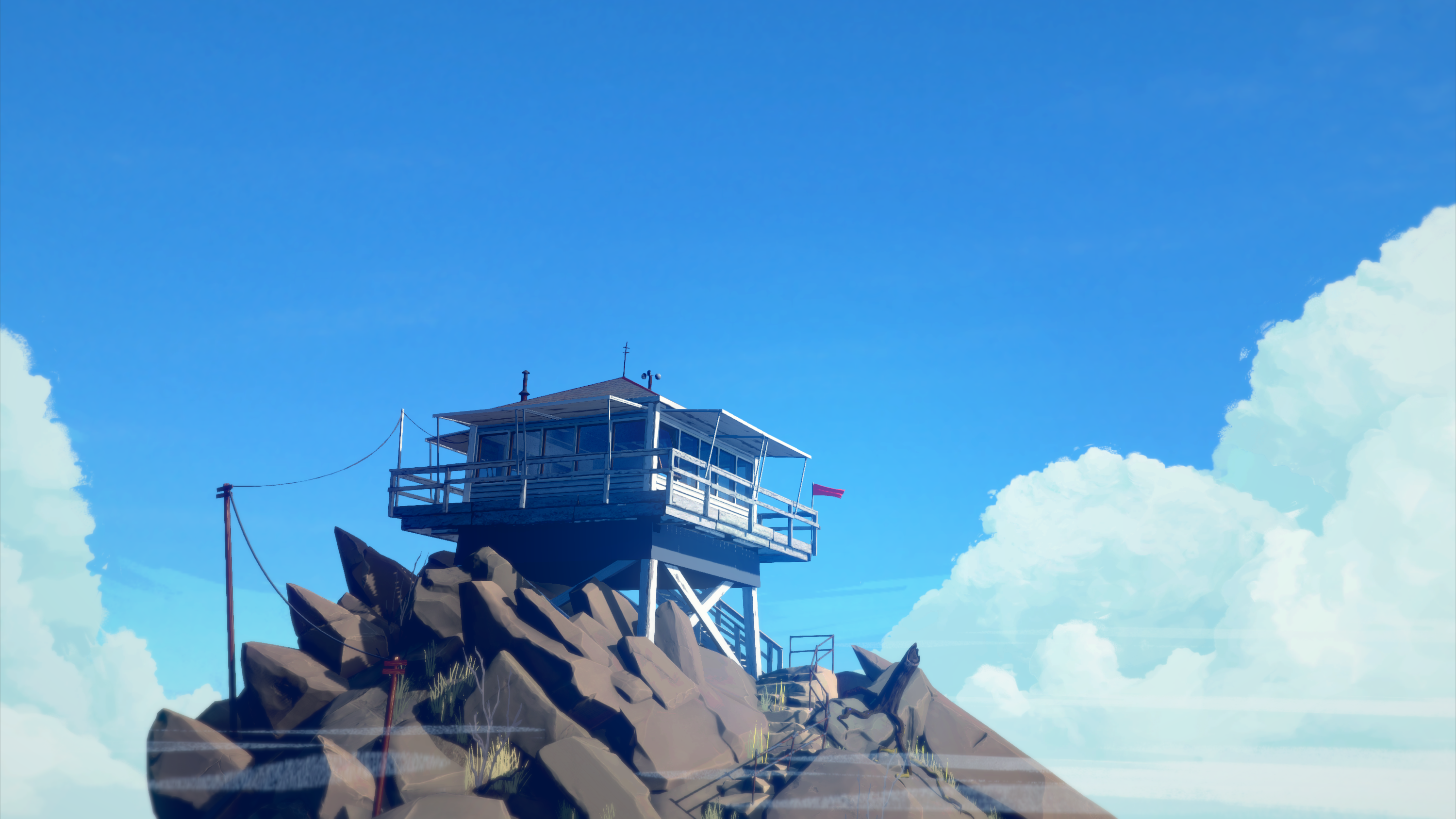 The roteness of the treks perhaps is purposeful. With nothing else to think about beyond the beautiful road ahead of you, your mind can focus on Delilah and what she has to say. Henry is constantly reporting back to her, telling his new colleague about everything from important developments (hey, there’s a fire!) to weird observations (this outhouse looks gross!). Walking and talking, watching the relationship between Henry and Delilah unfold, is compelling. The game often skips ahead days or weeks at a time, but the progression is natural and confident. The two talk about everything, from work to their past. For the five-or-so hours the game lasts, I couldn’t get enough.

I found myself terrified toward the end

You come to trust Delilah — when she tells you to do something, you do it — which only makes the latter portion of the game even more disconcerting. Without spoiling too much, the two eventually realize they aren’t alone, and things take a dark turn. Something strange is happening, and you have no idea what. Given Henry’s solitude and problems with alcohol, I found myself questioning everything — even Delilah. Firewatch is a game that features no real action, yet I found myself terrified toward the end, my heart racing as I ran from one location to the next, trying to piece together clues.

In its finale, Firewatch showcases the two very different sides of nature. On the one hand, the game’s rendition of a national park in Wyoming is breathtaking; I found myself stopping to take screenshots with the fervor of a stolid father testing out his new camera. But the setting, in all of its vast loneliness, elevates a spooky story to downright scary and stressful; it’s not a horror game, more of an interactive thriller.

Firewatch is a game about the quiet of the wilderness, silence, and the sounds that follow it.

Firewatch is available February 9th on PC and PS4.