Google opens an online store for 'books that can't be printed'

Google opens an online store for 'books that can't be printed'

Editions at Play publishes titles designed for your smartphone

"Welcome to our bookstore," reads the blurb for Google's new Editions at Play initiative. "We sell books that cannot be printed."

It's a simple manifesto that marks an interesting foray into the digital arts for Google. Editions at Play is all about exploring the idea of "digital books" — not just ebooks, but books that simply can't exist on static, printed paper. The project launched last week with a pair of new titles: Entrances & Exits by Reif Larsen, and The Truth About Cats & Dogs by Sam Riviere and Joe Dunthorne. The first is essentially a point-and-click adventure game in Google Street View, while the second is a "failed collaboration" consisting of Riviere's and Dunthorne's diaries which readers can switch back and forth between.

"These are books that can compete for attention on your phone."

Both books are designed to be read on a smartphone (but also work on the web), and are short reads — around 30 minutes for Cats & Dogs, and about an hour for Entrances & Exits. This length combined with the books' slick presentation makes them seem accessible (perhaps even lightweight), but both are fun, engaging reads. You're conscious while poking your way through them that they're experimental objects, but never in a way that crowds out the stories. After all, we absorb so much information through our phones now, pulling and poking through feed after feed, that it's actually nice to experience something that is finite and structured by comparison.

For Dunthorne, this problem of attention is one of the challenges that digital formats have to face. "[There's] a contradiction about reading an immersive story on your phone, a device designed to distract you from being immersed," he tells The Verge by email. "But that’s a contradiction we have to tackle, and think around, rather than trying to retreat into the printed page." He adds that he even pays for an app that stops him using the internet too much, "which is about the most absurd thing in my life." 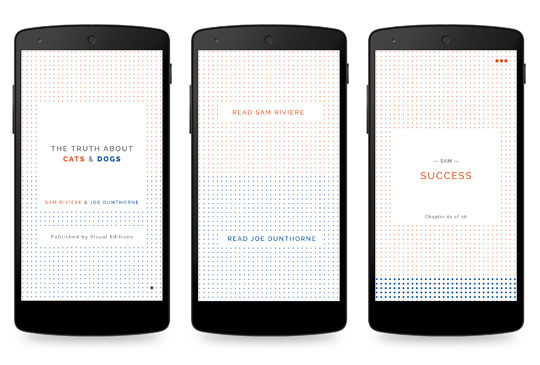 "A book that takes sides" — The Truth About Cats & Dogs by Joe Dunthorne and Sam Riviere.

Google is also interested in this problem of engagement, and cites the declining use of e-readers as evidence that the frontier for digital books has moved. "Phones offer countless new ways to construct narrative and read deeply," says T.L. Uglow of Google's Sydney-based Creative Labs, which created the initiative along with London-based publisher Visual Editions. "These are books that can compete for attention on your phone via incredible, dynamic literature."

Using technology to tell different types stories is not a new idea, of course, but the problem has always seemed to be finding the right medium and the right style of presentation. For example, although academics discuss "ergodic literature" where a book's narrative is created in part by the reader, the average reader would be more familiar with choose-your-own-adventure books, or early PC text adventure games. They have the same concept and use the same narrative tools, but the latter has popular appeal and, perhaps more importantly, a readership. The same can be said of video games, which have experimented with all sorts of non-standard narratives. And perhaps, for a younger generation, the gap between the often lifeless academic conception of digital literature, and the pop culture reality isn't so large.

"It’s more a question of: why is this taking so long?"

"As someone who grew up playing computer games, who learned how to write by writing computer games, there’s no feeling that a digital story is a betrayal of literature's inner purity," says Dunthorne. "It’s more a question of: why is this taking so long? I always think of Douglas Adam’s wonderful Hitchhiker’s Guide text adventure game, which is just a masterpiece, full of hidden pleasures that you feel you might be the only reader to discover." He adds that while there have been a few successes in storytelling in the games industry, the standard of writing for most triple-A titles "remains, with a few exceptions, utter shit."

Google's new initiative theoretically has the power to push these more considered digital storytelling experiments into the mainstream. In addition to the two launch titles, Editions at Play has two more books in the works: a collection of science-fiction and science essays and short stories named Strata and a book titled All This Rotting — a text that tells the story of the "deteriorating state of a father's mind," falling apart on the screen as it's read. The Editions at Play website also catalogs digital books by other writers, and is home to a number of back-of-the-napkin concepts that blur the lines between books and abstract art. There's the idea for a book that physically grows, for example, by monitoring slime mould in a petri dish to trigger tweets telling a story.

These concepts might represent a different sort of problem, though. With digital formats there are simply too many possibilities for what an author or artist can create, and the result can sometimes be a lack of discipline in the stories that get told. Both Entrances & Exits and The Truth About Cats & Dogs are restrained in this regard, but some people might think the ideas on the Editions at Play website are best staying as concepts.

Dunthorne says that publishers have only just begun to explore the possibilities of digital books, but thinks that initiatives like Editions at Play are helping — especially for writers like him who don't necessarily have the technical skills to create such slick packages. "Digital publishing has always felt to me like the great untapped frontier. But it’s difficult to create interesting work because it requires so much expertise," he says. "I think that, at some point, someone will create a digital book that completely makes sense of the format, and then the gates will open."