The Division let me kill virtual people just outside my office

The Division let me kill virtual people just outside my office

I had taken the walk east on 36th a few hundred mornings before I stopped to kill a man. The act was in self-defense, mostly. He pulled a gun, I pulled a gun, one of us left alive and a little bit richer — I scavenged his corpse for supplies, as is the fashion in The Division.

The new shooter from Ubisoft, hung on the Tom Clancy brand of military and espionage thrillers, branding rights for which they paid undisclosed millions, is set in a lifelike model of Midtown Manhattan. Dumbo, a neighborhood in Brooklyn, was the original setting, actually. A video tour of the digitized, cobbled street that slopes toward Brooklyn Bridge Park announced the game a few years back, but like that neighborhood's residents, the game has moved to more affordable zip codes. Namely, the one where I worked for three years.

Now, I’ve obliterated millions of video game goons in my time, but I anticipated The Division for the opportunity to answer the question: does it feel different slaughtering a virtual person in a recreation of where you take lunch?

A tale of untrue crime

I myself moved to the cheaper real estate of Austin, Texas last spring, but from 2013 to 2015 I woke up every weekday, clutched a cup of coffee in the West Village, and strolled up 8th Avenue, past the low rises of Chelsea, the post office on 31st with the byzantine columns and terrible service (1.5 stars on Google), and Madison Square Garden with the hideous architecture and terrible basketball team (23-39 on ESPN). At 36th Street, I’d hook right towards 6th Avenue, where I cut left to Vox Media’s headquarters. The path was so rote, that I often made phone calls or played mobile games, only looking up every quarter mile to make sure I hadn’t been run over by a cab.

The Division begins, in its beta, by cribbing the tail of my commute, starting from the post office, which finally has been put to good use as the de facto staging ground for a team of health workers, soldiers, and scientists fighting a disease that has left this chunk of Manhattan abandoned but for patrols of street gangs with an endless supply of automatic weapons and crisp baseball caps.

Now, I can recognize that the creators of The Division probably didn’t purposefully turn my commute into a shooting gallery. I cushion with "probably," because I’ve been added to a Ubisoft game in the past, without consent, as a hemorrhoid cream-buying part-time manager. So probably not, but maybe? 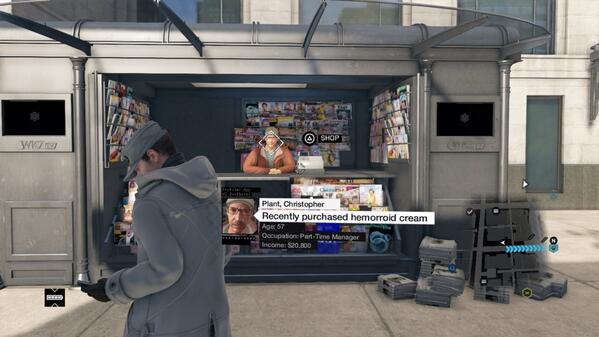 From the federal building, you head eastward along the south side of The Garden, crossing through a row of ill-kept storefronts and massage parlors that reflect the monstrosity of a stadium that provides them shade. Shortly thereafter you reach a quarantined zone — the middle of Midtown, a gated amusement park you could say, where players are welcome to "go rogue," murdering one another for hard-earned loot without the interference of the police — and in that quarantine is my old office, where just nearby I scored my first kill.

The Division’s drollest commentary comes from the art directors that underplayed the post-outbreak grime. Real Midtown’s dirtiness, you’ll know if you’ve suffered it for days at a time, is already apocalyptic. And so, ironically I suppose, The Division’s depiction of abandoned Manhattan is indistinguishable from the real thing, on those days in winter when the snow drifts become too high for trash trucks to collect, turning stacks of frozen black bags into makeshift barricades. The stacks of in-game detritus, fittingly, provided necessary cover when the stranger tried to gun me down, a repayment for years of leaking smelly goo into the gutters, congealing until spring, when it’s safe for street cleaners to return Midtown to something slightly better than crowded stinkhole.

I admit that in recent years I’ve been nauseous while playing certain gory video games. Violence against virtual bodies, bodies that look, bleed, and die with real-enough-to-fool-you physics, was a highlight of my vindictive teenage existence, but something changed on the road to 30, and now I take no pleasure in watching a lifelike figure lose control of its appendages, collapse to the pavement, and drown face down in a puddle of its own blood.

An acquired taste, like the work of Rob Zombie

This week, I made my best effort to play Dying Light, a first-person zombie game that lets you dismember the undead with blunt weapons that numbers of my colleagues adore. Their praise is warranted: the game, which receives a major expansion this month, is lovingly crafted with details that emphasize the internal rather than the external, like when the camera warps into an X-ray view of the zombie’s skeleton, your weapon splintering the bones with the sound of someone stomping on a full can of Pringles. Dying Light is technically impressive, but like Rob Zombie films, sponge cake, and Journey’s Greatest Hits, my enjoyment is impeded by my queasiness.

For this reason, I approached The Division, and its onus to slaughter normal-looking people on a photorealistic mockup of where I used to take lunch, with an attitude best described as "well, screw that."

This is virtual New York tourism more than any other video game since Grand Theft Auto IV’s Liberty City, and is markedly the more lifelike of the two. The Division’s facsimile is so believable, that when a specific barbecue restaurant wasn’t where it should be, I became agitated. Who allowed for this illusion-breaking inaccuracy? Don’t get me started on the appearance of gas stations, which in the real Manhattan are hidden in corners of the west side that are 30 minutes on foot from the nearest subway stop. And where are the shops that sell nothing but fake flowers? There should be like 50 of them between West 31st and 39th.

These discrepancies bother me far more, I’m ashamed to say, than unloading a submachine gun into a man on all fours, crawling toward help he’ll never reach. To be clear, he’ll never reach it because I murder him. As it should turn out, I like the bloodshed. Killing video gamers in virtual New York while they tell me to stop "being a dick" over their headset is probably, no, definitely my favorite video game experience of 2016. So far.

In the fictional New York streets, I’ve discovered a seemingly arbitrary personal limit to what I do and don’t enjoy about video game aggression: I can brutalize people who look like my friends in lifelike recreations of places I’ve lived, so long as those bodies remain closed. But when a head or a limb comes loose, my stomach follows.

I’m curious how common a barrier of violence is for people who play games. Do you have a limit to video game violence? Do you find that it moves over time? Or are you still waiting for the release of Thrill Kill? Let’s talk it out in the comments.

The Division will be available March 8th on PC, Xbox One, and PlayStation 4. These impressions come from a recent beta.